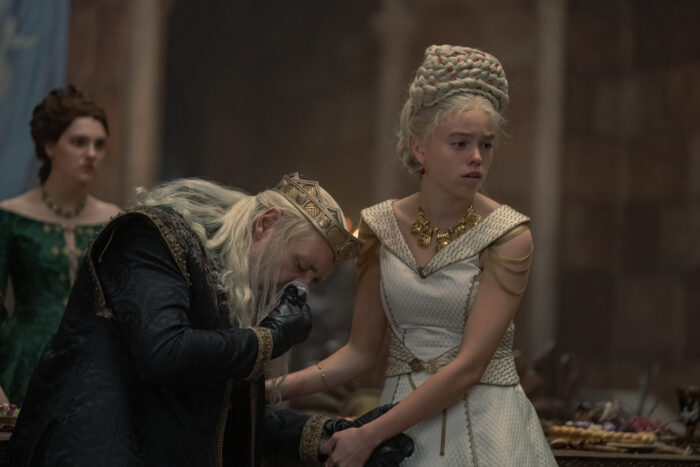 Knowing good and damn well that a wedding is going to be featured in the next episode from the world of GoT/HotD likely either gets you horribly turned off or completely hot and bothered. Doesn’t matter… you’re going to watch it anyway.

You know why? Because it’s like watching a video with a vehicle stuck on the train track. You already know exactly what’s going to happen, yet you wait to see the carnage and exactly how it unfolds.

That’s exactly what is wrong with this world too. Disaster is imminent. Watch, forward and share!!

Yes, a man was unnoticeably absent last week and excuses are expected at this point. What can I say? Sometimes life gets in the way.  Apologies to the lovely yet demented people who look for this column every week.

But it might have been a blessing in disguise. Last week’s episode, alternately titled, “King of the Narrow Nether Regions” was kind of like Fight Club in the sense that it follows rule #1 of Fight Club.

What is rule #1 of Fight Club?

We do not talk about Fight Club.

Oh, you feel entitled to a recap anyway? Fine.

Rhaenyra plays the Westerosi version of the Dating Game.

Ryan Gosling as Ken from the new Barbie movie arrives in King’s Landing.

Viserys falls for whatever his brother is really up to because he’s probably a new man because of the haircut.

Alicent tells Rhaenyra, “Stop your fucking complaining, PLEASE. I had to marry your old man for crying out loud.”

Rhaenyra finds a map and some clothes that smell like dragon I suppose?

There’s also no need to shower before venturing out into the Westerosi nightlife. It’s pointless.

We are reminded that theater productions in this world are not on the level of Hamilton.

Viserys has his bath and decides he wants to Shoop.

Alicent has something on top of her that looks like the back of an Afghan hound.

It keeps moving up and down.

Alicent is clearly not silently singing to herself, “don’t know how you do the voodoo that you do so well, it’s a spell hell makes me wanna…”

Daemon almost puts the incestuous bread in the oven.

Rhaenyra gets served tea the Supreme Court would most likely vote against.

And here we are, lighting the way… 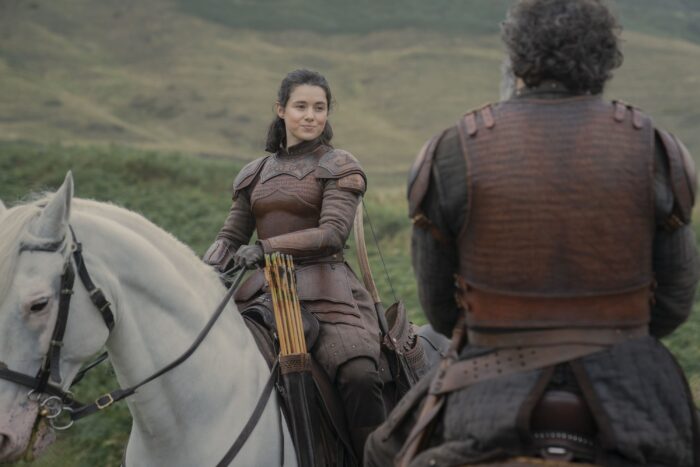 First up, we finally meet the ugly horrible woman Dameon is married to except she’s a looker and would probably kick my ass in under three minutes. You couldn’t see this coming a mile away… everybody keeps giving Daemon hell about already being married. Problem eliminated.

We barely knew you, Rhea Royce.

Viserys forgets the Dramamine and soaks the deck with regurgitated Folgers and breakfast scones. Seriously, how long is this guy going to live? Not that I want him to die because I actually like the character. But damn… every episode something new. Herpes Simplex 10, y’all. 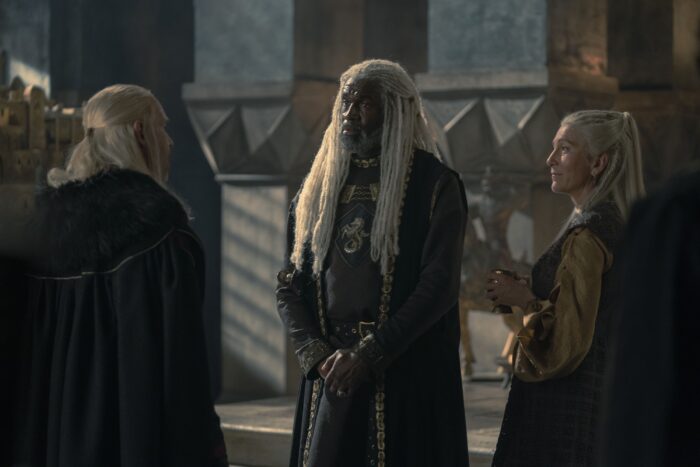 Corlys agrees to the marriage after he and Viserys play their version of, “Whose Last Name is it Anyway.” Rhaenys tells Corlys that hey, we don’t need this shit. And you know what? She’s right.

Here’s your reminder that Ostracized Otto ain’t done yet.  He and Alicent meet up where he warns her about the coming issues surrounding Aegon and/or Rhaenyra after King Spews-A-Lot croaks. And you know what? He’s right.

Quick preview of Titanic 2: Dragon Boogaloo where Criston confesses his love and tells Rhaenyra that he knows this cute little island off the coast of Essos where they can sip Pina Coladas and get caught in the rain. While 99.9% of the viewing public would probably take him up on that offer, Rhaenyra opts for the hazardous chair even though she and Laenor have already made a deal about seeing others given their respective “tastes.” 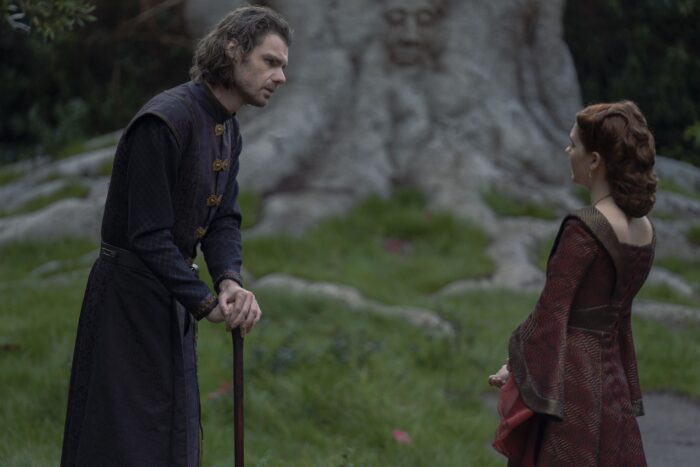 Alicent runs into one of the Strong kids who mentions the forbidden Supreme Court tea Rhaenyra may or may not have consumed after she may or may not have done the dirty with Daemon or Criston the Piston.  Gossip aside, the Strong family seems like the most intelligent people who ever roamed Westeros at this point.

When confronted, Criston admits to something he probably didn’t need to. Alicent then learns the truth, feels jaded, and precedes to don the jade.

Time for the main attraction kiddos! 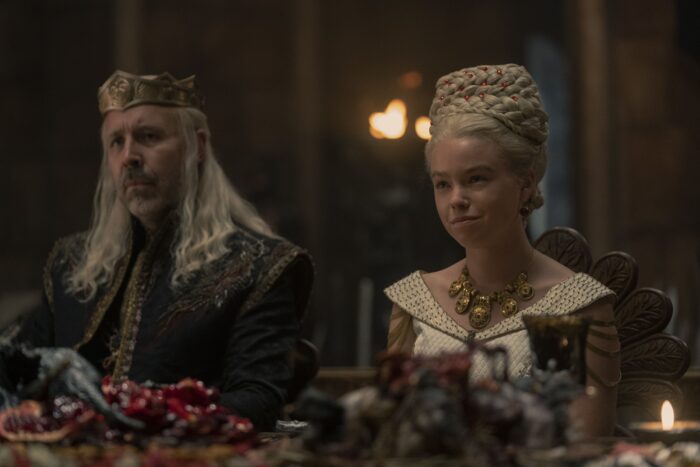 In all seriousness, I love the way this pre-wedding party was shot. The tension was there from the beginning from the way it was directed and likely because we know these things are an aforementioned train wreck.

Fashionably late, Daemon Bieber quickly gets shuffled down to the end of the table and threatened by the dude who knows that ex-wife Rhea didn’t just fall off a horse. He later hooks up with the slightly-aged Laena in what is likely his answer to the coming nuptials.

Not to be outdone, Alicent makes her late entrance wearing green which none of us non-book readers would have thought anything about until there is mention of the color and that it may be an indicator from House Hightower. Otto and the plotto. 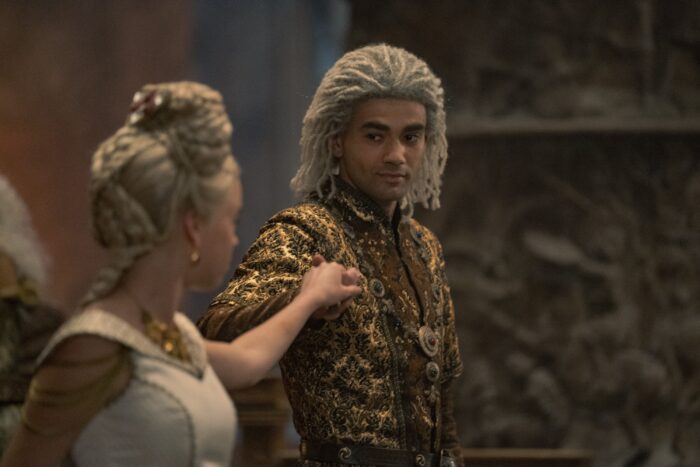 Ah! The first interpretation of what would eventually become the Cha Cha Slide. Magnificent.

Laenor-lover Joffrey (never trust anyone named “Joffrey”) realizes that LLCC (Ladies Love Criston Cole) is the man behind Rhaenyra’s true passion and precedes to go over and talk smack to a fit guy wearing a bunch of armor and trained to fight. Smart. 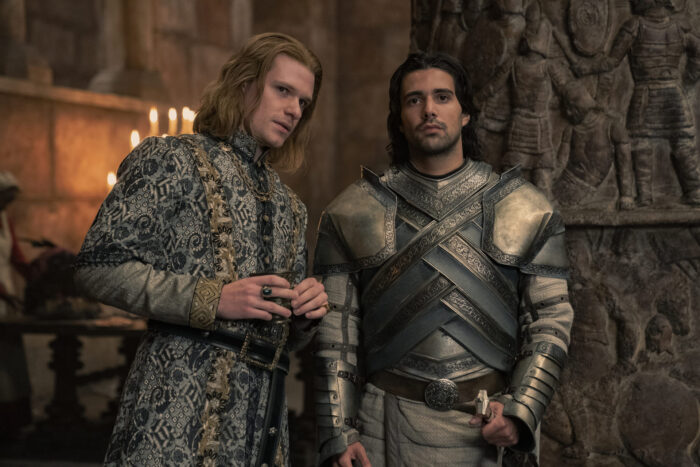 Tension builds. Daemon finds Rhaenyra on the disco-round stressing out Viserys and Jesus… can’t we just let the King have one worry-free evening before he bites the dust?

And then whammo… freaking chaos. I don’t know if Joff said something else or if the stress of the situation overtook our knight in shining, but Criston turned his head into a deflated beach ball. The King forgot to take his Xanax and crashed out once again and now the whole f…ing week is ruined.

Viserys says the hell with it all, scraps the plans, and makes the two tie the knot immediately. Alicent talks Criston into anger-management classes as opposed to self-imposed death and this show, after a kinda “meh” episode last week, really got pretty damn intriguing.

Initial Thoughts: I’ll be honest… last week’s episode really didn’t do anything for me at the time, even with all the flesh, and was almost purely a necessary precursor for what was yet to come. But the payoff we got with Episode 5 made it completely worth it and was, in my opinion, the best ep. yet.

The preview looks like we will be making a major jump in time considering the aging and the change in actors. But that’s the way the House rolls… skip the unnecessary day-to-day meat and jump right into the dessert.

And through it all, somehow or another, Viserys is still alive. Those leeches man…

See you all next week and thanks for coming back by! Until then, enjoy your week, press on, do something kind for someone, and may there always be peace in your realm.