GoT Round up: Jack Gleeson returns to acting, Benioff and Weiss set to cameo in Westworld and more! | Watchers on the Wall | A Game of Thrones Community for Breaking News, Casting, and Commentary 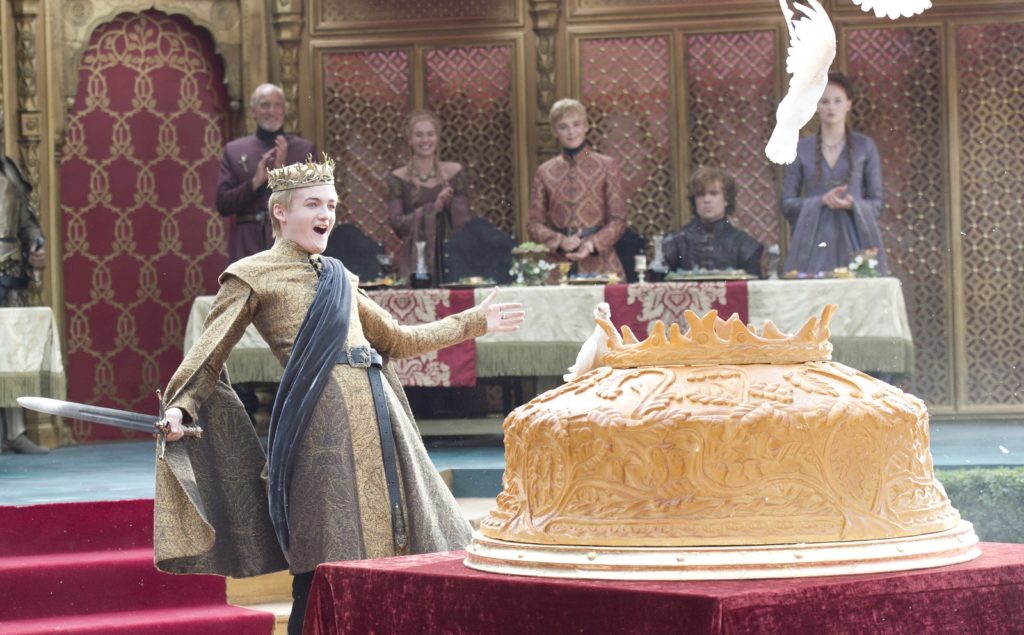 The King has returned! It’s been announced that Jack Gleeson is returning to television for the first time since Joffrey bit the dust in 2014 and that David Benioff and D.B Weiss will be appearing in Westworld season 3! In interviews Sophie Turner reflects on the legacy of Game of Thrones and Emilia Clarke reveals the Targaryen themed Christmas gift her brother “acquired” for her.

Though he will likely always be best known for playing Joffrey Baratheon, The Wrap reports that the 27 year old Game of Thrones alum is going decidedly against type in the upcoming British comedy, Out of Her Mind, which the BBC press release says “subverts the traditional sitcom format by combining eccentric characters, animation, and scientific explanation.”

Gleeson has yet to give an interview in which he explains his return to acting. When he left Game of Thrones six years ago (yes, the Purple Wedding was that long ago), Gleeson spoke as if acting was something he intended to leave behind. At the time he told Entertainment Weekly that he simply wasn’t enjoying acting as much as he once had.

“And now there’s the prospect of doing it for a living, whereas up until now it was always something I did for recreation with my friends, or in the summer for some fun. I enjoyed it,” the then-21 year old said. “When you make a living from something, it changes your relationship with it. It’s not like I hate it, it’s just not what I want to do.”

It appears that Gleeson has changed his mind on the matter and I, for one, am very glad that he has.

In other news, Sophie Turner recently spoke with Elle and discussed her upcoming series Survive … and admitted that she still hasn’t watched the ending of Game of Thrones.

“I started watching when the last season started and I was planning to watch the rest,” she said. “But then I fell behind. And then I started reading all these comments online …”

When prompted by her interviewer for an opinion Turner simply said:

“I feel like you are never going to have everybody be satisfied with the ending. Especially a show that’s been going on for almost 10 years at that point. People have so many ideas of how they want it to end. You can’t make every fan happy.”

However, Turner did speak about the experience of being on such a ground breaking show with pride.

“Pretty much since season three, we’ve been hearing, ‘Game of Thrones! It’s a phenomenon!’ I’ve been trying to, like, comprehend that. But when you’re in it, you can’t see it. Now that I’m out of it, I’m only starting to realize how incredible it was, what a revelation it was for television. I’m like, ‘Oh my God, I’ve been, like, blessed.’ When it’s happening, you don’t realize you’re among greatness: The people I was around. The atmosphere. The way they worked. I was spoiled by that show completely. And I’ll never have anything like it again. Nothing will be the same. And only now am I realizing that.”

In an interview with Metro Emilia Clarke revealed the very, very sweet Christmas present her brother … eh, retrieved for her from the set of Game of Thrones.

Lastly, The Wrap has reported that David Benioff and D.B. Weiss will cameo in Westworld, season 3 episode 2, playing technicians at Delos, the company that created Westworld and other host-populated fantastical theme parks.

It’s … kind of a fitting role for the showrunners of Game of Thrones, if I do say so myself.