Well, we tried to wait it out and see if the actual video would turn up today, but no dice so far. So, we’re diving into the quick and dirty screencaps and seeing what we find!

Last night, it seems that a new teaser or trailer for Game of Thrones season 6 aired on TBS during the basketball game, around 10:40PM Central Time. Luckily our friend Manu happened to be watching the game, and managed to catch several images from the trailer and jot down a description of the action happening onscreen.

We’re going to be sharing Manu’s screencaps below (with his permission), along with descriptions, speculation and thoughts, so if you’re spoiler-phobic, this is where you check-out, because there’s some good stuff here!

Update: This video version has surfaced finally! We’ll keep looking for a better version but it’s great to have something!

The trailer’s dialogue/voiceover appears to include three notable sections of dialogue. First, Tyrion, speaking his line about “the great game” that was featured in the first trailer. Then, the High Sparrow speaks with Tommen. Manu believes it was a new line of dialogue. The last half of the trailer was a Jaqen H’ghar voiceover, speaking of giving the gift and adding to the wall of faces. There may have been more small pieces of dialogues throughout. 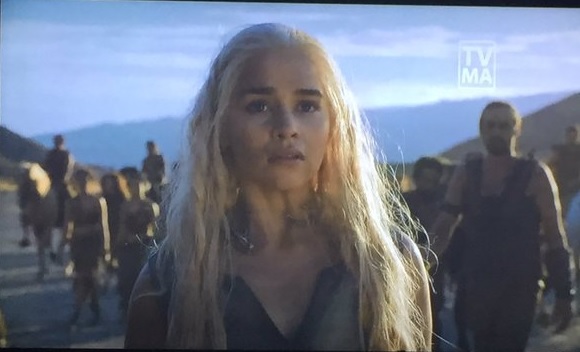 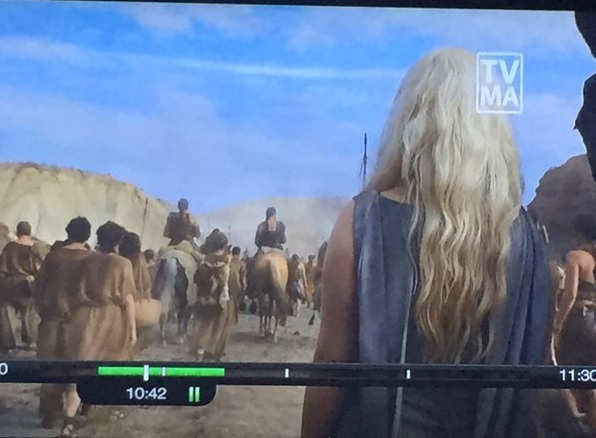 Tyrion, Missandei and Grey Worm in the throne room in Meereen: 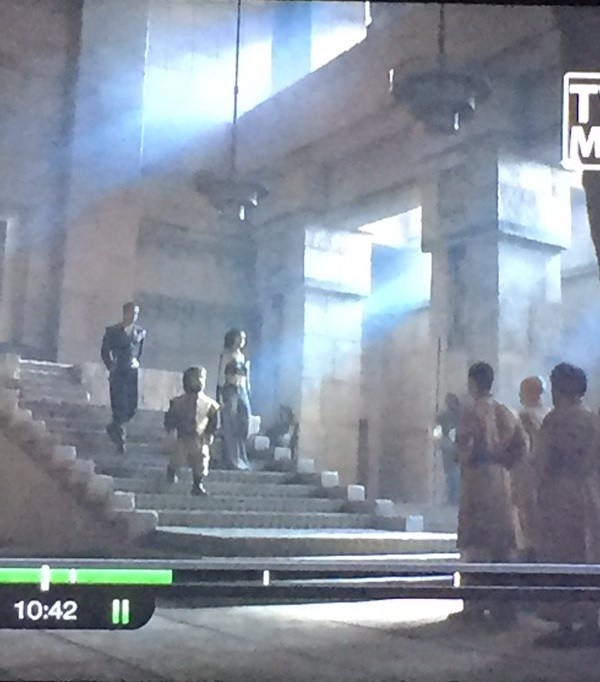 Next we see figures running in the snowy woods, including Sansa and most likely Theon, just after their escape from Winterfell: 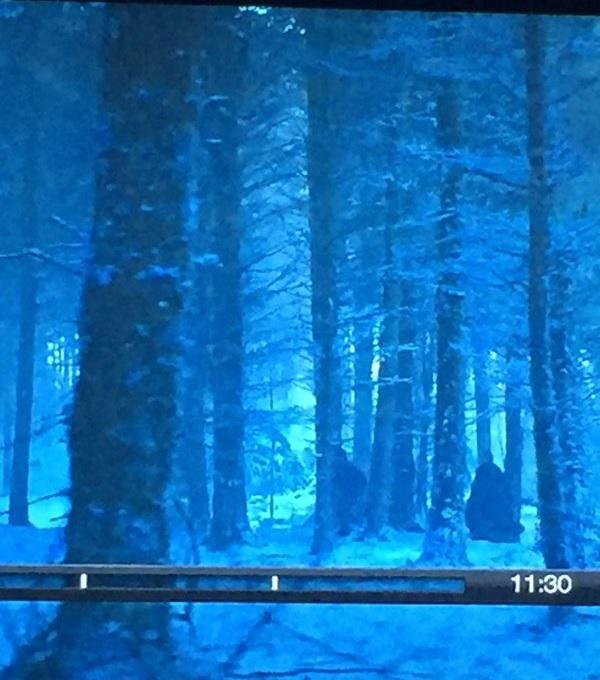 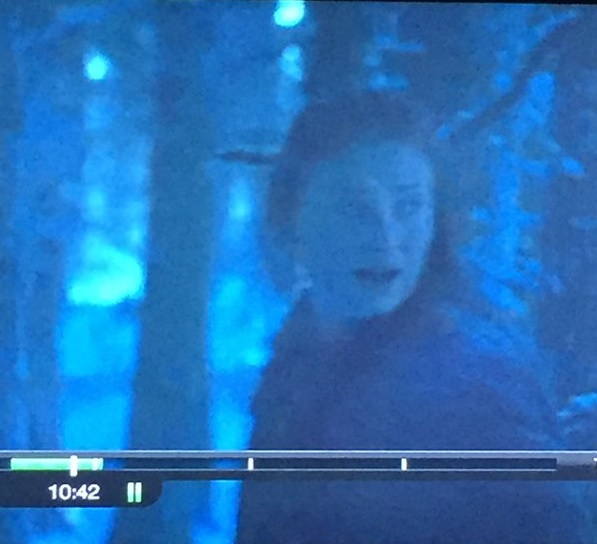 The High Sparrow with Tommen: 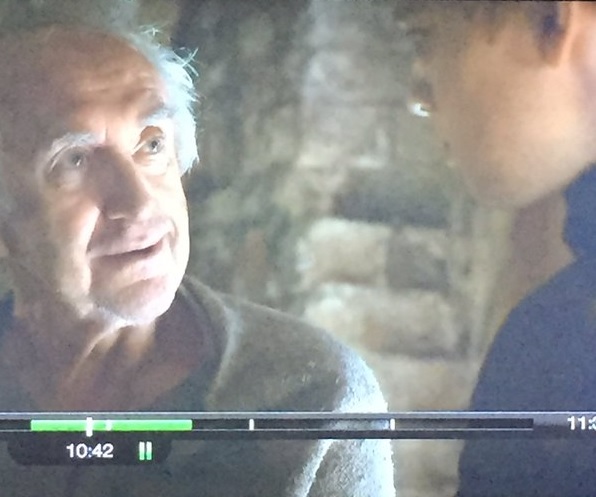 Jaime on horseback, surrounded by Tyrell soldiers. People who have been following spoilers know that this is from the big scene filmed in Girona, involving Margaery. 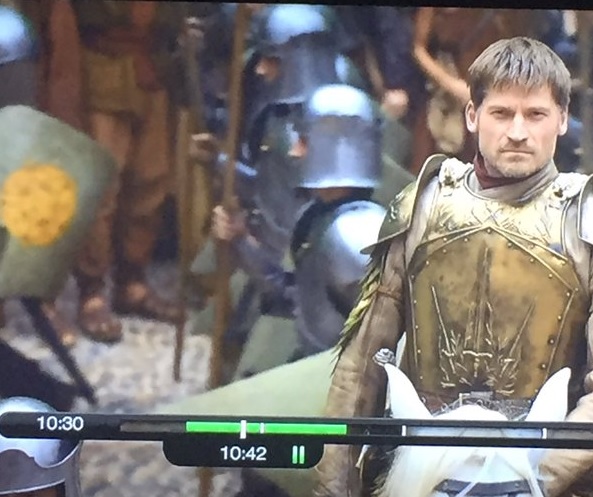 Brienne attacking men, while on a horse. From the snowy-Northern-forest look of things, this is connected to Sansa and Theon’s scene; she appears to be rescuing them! 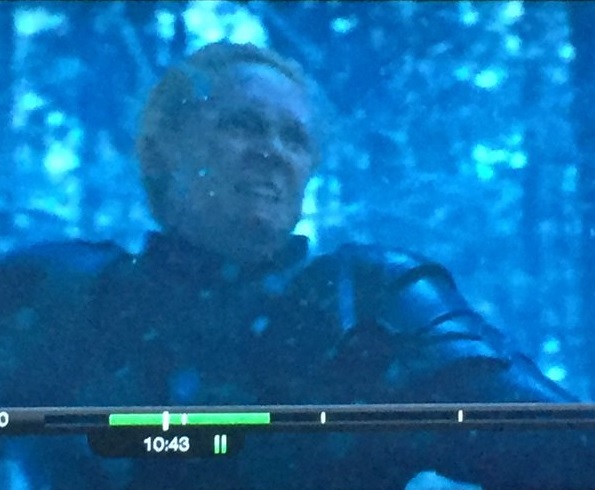 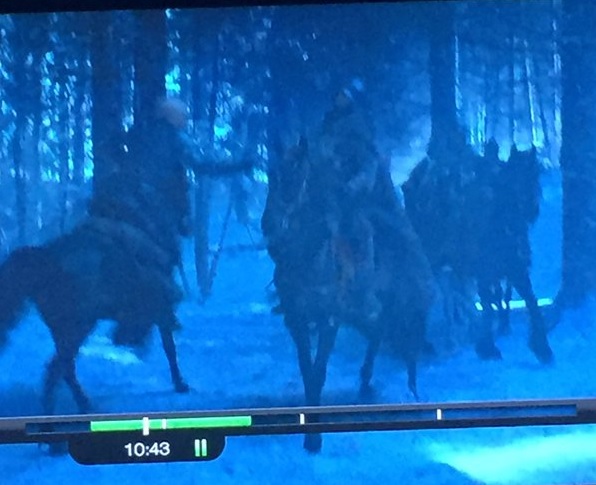 Drogon flies over the Dothraki moving into Vaes Dothrak, casting a shadow down on them: 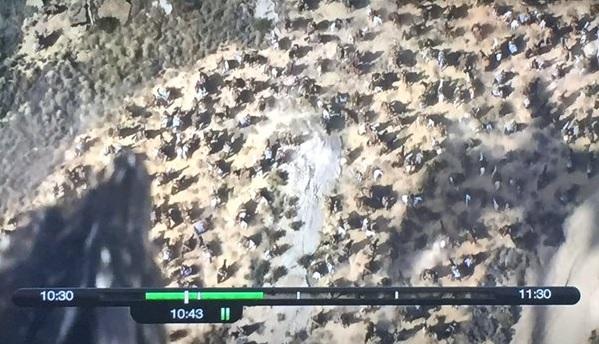 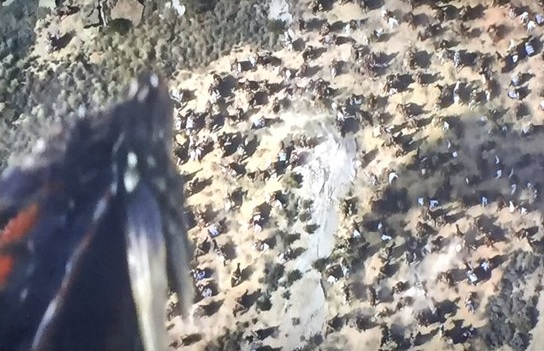 Tyrion- paying a visit to the remaining two dragons, perhaps? 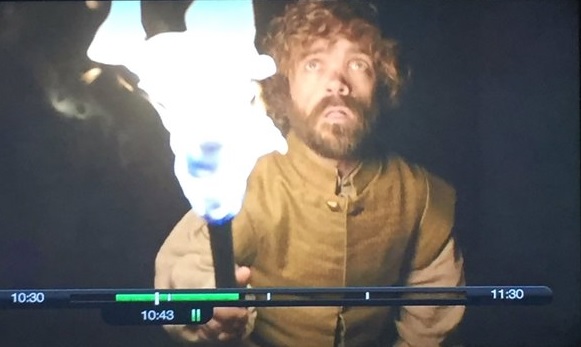 Jaqen H’ghar and Arya Stark, in the House of Black and White. We hear Jaqen’s voice during this: 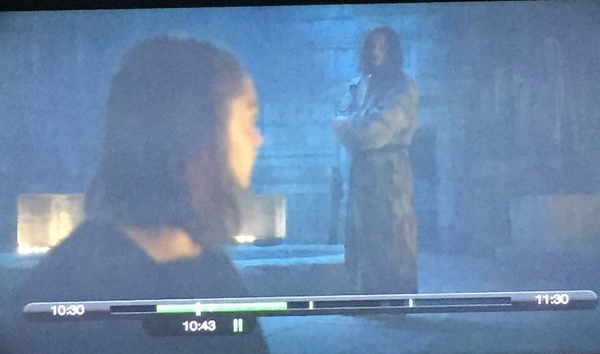 Jaime talking to the High Sparrow 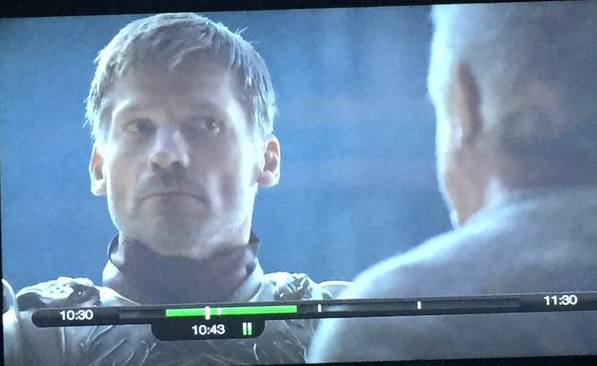 Arya, as a blind beggar on the street 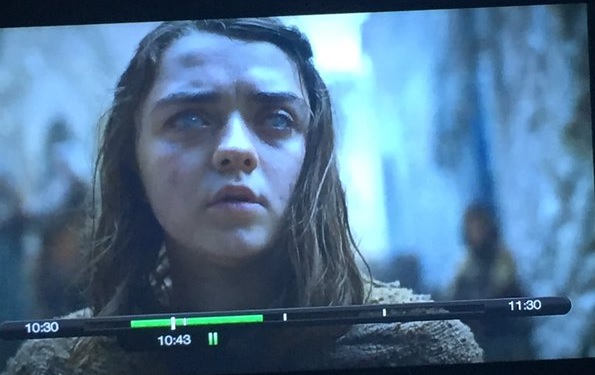 Theon, with someone. I agree with Manu that this is probably his sister Yara. 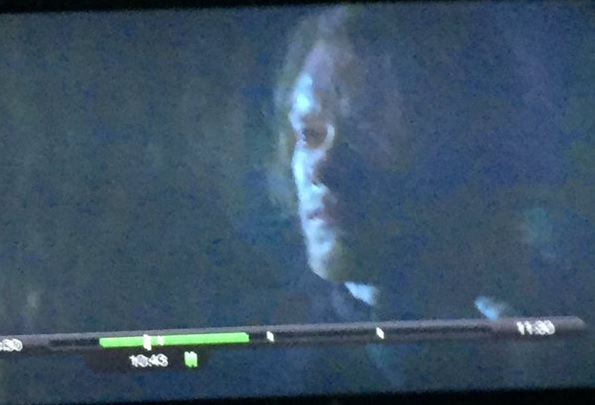 Sansa, while on the run in the snowy woods: 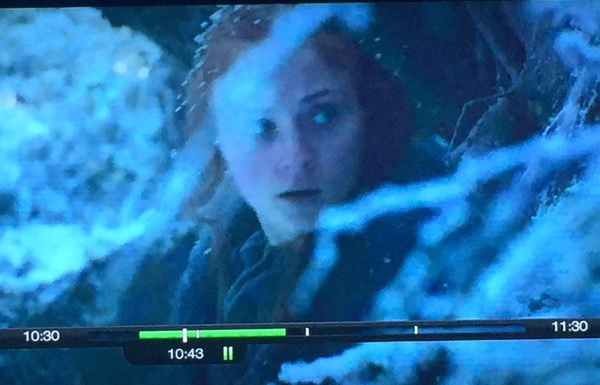 Ramsay, before the big episode 9 battle. Manu tells us he also saw the same shots we’ve previously seen of the burning flayed man and charging horses on the battle field. 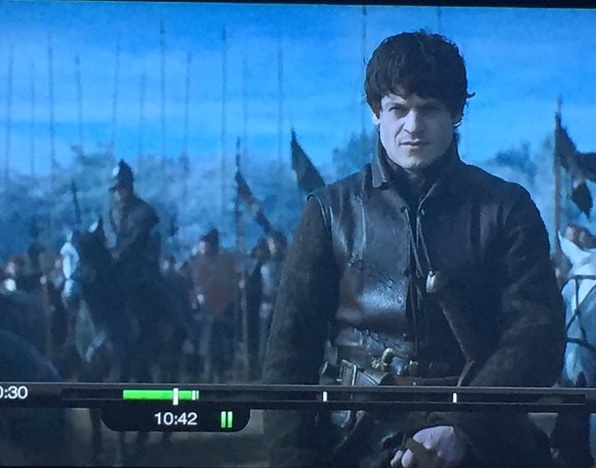 As we reported exclusively back in November,  we get to see a giant paying a visit to the gates of Winterfell! (Edit: Everyone’s pretty confident this shot is of Castle Black, so damn, Wun Wun is going to be busy this season.) 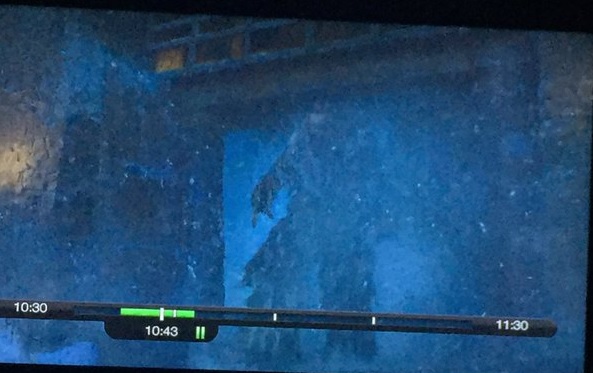 And there’s a quick flash from the Tower of Joy fight scene! Both men that we can see look to be wearing the Stark leather armor (the one on the right more clearly so). I’d love to get a clean look especially at this shot.  The man just appearing in the far left side of the frame seems to have more armor on and is presumably the opponent, perhaps the Targaryen-armored once glimpsed in the first trailer. (Edit: now that we have the video, I can see that these are the three soldiers who are all fighting against the Targaryen-armored knight, who is obscured in the center.) 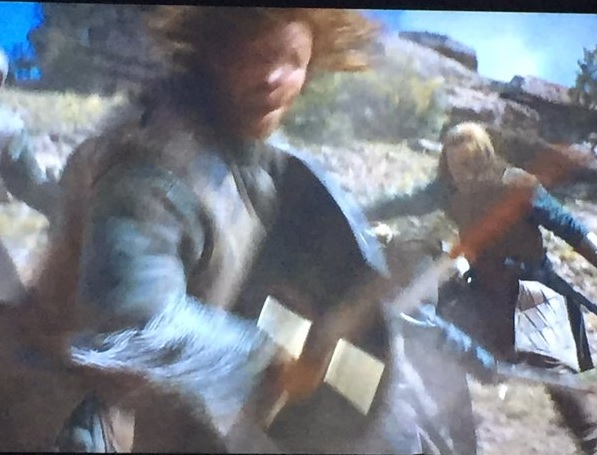 And finally, another incredibly exciting moment: a glimpse of the Night’s King grabbing Bran’s arm! This looks to be part of that moment from the first trailer when Bran turns to see the White Walker king, but we weren’t certain if there would be any interaction, since Bran is having visions. This is getting better and better! 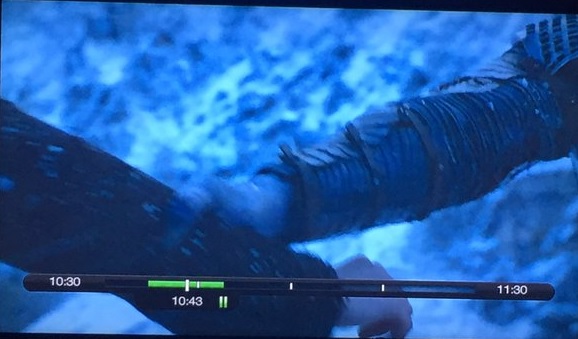 Though the footage was fast, Manu says he’s sure he didn’t see anything of Jon Snow, Davos or Melisandre in the trailer.

Thank you very much for the quick eyes and thorough capturing, Manu! Everyone give him a big thanks and be sure to read his Memory Lane write-up that’ll be posted next Tuesday, when Manu pays tribute to one of season 3’s best episodes, “Kissed By Fire.”

We’ll keep on hunting for the video of this teaser. So far, it sounds like HBO has no plans to release it online but maybe they’ll surprise us?