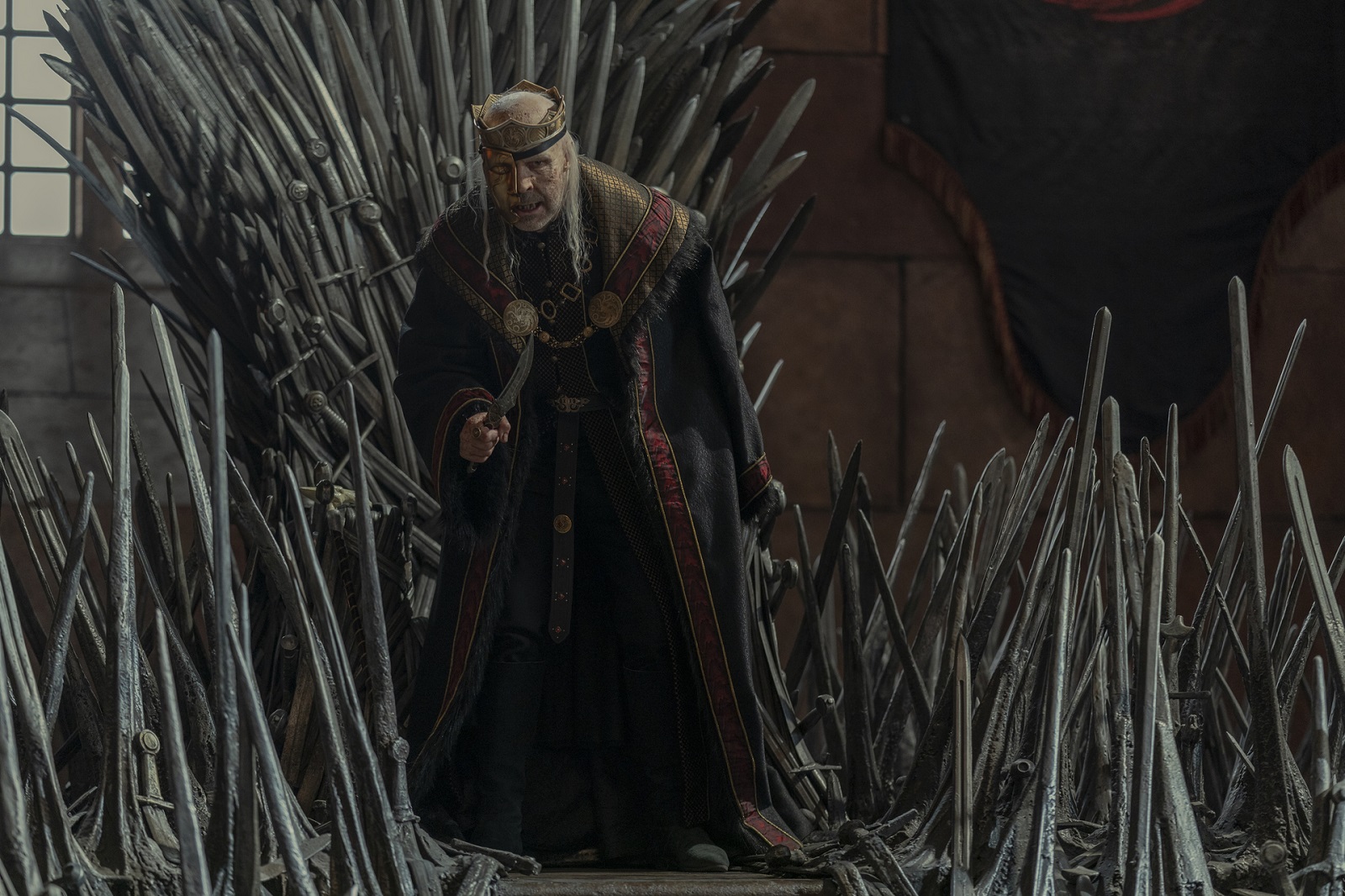 We’re entering the home stretch of House of the Dragon season 1, as we barrel full sped ahead into episode 8! Remember me? It’s me from just last week! Unlike last week, you can physically see me this time, in extremely vivid color, so there’s no excuse for missing out on this week’s review/recap roundup. Every week, for each new episode of HOTD, I’ll be deconstructing the multitude of reviews out there, boiling them down to one short summary sentence that will perfectly encapsulate what the original author was saying, no questions asked…and by that I mean that I will deconstruct whole essays down to one sentence apiece, often quoting them verbatim.

What did the Internet think of HBO’s House of the Dragon episode 8, “The Lord of the Tides?” Hey, here’s a recommendation: Before you dive into any of these other critics I’ve rounded up (pfft – boring! Who would do that/write about that/etc.?), why don’t you check out Sue’s recap of last night’s episode? Once you’ve done that, here’s what the rest of the Internet had to say about last night’s episode:

Alec Bojalad, Den of Geek – In which major characters are given a choice, an off-ramp of sorts, where they have one final glowing opportunity to exit the path to ruin they’ve built for themselves, and that’s what makes for great drama.

Belen Edwards, Mashable – In which the ways by which Fire & Blood was changed on its journey to the screen as HOTD are broken down, most notably in this episode, Vaemond’s death being a major power move and a classic out-of-nowhere Game of Thrones-style death, as opposed to his death via dragon in the book.

Daniel Van Boom, CNET – In which House Targaryen is now effectively split into two teams, and both want one of their players to rule Driftmark.

Glen Weldon, NPR – In which knowing family means sitting with them at a meal, such as an interminable Thanksgiving dinner where you pretend not to hear the stream of racist invective burbling out of drunk Uncle Darryl, you grin too fiercely at Aunt Sherri as she sanctimoniously interrogates any life choice that does not match the precise ones she has made, and you ignore cousin Steve-O’s earnest entreaties to fund his bold multilevel initiative to market a line of bodybuilding supplements that the FDA is “too soyboy cuck” to make legal in the United States and its territories. (I don’t write these; I just report the facts, ma’am).

Helen O’Hara, IGN – In which the show is taking sides and creating a clearer set of good guys and bad guys.

Hillary Kelly, Vulture – In which there’s something unseemly about two young Black women who just smile in the background, as bit players to their betrothed.

Jeremy Egner, New York Times – In which a head has never been so expertly halved on TV or anywhere else.

Jenna Scherer, AV Club – In which it brought all the main players back to the Red Keep for what is easily the series’ best episode to date.

Kim Renfro, Insider – In which Rhaenyra’s brief exchange with Lord Caswell let us know that there are still some people in King’s Landing who are loyal to Rhaenyra as future Queen.

Kimberly Roots, TVLine – In which we all know how things tend to go in this violent, incestuous, power-hungry universe.

Meghan O’ Keefe, Decider – In which the Aegon misunderstanding is all the more infuriating because Alicent and Rhaenyra finally made peace for the first time in decades.

Rob Bricken, Gizmodo – In which these first eight episodes of House of the Dragon have more or less been a prologue for the the rest of the TV series, presumably.

Sean T. Collins, Rolling Stone – In which we must bid farewell to Paddy Considine (King Viserys), who has delivered one of the year’s finest performances as the monarch, and makes his final hours both noble and deeply depressing, a fine encapsulation of the whole character.

Zach Kram, The Ringer – In which the entire procession of Viserys’ entrance, from doors opening through Daemon’s final placement of the crown atop Viserys’s head, is properly tender and a fitting tribute to Paddy Considine’s nuanced performance across the season, indicating that the best scenes of the season so far have centered on people dramatically entering rooms.

Summary: Episode 8’s The Lord of the Tides is the best received episode to date. Paddy Considine has earned much praise, as well as early talk of a potential Emmy nomination. The dinner scene, and really, just any scene with Viserys was lauded, as well as quieter scenes with Eve Best (Rhaenys, i.e. The Queen Who Never Was).

My Review: What a WORLD of difference it makes when you can actually see the episode. It looked sharp, vivid, and was intelligible throughout. The drama is all “the night before” but it is setting the stage for a climactic finale whose ripple effects will ricochet through the off season. This episode was masterfully written by Ellen Shim and superbly directed by Geeta Vasant Patel, and was definitely my favorite thus far. Just when last episode pulled me out, this one pushed me right back in. I’m gonna be thinking about this one all week, folks. Wow. Just wow.

HOTD 108, Paddy Considine, The Lord of the Tides, Vaemond, Viserys