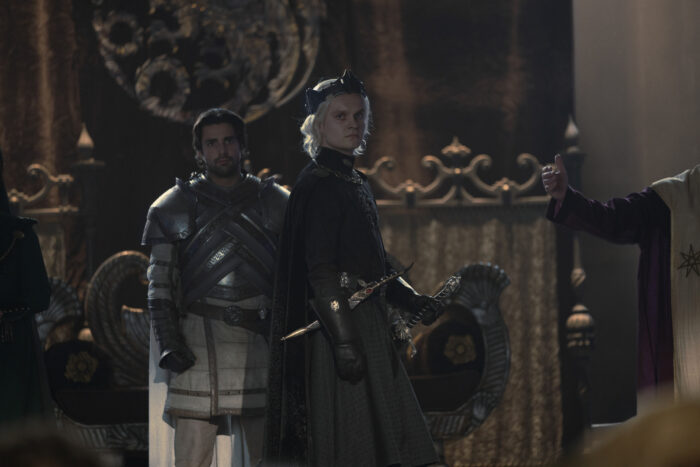 The penultimate episode of House of the Dragon brought us machinations, murders, mayhem, and…masturbation, apparently. “The Green Council” convened to steal Rhaenyra’s throne, and would have gotten away with it too, if it weren’t for that pesky dragon (nevermind, they actually did get away with it – for now). While we bide our time until the finale like Rhaenys locked in her guest room, let’s review today’s interviews and videos!

Fabien Frankel talks to The New York Times about his character’s turn to the dark side, saying, “The sourness and bitterness of this world has washed off on him. You are your surroundings; you are the people you’re surrounded by. Ser Criston happens to be surrounded by an incredibly ambitious group of very Machiavellian human beings whose sole ambition is power. Eventually, you go: ‘Well, that’s the life I live. That’s what I am now. I’m in too deep.'”

As for why Criston decides to crown Aegon II, he explains, “I think he sees it as his duty, by proxy of being Alicent’s sworn protector, to protect these boys. He’s been very close to a father figure to them. Criston Cole taught these kids to fight, taught these kids respect.” Hmm, did he though? Frankel also elaborates on his character’s affection for Aemond. “Criston sees Aemond in himself, and himself in Aemond…[Ewan Mitchell] and I would spend a lot of time together, walking around Spain together, discussing this relationship. There’s a real closeness between them.”

Does Criston still harbor any feelings for Rhaenyra, despite turning on her? “First love is first love. I think everyone will always love the person that they fell in love with for the first time. From the first time you hear a beautiful piece of music, you’ll always love it, even if you’ve heard it a hundred times, because you remember that first time you heard it. So yeah, he will always love Rhaenyra.” Well, Ser Criston, you have an interesting way of showing it. I don’t think she’ll harbor any kind feelings for you after this betrayal.

Head to NYT for more. 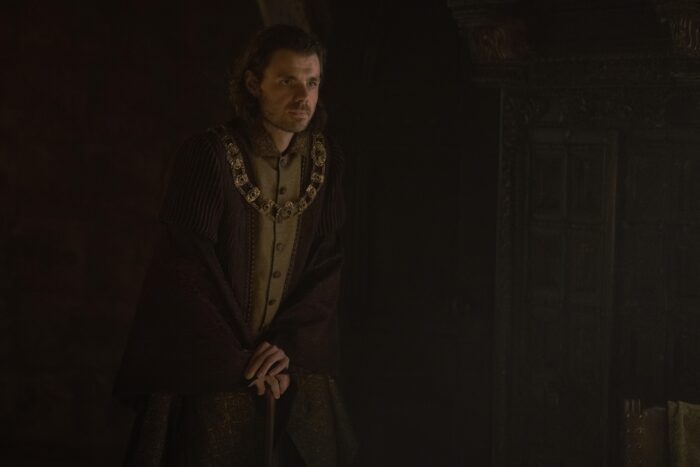 Speaking with Entertainment Weekly, director Clare Kilner discusses that scene between Larys and Alicent. Giving Larys a foot fetish and having him use that as a power play to hold over the queen was the idea of Sara Hess – executive producer and writer for episode nine. Kilner remarks, “Her mind is incredible. I mean, she really wrote us a wonderful episode, I have to say.”

“But, yeah, that was an interesting scene actually…Funnily enough, you get the intimacy coordinators [for] all the nudity, but they don’t think about it for this.” She adds, “It’s so intrusive and invasive. It’s a really dirty scene.” It certainly made the audience – and Alicent – incredibly uncomfortable. 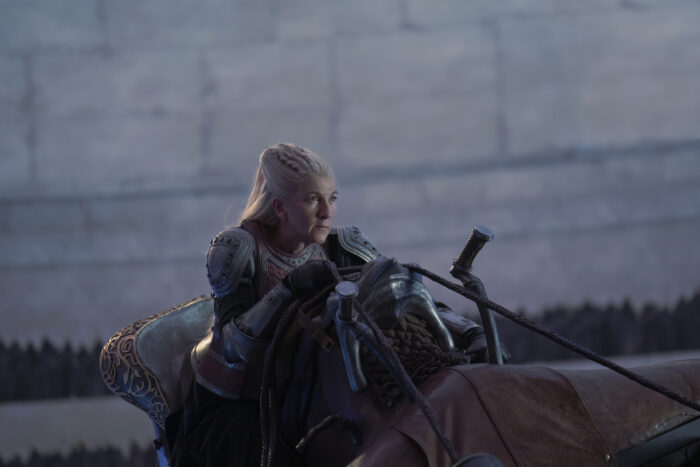 In a second article from Entertainment Weekly, Eve Best joins Kilner to discuss Rhaenys’ escape on her dragon, Meleys. Kilner explains, “We wanted her to be rising like a phoenix from the ashes.” About Rhaenys’ armor, Kilner adds, “She’s traveled to King’s Landing with it because it’s part of her dragon-riding equipment. Also, probably in that moment of knowledge in episode 8, she’s flying into tricky waters…She hasn’t worn it for a very, very, very long time and the fact that she’s wearing it means business. It’s like, ‘This is it. No more games.'”

Best describes the escape sequence as “the pinnacle. It’s the moment when she shows herself to be the greatest possible ruler. It was the most outrageous and explosive action of the season. In a way, it’s also the most merciful and most graceful act. It’s because she’s so intelligent and in the end chooses to do the right thing, which is not to destroy.” I think all those dead smallfolk would beg to differ.

Best adds, “It’s a truly forgiving moment and sort of a loving moment, in a weird way. She has all the ammunition, and the desire for revenge is so great. She’s suffered so much loss, and for her own sake and on behalf of so many others, the urge to destroy is so strong. And yet the choice not to destroy becomes even stronger. That’s the mark of greatness and [a] truly inspiring moment — I think actually one that is particularly resonate in this context of what we’re going through right now in our world with everything that’s going on with Russia. The choice not to drop the bombs is the greater choice.” Unfortunately that choice will have plenty of other consequences yet to come.

Check out the full interview here. 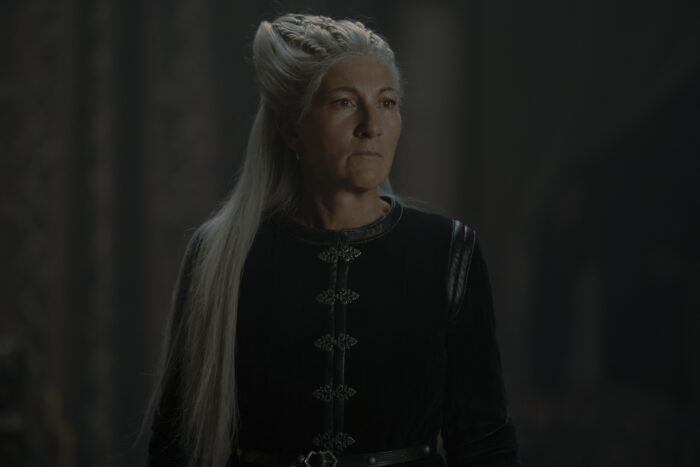 Best also speaks to Vulture  about how what her character represents for the show, as a woman who was denied the chance to rule in favor of a man. “I can’t speak to what it’s like to embody a theme, because she’s a person; that’s for the intellectuals outside the story to comment on. But the experience of being that person is unbelievably frustrating when you’re somebody who’s as qualified, as intelligent, as experienced, as good at what would be expected of a leader as she is. She’s clearly the right person for the job in every respect — apart from her sex in this context. That is the one thing that disqualifies her. That is phenomenally frustrating.”

She goes on to share her thoughts about the Rhaenys and Alicent scene, where Alicent empathizes with Rhaenys over losing the throne. “That takes Rhaenys’s stress away in that moment. Alicent is the first person in her life, apart from her husband, who’s said that out loud. It’s everything Rhaenys thinks in her head. Obviously you can’t go around saying that about yourself. But to have another woman say that, face to face, is very powerful.”

Best adds, “To be seen in that way, to be seen for who she is — it’s the first time she feels truly vulnerable, in a strange way. She was, in that moment, transported back all those years to a young woman again. It takes her breath away. That’s why Rhaenys sits up and actually pays attention to Alicent, and has some respect for her. It’s a very eye-opening moment, to see that Alicent has that clarity and directness. She’s clearly somebody of intelligence and grit. Rhaenys hasn’t seen that in her before.” Perhaps that factored into Rhaenys’ decision to spare her life.

Go to Vulture for the rest.

In this week’s “Inside the Episode,” showrunners Ryan Condal and Miguel Sapochnik, director Clare Kilner, producer/writer Sara Hess, and cast member Tom Glynn-Carney discuss the political plotting and conflicts that occur as the Greens usurp the throne in the wake of Viserys’ death.

In case you missed it, here is the preview for the season finale: