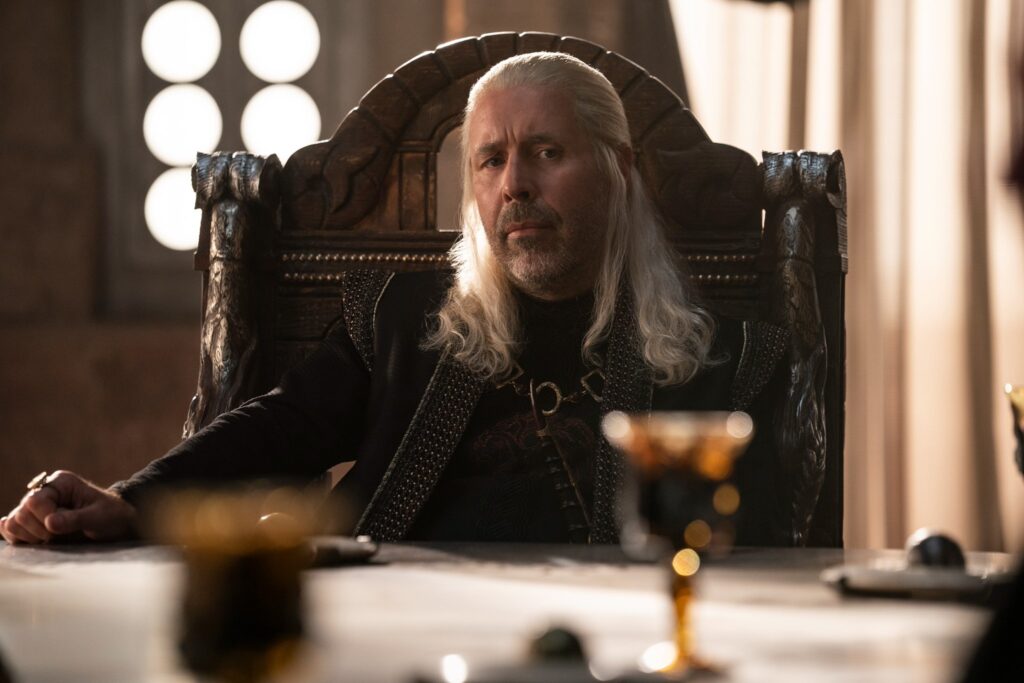 HBO Max and iHeartRadio have teamed up to produce the Game of Thrones Official Podcast: House of the Dragon, hosted by Jason Conception and Greta Johnsen. Their first episode dropped yesterday and featured an interview with Paddy Considine and Matt Smith in which they discussed what makes Viserys and Daemon tick, the relationship between their characters, and how it feels to be in the first Game of Thrones spinoff.

37:22 Considine discusses his character, King Viserys, and how he’s not “meek” or “dithering” as he might appear on the page. “Just because he’s a good man, doesn’t mean that he’s weak, he’s just trying to do the right thing … He’s not willing to go to war to please a few. You know, I think his job is always to see the bigger picture … Jaehaerys was a peace time king and Viserys sees a virtue in continuing that. But at the same time, there is a part of him that’s egotistical. Later on in the show there is a scene where he basically says, ‘How will I be remembered?’ And he says, ‘People don’t remember good kings. They remember tyrants, they remember warriors.’ And my job, [was to go], “Look, he’s a dragon, and we’ve got to make sure early on that, as good a man as he is, that he’s not a pushover.”

38:24 Matt Smith discusses his character, Daemon. “[O]stensibly most people are afraid of Daemon and, interesting for someone to say that Viserys is weak, [because] as soon as Viserys goes, ‘Oy, Daemon. Wind your neck in,’ Daemon does … and Daemon shuts up and eats his porridge when he’s told to, but only from him.”

39:02 Paddy Considine: “Viserys does love Daemon, massively, they just can’t articulate it between each other. Daemon, in Viserys’ eyes, is a fuck up. He’s always bringing trouble to his door. You know, but a part of Viserys envies Daemon, because part of him wishes that he could go off and do what Daemon does.

39:33 Jason Conception asks if Daemon would make a good king. Matt Smith: “No.”

40:38 Matt Smith: “I think [Daemon’s] only interest in power is in, sort of, usurping it for shits and giggles. And you know, oddly, he says to his brother, you know, ‘You’re weak’ but I think that’s all about him going, ‘I don’t feel recognized.’ Everything Daemon does is a response to going, ‘I want you to recognize me’ You know what I mean? ‘Please. I love you. I love you. I love you.’ He’s his annoying little brother.”

41:25 Paddy Considine: “And I felt that, even when we were making it, that Daemon just wanted Viserys to say, ‘I love you.’ And Viserys sort of knew that, but, begrudgingly it’s like, ‘I’m not going to say that to you.’ He doesn’t hate Daemon. He doesn’t hate him at all. He’s just not going to give Daemon what he wants.

42:16 Matt Smith: “What’s weird about Daemon, I’ve found, and I don’t know if I projected this onto him but, for someone who on the page looks sort of disloyal and irreverent and all these things, actually there’s a real sense of value and loyalty about him. And there’s a sort of weird sensitivity to him. And it’s about going, ‘Yeah, but that’s my birthright. You’re stealing what is, essentially, my birthright’ … I think he probably knows he’d be a terrible king, but, also, I think he’d have a good time doing it.”

43:54 Paddy Considine, on whether Viserys thinks he can fix his brother: “Absolutely not. He can’t fix his brother and I don’t think he thinks he can. What he does is occupy his brother. ‘If we keep Daemon over there and put him in charge of that and keep him busy, you know, well, no one’s talking about him and then everything’s fine.'”

46:37 Paddy Considine: “What I liked about the scripts [for House of the Dragon] was that it didn’t feel like it was a spinoff. They weren’t shooting it particularly differently, you know? Like, reimagining everything and it’s going to look like The Matrix … it was well within the world of Game of Thrones. And I think that’s a smart move. I think that’s really good. And I thought it was well within the framework of what I’d watched. So, I was excited about doing it.”

47:18 Paddy Considine: “And I think, Matt, at times we had to … establish … that this is our experience … we can’t forever be in the debt of [Game of Thrones]. It’s like, ‘Well, you’ve hired us. This is a year of our lives, now.’ We’ve got to do our jobs. So, we had to, sort of, get on with things and make this experience unique for us too, if that makes sense.”