HBO airs 2019 spot featuring a glimpse at Season 8 of Game of Thrones! | Watchers on the Wall | A Game of Thrones Community for Breaking News, Casting, and Commentary 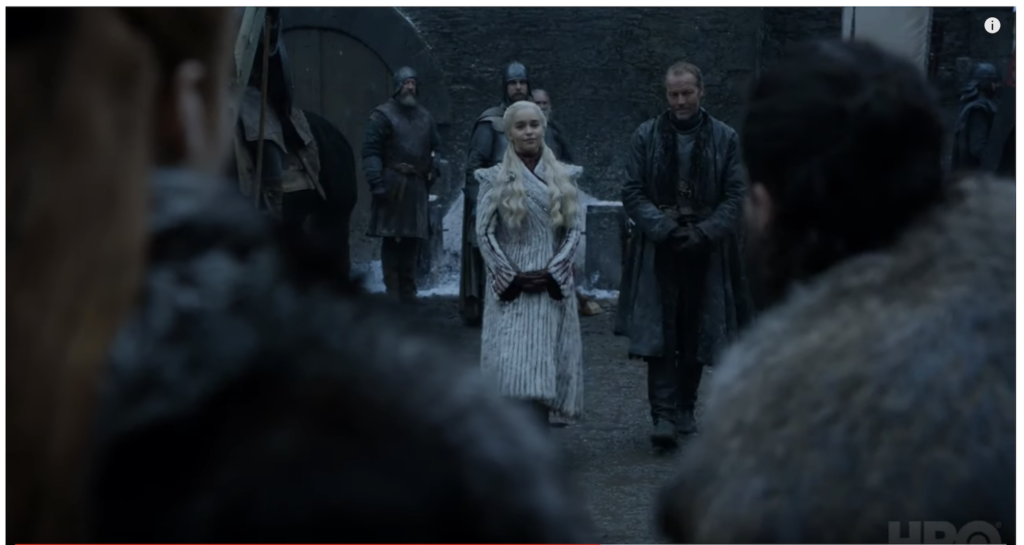 This is not a drill, people — we have new footage of Season 8 of Game of Thrones!! It’s only a glimpse of a portion of a scene, but we’ll take it. Seven save us, will we take it.

HBO ran a TV spot highlighting its 2019 lineup about an hour and half into the 76th annual Golden Globes telecast on Sunday night (quick shoutout to Richard Madden, who took home best actor in a drama series for his BBC show Bodyguard), and among the teasers for its other offerings, we were hit full in the face with a five-second scene of brand-new footage from the upcoming final season of the world’s most popular TV show. The Thrones scene starts at just about :38 seconds in:

In the short clip, we see Daenerys — wearing the gorgeous red-tinged fur coat she sports on the Entertainment Weekly magazine cover from a few months back — in Winterfell, Jorah by her side, walking purposefully toward Jon and Sansa. The Lady of Winterfell appears to take a deep breath before announcing, “Winterfell is yours, Your Grace.” End scene.

There’s so much to unpack in just these four or five seconds. You can cut the tension with a knife, for starters — Sansa smiles when she welcomes Dany, and Dany smiles back, but we can tell this is going to be one tense meeting. I can practically hear Jon whispering to Sansa “Be nice” out of the corner of his mouth as Dany approaches.

Brienne, seen over Sansa’s shoulder, looks very concerned. Jon looks happy to have Dany by his side, which means he either hasn’t seen Bran yet or Bran is in full cryptic three-eyed raven mode and hasn’t exactly told Jon what he knows about his parentage (and other, ahem, sensitive details). We don’t see Arya either — has the long-awaited Jon/Arya reunion hug already happened? Or is she as unhappy with Jon bending the knee to Dany as Sansa is? Let us know your thoughts!