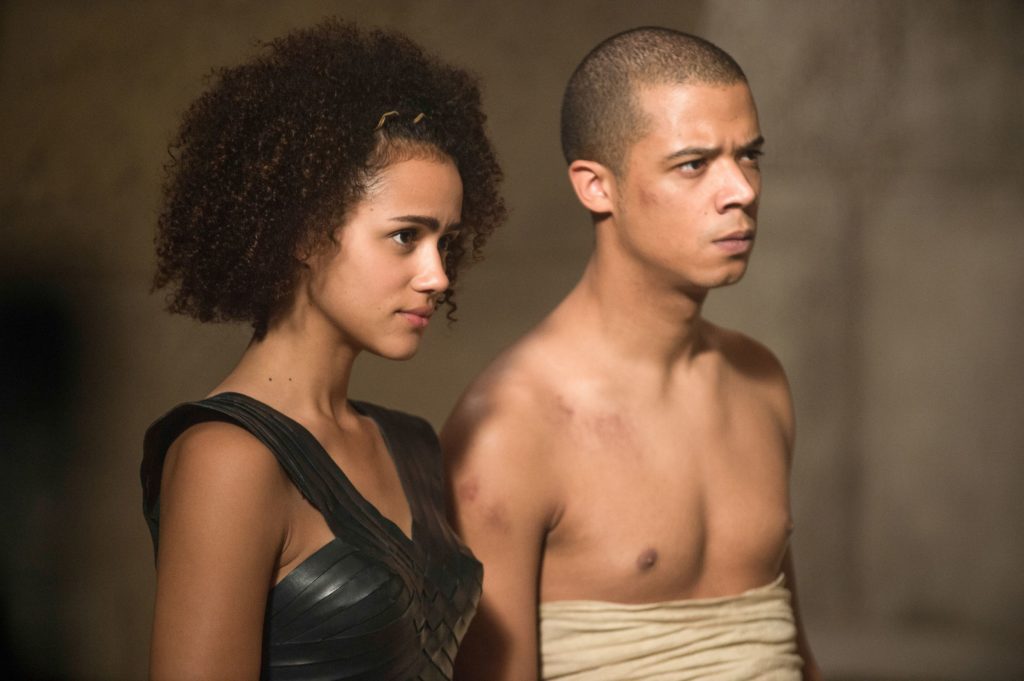 When you step back and take in Game of Thrones’ cast of thousands, you can really appreciate how exceptional Grey Worm and Missandei are. It’s not just that they’re one of the few couples to have survived this long (though holy moly the mortality rate for romance is high on this show), but rather because their shared relational arc touches on some of Game of Thrones’ bleakest concepts yet actually offers a hopeful outlook.

If there’s one thematic throughline that connects most, if not all, the characters who have survived to the end of season 7, I’d argue it’s learning how to live down trauma. Anyone who has made it this long in Westeros has been subjected to horrors most of us can’t imagine and made mistakes that got people killed. Seasons 6 and 7 in particular deal with characters figuring out how to move forward and coming to terms with how these experiences have changed them.

In most storylines, faith in something as quaint as romance is one of the first casualties of a character’s disillusionment. Sansa regrets her infatuation with Joffrey, Jon loses Ygritte several times over, Daenerys euthanizes Drogo, Tyrion strangles Shae, and Robb and Talisa pay dearly for following their hearts. One way or another, these couples are torn apart and the survivors rebuild themselves with reorganized priorities.

Grey Worm and Missandei, by contrast, have already endured a lifetime of abuse by the time they meet and the bond they form is what helps them heal and move forward. It’s important to note that, unlike characters like the Stark children, for example, we never got to know Grey Worm and Missandei before their trauma. They themselves have little to no memory of life before enslavement. This sets their arc apart from most others as their story isn’t about building themselves back up but rather discovering what it means to feel human in the first place.

I should stress that I said feel human, not be human. No one’s humanity is contingent on their social status but the way people are treated does inform their self-perception. Grey Worm and Missandei were objectified and commodified from early childhood; that shaped the way they saw themselves. It’s no coincidence that they’re introduced into the show more as narrative tools than as individulals. They have a few characters beats in season 3 such as Missandei sanitizing Krazny’s rude comments as she translates for Daenerys and Grey Worm explaining why he’s chosen to keep his Unsullied name. But for the most part they are what they do. Missandei is a translator; she translates. Grey Worm is a soldier; he fights. 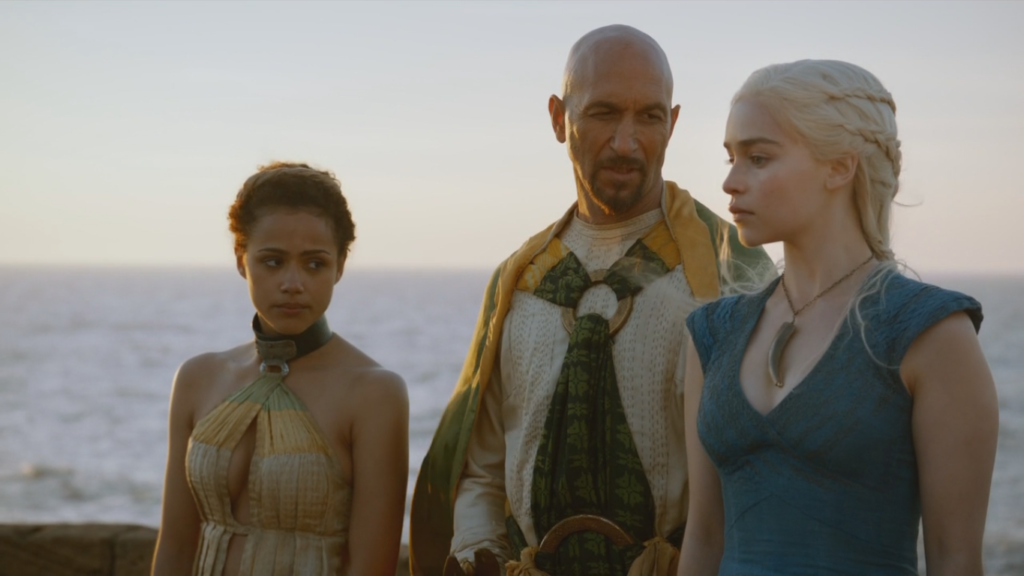 It’s not until season 4 that Grey Worm and Missandei begin to develop their relationship and, in doing so, start fleshing out their own internal lives. We get our first hint of a connection when Missandei shoots Grey Worm an admonishing glance in 4×01 “Two Swords” but it’s not until episode 4×06 “The Mountain and the Viper” that they vocalize, albeit laconically, that for the first time in their lives, they feel desire for someone else. Most telling of all is Grey Worm’s use of the word “precious,” which Jorah taught him. It’s never made clear if Grey Worm asked Jorah for a direct translation of a Valyrian phrase or if Jorah had to sit through a lengthy description before suggesting “precious” as an adequate summary.

Either way, Grey Worm, the elected general of the infamously disciplined Unsullied army has sought out a new word to adequately describe what his language lessons with Missandei mean to him. Normally, when male characters do this it indicates that they have an unexpected sensitive side, such as when Michael recommends that his cellmate use the word “passion” instead of “love” in a letter to his girlfriend in the first episode of Prison Break. However, with Grey Worm it’s a sign a personal growth, an indication of newfound introspection.

Possibly Grey Worm and Missandei’s most significant break through is confessing to each other that they both “have fear” now that they have someone to lose. This is such a drastic change for Grey Worm that describes it as “weakness” but that’s the double-edged sword of the human experience. If you can feel desire and pleasure that means you also have the capacity for fear and pain. Admitting this to each other is what finally frees them up to act on on their mutual attraction. Speaking of which …

Setting aside the initial half-joking glee of, “Oh, hey! They finally figured it out,” there‘s something wonderfully defiant about Grey Worm and Missandei’s love scene. I think Alt Shift X put it best:

Grey Worm and Missandei were both slaves. Their bodies were property, tools for violence and obedience. But here they defy their former masters by instead using their bodies for love … which is kind of beautiful.

“First times” are typically important to a character’s development, for obvious reasons, but Missandei and Grey Worms’ consummation deserves special mention. It signifies how far they’ve come, both as a couple and as individuals. Their very capacity to feel and share something so intimate flies in the face of everything that their former masters thought them to be.

I suspect part of the reason Grey Worm and Missandei tend to get less attention from the fandom (SNL apparently forgot they existed for one sketch) is because their arcs are much less flashy than others’. Indeed, in a world in which most people seem to swap names, allegiances and literal faces as often as we change our small clothes, Grey Worm and Missandei lead staggeringly uncomplicated lives by comparison. They always speak in quiet voices, their loyalty to Daenerys remains unambiguous and, even though it took them a long time to consummate their relationship, they never fell into the void of the Will-They-Won’t-They trope.

For having had among the harshest upbringings of any character on the show, they are both extraordinarily well-adjusted people. I think that’s the point.

Whether this was intentional on the part of the writers I neither know nor care but Grey Worm and Missandei prove that hardship and even trauma don’t have to rob you of the capacity for gentleness, decency and love. As I said earlier, trauma has become one of the major themes of the show. Grief, abuse, loss of faith, systemic injustice … these are complicated issues that change people, and not in a way that’s pretty or clean or easy to understand.

While it’s important to truthfully depict the range of ways that people cope with trauma (and for what it’s worth I think Game of Thrones has made great strides in that department) there is also great value in creating characters we can aspire to emulate. Missandei and Grey Worm don’t let the horrors of their pasts rob them of having a future. Yet, they didn’t come into this strength all on their own. While love interests are so often extraneous to a characters’ arc Grey Worm and Missandei’s mutual attraction has been integral to their development. They’ve helped each other become their best selves.

That’s one hell of a love story.