Game of Thrones Season 7 Episode 7 - Trailer Breakdown for the Season Finale! | Watchers on the Wall | A Game of Thrones Community for Breaking News, Casting, and Commentary

Here at Watchers on the Wall, we don’t usually go into ‘analysis mode’ for a mere episode promo, as that is usually reserved for proper trailers. However, for the season seven finale we are making an exception, as there’s a lot to glean from the promo.

This episode isn’t special just because it’s a finale: at 80 minutes, it’s the longest Game of Thrones episode ever; and, despite that, we have only seen four shots of it in trailers. Even for those of us who dove into spoilers and leaks, there is still mystery around it.

Most of the promo focuses on the sequence that promises to be the main event of the episode, as well as the climax to the main plot this season: the meeting of Lannisters and Targaryens to negotiate an armistice in order to fight their common enemy — death.

First we see Grey Worm and the Unsullied in one of the few shots we’ve seen before, approaching King’s Landing, as well as Euron protecting the bay with the Iron Fleet. Last we saw Grey Worm, he had just easily taken Casterly Rock only to realize it was a ruse by Jaime, and the ‘Best Captain in the Fourteen Seas’ was there to besiege them in their new fort. It appears the siege has been broken for the sake of the armistice. 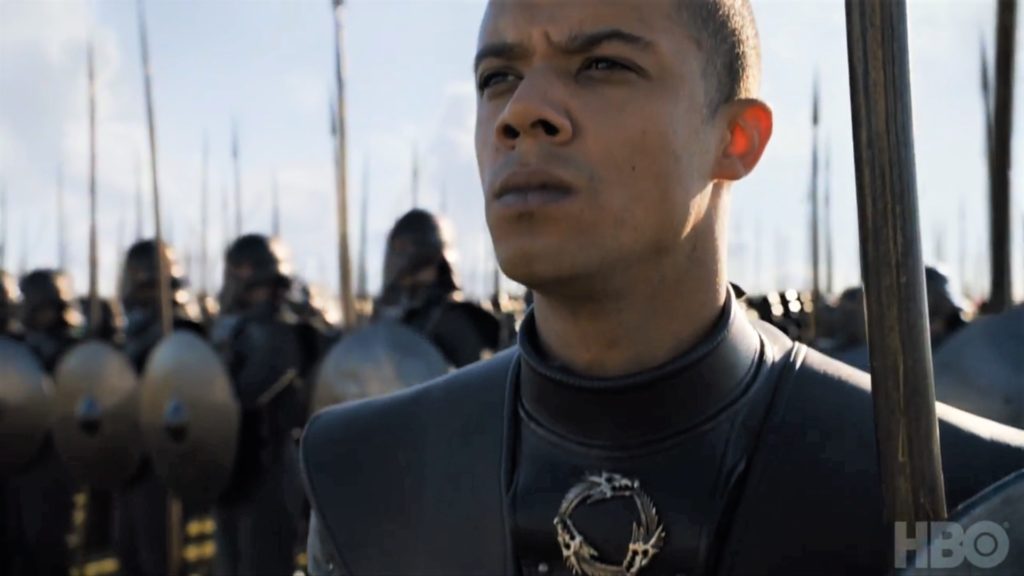 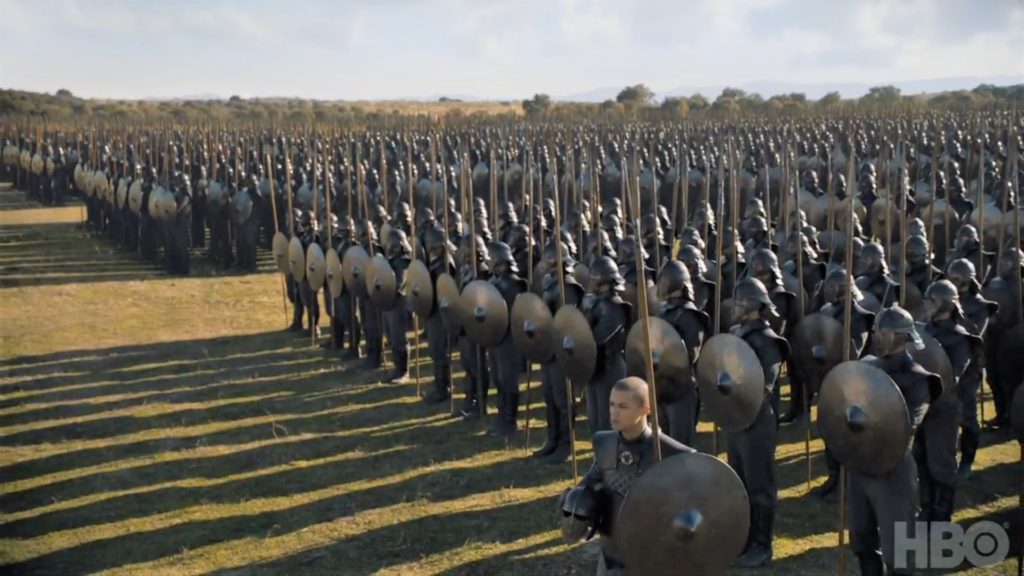 With a shot so reminiscent to the one in Bran’s season four vision of the Red Keep being literally overshadowed by a dragon, one must wonder if that shot will now come to life. Remember: Daenerys is bringing the dragons as well. Of course, the plan was to bring all three of them, but… — Oh, wait, I have something in my eye. It’s tears. Of sorrow. 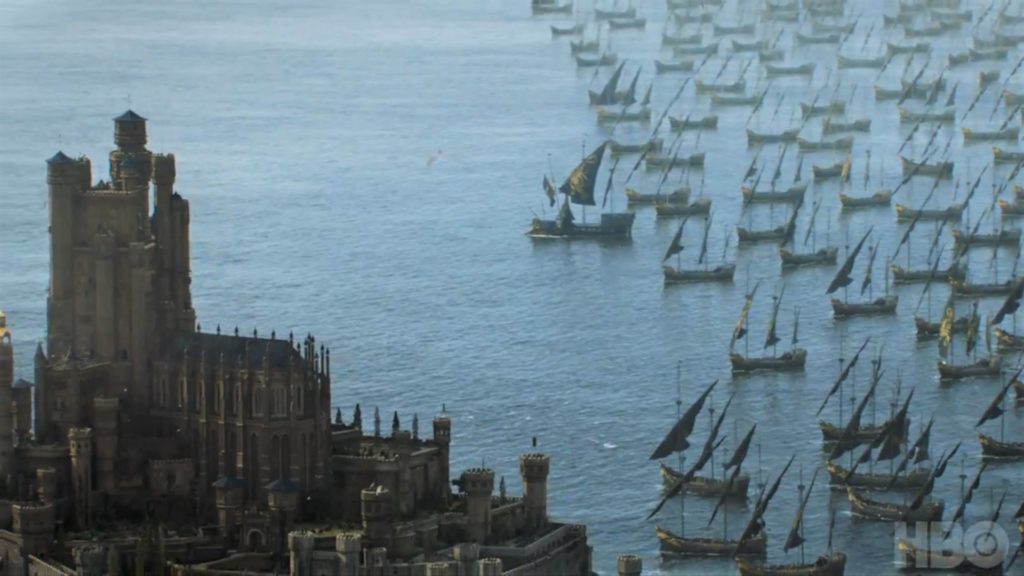 Next up, Tyrion, Varys, and Theon approach the capital and Euron’s fleet with a troubled look on all their faces. Be prepared for lots of troubled looks in lots of faces. Tyrion is about to be in front of the woman who wants to murder him more than anyone else; Theon will face his sister’s captor; and Varys is doing his best Napoleon impression. 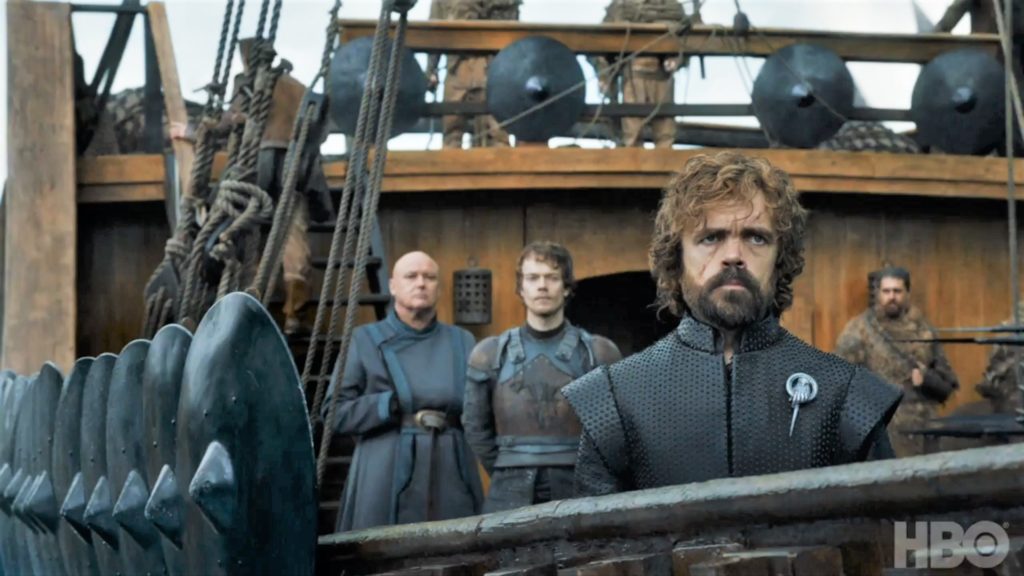 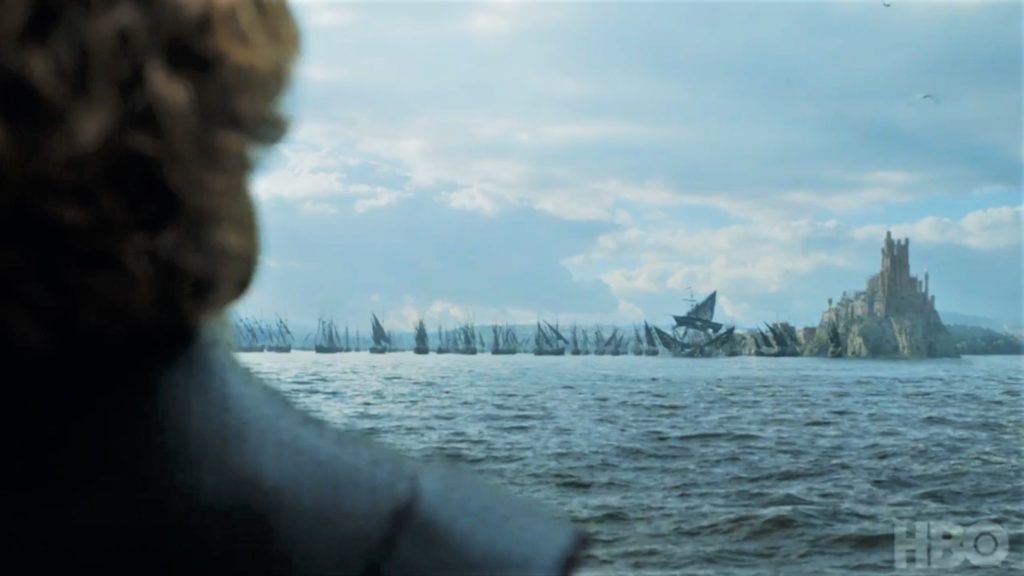 Just as Tyrion explained in “Beyond the Wall,” it’s not just Unsullied that Daenerys is bringing to this conference. The Dothraki ride through the formations of the Unsullied, as Jaime and Bronn look down from the city walls. They seem troubled too. Both sides are prepared for a trap, so they are all bringing their forces. If the armistice goes awry before it can even flourish, we must assume war will resume immediately. 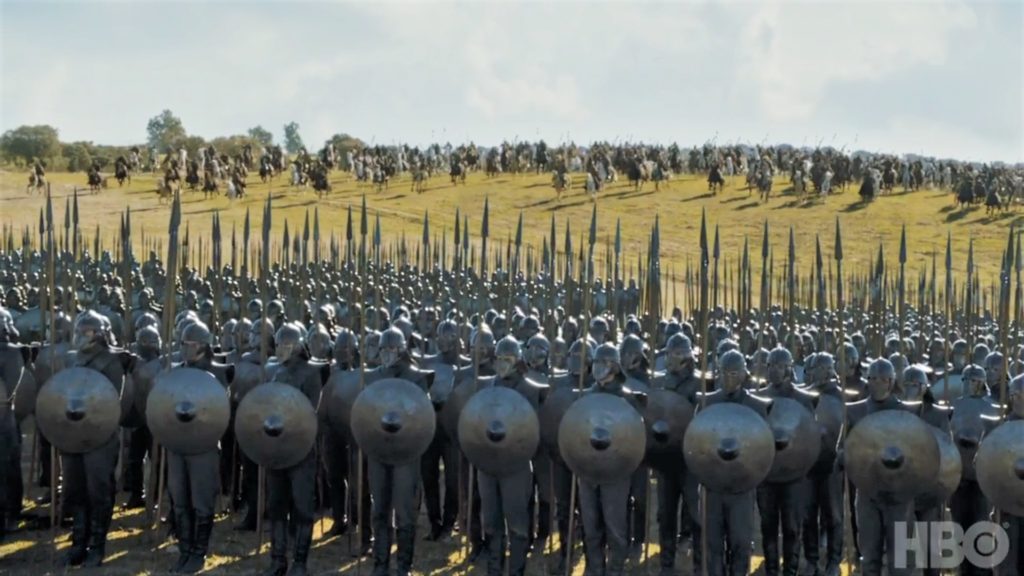 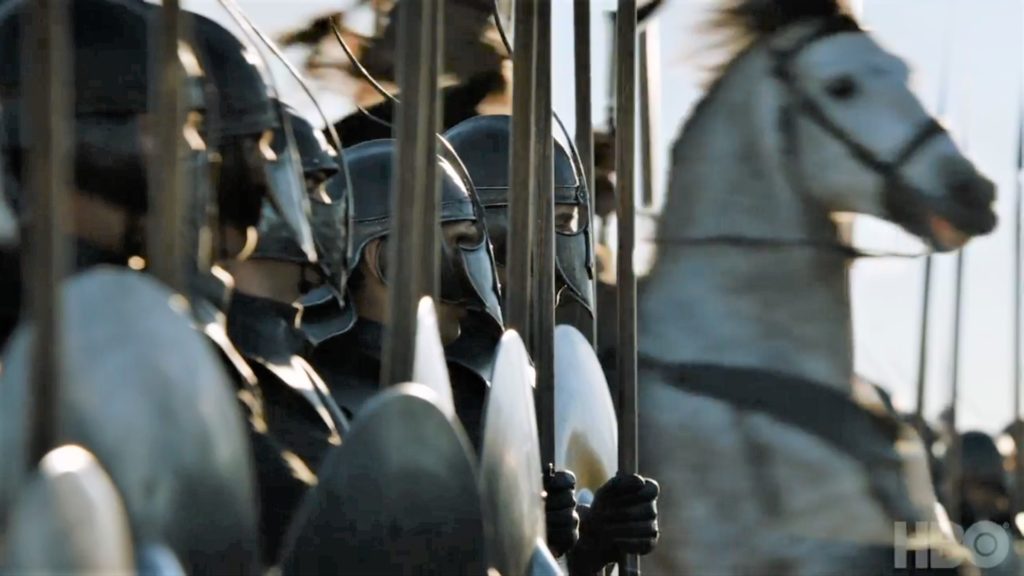 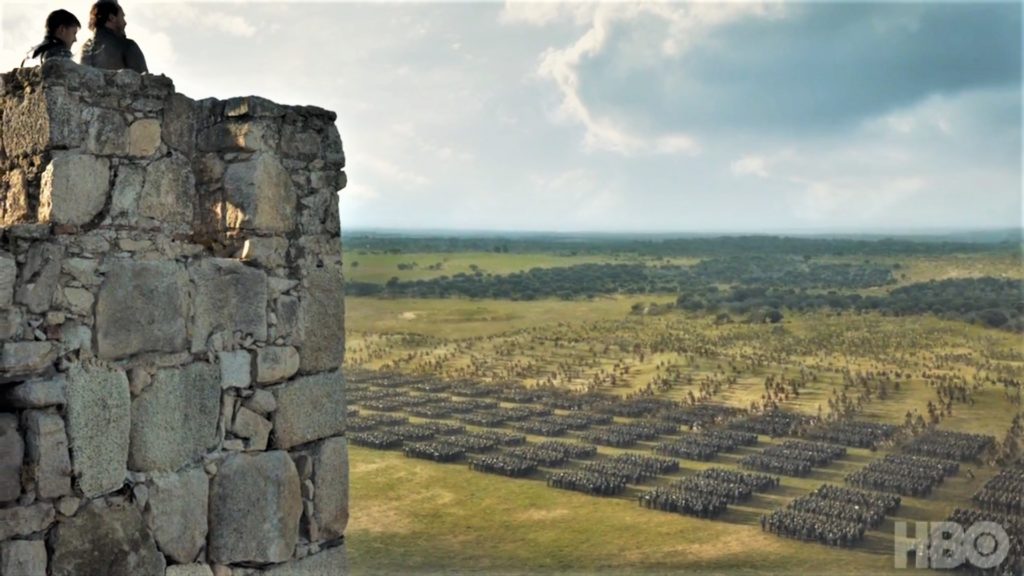 Incidentally, the wall shots above and below clear up contradictory filming reports. The castles of Trujillo and Almodóvar del Río in Spain were said to depict Highgarden, and there were rumors of Casterly Rock as well. However, director Jeremy Podeswa was spotted on site, and we knew neither of these strongholds would feature in the premiere or finale. In the end, Almodóvar was used exclusively for Highgarden, and the Lannister stronghold was achieved purely through a redesigned Riverrun set and VFX.

So what was Trujillo Castle used for, after all? For a new part of King’s Landing’s walls, apparently. We’ll have to wait and see why the walls of Dubrovnik weren’t up to the task for this one. If I were to venture a guess, it would be that it’s a matter of space. During filming, the courtyard of Trujillo Castle was filled with extras acting as busy soldiers, and the geography of Dubrovnik’s walls don’t allow for such a shot. 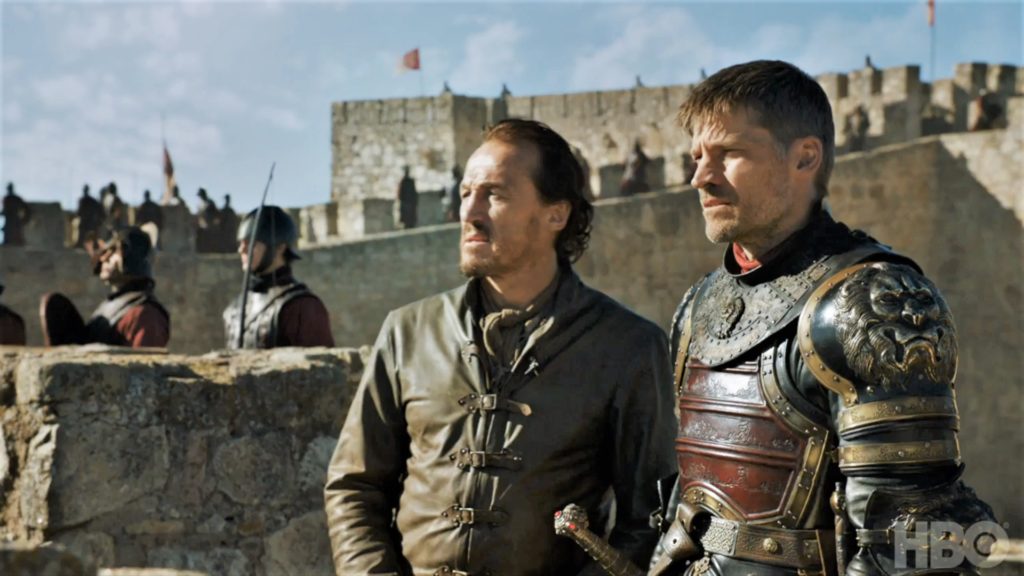 In another familiar shot, Sansa looks over the battlements of Winterfell, deep in winter. She may be miles away from the troublesome affairs in the capital, but the Lady of Winterfell has her own damn good reasons to be worried for her life and the North.

We can only hope she is scheming to put an end to the conflict with Arya, preferably by throwing Littlefinger off those very battlements. But please, Sansa, make sure you get it right: throw him inside, like with Myranda, so his head gets splattered, not outside, like when she and Theon escaped, or else he’ll just run away to live and creep another day. 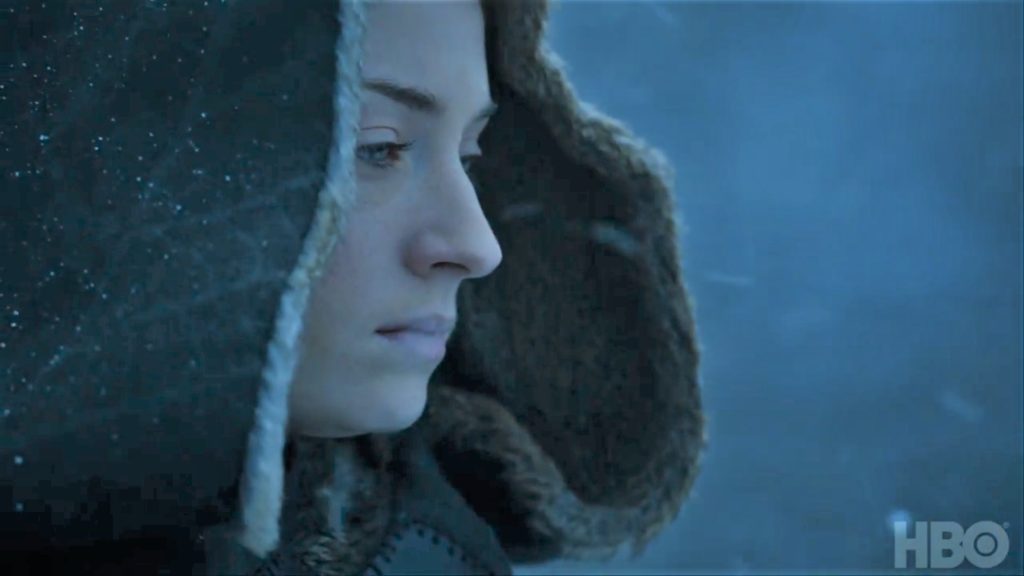 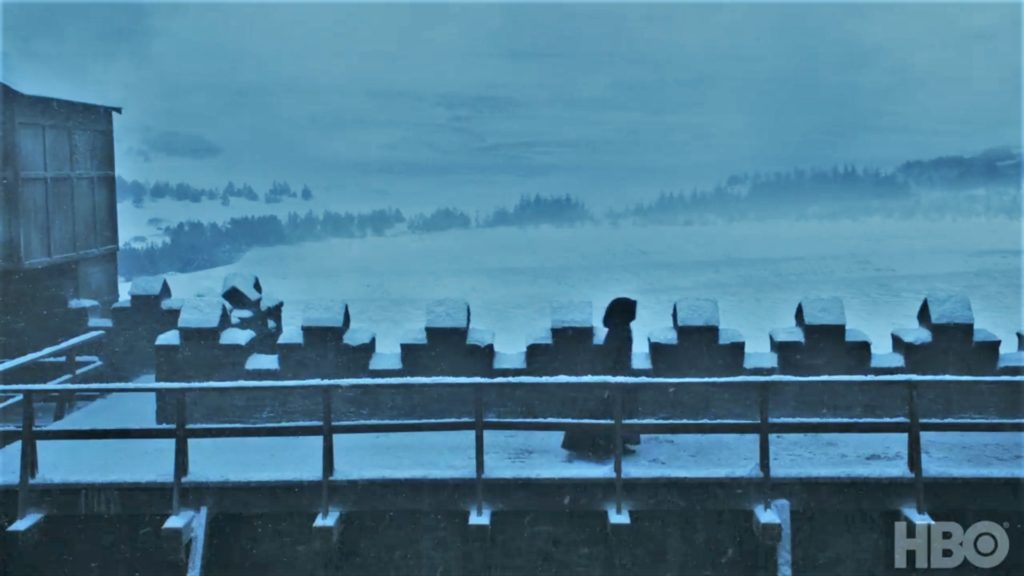 Theon kneels on the sands of Dragonstone in a gesture of defeat, with ironborn behind him. Few had predicted this trailer shot belonged to the finale, and even now the context is difficult to predict. Theon returned to Dragonstone to ask Daenerys for help in rescuing Yara, but we didn’t get to see this conversation take place, and now months have passed. Does this beach scene, filmed in Zumaia, take place before the Lannister-Targaryen parley or afterwards? Has Euron proven to be as terrible as he appears and is Theon mourning the loss of Yara, or is there another reason for his actions here? 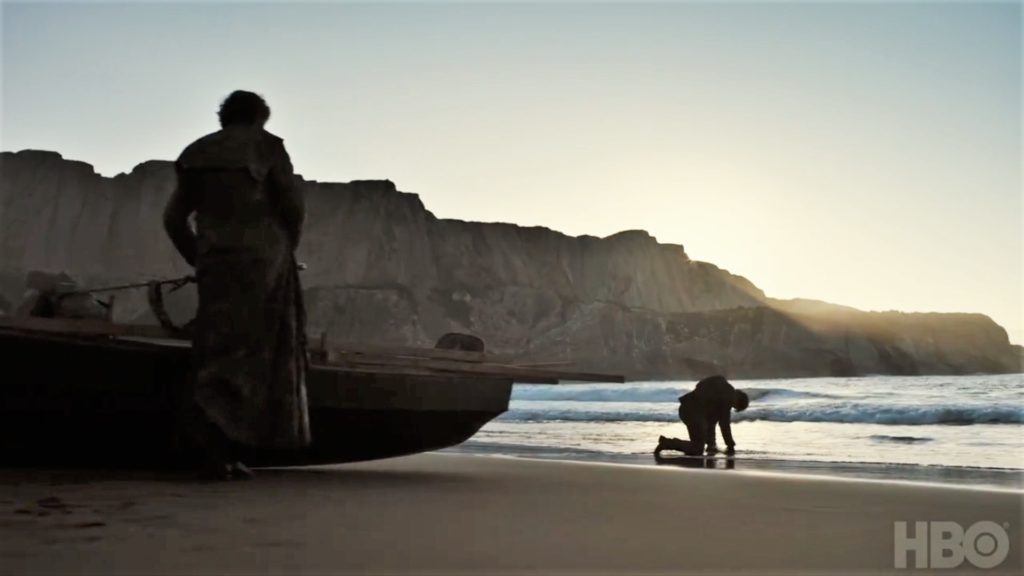 In our last known shot of the day, Cersei, wearing truly winter wear for the first time, approaches some seemingly Lannister-clad men in her fancy new strategic map room. We saw the reverse shot of this one in an exclusive Greek trailer back in July, which gave us a better look at Cersei’s clothes and at the Darth Vader-cosplaying Mountain. 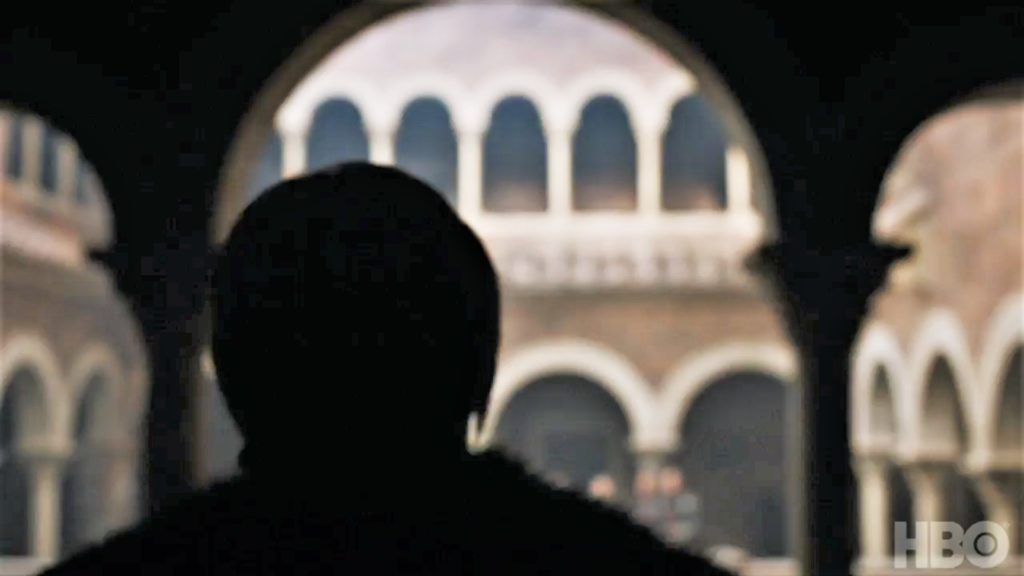 The promo ends with a taste of the parley between the three main Houses in this story, which takes place somewhere just as historic as this meeting of almost all the main cast: it’s the ruins of the Dragonpit of King’s Landing. Along with the Red Keep and formerly the Sept of Baelor, the Dragonpit is one of the main landmarks of the capital, but we have never seen it before in the show, and it has only featured briefly in the books.

You might have noticed one of the Lannister soldiers Arya met in the season premiere mentioned the Dragonpit, which is a first for Game of Thrones. If you’re just a show watcher, don’t worry too much about the history of this ruined landmark, as you’ll likely get it next episode, but the basics are that this is where the Targaryens once kept their dragons … until something went terribly wrong, resulting in the death of many dragons and many more smallfolk, as well as the destruction of the dome that covered the pit. 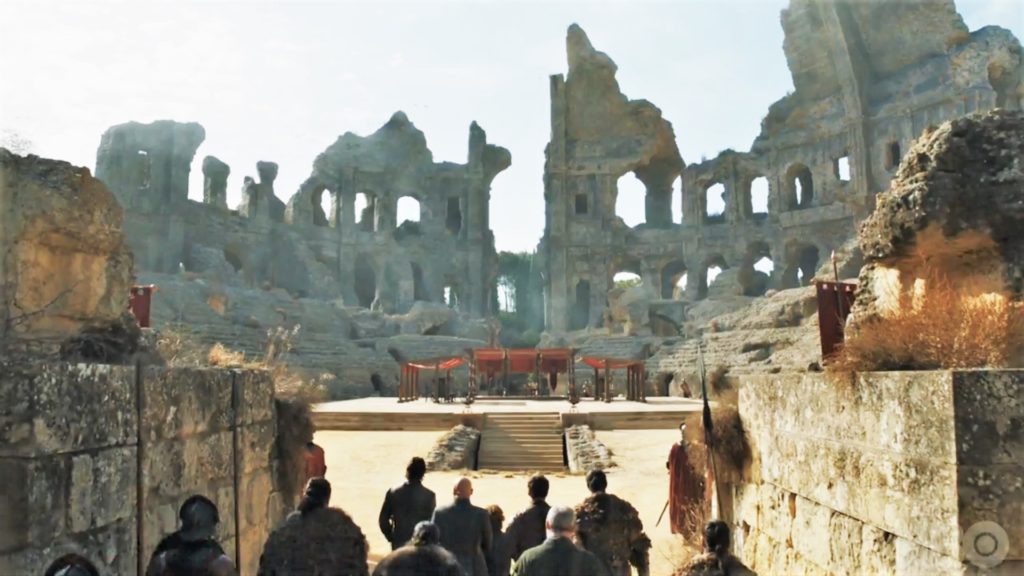 For those of us who ardently followed the production, the filming of the scenes at the Roman amphitheater of Itálica in Seville were among the most exciting this season. There has never been a meeting of this many characters. You can see Jon, Tyrion, Podrick, Dany’s bloodrider Qhono, Varys, Davos, Brienne, Missandei (that’s her fabulous hair between the shoulders of Podrick and Jon in the second photo below), Jorah, Theon, Cersei, Qyburn, and Jaime. Judging by a trailer shot, Sandor is there too.

We know of other characters being there, but those are filming spoilers, hidden here:


The Mountain will be present, which should be interesting with his brother there, as well as Euron, and, of course, Daenerys, who I assume is arriving on Drogon. 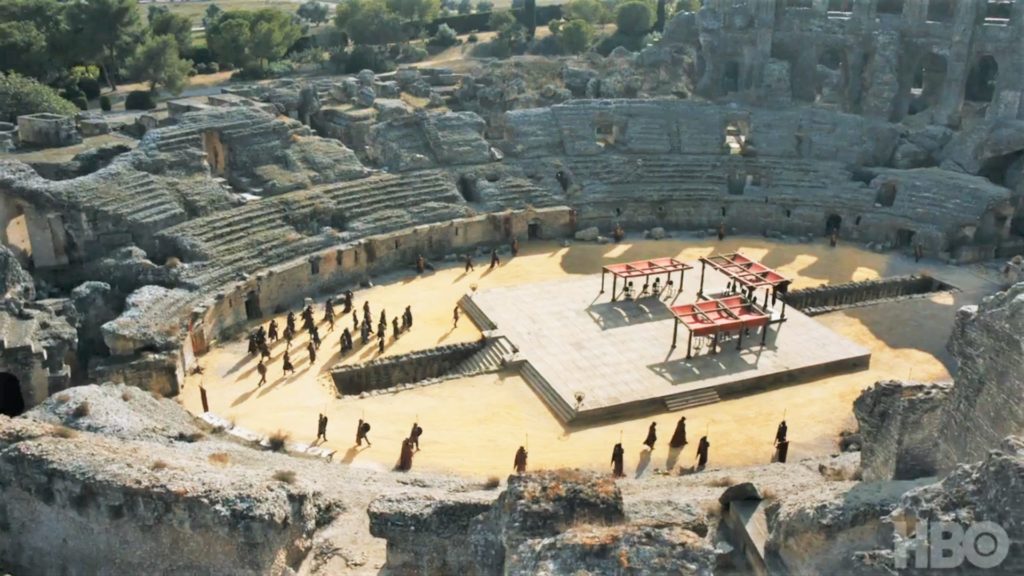 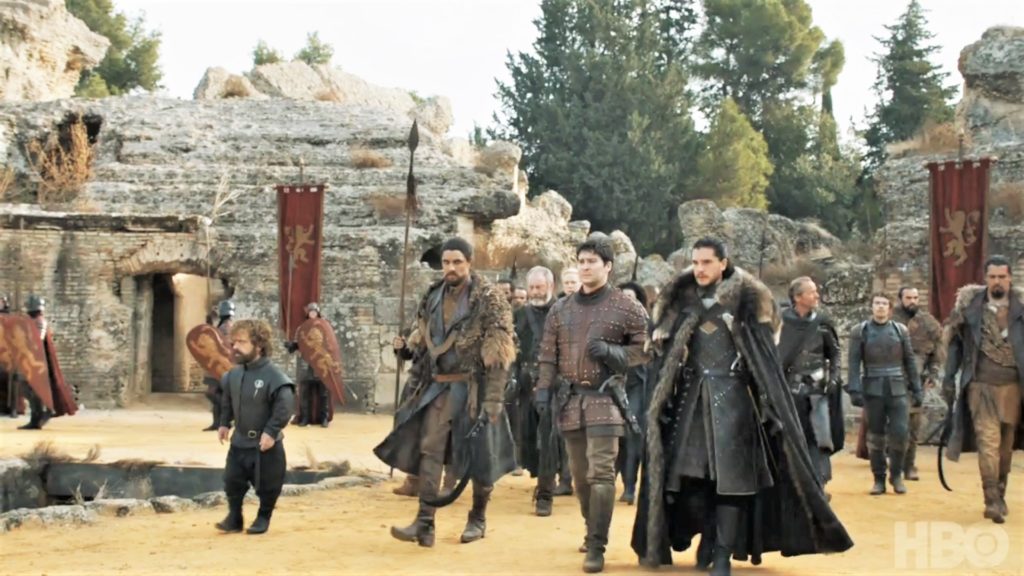 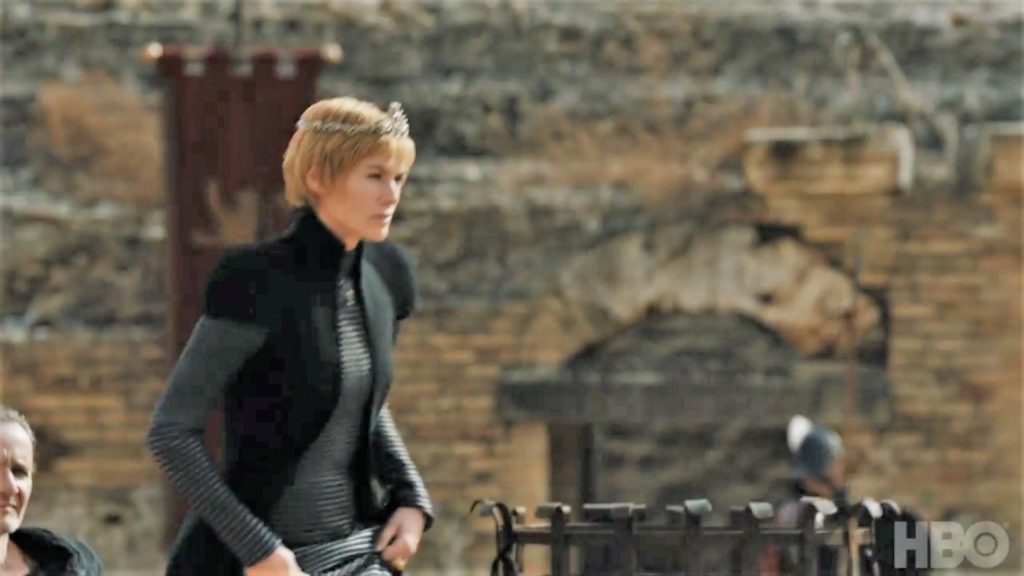 The last four shots imply this war might be decided with a battle of stares: Jon and Davos defiantly stare at someone passing by; Tyrion side-eyes the camera; Cersei looks pretty pleased as she looks at her enemies while Jaime looks at her worriedly; and Jon addresses someone, presumably Cersei, with the only dialogue in the promo:

There’s only one war that matters. And it is here. 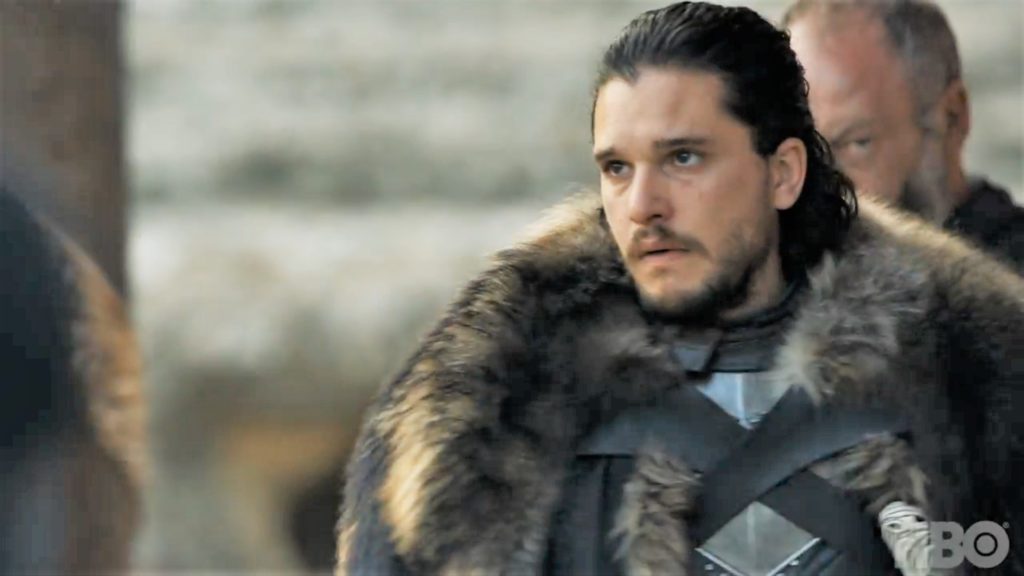 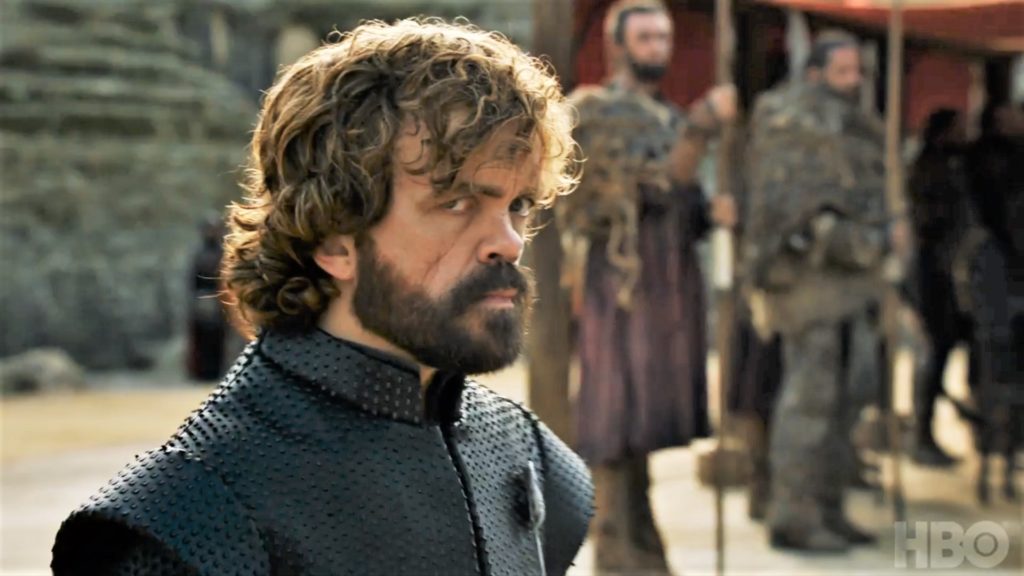 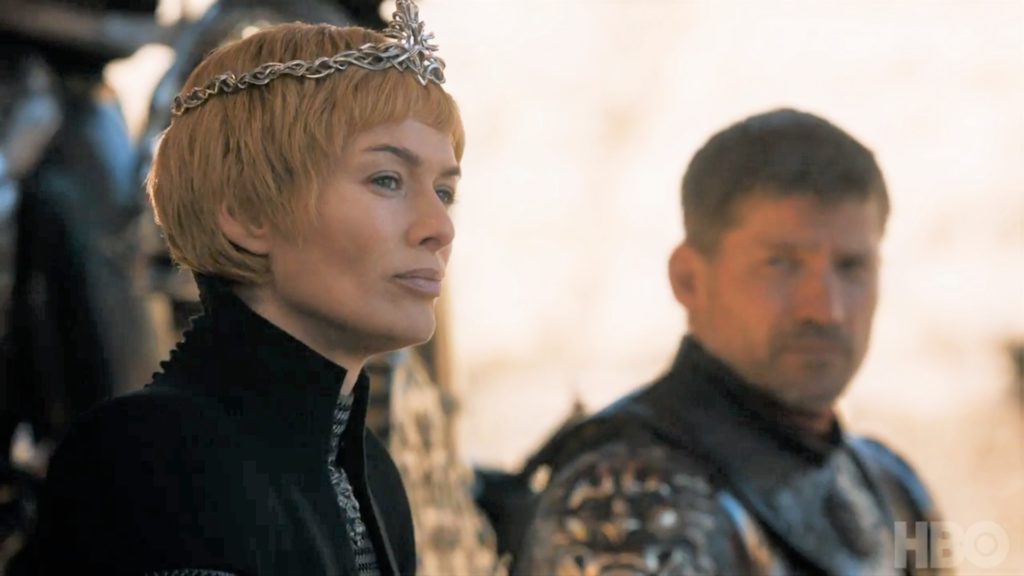 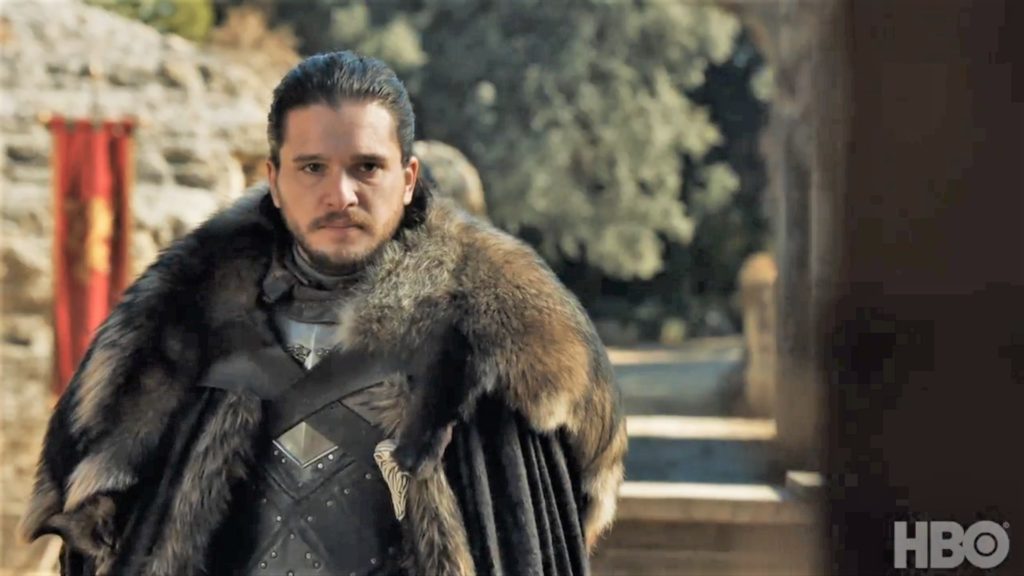 So that’s it! The season finale promo, shot by shot. It’s almost here. The penultimate season finale we will ever get. In less than a week, we’ll have to wait for more than a year for the eighth and final season to arrive. Mind you, we’ll be there along the way, covering its filming as always, but that’s not half as exciting as actually getting to watch the show. So let’s savor it! Before the drought, we still have 80 minutes left of Game of Thrones!