Game of Thrones: Post-Mortem of "The Red Woman" | Watchers on the Wall | A Game of Thrones Community for Breaking News, Casting, and Commentary 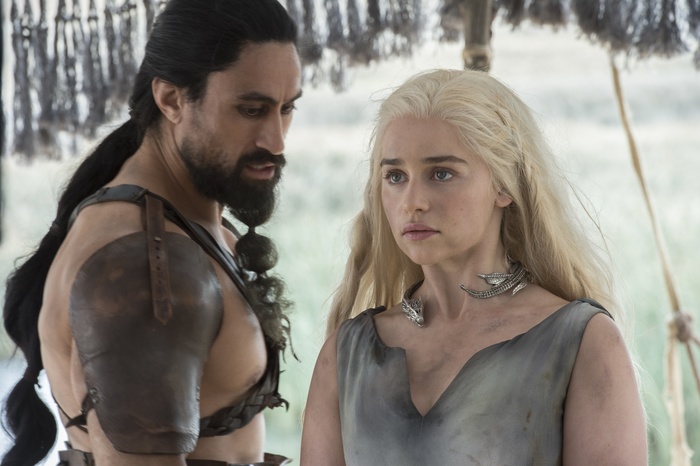 It’s finally here!  The Season Six premiere of Game of Thrones has aired, with some glorious fights, plenty of Dornish deaths and that shocking end scene.  Let’s check out some of the interviews and videos examining “The Red Woman.”

I was really happy when I read that we were going to reveal that this year.  I don’t think a lot of people will see that coming. It makes her immediately more vulnerable, but also more wise and even more mysterious. There’s also a vulnerability in her age.

The actress revealed that the showrunners only told her of Melisandre’s real age while shooting this season, but it’s helped put some of her actions into context.

That’s why she was able to say, ‘This is just a small war, it’s all relative compared to the big war were going to face,’ Her age makes everything even more meta. Definitely, that’s where all that stuff comes from. She has no idea how she does it.  A magic necklace? Wow.

Vulture also reported on Melisandre’s new look, with reactions from Isaac Hempstead-Wright, Liam Cunninham and Hannah Murray, which you can check out here.

Gwendoline Christie spoke to Entertainment Weekly about how it felt to finally rescue Sansa.

After season 5 people would come up on the street moaning about why Brienne wasn’t doing more, and I’d say, ‘I’m terribly sorry I’m not really in charge of that!’ It was really exciting to see Brienne burst forth again. I loved seeing Brienne fighting again. There was so much action and it’s quite brutal and it’s very exciting to dedicate myself to that moment to overcome that obstacle and rescue Sansa.

Christie says she found the oath particularly touching, as it mirrors her time with Catelyn and was a gratifying moment to have finally found one of her daughters.

Director Jeremy Podeswa was also fond of the scene, thanks to the mixture of rousing action sequence and character development with a heartfelt tug.

It’s great when you can marry something that has a lot of action with something that’s quite emotional.  Theon shows his own agency and protects Sansa, you get to see Brienne throwing down a charging horse with her bare arms, and then there’s [the oath].

For more on this scene, check out Vulture’s new interview with Sophie Turner.

She might only have made a brief appearance this episode, but Maisie Williams has also been doing the interview rounds, with Q&As for Vulture and The New York Times, which naturally focus on her acting blind.

You can’t comprehend being without your eyes, and you have to put your faith and trust in the people around you, who are also the ones who put you in that position. She has no other choice. So that’s a really interesting position to see her in, because she’s never had to trust someone. It’s a very vulnerable place for her to be at the beginning of the series, but things will turn around.

You can read them in full here.

HBO has released its usual bevy of post-episode videos.  In “Inside the Episode,” David Benioff and D.B. Weiss discuss the machinations behind Jon’s death, how Tyrion is rising to the challenge of governing Mereen, Cersei’s downward spiral and Melisandre’s true appearance.

Emilia Clarke and Joe Naufahu discuss Daenerys’ arrival amongst Khal Moro’s tribe and what happens to the wives of khals when they die.

Finally, Michiel Huisman and Iain Glen discuss their search for Daenerys and the complex relationship between the two men who are both vying for her affections.