This is a rebuttal to a recent opinion piece, Why Game of Thrones passing the books shouldn’t be a bad thing. As with all our opinion pieces, the following views express do not necessarily reflect those of WatchersontheWall or its staff. NOTE: the following alludes to material from the fourth and fifth books in ASOIAF, as well as events in season 5.

Before you all throw me under the Book Purist bus, allow me to offer a perspective from a Sullied who otherwise considers herself a reasonable person with an open mind.

While most days I have to invest an exorbitant amount of energy into pacifying the Book Purist/Nerd Rage Hulkess version of myself, I have to budge ever so slightly to the fact that Game of Thrones will never be what A Song of Ice and Fire is, be it breadth or comprehensiveness, or a thorough compilation of character development/events, nor will it fulfill the grand imagery my mind created while immersing myself in the textual world GRRM has created.

Relatedly, it is difficult for me to come to terms with less-than-perfect interpretations of the sci-fi/fantasy genre. I am in the sciences, and God help me if I ever watch a sci-fi movie that tries to justify its plot with a scientific explanation that makes no sense in the real world. I have to make concessions for my pre-conceived expectations if I want to actually enjoy anything, especially book-to-film adaptations.

Regardless of my intent to make peace with these adaptations, there are still things that gripe me (and other Sullied) about the rumored plot changes for GoT season 5, which includes the fact the show is surpassing the existing published book material. While addressing a few arguments that Morgoth made in the article “Why Game of Thrones passing the books shouldn’t be a bad thing,” I will highlight a point or two that may have not been considered by Unsullied who imagine book-readers are an insane group of unrelenting, fanatic purists unwilling to accommodate for the real-world challenges of creating the television show (which is only mostly true). Please consider that even if you disagree with our incessant rants, we have just as much a right to be frustrated as you do your disposition to not give a loaded crap.

THE READER’S JOURNEY AND CHOICE

I am not one of the many Sullied who have been patiently following ASoIaF for nearly two decades. I started reading the novels shortly after season 1 ended.  There are readers who started the books long before the show was conceived in the minds of David Benioff & D.B. Weiss and baptized by the hallowed GRRM Himself, and bless those fans for holding out as long as they have. I feel tortured waiting for TWoW, and I’ve only been waiting about a year since I finished ADWD. You Unsullied only have to wait a measly nine months between seasons, you lucky ducks!

From the start of season 1, the adaptation from book to screen was nearly scene for scene save for the omission of a few flashbacks and dream sequences. Moving forward a couple seasons, some minor changes were made and characters were dissolved and mushed together in order to simplify the cast size and storyline, which was fine (e.g. Gendry fulfilling the role of Edric Storm, a bastard of King Robert Baratheon, at Dragonstone). Yet suddenly, in comes a phenomenon so far unobserved in any other fandom (as far as I’m aware). After the fourth episode of season 4 aired, Twitter exploded, Facebook memes were birthed, and lamenting cries from the Sullied rang: “WE HAVE BEEN SPOILED!” 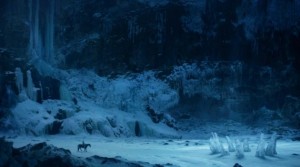 I say “spoiled” because the introduction of the “Night’s King” character at the end of the episode, and the assumption that the Great Others were turning Craster’s incestuous spawn into more just like them, have never been confirmed in book canon. In effect, the show confirmed who our Big Bad probably is. Similarly, when Olenna “Queen of Thorns” Tyrell admits to her granddaughter Margaery that she is responsible for King Joffrey’s untimely death, this confirmed a theory that book readers had been thinking for years. Admittedly, this is not a disaster. It does ruin the mystery a bit, and sometimes I find it insulting that the show has to spoon-feed some viewers who cannot read the context clues. But this does have ramifications for the future story of Game of Thrones and whether or not Sullied are privy to what is coming next, especially if we move outside the bubble of confirming well-evidenced book theories.

Based on my patrolling of comment feeds and forum threads, there seems to be a misunderstanding among some Unsullied (and Sullied, too) why this is going to be a problem. Some have argued that because it appears the writers are taking the show in a different direction than the books, any events moving forward should not ostensibly spoil book-readers. Herein lies what worries me the most: 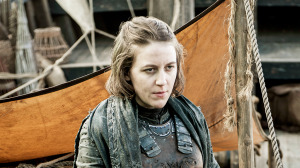 Without explicitly stating so, by omitting characters or whole plot lines, it is very possible this will inadvertently spoil who and what is unimportant to the end-game of the series, i.e. which existing plots in ASoIaF don’t matter much. A long-rumored and recently (yet unofficially) confirmed erasure of two characters called Griff and Young Griff in season 5 has caused a rift in the Sullied community. These characters, who become quite important in the ASoIaF universe, may be rendered or interpreted as unimportant if their absence from the show does not hinder the end-game. Does this mean that they are no longer relevant, and that in the books their ultimate participation in the events to come will be for naught? Another alarming change is the removal of a couple of Martells, and who knows what’s going to happen with the Greyjoy plot?

GRRM presumably has a role for each of his pawns to play. Or does he…? By removing some of them from GoT, does this mean that their actions and plot lines in ASOIAF are ultimately not consequential? The same thing can be said for keeping certain elements of the book, including the upcoming first-ever GoT flashback scene. Book readers are aware that there are other past histories that can be explored easily enough, and arguably ones that are more important, yet they have not been included in past seasons. So why put so much emphasis on this flashback, instead of others? Does this indicate its relative importance, and can this be interpreted as spoiler material? This is probably more of a stretch, but certainly not an unwarranted concern.

If these changes are not spoiler-laden, then that means GoT is turning into a beast all its own. Which would be fine, I guess, and evidence suggests this is probably true. Some people may not have a problem with this, but I happen to subscribe to the team that wants to know the source material as it was intended to be told before delving into an adaptation of it. It seems topsy-turvy to do it the other way ‘round. Bafflingly, there is no way to confirm or deny whether the upcoming events in season 5 will involuntarily spoil events to come in ASoIaF until the show ends and all books have been released. This is a vast mystery to contend with considering how long it will take for both show and books to find their endings.

THE FEASIBILITY OF AVOIDING SPOILERS AND FANDOM PURGATORY

“Stop watching the show,” you say? Well, okay. I can do that. You might even argue that avoiding spoilers in the Age of Technology and social media is feasible (something I do not agree with). But is this fair? By choosing to watch the show and not read the books, Unsullied are still guaranteed one source of material to placate their craving for the world GRRM created. If book readers elect to stop watching the TV show, then we are essentially doomed to Fandom Hell. We will have to exile ourselves from a fandom without an end-date in sight. With the introduction of season 1, anyone who read the books recognizes the 1:1 adaptation from book-to-screen. How were they supposed to know so early on that they were trapping themselves, and that such a decision — to cease participating in a fandom they love so deeply — would even be an option or required?

Certainly, there is no reason why you have to agree with me. But for many book readers the show surpassing the books will be disastrous to our reading experience and the terms in which we want to participate in the fandom. Here we are presented with limited options: 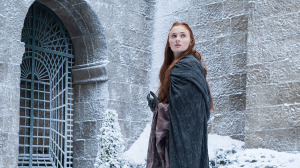 Despite all the negativity I had to offer here, there is a level of acceptance I must come to terms with. It’s a sure thing that GoT is about to overtake the timeline of ASoIaF whether the Sullied are ready to take that ride or not. I don’t know that I have the self-control to avoid the fandom altogether until the books are complete, and so the only alternative for me is one that will probably negatively affect my personal reading experience and my journey through the source material as it was meant to be told by GRRM.

Perhaps I should just suck it up and stop complaining, as I’m going to watch the damn show anyway. But I think this is a very unique predicament for such a fandom (one that is becoming more and more mainstream every season), that those who are dedicated and love the source material must make a confounding choice. Sullied must either wander into the Dothraki sea, vision encumbered by ghost grass, hiding among the reeds to fend off vicious slaughter by dragon fire, social media memes, and spoilers as sharp as arakhs; or dive head first into the politics and rumor of King’s Landing, not sure with whom to ally oneself, be it GRRM or D&D (or play the game both sides?), as well as discern which of the many whispers among fandom forums, speculative articles, and casting hints will enlighten to us whether it’s safe to drink up, or if we are doomed to poison our own wine.