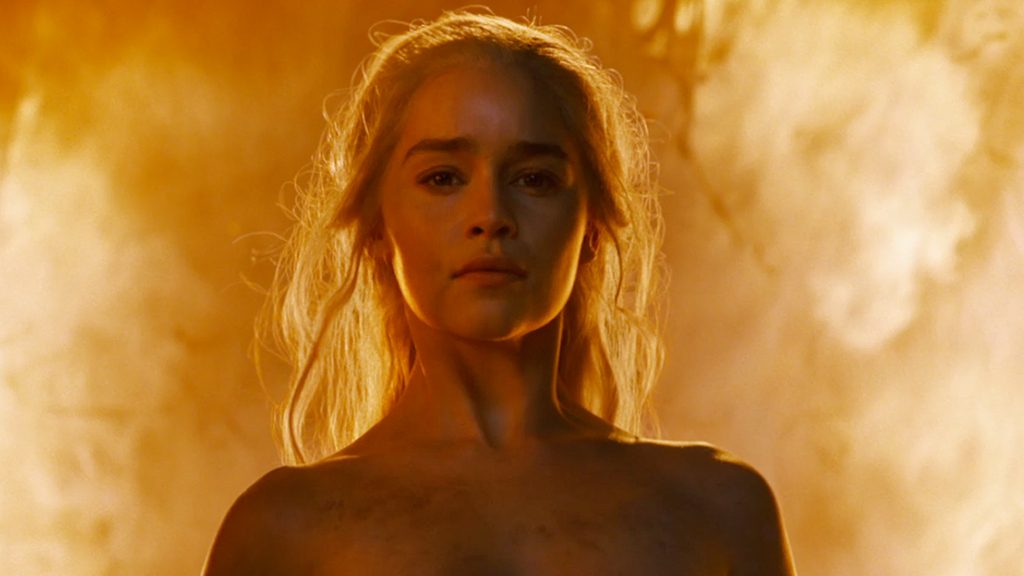 With only a week (!) to go until the premiere of Game of Thrones’ sure-to-be-epic seventh season, we revisit the explosive season 6 episode “Book of the Stranger.” Written by the dynamic duo David Benioff and D.B. Weiss, the episode was further elevated by Daniel Sackheim’s pristine directorial vision, and premiered May 15th, 2016. Featuring Daenerys’ iconic destruction of the Temple of the Dosh Khaleen, the episode will forever be remembered as the rebirth of the Khaleesi.

We pick up right where we left off in “Oathbreaker” with Jon Snow grabbing his trusted Longclaw and planning to head south- until the sound of a horn breaks his heated conversation with Edd and the gates of Castle Black open to a truly glorious sight. 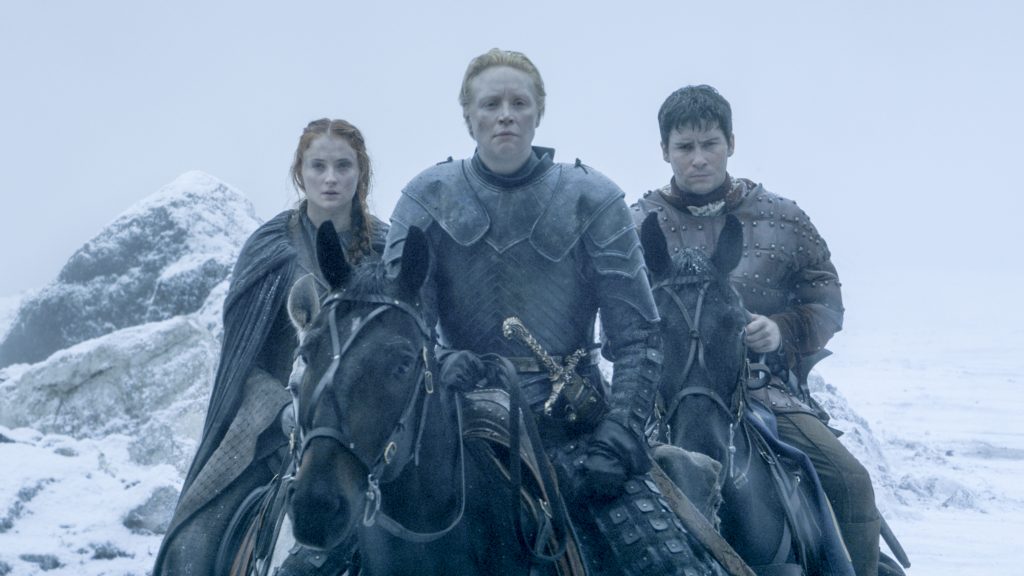 I will never tire of seeing Brienne fulfill her oath to Catelyn by serving Sansa, purely because of Gwendoline Christie’s commendable performance. Here, Tormund and I share the same look of amazement as Brienne makes her way into the courtyard. Then, despite the icy background, the audience melts as two wolf pups finally reunite.

It’s hard not to get emotional, even when rewatching the episode, after seeing the suffering the Starks have endured as the lone wolves wandered Westeros. The two share a meal and reminisce about old times, wishing they could change the course of their lives. Yet, the two still manage to share a laugh in spite of all they’ve been through and we’re assured the Starks will fight on…especially when their home is currently occupied by flesh-peeling monsters.

We also get a look into Jon’s current psyche post-resurrection and the defeatism he’s battling. After fighting for so long, he still isn’t done though he’s exasperated and hurting. Without another wolf at his side, I don’t think Jon would’ve found the strength to fight on. That the scene is so powerful is especially impressive because these two haven’t shared a scene since the first episode (in which they didn’t even speak to each other.) Despite the absence of an established relationship, the result is truly beautiful.

More reunions ensue as Brienne confronts the sorceress behind Renly’s demise and Christie continues to stagger me with her acting talents, as she displays her range, encapsulating Brienne’s thirst for vengeance and declaring herself Stannis’ executioner much to Melisandre and Davos’ horror before walking out like the BAMF she is.

Mockingbirds and falcons take flight, joining the battle for Winterfell, as Lord Royce almost flies himself before bowing to Baelish’s cunning ways. Though Robin Arryn may be the official Lord of the Vale, it’s clear who is truly in power here. His efforts save Winterfell in the end but a man like Petyr will need a hefty payment for his services which I’m sure we’ll see in season 7. Hopefully, his payment is a Needle in the eye. 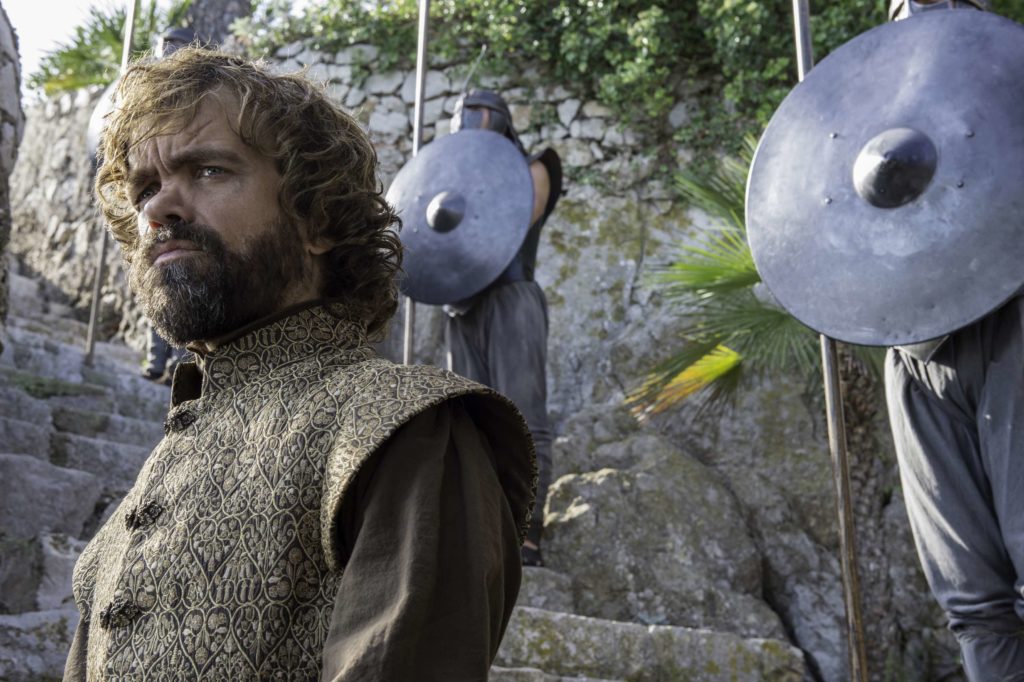 Meanwhile in Meereen, Tyrion teaches compromise much to everyone’s immediate dissatisfaction. He is a stranger to them and does not speak for their people or their experiences being someone of such privilege. However, more compromise follows as Grey Worm and Missandei support Tyrion’s ways by insisting (and quoting a “wise man” aka Tyrion), “We make peace with our enemies, not our friends.”

On the hunt for Khaleesi, Daario bros out with Jorah by bragging about Daenerys, much to Jorah’s disappointment. It’s not so much out of jealousy that his sourness derives from but more the disrespect he has for the Dragon Queen, proving he will always be Daario #2. The two partake in some rare hand-to-hand combat in Vaes Dothrak before Daario pulls out his blade against the sacred land’s laws. Thankfully, the sensible one (Queen Daenerys, obviously) has a much bigger plan and even bigger khals to fry.

In King’s Landing, the High Sparrow preaches the value of time over materialism to Margaery who quotes the episode’s theme (and title) quite aptly. “And one day, you walked through a graveyard and realized it was all for nothing, and set out on the path to righteousness. Book of the Stranger, verse 25.” Director Daniel Sackheim’s excellent work with lighting blends perfectly with this illuminating moment.

A tragic sibling reunion of the Tyrell roses contrasts the wolves’ delightful one when we see Loras truly wilted and defeated. Unlike Jon, even with his sister’s encouragement, Loras cannot find the strength to move on which speaks to how far he’s fallen. In the Red Keep, the lioness is seething with rage over the Sparrows’ tightening grip on King’s Landing when Tommen confides in Cersei the planned walk of atonement for Margaery. 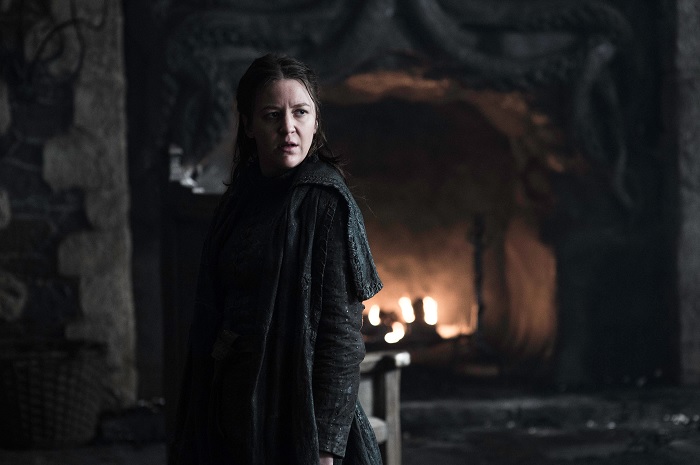 As the wise man previously said, “we make peace with our enemies, not our friends” and here is no different. I never imagined Cersei and Lady Olenna to be on the same side for any battle but the embarrassment brought on by the High Sparrow in the name of faith has been suffered enough. A rendition of “The Rains of Castamere” sets the scene as Cersei cannot help but smirk at the thought of her vengeance, especially when she’s recruited her enemies’ forces into helping.

We see another tense sibling reunion as Theon lands in Pyke. He pledges his loyalty to his sister Yara knowing she’s far more suited to rule and their relationship begins to heal. It’s a long-awaited moment for fans as Theon finally returns home and begins to ease his way back into the mighty waters of the krakens. 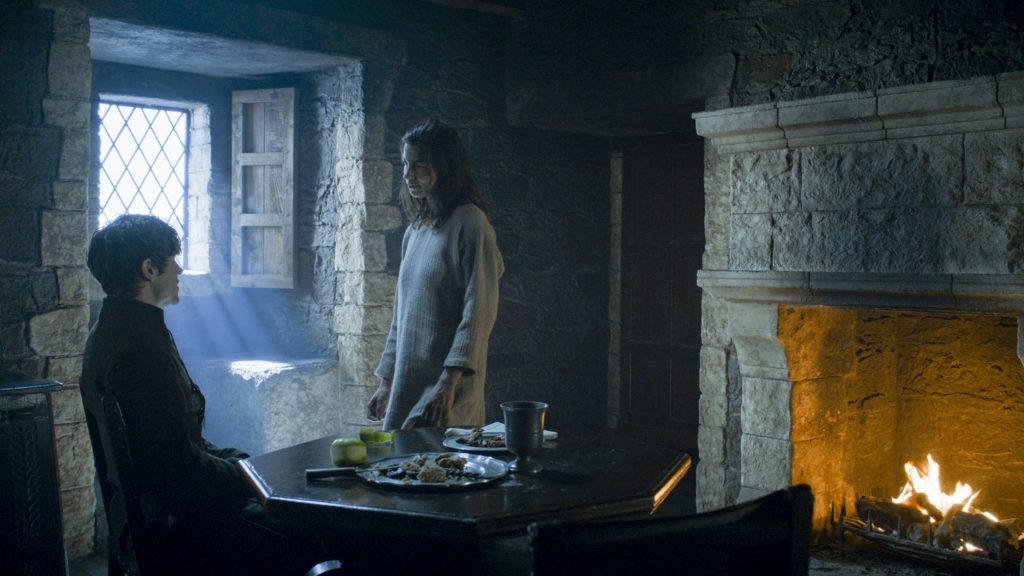 Much to the audiences’ dismay, Osha meets a monster even she can’t kill though she makes it a point to note she’s “seen worse.” Though she knows she probably won’t live, she remains as fierce as ever in her final moments trying to outmaneuver Ramsay. The tension builds as she reaches for the knife before Ramsay plunges his into her throat.

At Winterfell, a fresh ship sails! Audience members were quick to pair up the ogling Tormund with Brienne of Tarth. However, the moment received a cut as deep as the killer one we just witnessed when a vicious letter from Ramsay Bolton arrives challenging Jon Snow. He informs him of the slain direwolf and capture of Rickon setting up the highly anticipated Battle of the Bastards that we cannot wait to “come and see.”

Sansa further encourages her brother and convinces him to engage for Winterfell.

In Vaes Dothrak, Daenerys demonstrates why she’s known as “The Unburnt.” Emilia Clarke is astounding in this moment emanating the Dragon Queen’s burning confidence as she engulfs the temple and outdated ways in flames like her children would (to Ramin Djawadi’s rousing score “Khaleesi“). Needless to say, I found myself inspired in joining Jorah, Daario, and the Dothraki in bowing for my queen. 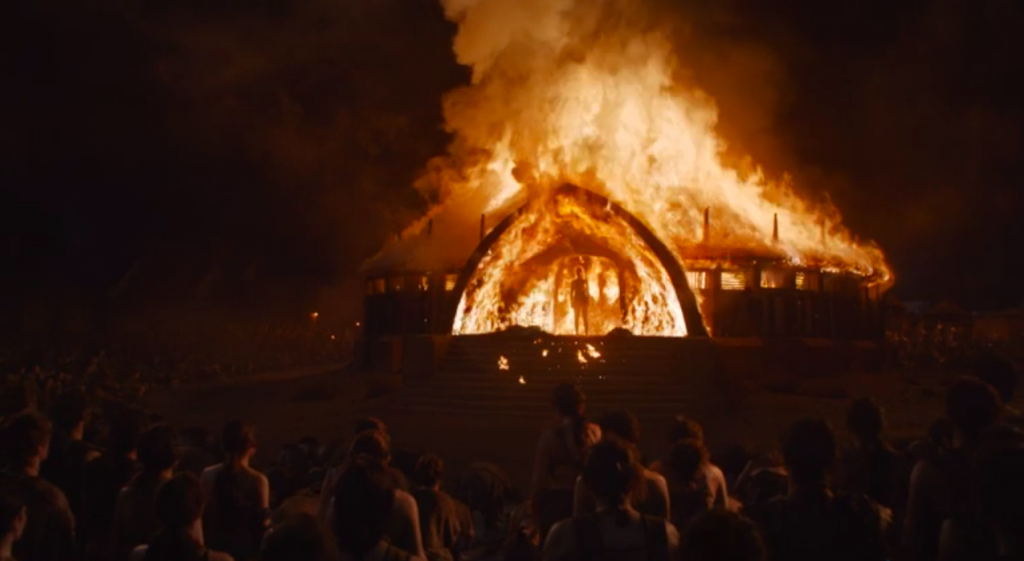 Deaths: Osha, Khal Moro, Akho, and the many fried khals.

“You are small men. None of you are fit to lead the Dothraki. But I am. So I will.” – Daenerys

“Where will you go?” – Sansa “Where will we go. If I don’t look after you, Father’s ghost will come back and murder me.” – Jon 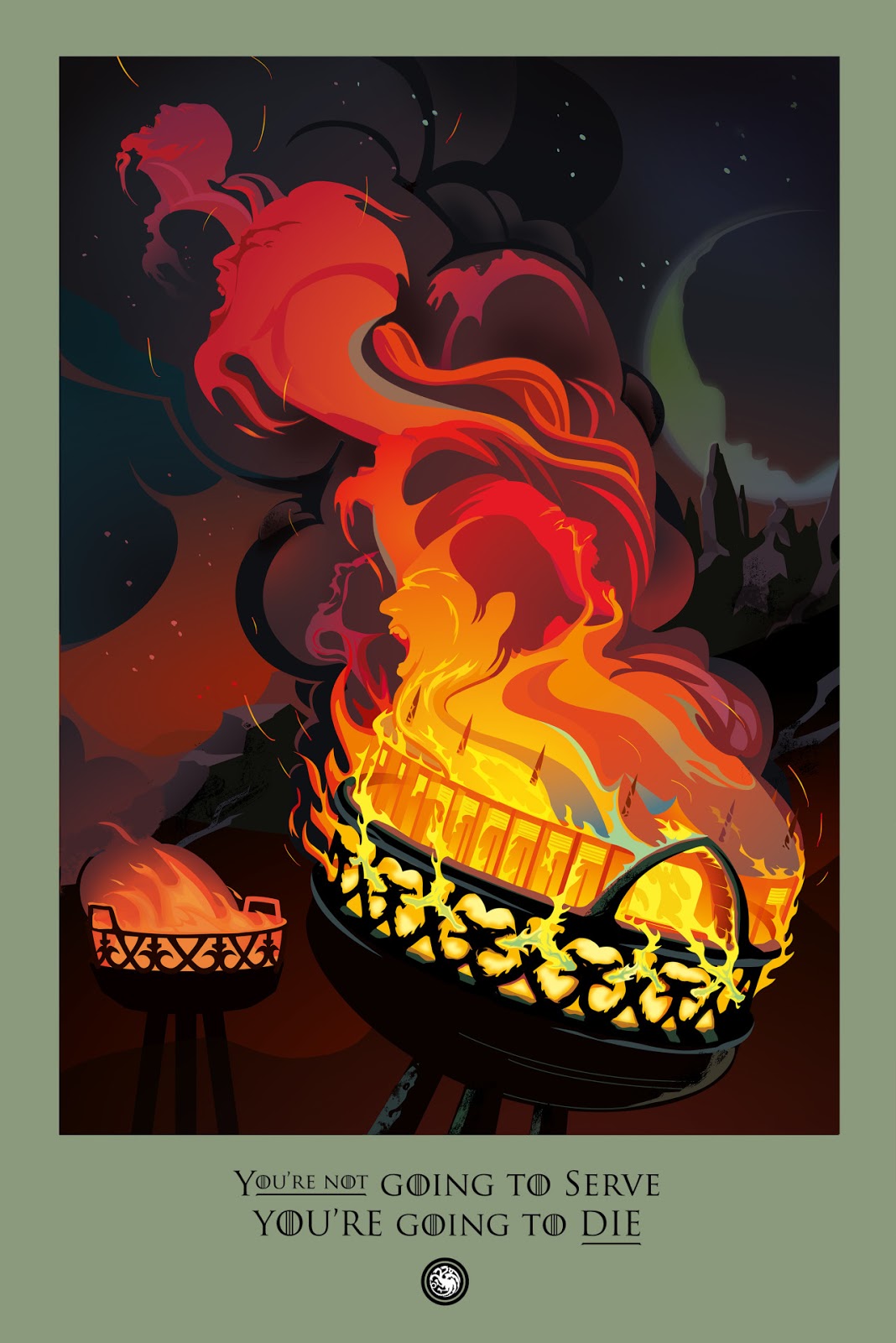 Join us tomorrow when Geoffery take us back to the revealing and heart-breaking episode 5 “The Door!”