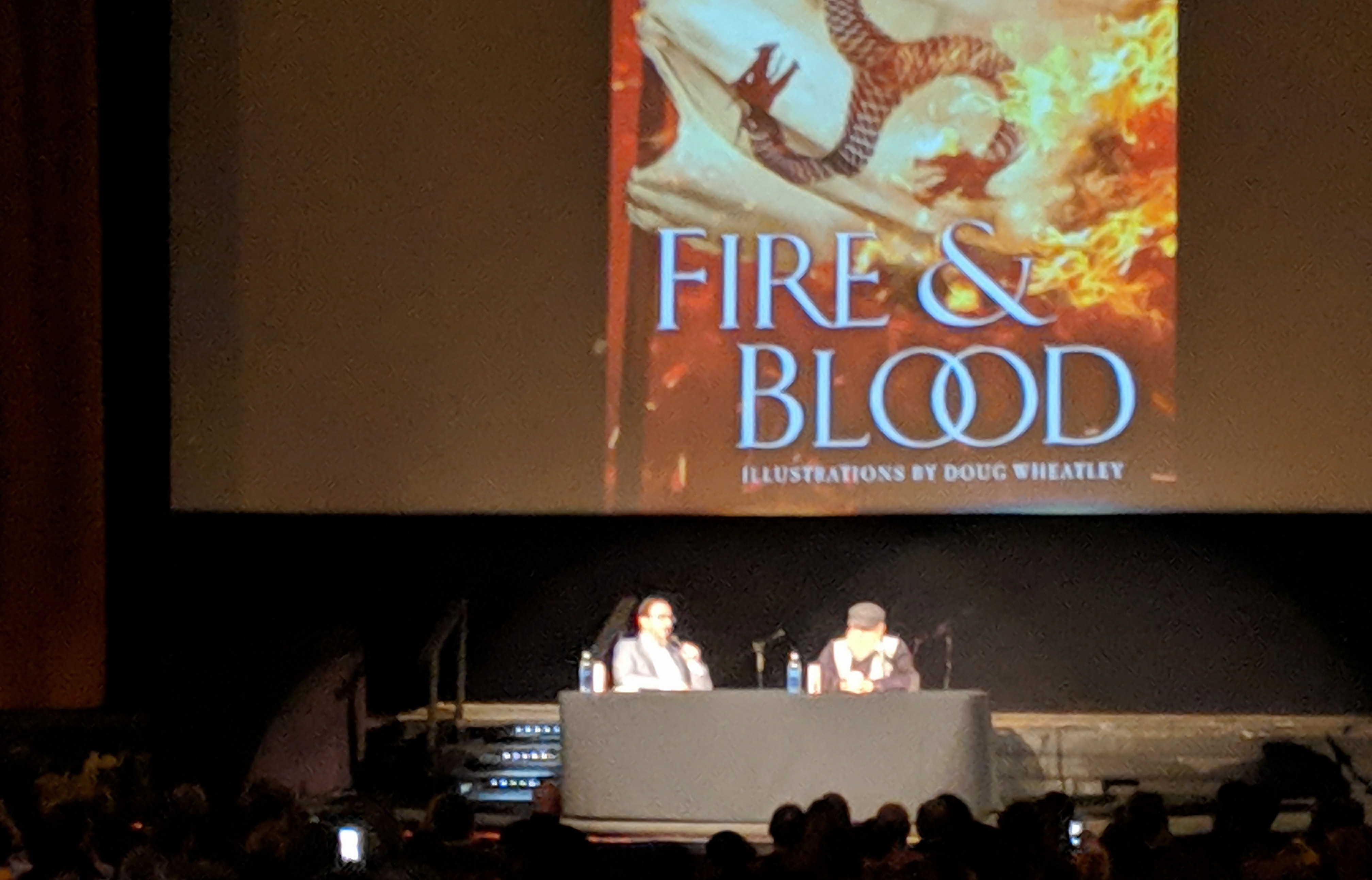 Greetings fellow Watchers! This past Monday, I was lucky enough to head down to Jersey City and attend the Fire & Blood release event with George R. R. Martin at the restored Lowe’s theater put on by WORD bookstores. I live-tweeted the event on the Watchers on the Wall Twitter at the time, but for my full account keep reading here!

The venue itself was amazing: the spitting image of old-timey movie theaters with the large black lettering on a white background and lights shining brightly in the cold night. 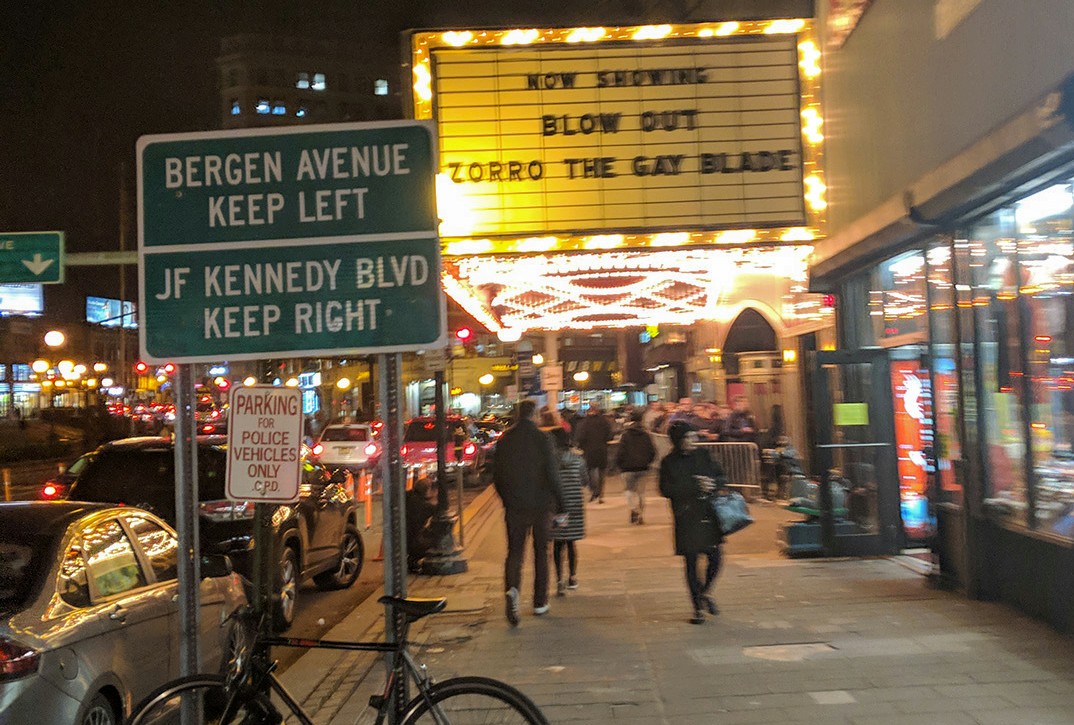 The theater seated about 1500 people at capacity, and A Song of Ice and Fire and Game of Thrones fans filled the entire place. The line to just get into the building snaked behind into alleys and down sidewalks in front of homes. Once we got inside, it was a truly magnificent sight of gold and molding that reminded me of the glory of Old Valyria. 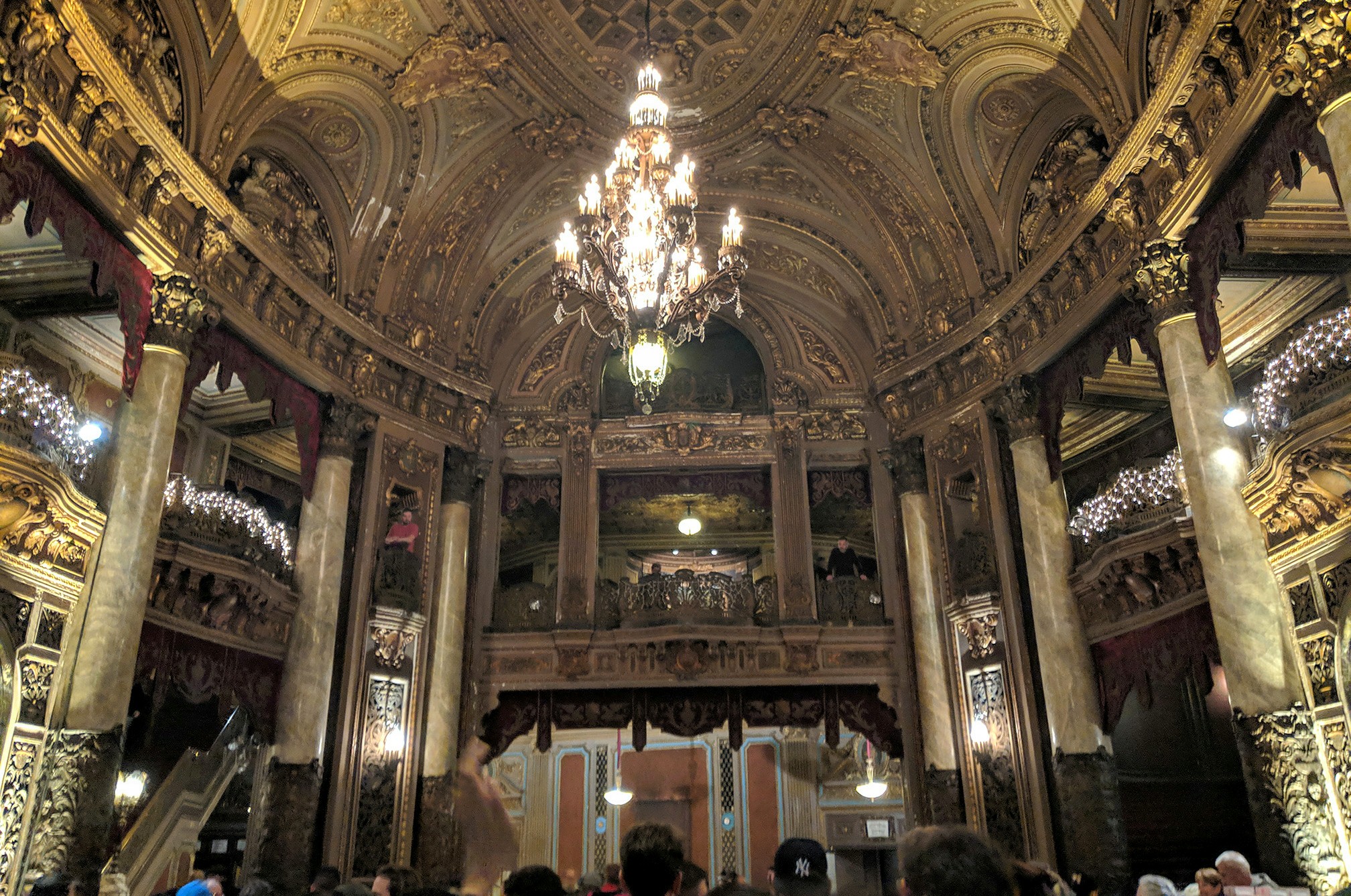 Fitting, given the book’s contents. And, of course, that book is what we were all there for, or, more specifically, the stacks and stacks and stacks of signed copies of Fire & Blood. People were grabbing their copies and instantly flipping through the illustrations as they found seats and clutched them like precious treasure. 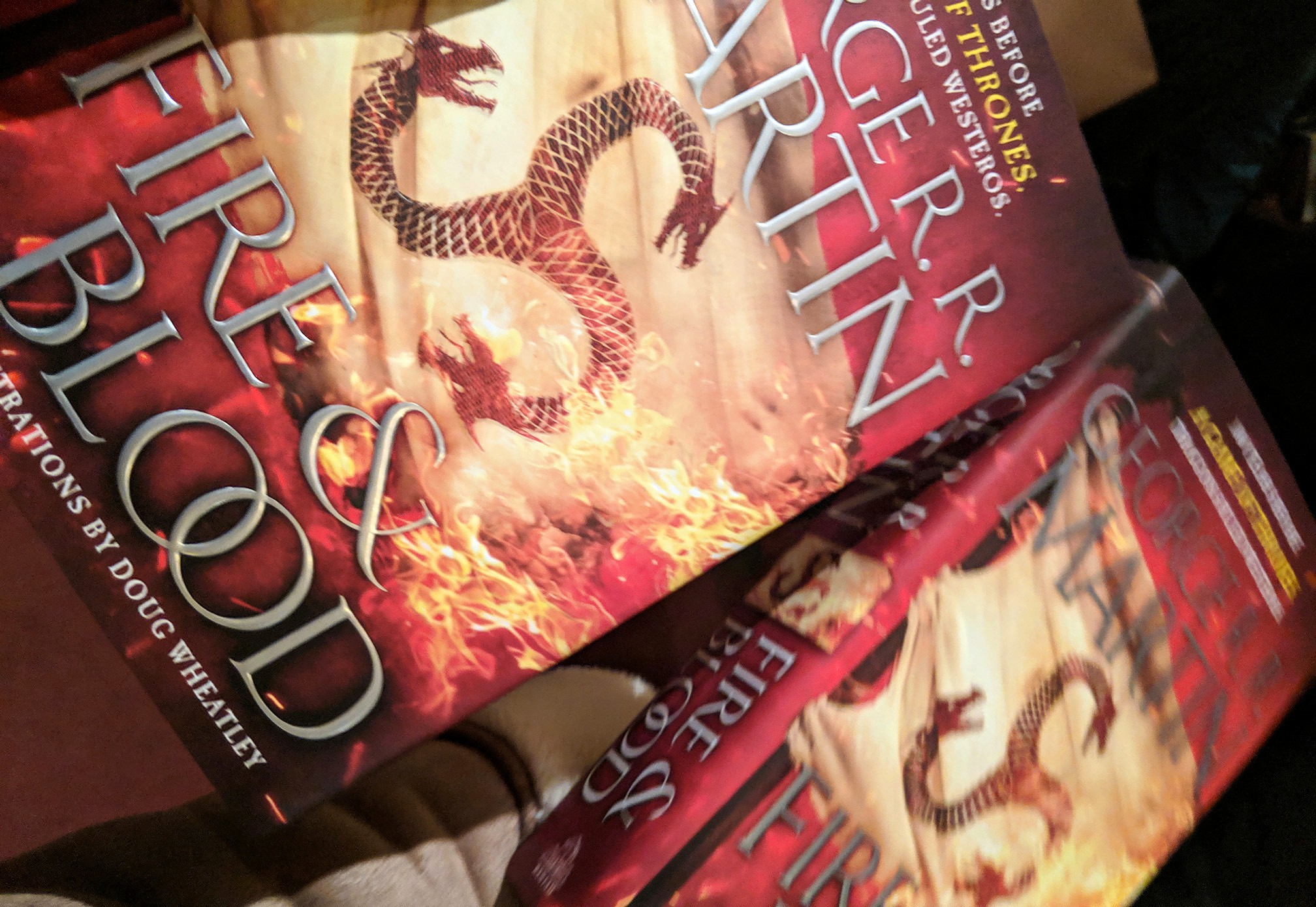 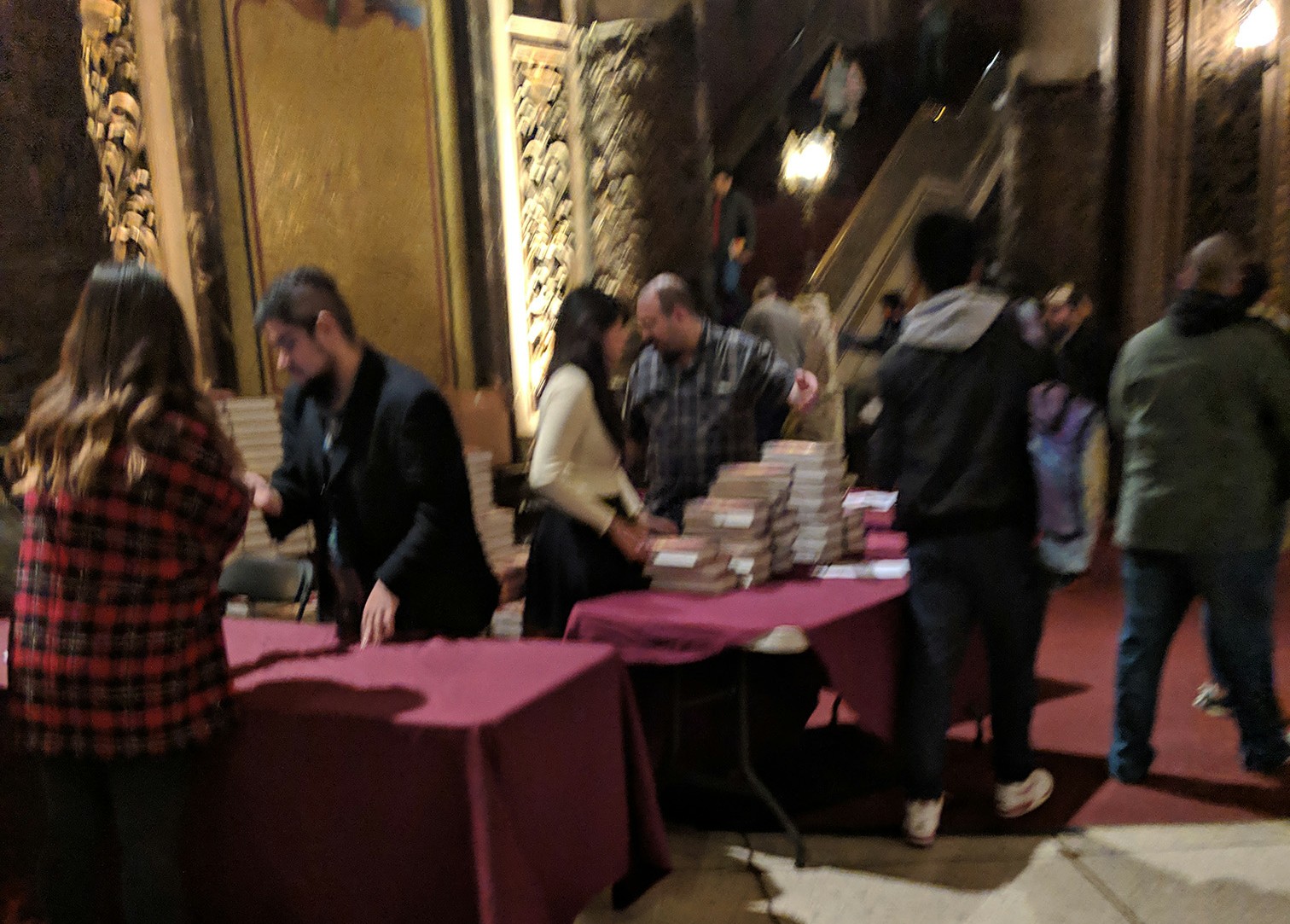 Inside the theater, a 16-year-old organist and a friend on drums were treating the crowd to Game of Thrones music, although a bit of a hush fell over the crowd when he began playing the Rains of Castamere and people scoped out where their nearest exits were. 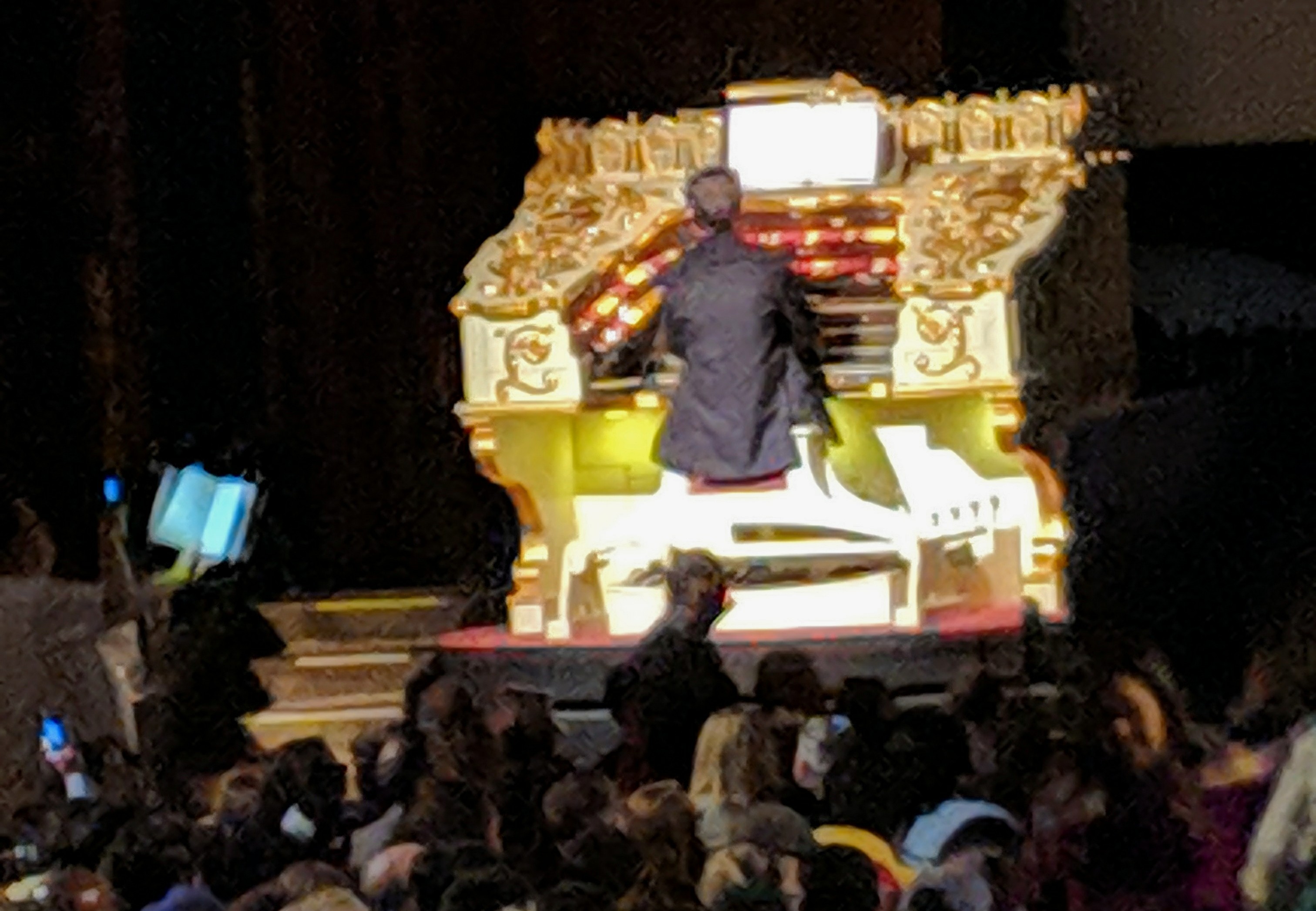 On a massive screen, illustrations from the new book (and from George’s upcoming new Nightflyers edition) were rotated through. Finally, the show began as the organ rose up and author, actor, comedian and host for the night John Hodgman came out to introduce the guest of honor, George R.R. Martin, to raucous applause and cheering.

The event moved quickly with John asking George a few questions himself, then asking questions that were gathered ahead of time. Rather than the usual George signing line where fans ask George leading questions in order to winkle out secret plot details, this event asked the attendees to submit their questions via e-mail and a handful were selected. These were the six most interesting highlights in George’s answers:

1. An update on The Winds of Winter:

George acknowledged that The Winds of Winter is late, and that he has been under tremendous pressure to try to finish his next entry in the series by the end of the TV version. But that pressure has now been lifted, meaning he likely has given up on that goal and there won’t be a surprise The Winds of Winter release before this coming season. Although optimists may interpret that he is close to finishing, and that the pressure is lifted because of that. Either way, he confirmed that he is actively working on the book still, “one page at a time.” This is contrasted though with how he described writing Fire & Blood, which he said was much easier and more fun.

George grew up in the nearby town of Bayonne, and received a few questions on his relationship with the town he left behind and how it showed up in his novels. While at first George downplayed any connections, he eventually offered up some interesting information. He grew up poor, living in projects and going to public school but he was aware that on his mother’s side of the family there was once wealth and success. The Bradys were prosperous members of Bayonne for many years until they were crushed in the Great Depression and never recovered. Their legacy in the town though survived. Across the street from his home in the projects was a dock called Brady’s Dock named after George’s ancestors who built it to support their construction business. George even knew the fancy house his mother grew up in. He used to dream of what it would’ve been like had the Brady’s wealth and success continued, how would his life change?

This theme of fallen families is one that made it directly into A Song of Ice and Fire, George explained, in the characters Daenerys and Viserys Targaryen. With that same feeling of loss of a future, wondering about the family he never knew and their upper class lifestyles, he felt like disinherited royalty much like the two Targaryen siblings. When Dany reads about Westeros in the books she received from her wedding, or when Barristan told her stories about her brother Rhaegar, or she lands in Dragonstone and walks in her family’s home those are actually George wondering about his own family and dreaming of a better life stolen from him in the projects of Bayonne.

One of the questions he received was who is George’s favorite Targaryen monarch of all. His answer is unsurprising given the book that was just released: Jaeherys I, the fourth King of Westeros. Jaeherys the Conciliator, as he is better known, ruled over the greatest period of peace and prosperity that the Kingdoms have ever known. But George then said he skipped over Jaeherys in his previous fictional history book, The World of Ice and Fire, because he thinks peace and prosperity are boring. As a result, in Fire & Blood there are huge sections of the book dedicated to Jaeherys and his wife Good Queen Alysanne with many plots, murders, and conflict undercutting the “peace” we’ve been told before. Whether George is experiencing some recency bias with how much he’s written about Jaeherys lately or if he really loves writing about “great” kings with an unexpected amount of conflict, he did not elaborate. But as you read about Jaeherys in Fire & Blood, it’ll be an interesting thing to keep in mind.

A question from John was concerning the end of Game of Thrones and the upcoming prequel shows that HBO is currently developing and how much they will match up with George’s written works. George confirmed that there are five in development, with the one he’s been calling “the Long Night” currently greenlit and due to begin shooting in Ireland, although he quickly corrected himself and said that HBO has asked him not to call the show that, as it’s not the official title. He went on and described his relationship with the new showrunner Jane Goldman. He said they have met and discussed the new series and communicate regularly, and that he’s a massive fan of Jane’s, implying he has trust in her taking on the ambitious project. However, George stopped short of really answering the question of how much Goldman’s show will match George’s ancient history he’s written already and what is in his head. He went on and said that he will not be as involved in this project as he was with the early seasons of Game of Thrones. Peering between the lines, we may be getting a picture already that George’s world will not be translated point by point for the new series about the Long Night not called the Long Night, and that the content of the series maybe be more out of his hands, more like during the later seasons of Game of Thrones than during the beginning.

5. The Septon, the Maester, and the Fool:

Within Fire & Blood, different sections of the book are written or sourced by multiple characters. Some come from a Maester, others from a Septon, and others from the fool Mushroom who served in the King’s court from the reigns of Viserys I to Aegon III. George has said he set up the book this way because, as someone who enjoys learning about history, the near constant problem is which account of events you decide to trust. He used the example of the Black Dinner in Scotland, the inspiration for his own Red Wedding, which has grown in the telling over time, though the basic truth of the murder at a dinner remains the constant.

Sorting out biases and finding the true narrative among disagreeing primary sources is extremely challenging. He has recreated that in his own history book. As you read you’re supposed to question who is telling you the information contained, think about who the account was written for, and the motives behinds the men holding the pens. Martin went onto to add that when he was a child he loved learning about fantastical stories from history like George Washington chopping down the cherry tree and, even though as he grew older he learned many of those “facts” and stories were often flat-out untrue, he preferred reading those anyway. As such, in Fire & Blood and The World of Ice and Fire, there are many exaggerations that make for better stories than fact, so we as readers should be on our guard for moments when we’re presented with a simple, boring answer and an enthralling one. The enthralling one is far more likely to be untrue.

The last “question” George received was more of a statement a fan asked to be read. The full text can be found on the Twitter page of the person who submitted it. Essentially, he apologizes to George for the bad behavior of fellow fans who take every opportunity to badger him about his rate of progress, and says we love and appreciate his efforts and the gifts his fiction is to us all. After it was read aloud, the audience gave its biggest cheer since George had walked out on stage and the man himself soaked into the positive energy in the crowd. It’s a message we should all remember.

I met many great fellow fans and, later into the night, at a nearby bar, had a blast celebrating the release of another of our favorite author’s entries into the A Song of Ice and Fire series. The book itself is available now for purchase and, as a fellow fan, I strongly suggest you pick it up. It’s worth it for the beautiful illustrations alone, which were obviously drawn with the utmost care, aside from the amazing writing content.