Brewery Ommegang and HBO unveil new Game of Thrones-inspired ale! | Watchers on the Wall | A Game of Thrones Community for Breaking News, Casting, and Commentary 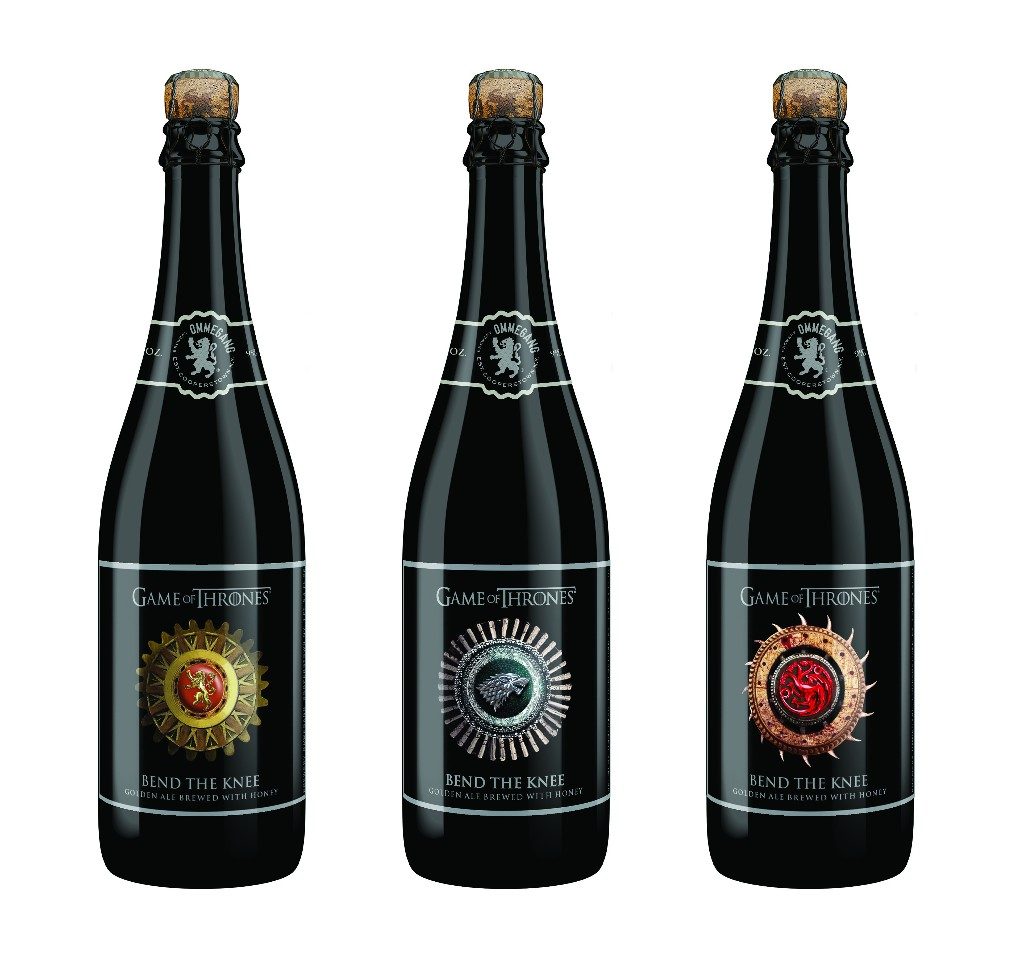 Cheers to the freakin’ weekend! HBO and Ommegang Brewery have collaborated again to bring us another distinct new ale in preparation for the seventh season of Game of Thrones. Fans will be able to pledge their loyalty to House Stark, Targaryen, or Lannister with the Bend the Knee Golden Ale.

Available just in time to celebrate Memorial Day weekend, Bend the Knee will be available on draft and in a series of three collectible 750ml bottles shown above, and will retail at $10.99 with a 9.0% ABV. Brewery Ommegang President Doug Campbell reflects on the inspiration for the new brew:

With this next Game of Thrones-inspired release, we wanted a beer and a pack that was fit for a king… or a queen. Drawing from a rich Belgian brewing tradition, Golden Strong Ales are deceptive due to their unique combination of extreme drinkability and relatively high alcohol content. Bend the Knee walks that line, while also incorporating the delicate flavors of honey into the mix. The subtle noble and floral hop contribution adds to its delicateness, and the beer finishes smooth and dry.

We love the idea of a golden ale to kick off the summer and to keep fans engaged as they wait for Game of Thrones to return. With the story focusing in on these three major houses—Stark, Lannister and Targaryen—we’re excited to give fans the chance to align themselves with their favorite house as they sip this latest brew.

Bend the Knee is brewed with pils malt and flaked oats and hopped with Saaz, Bravo, and Styrian Golding hops. It pours a golden hue with a large, frothy head. Both the aroma and flavor mix maltiness and citrus from the hops, while Ommegang’s signature house yeast produces prominent fruitiness. Wildflower honey added during fermentation provides light sweetness to the beer, which finishes dry and with firm hop bitterness.

Sounds delicious and aptly timed! Bring it on, Ommegang!

Will you be celebrating Memorial Day weekend in a Westerosi fashion with these new ales? Leave us a comment letting us know!