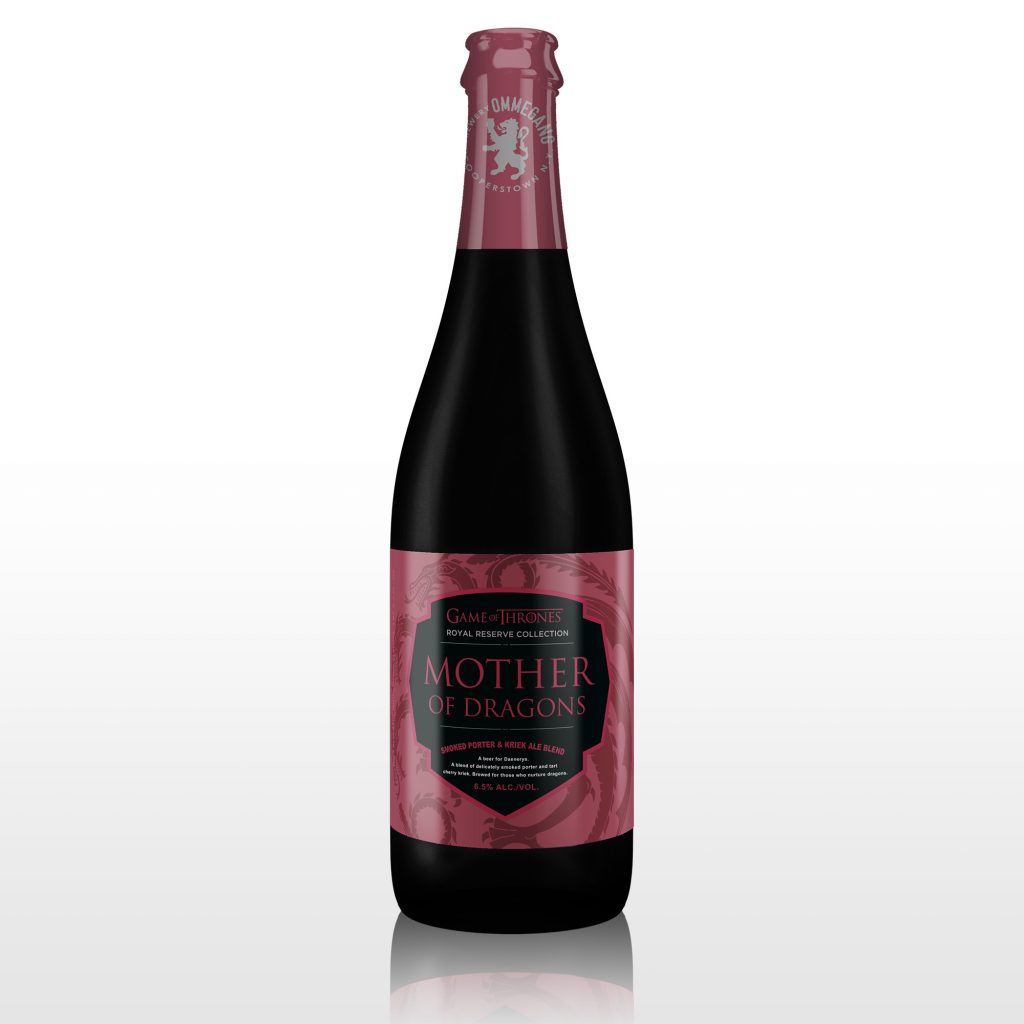 Welcome, friends, to the arrival of another beer from Brewery Ommegang and HBO, with your trusty Watchers on the Wall beer reviewer to give you a first taste. Mother of Dragons, the third beer in the limited release Royal Reserve Collection, is a blend of smoked porter and cherry kriek brewed in honor of Daenerys Targaryen, or to use the fancier official description:

This blend of a smoked porter and a Belgian kriek represents the smoke and fire that Daenerys has unleashed on her opponents during her ascent to conquer and rule the seven kingdoms.

The bottle’s label describes it as a “delicately smoked porter,” and the key word here is “delicate” (more on that below). Speaking of the bottle, Mother of Dragons is probably cool enough to justify purchasing the beer, with a rich, crimson, shiny label with the Targaryen sigil in the background.

When poured, the beer was a Coca-Cola color and smelled like boozy cherries but it did not taste like a cherry or fruit beer. There is a hint of bitterness in the aftertaste. Due to the color, description and inspiration, I thought it would be a very aggressive beer but it’s easy to drink. The flavor, as per HBO:

Aromas of chocolate covered cherries intertwine with subtle smoke and roasted malt. The flavor is rich with tart cherry up front leading to a center palate of semi-sweet chocolate then resolving to subtle smoke and mild sweetness. The mouthfeel is luxuriously creamy and full, and the finish is semi-dry with lingering notes of smoke and cherry sweetness.

The more you drink it and let it settle, the more bitter it becomes, though it is never overwhelming. I also noticed as I kept drinking it from a clean glass that there was a distinct coppery/metallic smell that you could not taste, but was a little disconcerting at times because I thought I had cut my lip or something. Nope! Just an interesting facet of this particular beer, and one that I’ve experienced with others like it.

Mother of Dragons doesn’t have the same robust flavor as some of the other beers from the Brewery Ommegang Game of Thrones collection, such as the previous Queen of the Seven Kingdoms Cersei brew in the Royal Reserve quartet; it is definitely a different kind of beer, so those who don’t like a sour or yeast beer might find something enjoyable here.

I personally like it, but it’s not my favorite beer Ommegang has put out in this collaboration, or even my favorite beer in the Royal Reserve collection thus far (I’m on my third or fourth bottle of the Cersei sour beer). I always advocate trying these beers, but please be aware of the differences in flavors, etc. if medium to dark beers are not your scene.

Mother of Dragons is available now for purchase in those beautiful 750ml bottles and on draft (which I always recommend), and we would love to hear what you think of it here! And thank you to Brewery Ommegang and HBO for sending us the beer for consideration for this post. Stay posted here for the announcement of the fourth beer in the Royal Reserve collection!