The final Game of Thrones Hall H panel at San Diego Comic Con may not have delivered any big revelations, but the con did provide an opportunity to show off the newest GoT merch and it brought out the show’s stars for a round of appearances and autographs, as always. Here is the panel recording, and the new products we have to look forward this year! Thankfully, the official Game of Thrones/HBO Facebook saved us all a trip to California by snapping pics of all the major GoT-friendly booths at SDCC. Let’s have a look!

USAopoly offers a sneak peek of their custom Game of Thrones chess set (booth #1028), coming soon and available for pre-order now. I love the look of this and I’m pretty excited about it. 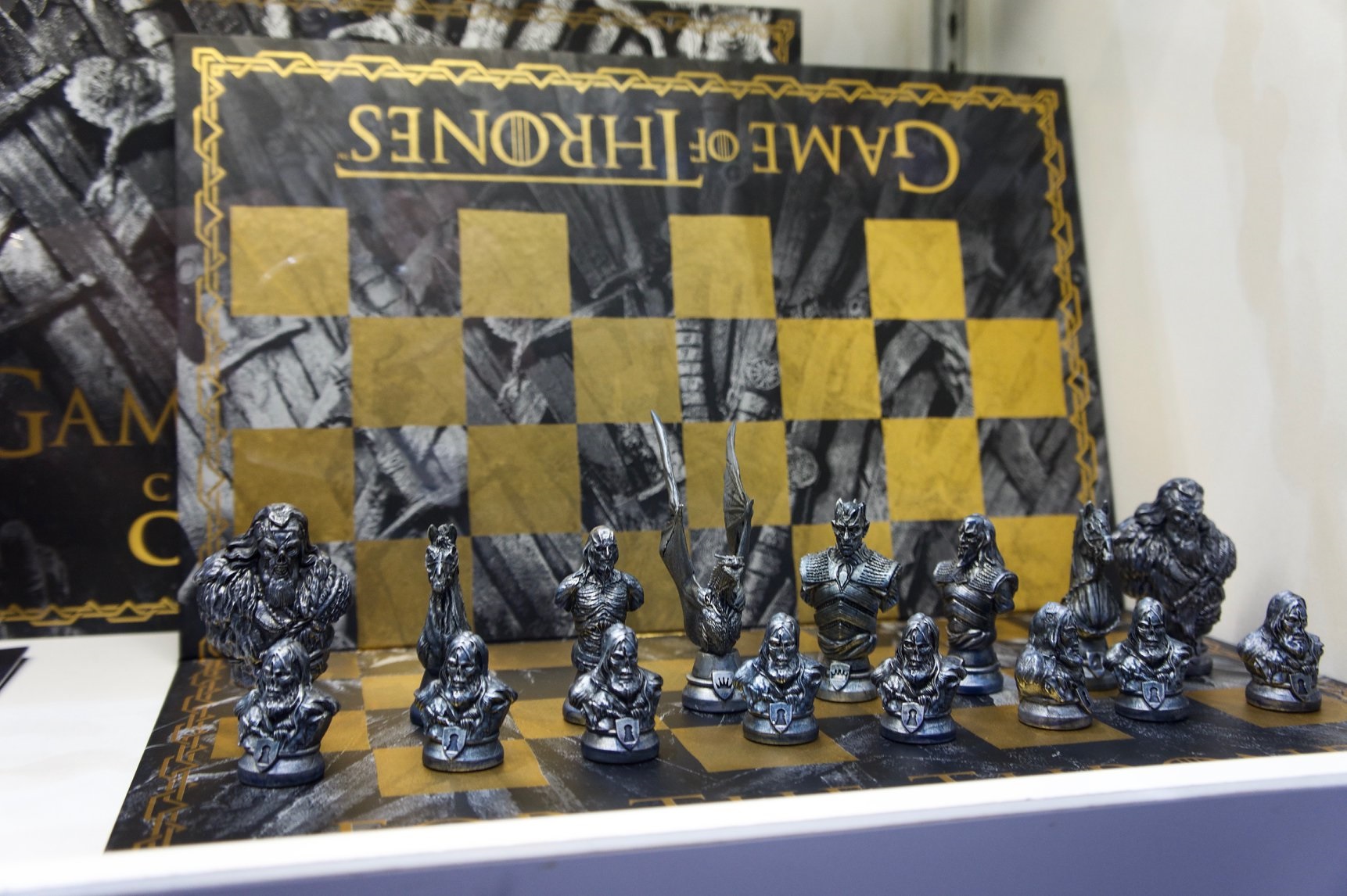 The Chronicle Books booth ( booth #1506) displays several items, most of them already available such as the coloring book and Twin Pin sets. The new item is Game of Thrones: A Guide to Westeros and Beyond, The Complete Series, by Myles McNutt, available for pre-order currently and set to be released in November. Chronicle’s site describes the book as offering a “a unique and exciting visual exploration of the world of Game of Thrones,” and says the book is filled “with bold infographics, illuminating timelines, stunning photography and insightful essays.” 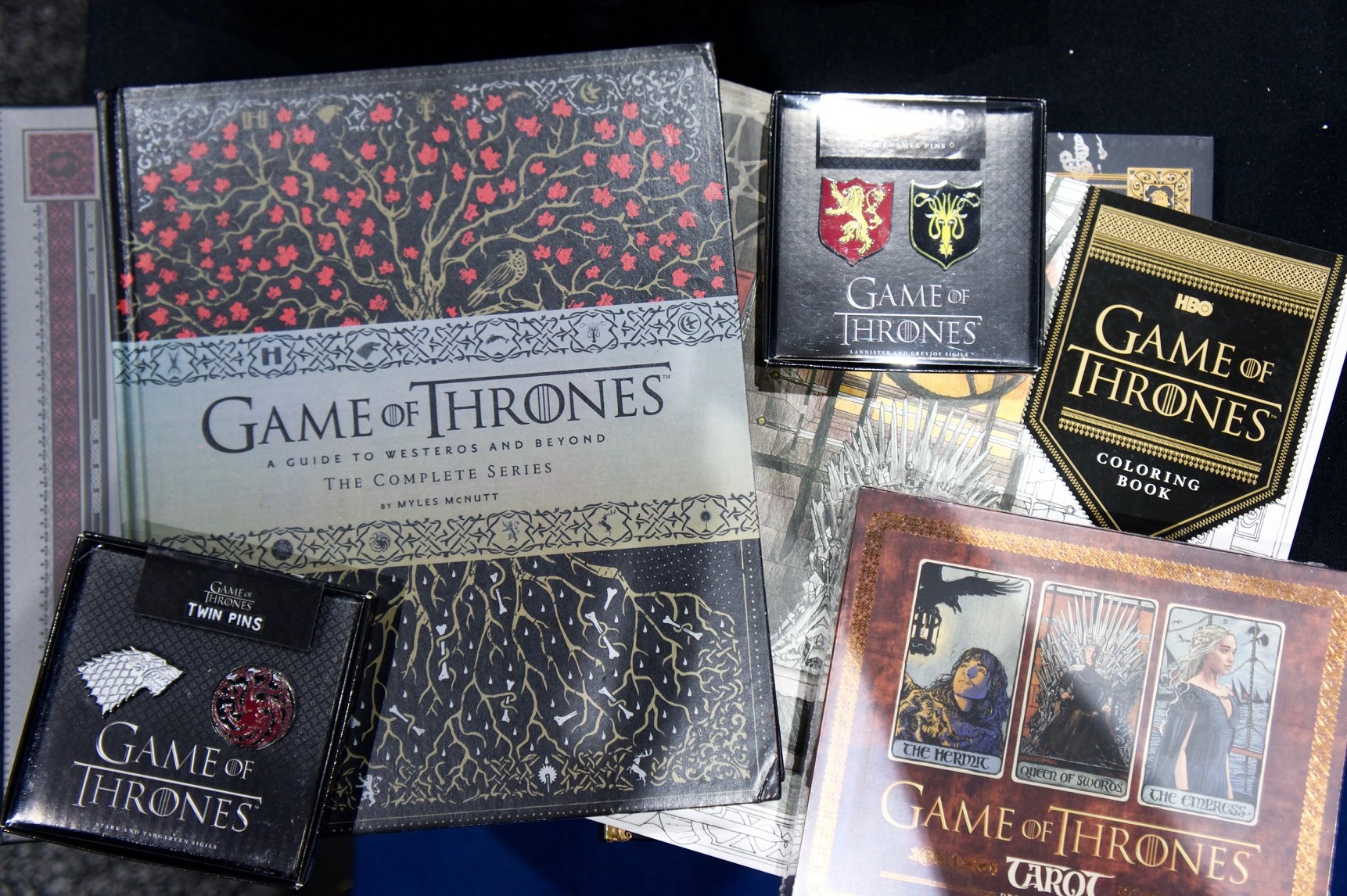 Check out the new Mega Construx sets at Mattel’s booth (#3029) featuring a full battle of ice and fire: 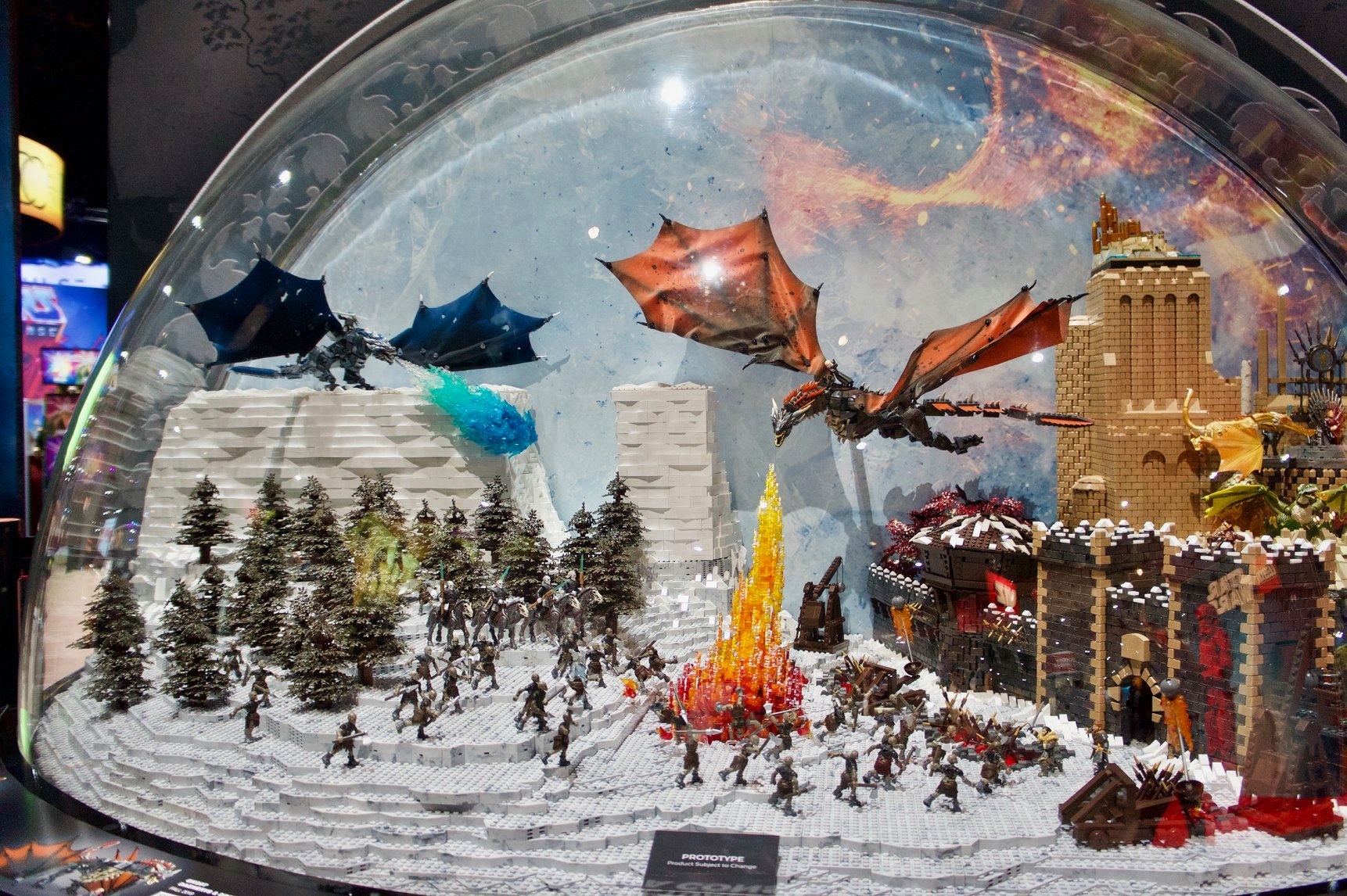 Take the Iron (gold?) Throne for yourself at Factory Entertainment’s booth (#2743), and enjoy their other Game of Thrones-inspired pieces while you’re there. 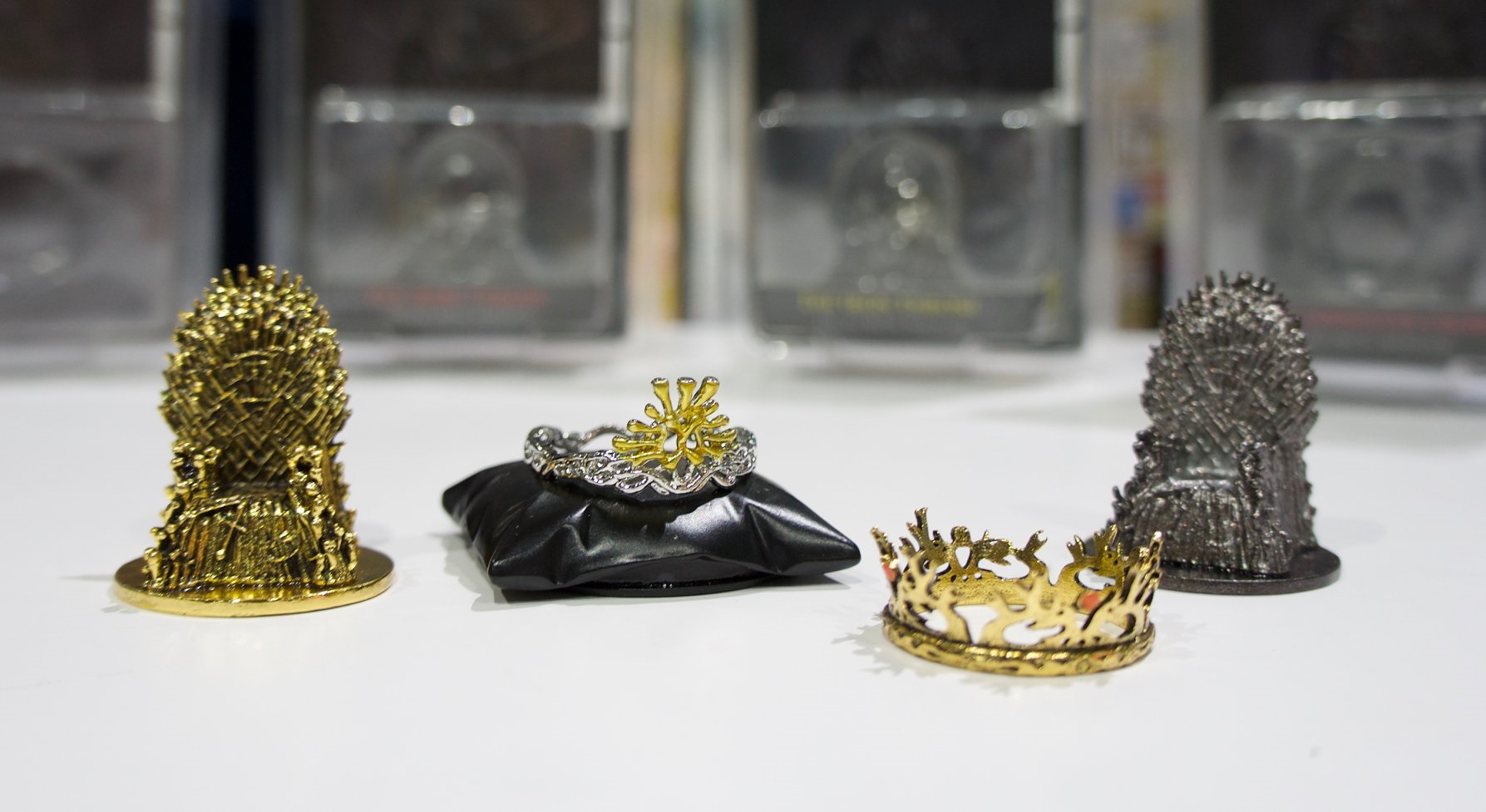 Insight Editions has an attractive array of merch on display with Game of Thrones: The Storyboards, by William Simpson, The Photography of Game of Thrones, Lovepop cards, and Dragon Egg candles. 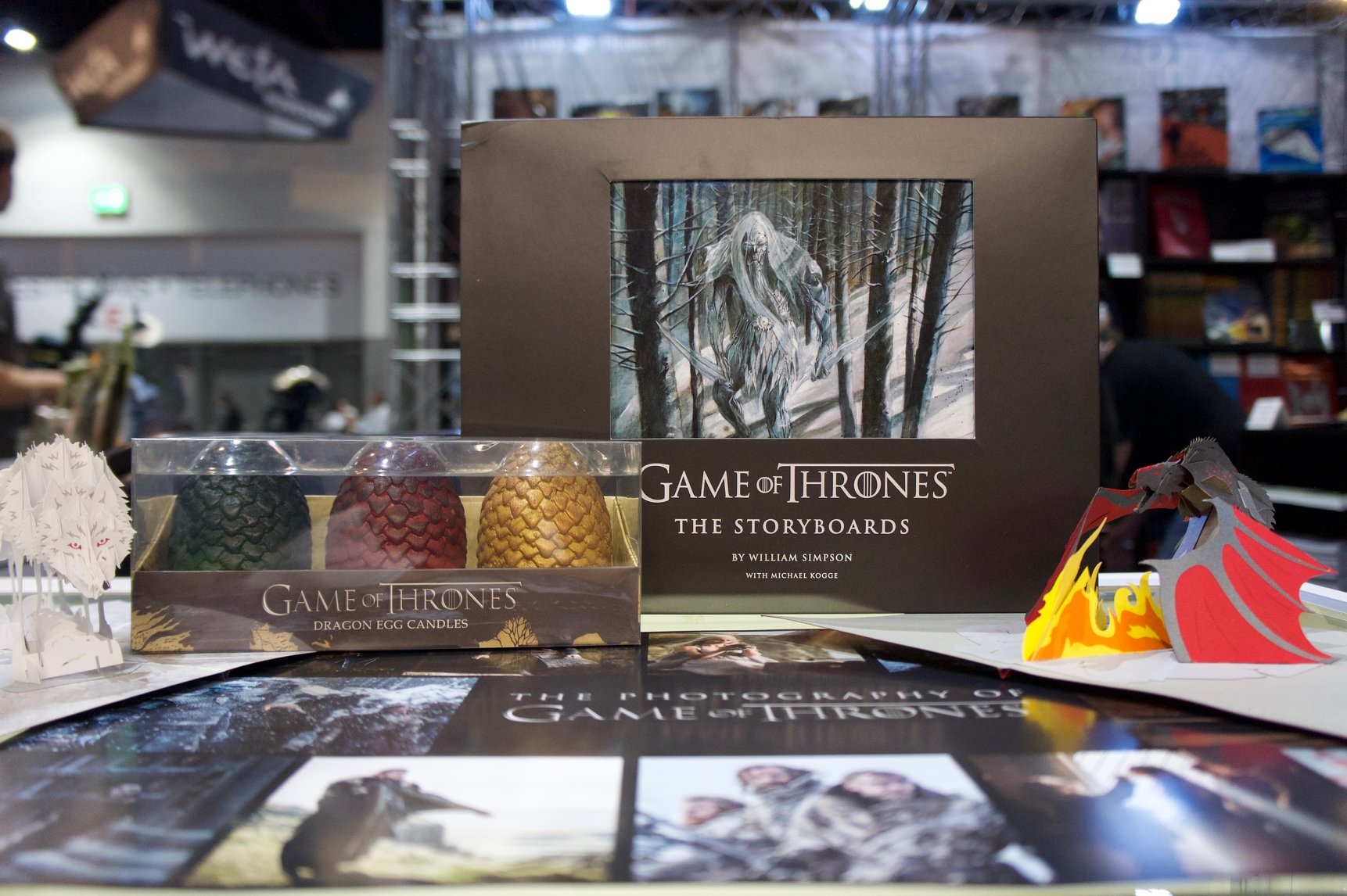 Swing by booth 2544 to check out these new GoT figures created by The Loyal Subjects. 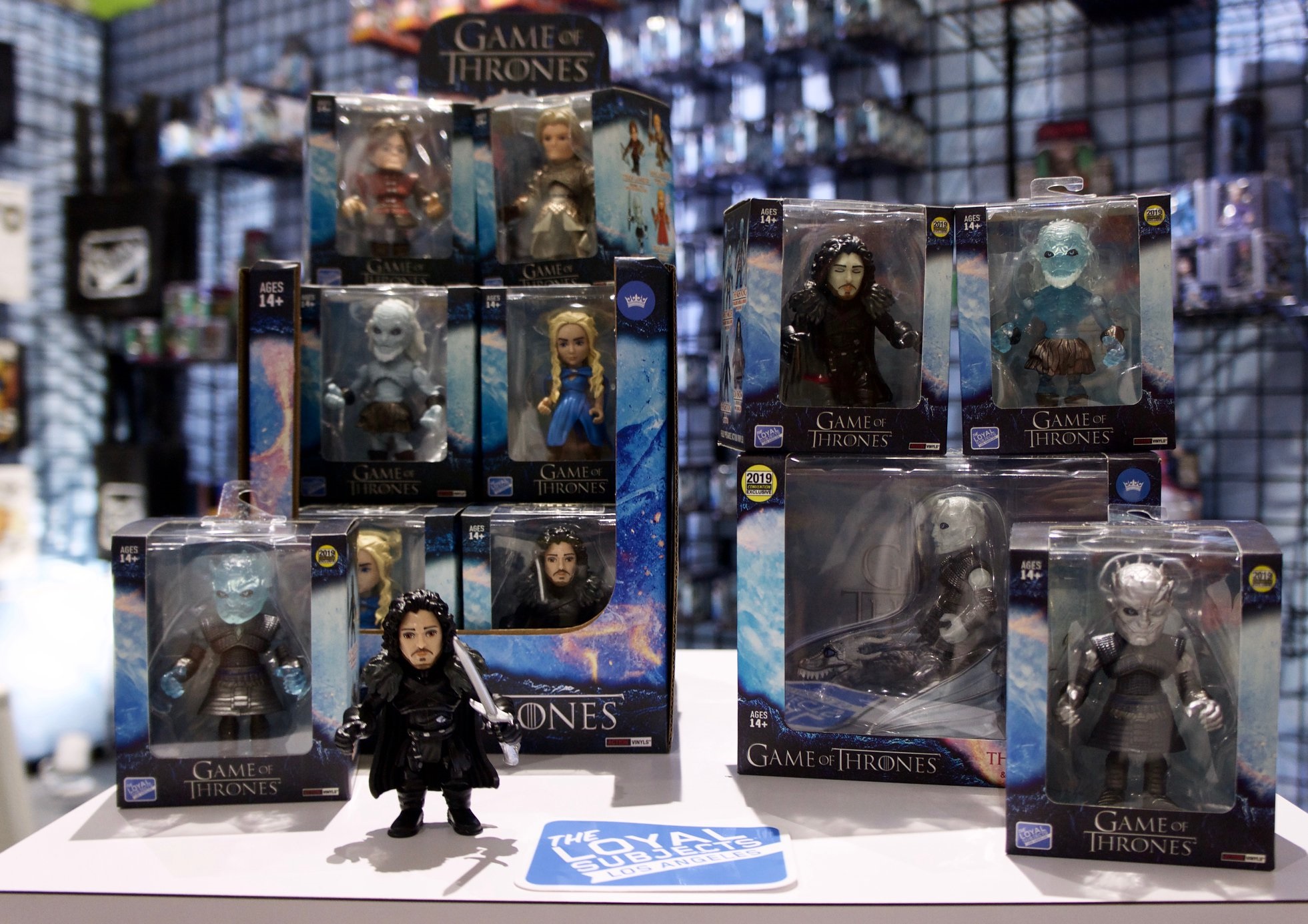 There’s a detailed new Daenerys figure at the McFarlane booth (#917). The 6-inch scale toy is available now. If House Stark is where your allegiances lie, head over to booth 2615 to check out the Stark Sigil Mini Sculpture from Dark Horse Comics. 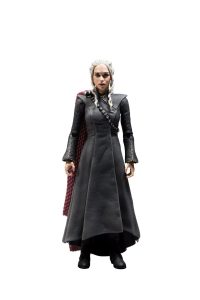 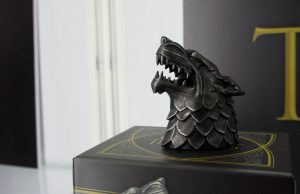 Three Zero is continuing its incredible collection of Game of Thrones figures with Season 8. Visit them at booth #1929. 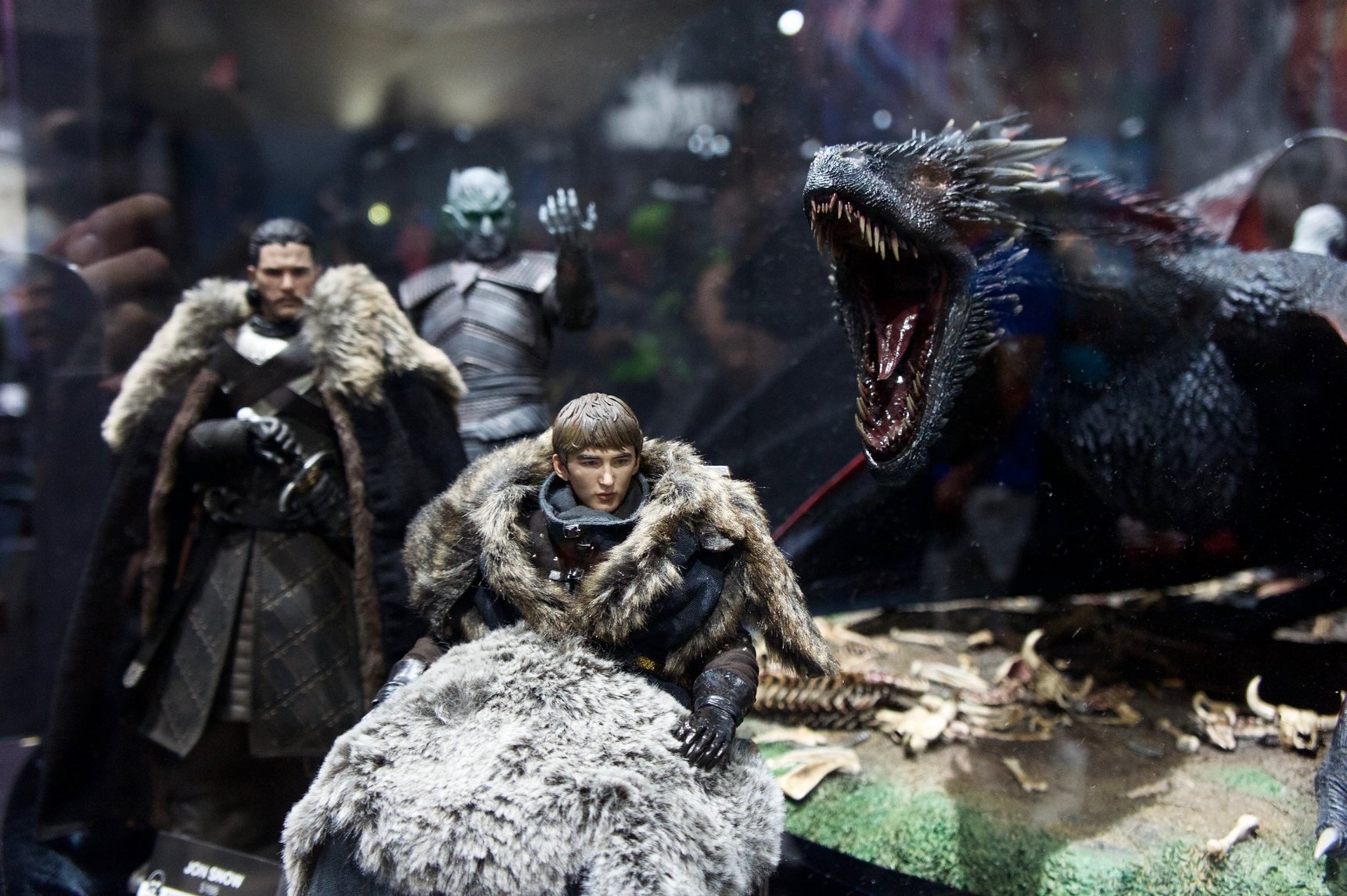 Titans is showing their new products including this exclusive three-pack of dragons at the con: 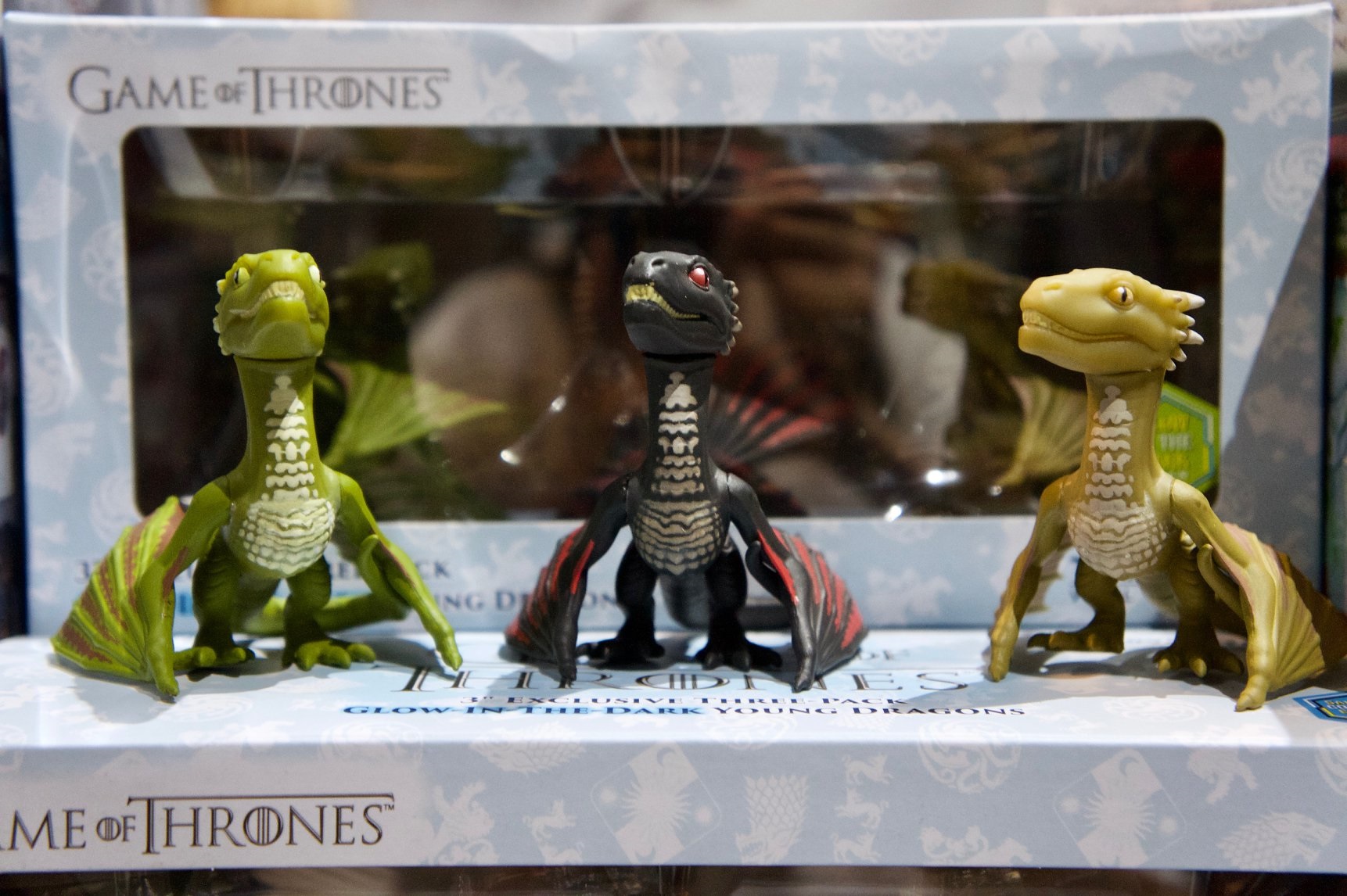 On Friday, at 5:30PM Pacific time, Game of Thrones stars Isaac Hempstead Wright, Conleth Hill, John Bradley, Maisie Williams, Jacob Anderson, Liam Cunningham and Nikolaj Coster-Waldau took to the stage in Hall H with Entertainment Weekly‘s James Hibberd acting as moderator. The cast did not field any audience questions this year (probably wisely since people were booing early on in the panel; not sure why anyone thought they would allow a Q&A after that?) but responded to a light set of questions. The cast seemed to have a good time, as they usually do when gathered. This appears to be a lighthearted and somewhat tentative victory lap rather than a serious postmortem. Given the hostile vibe from a portion of the crowd, it was probably a strange thing to walk into, as a moderator, an actor, or as a viewer. Overall, the cast handled themselves deftly.

Frankly a lot of media outlets have been twisting some of the comments from cast with their interpretation so I think it’s best to watch the panel for yourself to see what they had to say. 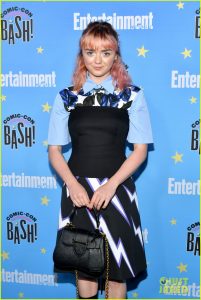 But yes, Jacob Anderson did confirm once again that Grey Worm has a dick. No balls, but dick. Anyway!

The cast swung by TVInsider for a fun round of photos and EW has a great photo gallery of photo highlights from the panel before and after. Meanwhile Maisie Williams is living her best life, attending afterparties and looking the cutest.

Safe to say there will be no Thrones-ian presence at SDCC next year! (Unless you count the inevitable panel for The Eternals– good on you, Richard Madden!) Some of us were speculating at Con of Thrones about the release of the GoT prequel, assuming the pilot is successful and ordered to series. We probably won’t see a spinoff-connected SDCC panel until 2021 at the earliest, would be my guess.