Battle aftermath, Eve Best, and new Velaryons spotted as 'House of the Dragon' filming ramps up! | Watchers on the Wall | A Game of Thrones Community for Breaking News, Casting, and Commentary 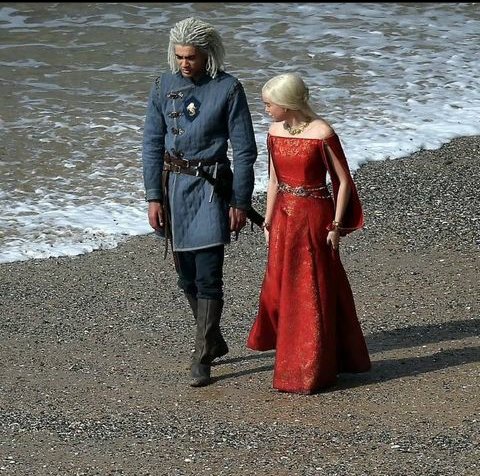 Milly Alcock, right, as young Rhaenyra Targaryen, and an unnamed actor likely in the role of Laenor Velaryon.

Corpses on the beach! Tyroshi pirates! Our first glimpses of some important Velaryons! Filming on House of the Dragon has been sprinting along nicely as of late and as the kids say, we’re here for it.

We were gifted with an absolute slew of photos from imgur, pointed out by our friend @MeereeneseKnot on Twitter:

#HouseOfTheDragon has been shooting today! Looking pretty gruesome on the beach! #HotD#GameOfThronespic.twitter.com/LiQjqbj1EZ

There’s more than four dozen photos of what looks like an intense day of filming by the water. It appears to be the aftermath of a battle at sea, with debris scattered along the shore and prisoners (and a few corpses) staked out in low tide: 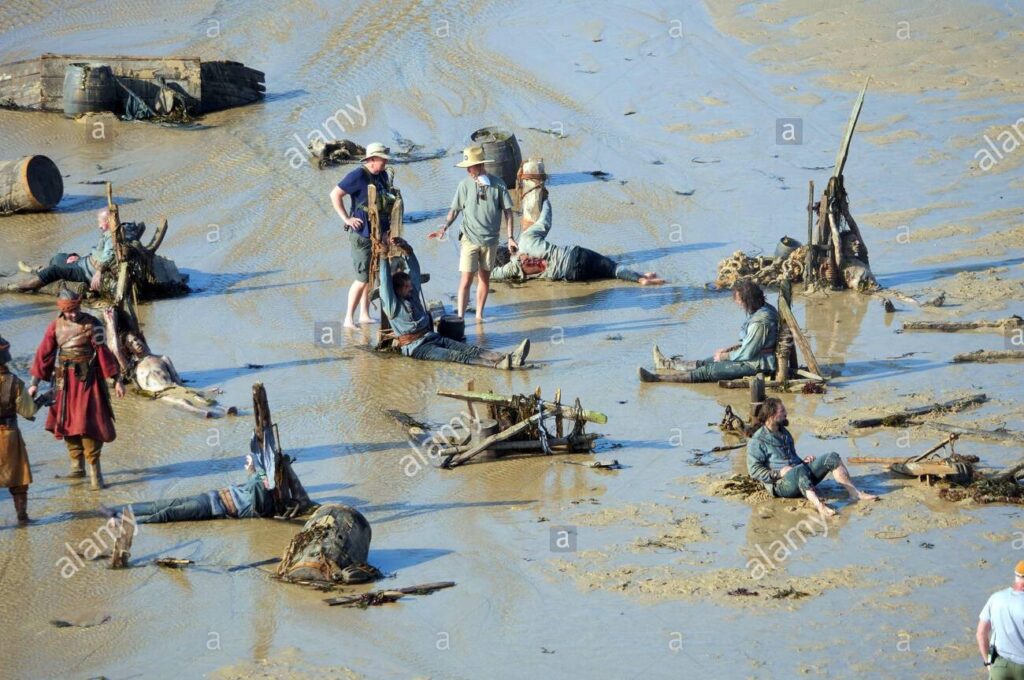 A gruesome fate seems to be in store for these extras. 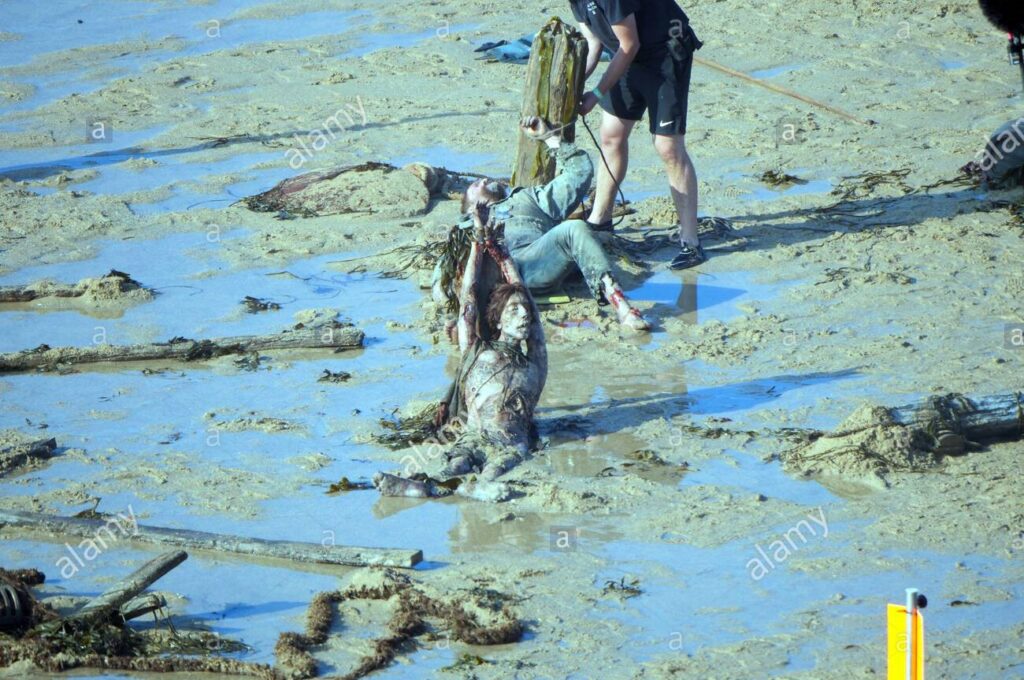 There’s also some definite pirate looting going on and lots of scenes with soldiers in Targaryen armor, so I’m betting that this is filming the Battle of the Gullet and its immediate aftermath.** I won’t spoil anything for you; suffice it to say that it’s a major engagement during the Dance (and if they pull it off it’s going to rival Blackwater as the best GoT-related naval battle ever put to film). 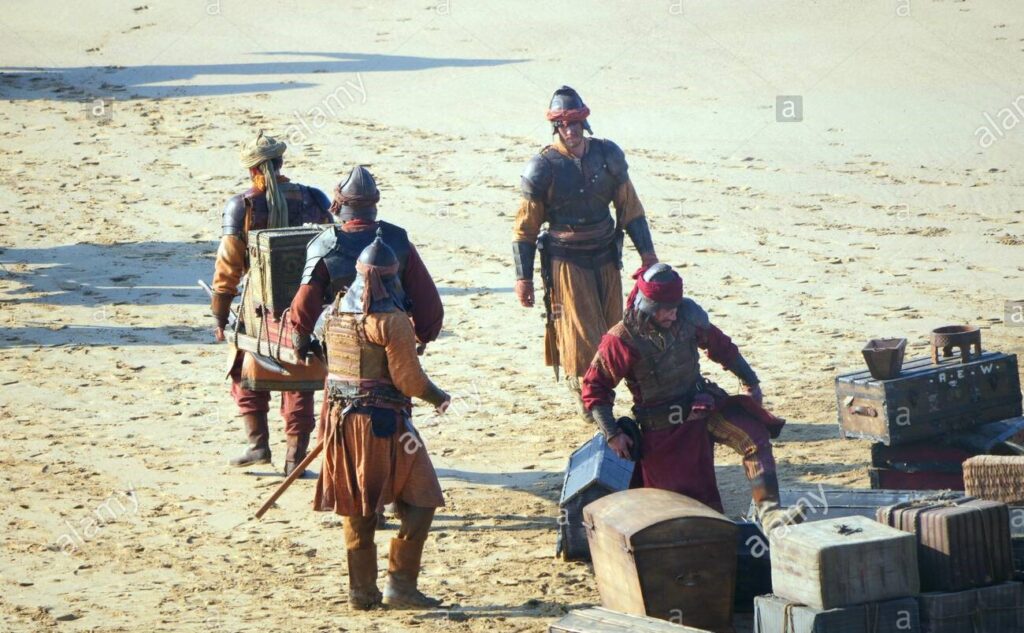 Sailors, probably Tyroshi or Lysene, carrying away loot after the battle. 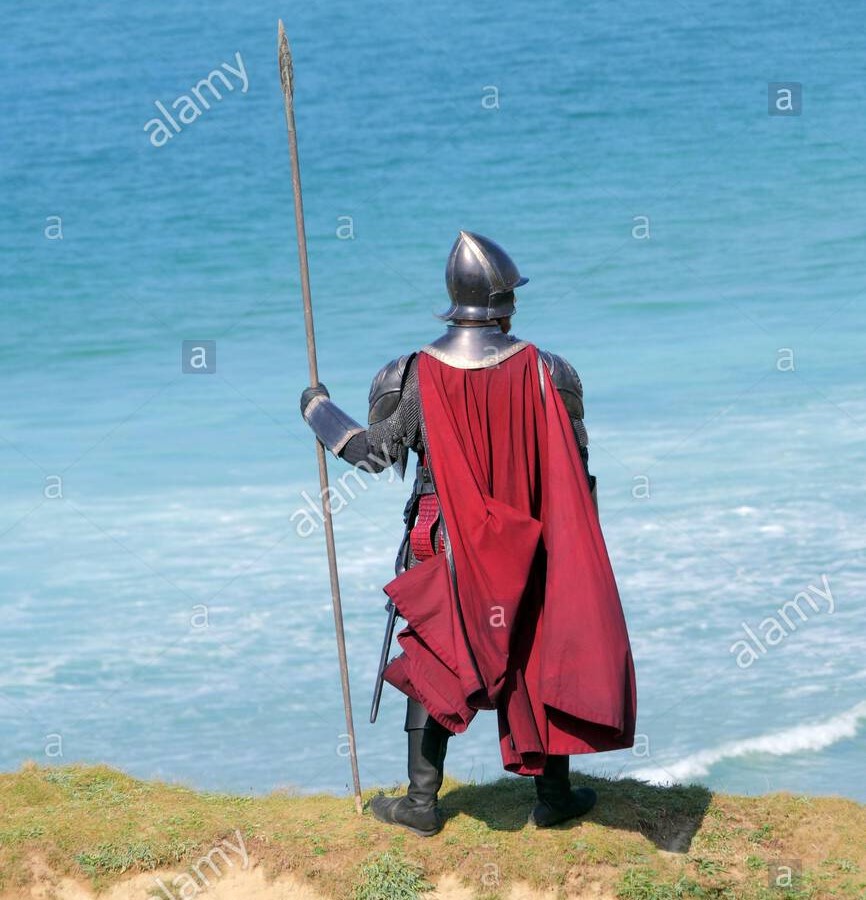 The photos also include several shots of an older woman with Targaryen-blonde hair hiding under a bonnet, and thank the Seven above, it’s our first look at Eve Best as Rhaenys Targaryen! The Queen Who Never Was plays an important role in the Dance of the Dragons and was an undisputed badass, so it’s exciting to see Best on set for the first time. In these photos, she’s seen alongside two younger male actors, both of whom are sporting what appears to be Targaryen red attire and have — wait for it — brown hair. 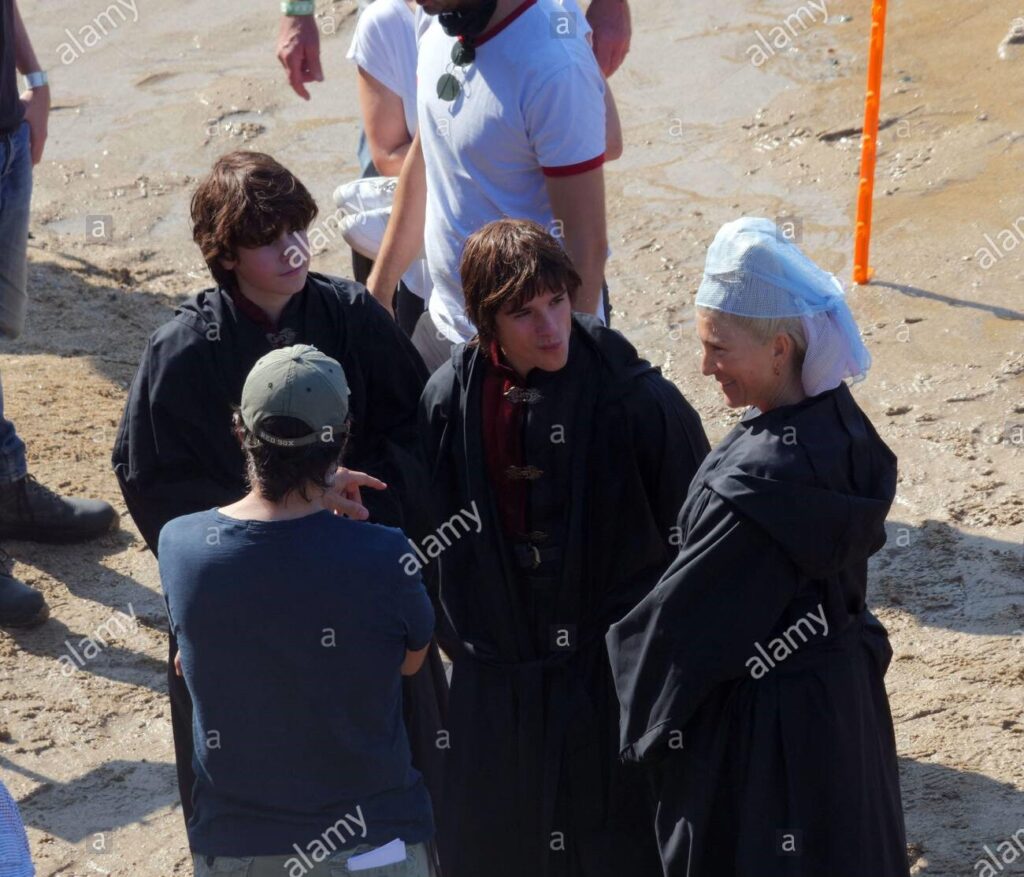 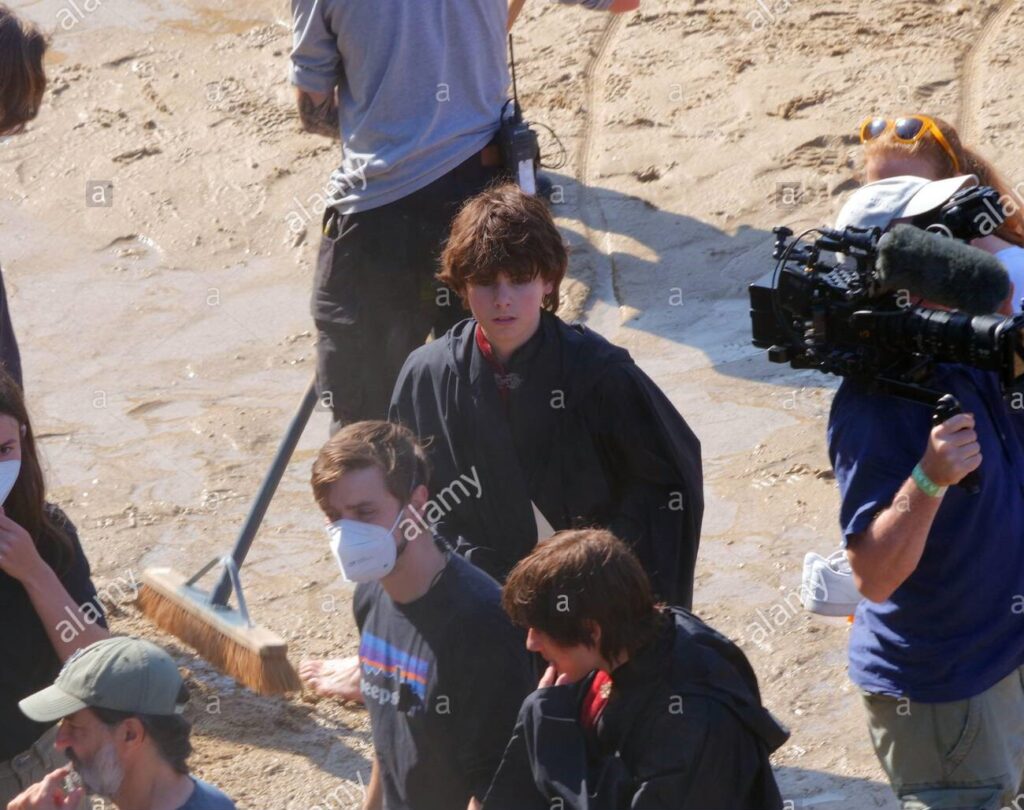 An unidentified actor, likely portraying one of Rhaenrya’s sons with Laenor Velaryon.

If you’re not familiar with the Dance storyline, three of Rhaenrya Targaryen‘s sons with her first husband, Laenor Valeryon, are pretty, ahem, un-Targaryen in appearance — something that plays out to devastating effect in the civil war between her and her half-brother, Aegon II Targaryen. So it looks as though they’ve cast at least two of the three sons so far (my vote is Jaecerys and Lucerys). Hooray for more Velaryons!

**It’s been pointed out that this actually might be the War for the Stepstones, which takes place years before the Dance itself but helped lay the groundwork for the coming conflict. How could I miss Craghas Crabfeeder’s signature move with the prisoners? Sigh.**

Next, we saw a crop of photos from Twitter account Portal House of the Dragon Brasil, featuring young Rhaenyra (Milly Alcock) and — for the first time! — Laenor Velaryon:

The actor playing Laenor hasn’t been announced yet, but given that this actor has the same sigil and pale dreadlocks seen on a different Velaryon (and he’s walking the beach with Rhaenyra) it certainly appears that he’s been cast. And can we take some time to appreciate the costuming game for HotD so far? They’re doing Michele Clapton proud. 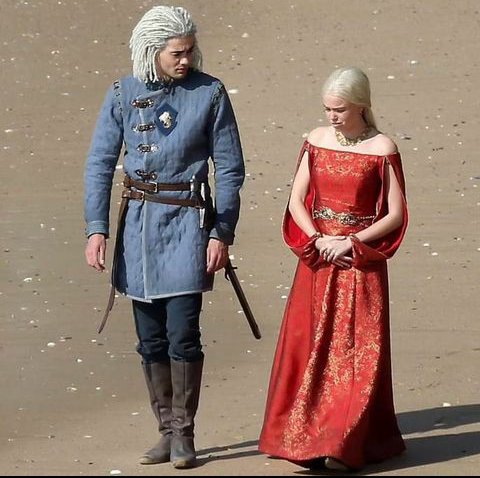 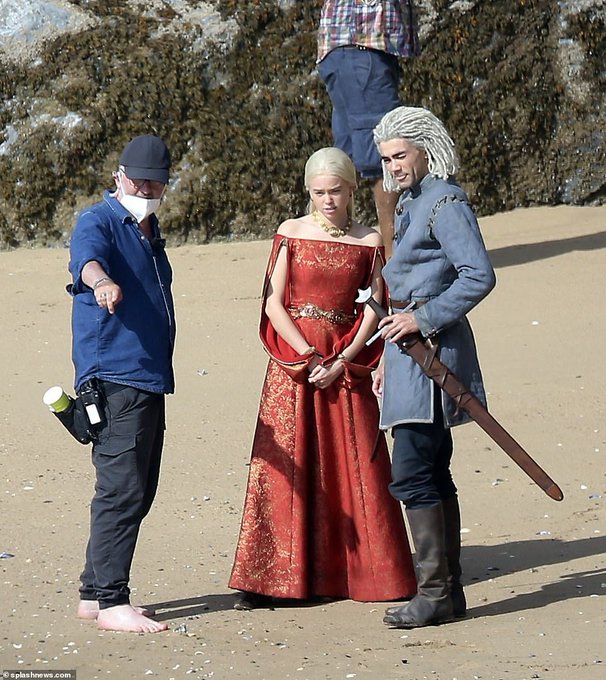 Laenor Velaryon and Alcock. Anyone recognize the barefoot guy?

What do you think of these new photos? Who are some of these characters? Let us know in the comments!