"Winter is Here" for Ommegang this fall with new brew and return of red ale | Watchers on the Wall | A Game of Thrones Community for Breaking News, Casting, and Commentary

The phrase “Winter is Here” may send a chill through Game of Thrones fans’ heart as the Night King stares out from promos and trailers in advance of season 7. However, in HBO’s next partnership with Brewery Ommegang, “Winter is Here” denotes something much more delicious. For those of you who have drained your bottles of Bend the Knee, a new brew is coming from their prolific partnership, debuting this fall.

Winter is Here is an 8.3% ABV Belgian-style double white ale with the Night King’s fearsome visage on the label, openly judging you for not sharing one of the large, 750ml bottles with your friends. Not the friendliest of faces to drink to, but still!

Winter is Here is brewed with pilsner malt, white wheat malt, and soft red wheat flakes, hopped with Saaz hops, and spiced with white pepper, sea salt, coriander and sweet orange peel. Brewery Ommegang’s house yeast is used in primary and secondary fermentation. This double white ale pours a hazy pale straw color with a stark white head. Aromas of banana, clove, and pronounced peppery phenols lead, and the flavor is slightly sweet malt, subtly balanced by hints of sea salt. Despite a full mouthfeel and healthy ABV, it still manages to drink quite lightly. The finish gradually builds in a warming crescendo of peppery spice.

The HBO Ommegang beers have been hard to hunt down for some, so if you missed out on the Fire and Blood red ale, you’ve got a second chance to nab it in a new duo that will be released in late October with one of their gorgeous Game of Thrones glasses. The release says the suggested retail price is $11.99 USD for individual bottles (unclear if Fire and Blood will be sold individually) and $23.99 USD for the gift pack, but prices may vary. Spring for the double pack if you can because the glasses are beautiful and make the beer taste better. For the chosen few, Winter is Here will be on draft in select bars so keep an eye out; from experience, I can say the beer tap handles are pretty cool. 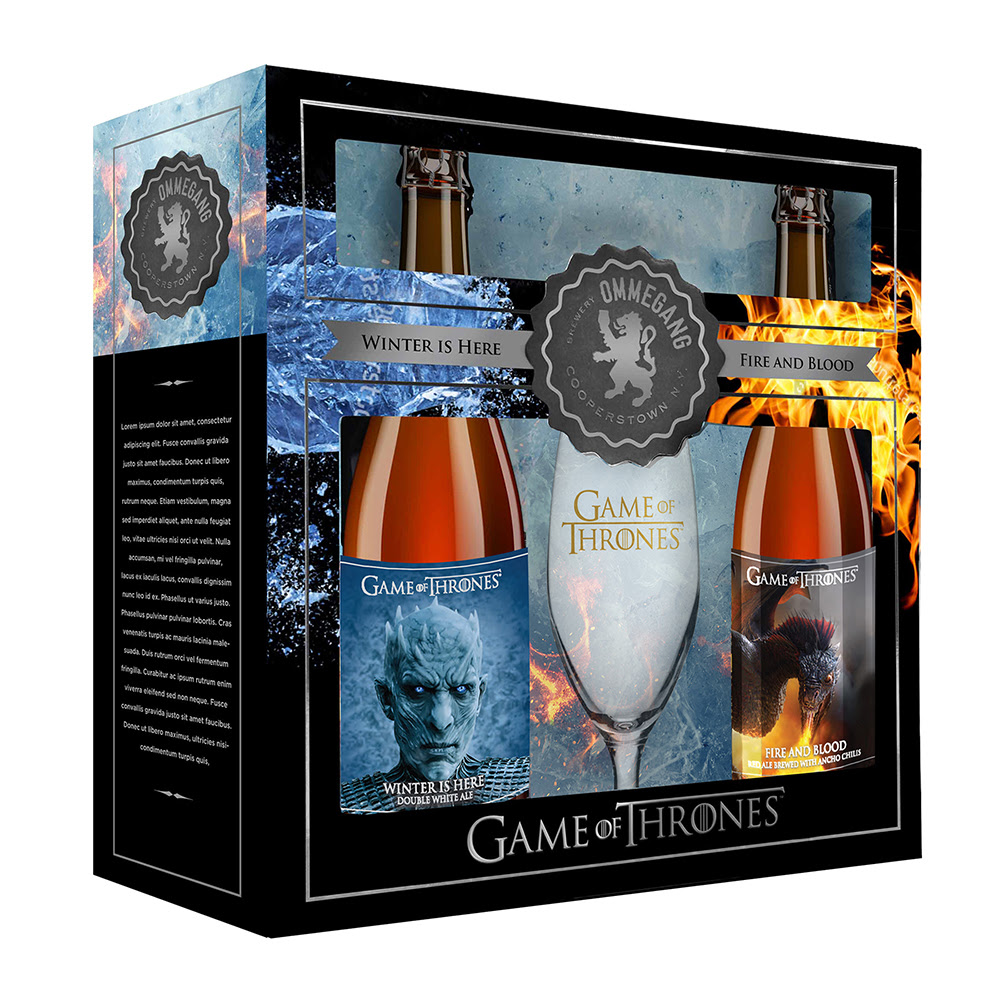 More on Fire and Blood:

Fire and Blood was the third beer in the collaborative series, originally released in spring of 2014. It’s brewed with pilsner, spelt, rye, and other specialty malts, hopped with Styrian Golding and German Tettnang hops, and spiced with ancho chilies for additional complexity. The hue is deep, dark red with a persistent, creamy, off-white head. The aromas of ripe fruit, raisins, slight spice and malt mix nicely with a slight floral, spicy hop character. The flavor of sweet malt gives way to faint dryness and is balanced by spicy rye and hop flavors with underlying raisin and prune notes. The finish offers balanced malt and spicy characteristics from hops and rye. Fire and Blood is 6.8% ABV, and the label art features one of the original three labels, a fiery image of Daenerys Targaryen’s dragon, Drogon.

So what do you think, fellow Ommegang drinkers? Does a double white ale sound like a good brew for fall? Will it pair nicely with our tears as we remember our favorite character who gruesomely died in season 7? If you have been able to experience them, which is your favorite of the HBO Ommegang beers so far?

Please stay tuned for a review, which I hope to have for you in the coming months!

I also wanted to give a shout-out to the Ommegang crew who shared Bend the Knee with guests at the Smithsonian’s National Museum of the American Indian in Washington, DC a month ago. The team was really friendly (it wasn’t just the free samples I was drinking) and it was great to see that the brewery really wants to engage with fans of the show, because they’re fans too! Wins for everyone.