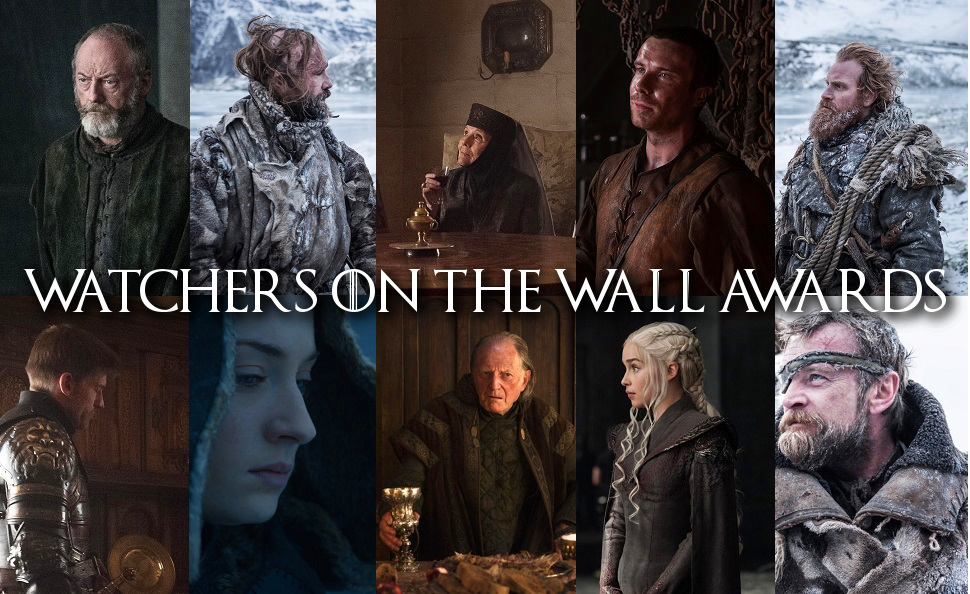 We’re winding down the final round of the Watchers on the Wall Awards, with just one category to go, after today. For our penultimate voting session, we’ll be celebrating the best Game of Thrones has to offer in the way of words.

We divide our Quotes categories into two, for convenience and fun’s sake. In addition to awarding the prize for the All-Around Best Quote of the year, we also present the season’s Funniest Quote with an award of its own. The top choices have been selected by our readers in the preliminary round, narrowing it down to just five in each category.

Now, to reveal our finalists!

The nominees for Funniest Quote of Season 7 are:

“This is Jon Snow. He’s King in the North.” Davos Seaworth

“I want to make babies with her. Think of them… great big monsters. They’d conquer the world.” – Tormund

“I thought you might still be rowing.” Davos Seaworth

The Hound: “How does she look at you? Like she wants to chop you up and eat your liver?” Tormund: “You do know her.”

Unsurprisingly, the flawless timing of Liam Cunningham as Davos and the banter between Tormund (Kristofer Hivju) and the Hound (Rory McCann) dominated this round, with the men joined by Olenna Tyrell’s (Diana Rigg) scathing commentary.

Moving onto the next: our finalists for the All-Around Best Quote of the season are…

“When the snows fall and the white winds blow, the lone wolf dies but the pack survives.” Sansa Stark

“Tell Cersei. I want her to know it was me.” Olenna Tyrell

“Leave one wolf alive, and the sheep are never safe.” Walder Frey/Arya Stark

“Shall we begin?” Daenerys Targaryen

“Death is the enemy- the first enemy and the last. The enemy always wins, but we still need to fight him.” Beric Dondarrion

The ladies dominate in this category, and are joined by velvet-voiced Richard Dormer sharing Beric’s wisdom. Will it be vengeance, a new beginning or a beloved book quote that takes the win here? Let’s find out! It’s time to make your two choices and vote.

Final round rules: Cast your vote for the winners in both Quote Polls. In the finals, fans have one vote to cast in each category- make sure you vote in both polls! At the end of 72 hours (Thursday 1/4/18 at 4PM EST), the quotes in each category with the most votes will be the winner! The results of the poll will be revealed during our live Watchers on the Wall Awards ceremony taking place on January 15th, 2018, at 7PM EST!