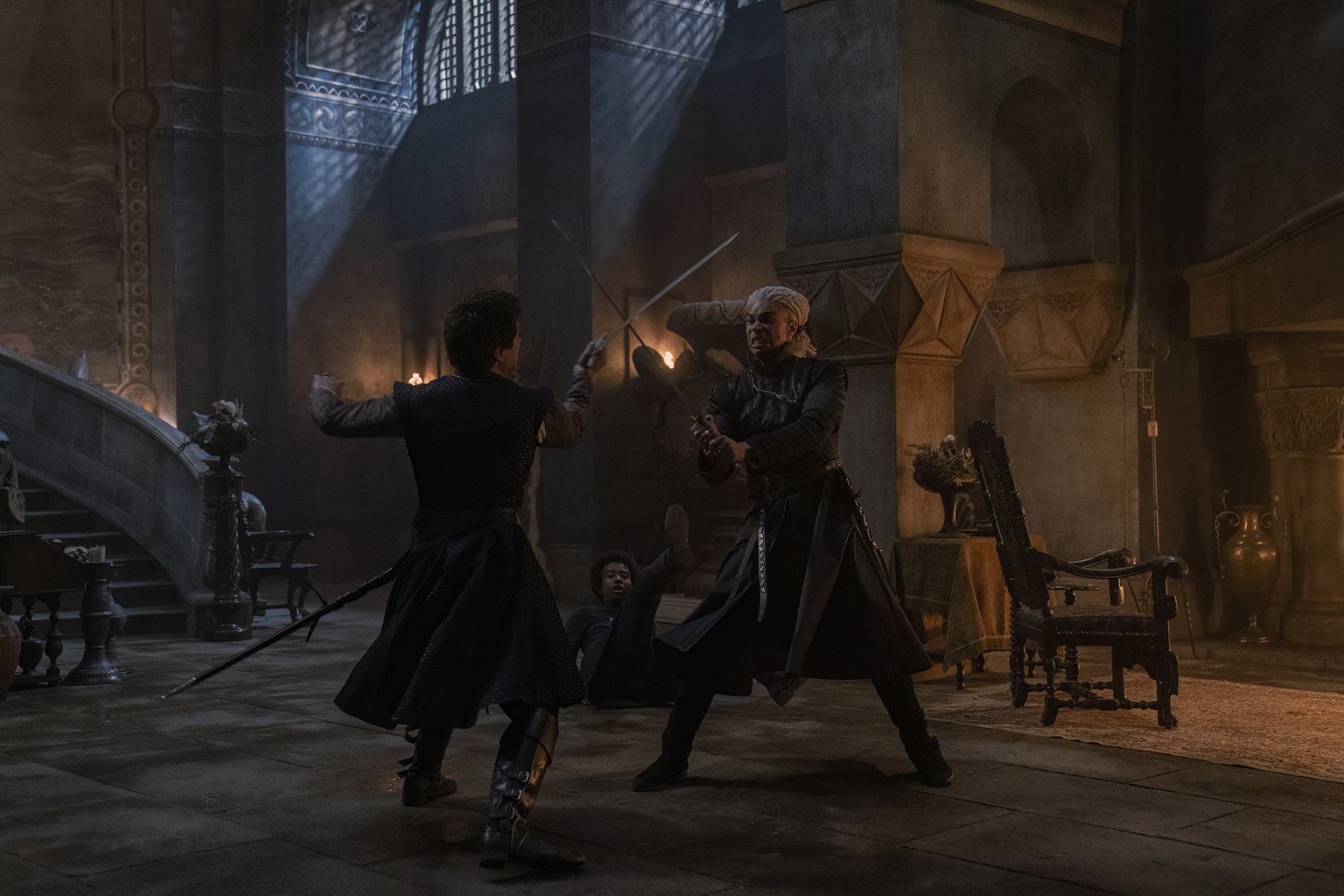 The definition of funeral, compliments of dictionary.com: the ceremonies for a dead person prior to burial or cremation; obsequies.

See also: an ideal event to unpack past family drama and bullshit that typically leads to awkwardness combined with the vast consumption of alcoholic beverages.

And this is probably where they got us. Almost everyone reading this has been to an awkward family funeral. Add in some illegitimate kids and dragons… what in seven hells could possibly go wrong?

My name is Oz of House Oz. I haven’t read any of the books and I don’t like to attend funerals.

And really, who does? While they are meant to be a celebration and/or a remembrance to those who have left us behind, they often evolve into “Altercation City” making the dead person we are there to honor want to roll over in their grave.

Quick recap due to time constraints and real-world issues… you know, like work. And anyway, you know what happened… it was a clusterfuck. 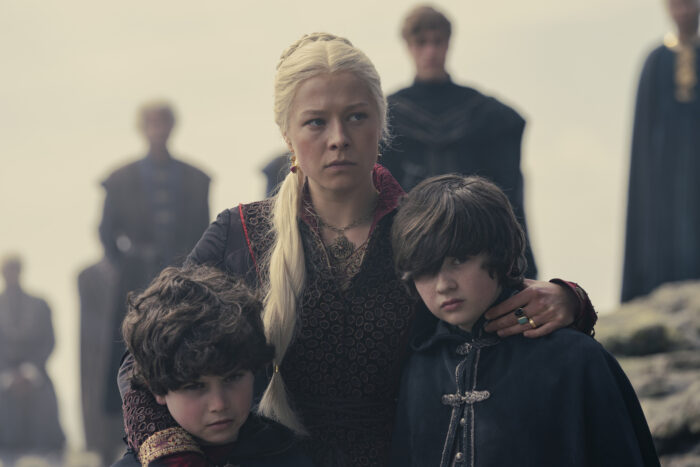 We kick it off with a somber tone as the death of Laena is a pretty big deal in this fictional world where, by the time we meet the characters, they either die or are replaced by aged counterparts that have had 50 kids since the last episode.

Meanwhile, Aegon has a cocktail.

Otto the Plotto is back as the Hand. Congrats to him. And now Alicent has a cohort to lean on (since she can’t really lean on Larys, in a literal sense anyway). 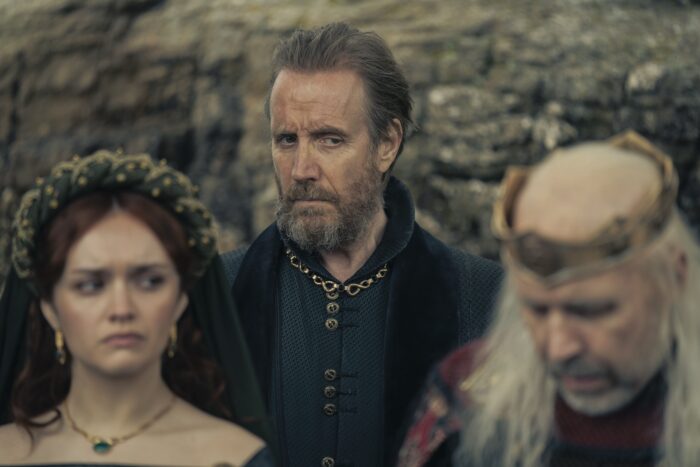 Aegon then takes a shot of tequila.

Helaena plays with a spider and maybe there’s some foreshadowing there? She already hit the nail on the head with the eye for a dragon exchange (which happens later in the ep.). There’s something more up with this kid, not to mention I’m sure she is as excited to marry Aegon as he is because there’s nothing more passionate than brother/sister love. By the way, you people are sick.

In the background, Aegon does a keg stand.

Viserys tries to get Daemon back in the fold to which he replies something to the effect of, “you’ve got to be fucking shitting me” and then calls out Otto with the leech quote because he knows that Otto got mOTTOtives.

Undeterred, Aegon does a body shot of off Vhagar’s back.

Laenor goes for a fully-clothed swim and daddy ain’t having that “wallowing in your own pity sissy crap” and sends Laenor-lover to retrieve him.

Corlys and Rhaenys discuss the loss of their daughter and ambition and the actress that plays Rhaenys is exceptional.  She thinks that the true-born Velaryon grandkids should get the farm when they die because the dark-haired shits aren’t really their blood.  Corly says, “nah” and that people remember the name, not the blood.  The Targs did NOT get the memo. 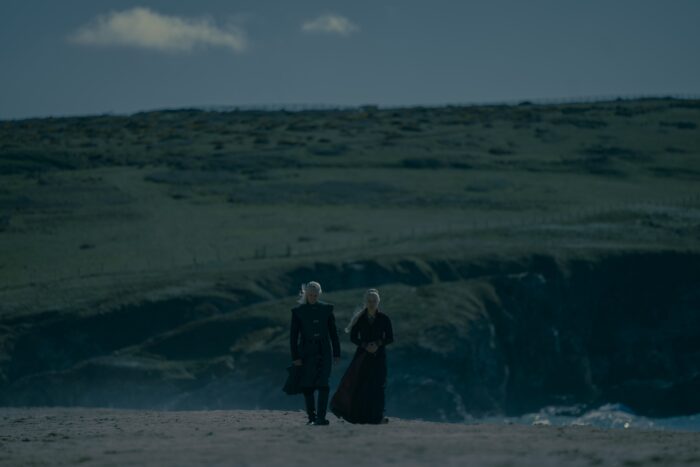 And then from there, I can’t see shit!!

Two blonde-headed people take a stroll on the beach and then get naked. Another blonde person runs like he is going to bust them in the act, but no… he’s actually going dragonjacking.

When I realize the lovemakers are Daemon and Rhaenyra (which was an uncomfortable yet beautifully-shot scene… at least what I could see of it), all that is going through my sick mind is…

I see my therapist later today.

Not to be outdone, Atreyu hangs on for dear life to Falkor and I can’t handle revisiting these traumatic experiences from my childhood anymore.

Meanwhile, Aegon switches over to beer. 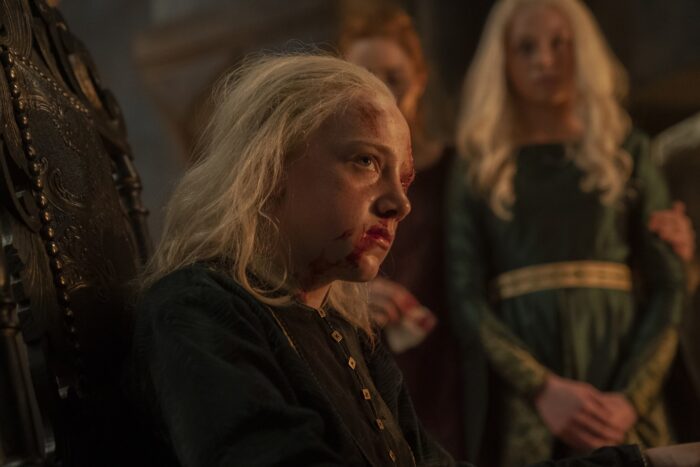 With his newfound confidence, Aemond is met by the other kids who are not pleased with the dragonnapping of Vhagar.  It’s all fun and games until we start hitting girls and picking up rocks and grabbing a dagger because before you know it, kids are crying and there’s an eye lying on the floor.

Enter the parents and woahhh, I’ve seen this movie before. “Your kid hit my kid first and you all are a bunch of bastards and cousin-fuckers and I’m calling the cops.” The difference in Westeros is that you literally do get an eye for an eye, or at least you try.  Damn Alicent. 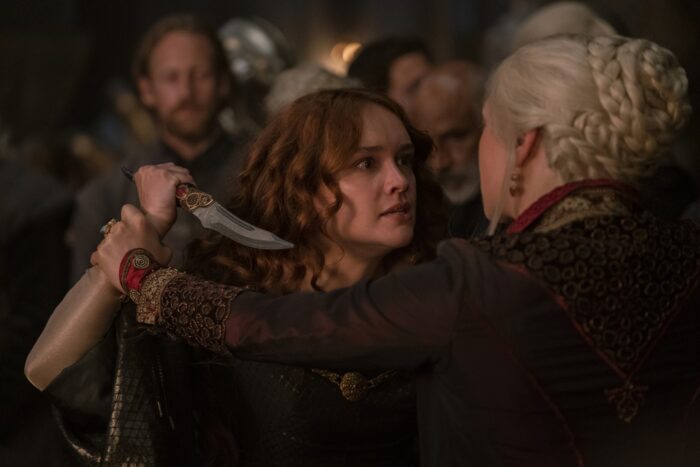 Aemond blames Aegon for the bastard rumor who, by the way, just opened his fourth beer.

Otto appropriately seems quite impressed that Alicent tried to stab a child in the eye and Laenor admits to Rhaenyra that he hasn’t been a very good father.  Little does he know that she has other plans cooking.

The family drama is clearly putting Viserys in an early grave as Littleflower Larys once again offers up his services to Alicent. This time, she seems to accept. 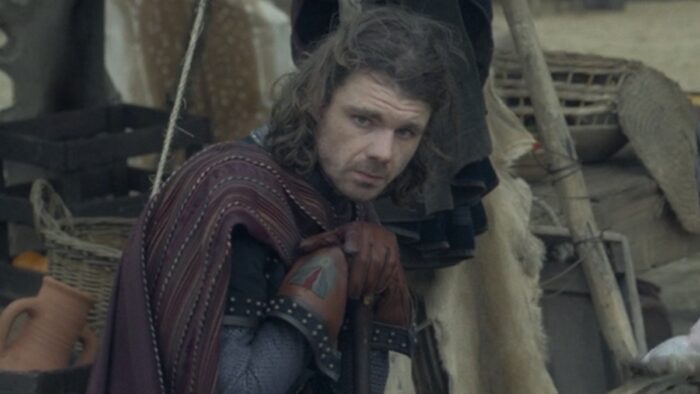 Rhaenyra proposes a marriage to Daemon which at this point is probably a good idea, yet still gross. Daemon goes to payoff Laenor-lover Qarl to take care of the obvious problem (damn those existing husbands). Qarl seems to accept but the whole time I’m thinking, “what makes Daemon think Qarl is going to kill the person that seems to be the love of his life?”

Laenor then gets grilled to perfection much to the chagrin of Corlys and Rhaenys.

A glorious, blood-exchanging, strategic, incestuous wedding ensues and now the stage is set for what will likely be a fantastic conclusion to the season. 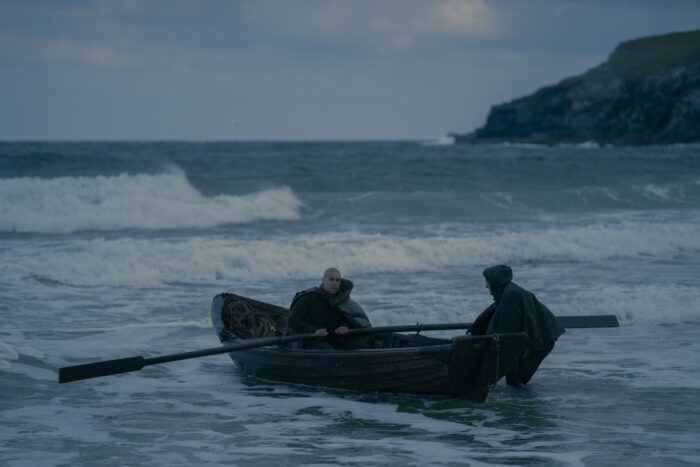 And to end it all, Laenor pulls a Tupac and shows up with a shaved head to spend the rest of his days on a tropical isle with Ser Qarl. Is this it for him or will he show back up before the end?

Aegon orders a Baileys on the rocks for his nightcap and FINALLY passes out.

Initial Thoughts: While the show has had a few snafus with dark scenes and the sometimes quite confusing fast-forwarding, what it has excelled at is building intensity. The show-runners seem to pull this off continuously by lulling us to sleep at times while we know we don’t need to close an eye because… something is coming.

The funeral laid the groundwork for this in Episode 7. The powder for the keg was there the whole time. The question was, what was going to light it?

The stage is now set for what should be epic final episodes. The Daemon/Rhaenyra wedding thickens the plot. But most importantly, Aemond has the biggest f’ing dragon.  Fire most surely awaits.

See you all next week for another fun-filled recap of “Oz has stupid thoughts.”