Though filming in Itálica was supposed commence last week, all evidence—or rather, the lack of any evidence of anything going on there—pointed to the contrary. Thankfully, that changed today: after weeks of preparations on the amphitheater by the local crew, the Northern Ireland-based crew has finally arrived. And they’re not the only ones!

First of all, GOTlikeLocations‘s photos show not only a warning against using drones to peep on the production (with a prohibitively expensive fine), but also the familiar G&H trucks (the G&H company provides vehicles to the Northern Irish film industry.)

So they (finally) arrived this morning. Also drone flights rather expensive in (parts of) Santiponce these days. pic.twitter.com/YyCDNfuZuX

The production crew’s arrival clears up the apparently strange duration for this shoot. The initial reported schedule confused us, as there were no signs that an elaborate sequence of any sort would be shot in or around the amphitheater, even though they were supposed to film there for four weeks. Since then, it’s become increasingly obvious that the original timeline included at least part of the pre-production phase. The exact duration of the shoot is still up in the air, but now we know it won’t be an entire month.

Finally, there is the “unexpected cast member” we teased. In a rather unlikely coincidence, Maisie Williams is in Seville. Yesterday, her boyfriend shared a selfie via Instagram Stories, supposedly just on vacation, and Los Siete Reinos picked it up: 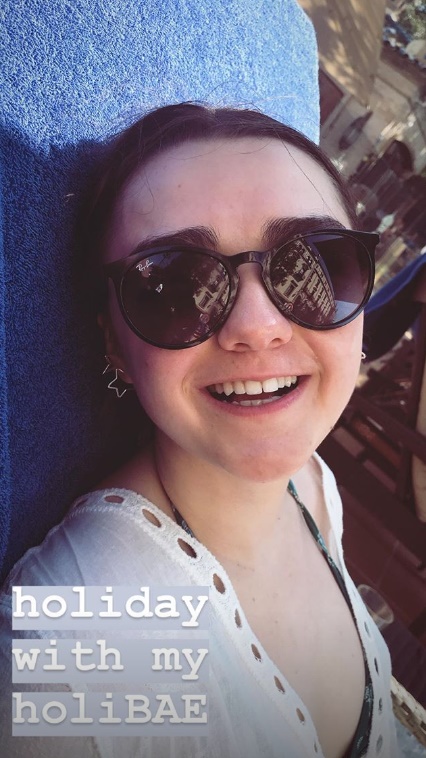 The reflection on her sunglasses is what gave her location away, of all things: it appears to be the Alfonso XIII Hotel in Seville, which is exactly where the cast stayed last year as they filmed in Itálica. She could just be there vacationing with her boyfriend, of course, but it would be one hell of a coincidence for Maisie to show up in Seville, minutes away from Itálica and staying in the same place the cast used last time. I think not!

If this is what it looks like, Arya’s presence in the Dragonpit is a bit of a surprise. I’m sure speculation will be lively below, but personally I’ve got nothing. I can imagine many reasons—or rather, targets—for Arya to infiltrate the Red Keep, but the Dragonpit not so much, unless Cersei and the Mountain have become fond of the Targaryen ruin.