Kristian Nairn not to appear in Game of Thrones season 5, Toome on lockdown for filming, and more | Watchers on the Wall | A Game of Thrones Community for Breaking News, Casting, and Commentary 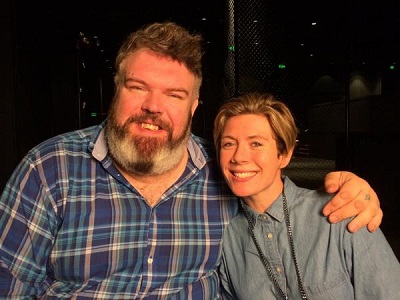 Kristian Nairn is currently touring his “Rave of Thrones” DJ set. While in Australia yesterday, he spoke to Monique Schafter of ABC, and disclosed some new information about season 5.

Monique Schafter: Fans around the world are hungry for the next series of Game of Thrones, but they’ll have to be patient.Kristian Nairn: We’re not actually in Season Five, by the way. We have a season off. We have a year’s hiatus. Monique Schafter: Really?Kristian Nairn: Solely because, I imagine, our storyline is up to the end of the books. … So I get a year off now to do Rave of Thrones and gallivant all over the world.

Spoiler discussion after the jump.

The town of Toome remains on lockdown, as Game of Thrones continues filming there today. Some readers speculated that a certain effects-heavy scene may be included if green screens were to show up on the riverbanks. Judging by the reflections in the water in the following image, they may get their wish.

Game Of Thrones alert. Bridge at Toome screened off for filming! Security man on guard. Time for a boat I think…. pic.twitter.com/a5f8AkI1bC

After previous sightings of Peter Dinklage and Iain Glen together in a blue boat at Toome, many have started to speculate that they may be filming the show’s adaptation of the Sorrows sequence from A Dance with Dragons. This recent (apparent) green screen sighting would seem to back up this speculation. Obviously, nothing is confirmed at this point, but it is worth keeping in mind.

Extras casting continues today in Osuna, Seville. ABC.es reports that despite the hot weather, everything is proceeding as planned and without incident. However, as the quota of men has almost been fulfilled, the production is seeking more female applicants aged between 30 and 60 years old.

Cian: Kristian’s statements are interesting, and surprising if true. Of course, “we” might just mean himself and Ellie Kendrick, with Bran possibly having some (flashback?) scenes alone with the Three-Eyed Raven this season.