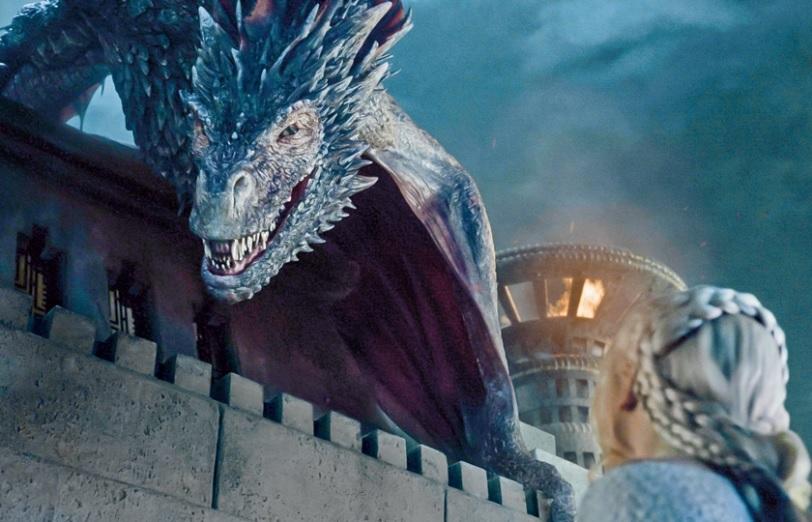 Dany’s little dragon, Drogon, has returned this year, only he’s grown a bit. In fact, he’s grown so much that, according to this new interview with TVInsider.com, Game of Thrones is now using two new methods to create the black dragon.

Visual effects supervisor Joe Bauer speaks with TVInsider about the creation of Drogon in season 5, offering a peek at how the biggest of the dragons will be depicted this year.

“Drogon is twice the size he was last year. He’s about 40 feet long and 20 percent bigger than the other two dragons,” Bauer says. “He’s also the alpha, so his way goes. He’s still affectionate with Dany, but he’s got his own mind and needs her less, just like any child growing up.”

To create the new effect, Bauer says they had “the world’s one and only fire-breathing crane” which David Benioff claims looks like “some kind of weapon from Transformers.”

“Standing 50 feet away from the dragon fire, you could get a nice tan,” says D.B. Weiss.

After the segments that used the crane were put together and edited, digital artists then added in the fine details of Drogon himself.

According to TVInsider, Drogon is modeled after “Komodo dragons, iguanas, horned lizards, and crocodiles, and “his movements were derived from eagles and bats, and his takeoff from pelicans.”

The visual effects team also used a SimulCam system, saving the appearance of the dragon into the camera so “everyone looking at the monitor could see exactly where he would be, and the scene could be framed properly,” according to visual effects producer Steve Kullback.

One last tidbit from the article- according to the Joe Bauer, “Drogon gets to perform more this year than ever and have more complex interactions with Dany.”

Stop by TVInsider for the complete details on the new visual effects of Game of Thrones and quotes from Emilia Clarke.