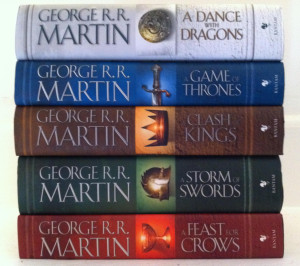 Axey at ya again, bottom-supporters, ready to do the sidewalk shuffle here on the Wall for your reading pleasures!

With the daily trickle of news coming in fits and starts, I thought it’d be a fine time to put up another opinion piece. Though I don’t really want my opinion—I’d rather have yours.

We all know change to ASoIaF is inevitable when translated to a television format. And I asked this question over at WiC a few years ago (and received a varied number of answers) so I thought we’d reshuffle this deck and hit the topic once more.

(And yes, this would be perfectly suited for our forums, but some people out there still don’t realize we have forums! This is your last notification!)

So here’s the task–give me two things: Your favorite story alteration, and your least favorite.

We can discuss things from there. I have an admittedly limited but working knowledge of why television shows make various changes, having worked in the industry (albeit briefly and in an ultimately failed capacity), so if you have questions as to the “why” I may be able to answer them.

Special rule: To give one, you have to give the other. I don’t want senseless nerd rage over a hundred perceived omissions, and I don’t want some myopic love fest happening either. Nothing is above a little criticism. Balance. “Only death pays for life.”

Favorite change: Brienne meets the Hound. I thought that was bloody outstanding; not just the fight (which may have been the most brutal, fantastic hand-to-hand fight ever on television) but the way it toyed with Arya’s seemingly brief hope, and how Brienne couldn’t dig herself out of the “Lannister gold” hole. McCann, Christie, Williams, Portman… all excellent as well. The scene played to the actors’ strengths, which is what good writing does best.

Least favorite change: the omission of “Weasel Soup” from Arya’s escape from Harrenhal. Yep, it’s been a few years, and I’m still slightly bitter I never got to see it. When I read it, years ago, I imagined it so vividly, and couldn’t wait for it to be brought to life. Alas! I understand that it was probably a cost issue, as well as a “too many moving pieces” scheduling issue, and Arya isn’t even my favorite character, but… I still on occasion shed a nice fat nerd tear for its loss.

How about you? Speak here and be heard!