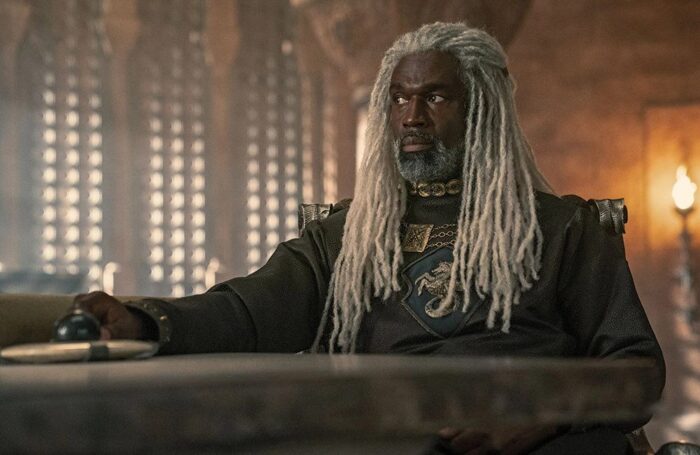 Steve Toussaint recently spoke with both Tony Teflon and Jason Concepcion about his character, Corlys Velaryon; the racist backlash against his casting, and how he didn’t want to wear a helmet during his battle scenes.

1:48 Toussaint introduces his character, Corlys Velaryon, explaining how he became the richest man in Westeros and why his wife, Rhaenys, is known as “The Queen Who Never Was.”

3:03 “[O]ne of the things that has kept Corlys going is this resentment that Viserys is king, because Corlys believes that Viserys is a nice man but not the right king. His wife should be queen. That’s kind of who he is in a nutshell.”

4:11 Toussaint talks about the scale of the production for House of the Dragon: “You walk in and … the level of craftsmanship and detail for the sets, the costumes, the weaponry. It’s extraordinary. And the sets they have for my house in Driftmark, the Hall of the Nine, it’s beautiful … it’s really impressive.

4:54 Toussaint relates how he asked Ryan Condal for some backstory for all of Corlys’ artifacts in Driftmark. “[H]e came back with this dossier of the history of each of those objects that you see in there. So it’s never mentioned. No one actually says anything. But I know … there’s, like, one scene, [of] myself and Rhaenys in the hall and I’m looking at this huge globe and I’m thinking about my adventure, about how I got that.”

5:50 Interviewer, Tony Teflon, asks Toussaint what he loves more, reading a good script or writing one himself. “You know, that’s a kind of complicated question, Tony, man. Ideally, it’s getting a good script and working on it and just acting because, for me, I don’t think of myself as a natural writer. So, writing is a tough process for me … it’s like getting blood from a stone … But then, having said that, when you do write it, when it is finished and you’re on the set and you’re like, ‘Oh, my goodness all these people are here because of the thing that I did,’ that’s an indescribable feeling of joy, man.”

6:52 “We were given copies of the [Fire and Blood at] some point during the filming, and I was going to read it, and then I thought, ‘No. What you’re going to see is what I got in the script.’ I don’t need to know all that other stuff … so, I’m portraying what our writers wrote, the man that they created, as opposed to what George Martin might have had in mind in his book, and, hey, listen, Ryan Condal knows everything about Westeros and Game of Thrones lore. So, it’s not going to be that different, but, yeah, I decided that the script was my blueprint.

8:08 Toussaint addresses the backlash to his casting as Corlys Velaryon. “You know what, Tony, I had no idea. I think, you know, what happens sometimes, is if you live and exist in a particular social bubble, you can forget sometimes [and] think the world thinks like you do. So, where I live, my friends are from everywhere. I have friends of Asian extraction, Chinese extraction, I have Caucasian friends, whatever. We don’t think about those things. It’s not that we don’t see color. Of course, we see color, but it’s not relevant. So, when this thing happened, that was the furthest thing from my mind. And the very first thing that happened, literally, as it was announced … a director that I worked with in Austrailia put something on social media saying, ‘Hey, Steve Toussaint’s great.’ Somebody responded by saying, ‘Steve Toussaint is an n-word.’ That was the first thing I saw. I was like, ‘This is the world that we live in?’ And then, of course, there were pictures of me and [drawings] of Corlys and [people] saying, ‘Really, should it be this guy?’ … and that’s, in fact, how you and I got in touch, really, because you were a guy that was defending. So, it was a complete and utter shock to me, and that’s not that racism is a shock because … listen, I’m a black man. I have to deal with this a lot. As I said to somebody else today, I’m not an expert in racial abuse and discrimination. I’m just very experienced at receiving it. So, a lot of my friends, we just go, ‘Oh man, that’s just how it is.’

9:35 Teflon talks about being a black person in the Game of Thrones fandom. “I want to say, thank you because every time we go to a Con, people like us, we have no one to dress up as. [Toussaint laughs] And now we finally have someone.”

20:00 Toussaint talks about how he embodied the character of Corlys Velaryon. “It was actually kind interesting. I had a face-to-face meeting with the two showrunners, with Miguel [Sapochnik] and Ryan [Condal] and, actually, at that meeting, all we talked about was fathers … and that was the key to this character because, despite the fact that, of course, he is a very wealthy man, he’s an adventurer and explorer and a warrior, he is concerned with legacy, and he is concerned very much with sorting out the future for his children and for their children, and so forth. So, actually, that was the way to get into him.

21:01 Toussaint talks about his casting. “I’m very glad that between the discussions between Ryan and Miguel and Mr. Martin they decided that they wanted to put some color in. For the other show, for Game of Thrones, for example, there were several parts that some of my friends were playing, actually. But I think they were pirates and robbers and slaves. So, for them to then decide that … the richest man … [should be] be a man of color, I thought it was a very brave thing. Now, of course, when my casting was announced, there were some people who were not quite so keen on people who look like me playing this part, and there was some of that stuff, which was a little bit annoying, because … it’s a big enough task as it is without having to deal with that stuff. But, hey, listen, I’m not an expert on racism but I’m very experienced in receiving it. So, I kind of thought, ‘Well haters gonna hate. I’m just gonna get on and do my thing.”

22:12 Toussaint briefs us on Corlys’ family history, his skill as a sailor (“I was going to say ‘seaman’ but for some reason it still makes me laugh. I’m trying to mature”), and how Corlys feels about his wife, Rhaenys, getting passed over for the crown. “And whereas Rhaenys very quickly decided, ‘Ok, that’s just the way life is,’ Corlys is still like, “No, it should have been you.’ … [T]he motor for most of the season for Corlys is, ‘How do I get us back to where we should be? Because this is ridiculous. Because Viserys is a lovely man, but not necessarily a good king.’”

24:56 Toussaint talks about Corlys and Rhaenys’ relationship. “So, one of the first things … that we would discuss were our interpersonal relationships, and one of the first questions … we asked both Ryan and Miguel was, ‘Is this marriage for love or was this some sort of merger?’ And they were both very clear that it was a love relationship, and I like that idea … it’s one of the relationships that … I really rooted [for] because there was no politics involved in their relationship. It was just that they loved each other … even though they have their rifts. There is a moment … when he leaves the family home. Things get too much and he decides, ‘I’m going back to the sea because I understand the sea.’ And then when he comes home, he has to explain, ‘Well, I thought I’d let you down.’ And she’s like, ‘Well, no, when we are facing threats, drama, we’re better together.’ And he’s like, Yeah, absolutely. You’re right.’ So, I think it’s probably the healthiest of the relationships in the show, I think.”

27:16 Interviewer, Jason Concepcion, asks, “What is it about power that interests Corlys in this story?” Toussaint: “I think he would say it’s about the fact that we, as a family, were slighted. At one point in the story, that’s what we would say … but I think as the story goes on he is forced to admit to himself, ‘No, it’s actually about me,’ because [Rhaenys] has let it go … but he still bangs on about [it].”

28:01 Concepcion asks what kind of father Corlys is. Toussaints groans, then laughs. “That’s a hard one, because I want to say, ‘He’s great!’ But he’s not. He’s not good … he is one of these fathers who is like, ‘I know what’s best for you, shut up and listen to what I say.’ Do you know what I mean? And we see that mid-way through the season how he is with his son, particularly. He’s a little hard on his son. I think he loves his children, but he’s basically [saying], ‘You’re gonna do this thing because it’s good for the family, and I don’t care about who you are, and what you think.’”

28:58 Toussaint discusses how he and Corlys both prioritize their romantic partners, “That idea that all of this is worth nothing without my significant other … I understand how precious it is to be able to be yourself to at least one person in the world.”

29:55 Toussaint talks about how he was inspired to become an actor when he learned that Gary Oldman came from his neighborhood in London. “And I was like, ‘Oh my God, what? People from here can be actors?’ And then I started to pursue it.”

32:57 Concepcion asks Toussaint if he had to fight one of the characters from House of the Dragon, who would he take on? Toussaint: “There’s a list. Okay, easy to say who I would avoid. So, I’d probably avoid Paddy, because Paddy’s actually a very gifted boxer … Rhys is lovely, but I just feel like he’s a bit devious, you know … The rest are fair game. The rest I’d give them a slap. It’d be fine. Don’t tell Matt I said that.”

33:34 Concepcion asks if Toussaint enjoys the physical aspects of the role, the fight scenes, the armor etc. Toussaint: “You know what? I enjoy it as an idea. Do you know what I man? So, what happens is, you get the scripts and you go, ‘Oh my God, there’s a battle. That’s gonna be great! … And there was a huge battle of wills between myself and Ryan and Miguel, because there is a battle scene and I didn’t want to wear the helmet … and they were like, ‘No, he’s a good fighter He would wear a helmet because he’d get his head bashed in.’ … So, what happens is you then spend weeks training with stunt guys going through the choreography of this thing, because my character, he doesn’t have a sword. He has this huge, heavy staff thing that has a double-edged blade on one side and a huge heavy ball on the other … and so we practiced that … but of course, then you get onto this set and then suddenly there’s all this smoke everywhere and they’re coming at you and suddenly, rather than looking like Sean Connery, you’re just going, ‘Ah! Ah! Ah!’ And then you sort of go, ‘Cut that together and make me look sexy.’”