Win a trip to the Season 8 premiere of 'Game of Thrones' with Emilia Clarke! | Watchers on the Wall | A Game of Thrones Community for Breaking News, Casting, and Commentary 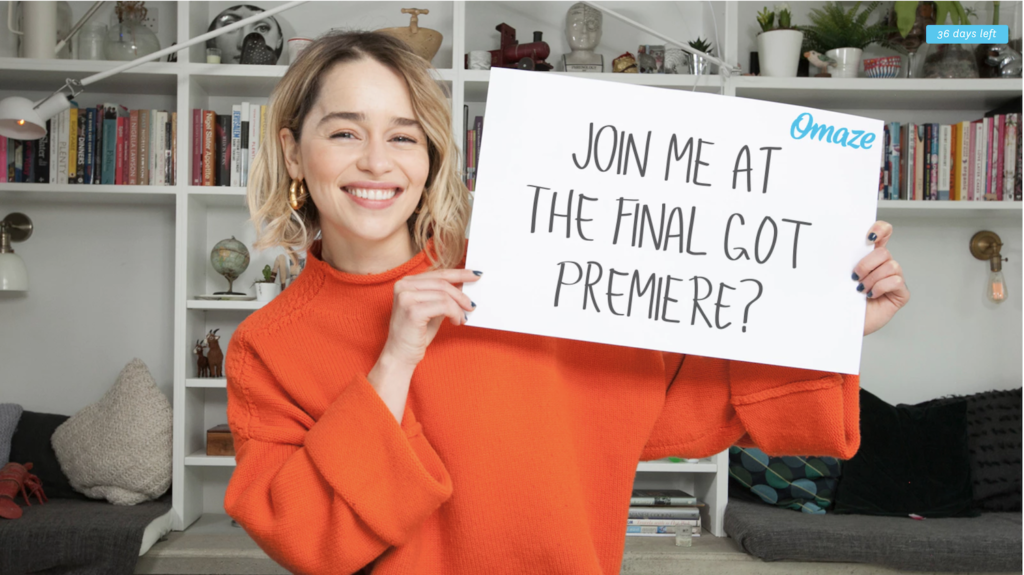 Win a chance to attend the Season 8 premiere with this cheerful beauty!

Not that we’re clamoring for the end of Game of Thrones per se, but the chance to hang out with Emilia Clarke at the Season 8 red-carpet premiere? That’s something we can all hope for.

Online fundraising platform Omaze, which raffles off “once-in-a-lifetime experiences and exclusive merchandise” in support of critical causes, is offering the chance to one lucky winner and a friend to attend the Season 8 premiere in New York City as Clarke’s “Hand of the Queen” VIP guests. Omaze has previously offered prizes including a tour of the Thrones set, a chance to be Nikolaj Coster-Waldau‘s VIP (also to the Season 8 premiere) and meeting the cast.

Clarke announced the contest in a charming YouTube video in which she details what being her guest means — in addition to flights and hotel accommodations, the winners get to walk the red carpet with her and share a toast at the official HBO after-party, which she promises will be “lit AF.”

She also said that the final season feels sentimental, “like a graduation,” and proceeded to award the Thrones cast with “yearbook-style superlatives,” including:

Best Reaction to Finding Out Their Character Was Being Killed Off: Jason Momoa (the reaction to his death took “days” to recover from)

Most Likely to be a Stark in the Streets and a Wildling in the Sheets: Alfie Allen (yes, really!)

Best Eyebrows: Herself (“Is that even a question?”)

Biggest Prankster: David Benioff and Dan Weiss (who apparently wrote a fake storyline for Kit in which his whole face got scarred “because they knew it would really mess him up”)

Most Likely to Have Insisted on Doing A Nude Scene: Kit Harington (“The abs!”)

Most Likely to Cry At the Final Game of Thrones Premiere: “All of us!”

Clarke’s charity is Charities Aid Foundation of America, which helps young adults recover from the impact of major medical trauma. Details and rules for entry are available here. Best of luck!