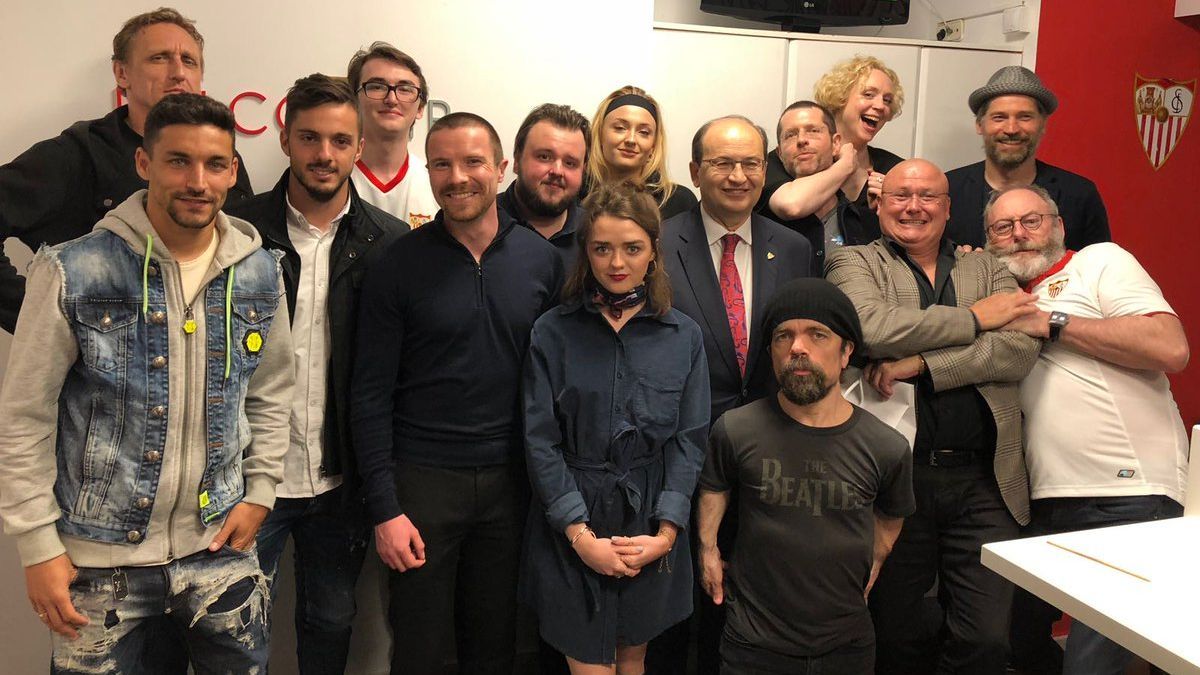 The big Game of Thrones news this week was the arrival in Seville of most of the cast for the Dragonpit scenes, though they may have been there for other reasons as well. There are a few new arrivals, including one we have been expecting for a while. This focus in Spain doesn’t mean the home front has been abandoned, however: season eight is still being filmed in Belfast … and major things are happening. Beware: spoilers below!

Before moving on to Éire, let’s catch up with Spain, where the cast hasn’t shied away from the cameras. Just as they did before in 2016, the entire cast and the showrunners attended a football (“soccer”) match in Seville. The home team won, for those who care.

Moreover, a few actors we didn’t mention in our first report have been sighted in Seville. To review, or for those who missed it, a few days ago we saw Peter Dinklage, Nikolaj Coster Waldau (already gone!), Sophie Turner, Maisie Williams, Isaac Hempstead Wright, Liam Cunningham, Joe Dempsie, Gwendoline Christie, Conleth Hill, the unexpected Faceless Men Tom Wlaschiha and Faye Marsay, and the Night King himself Vladimir Furdik. Since then, a few other cast members have been recognized by multiple sources: Iain Glen; Lino Facioli, Lord of the Vale; and the Mad Queen, Lena Headey:

Moving on: yesterday our sources confirmed shooting is still going on in the Paint Hall sets, and today A Red Priestess shows there have been major developments outside too, at the King’s Landing set. Compare the wall as it looked recently to how it looks now:

The city gate has been oblitared and the towers that once protected it have fallen. Though the breach of King’s Landing is a spoiler, it is not unexpected for those who followed the first months of this set’s construction. The gate was constructed first as if to appear breached, and then covered with an intact wall and an actual gate.

Though the gate was built modularly, the towers required some additional work, as they were always built to look intact. Now there is nothing left but rubble from the wooden platforms where we speculated the scorpions would be placed (either on set or in post-production), and the towers themselves have suffered heavy damage too. Also, you may notice that it’s it’s not just the horizontal Lannister flags that are gone now, but also the vertical Lannister banners that once adorned the walls. Here, take a closer look:

We always knew King’s Landing would fall at some point in the shoot … and now it has! This means all the scenes featuring the city walls before they fall in battle have already been shot. Since an entire city street was built here, it stands to reason that much of the conflict will take place inside the city, once the gate is breached, so don’t dispair: there’re probably many days of King’s Landing filming left—we may see something yet!