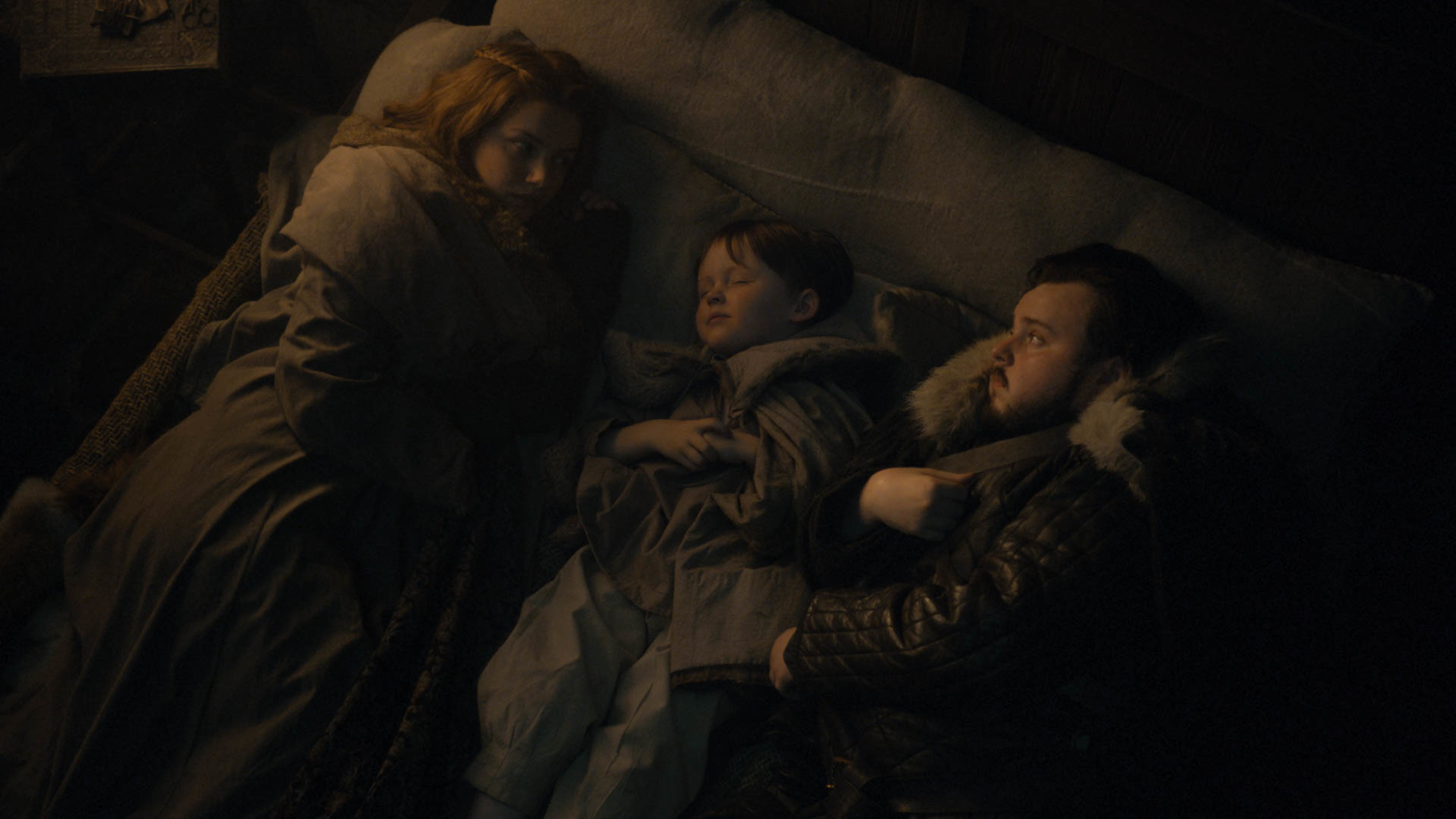 Along with Helen Sloan’s photos, there is this beautiful screen capture of Gilly (Hannah Murray), Little Sam (not so little anymore!), and Sam (John Bradley).

We may not even know a title yet, but we already have promotional photos for the second episode of season eight! There’re things we expected, like Jaime’s trial and everyone planning for war… and stuff we didn’t expect, too! 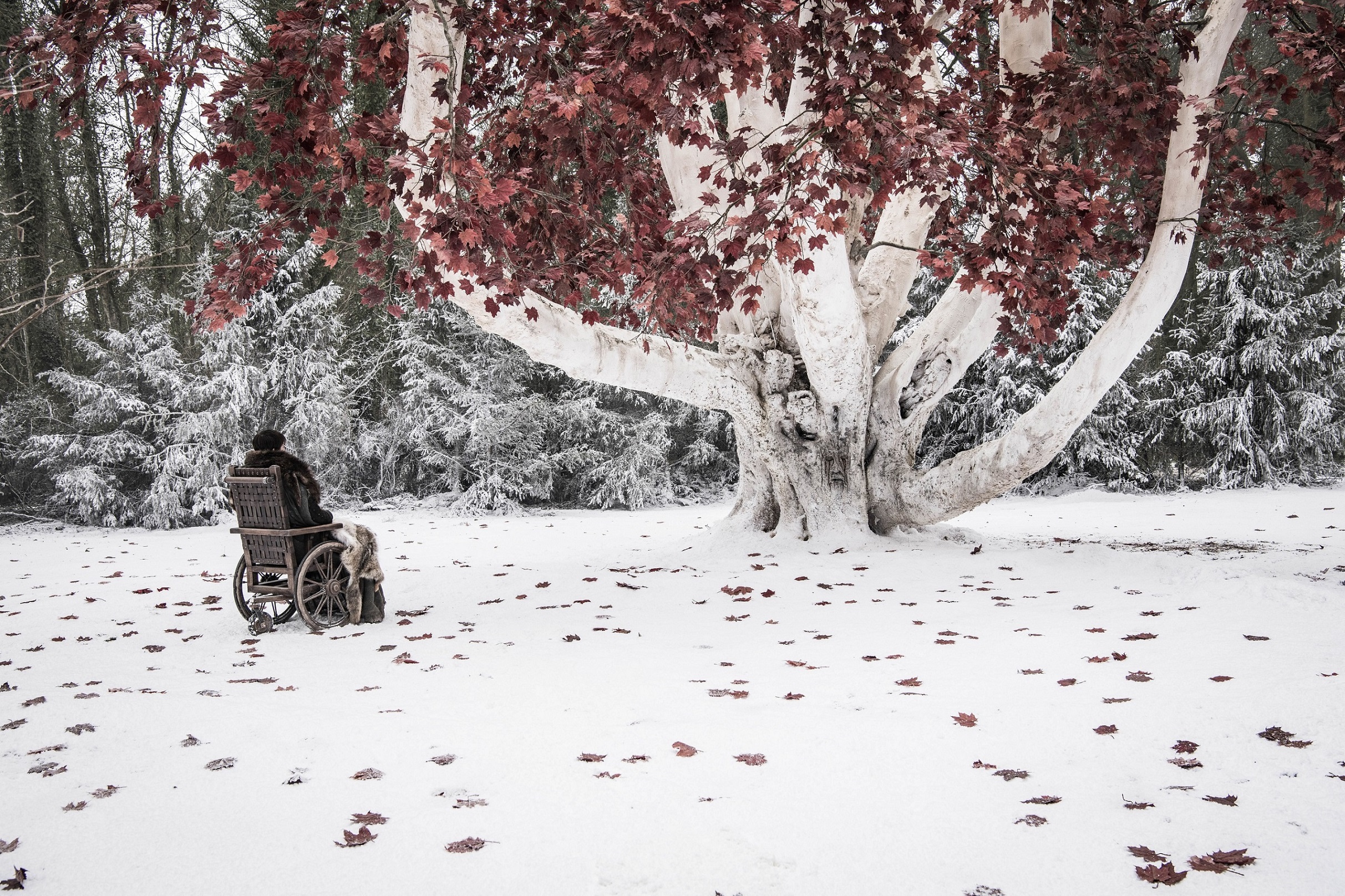 We start with the weirwood tree, and Bran (Isaac Hempstead-Wright). We’ve seen this a lot since Bran returned to Winterfell — which vision could he be having this time? 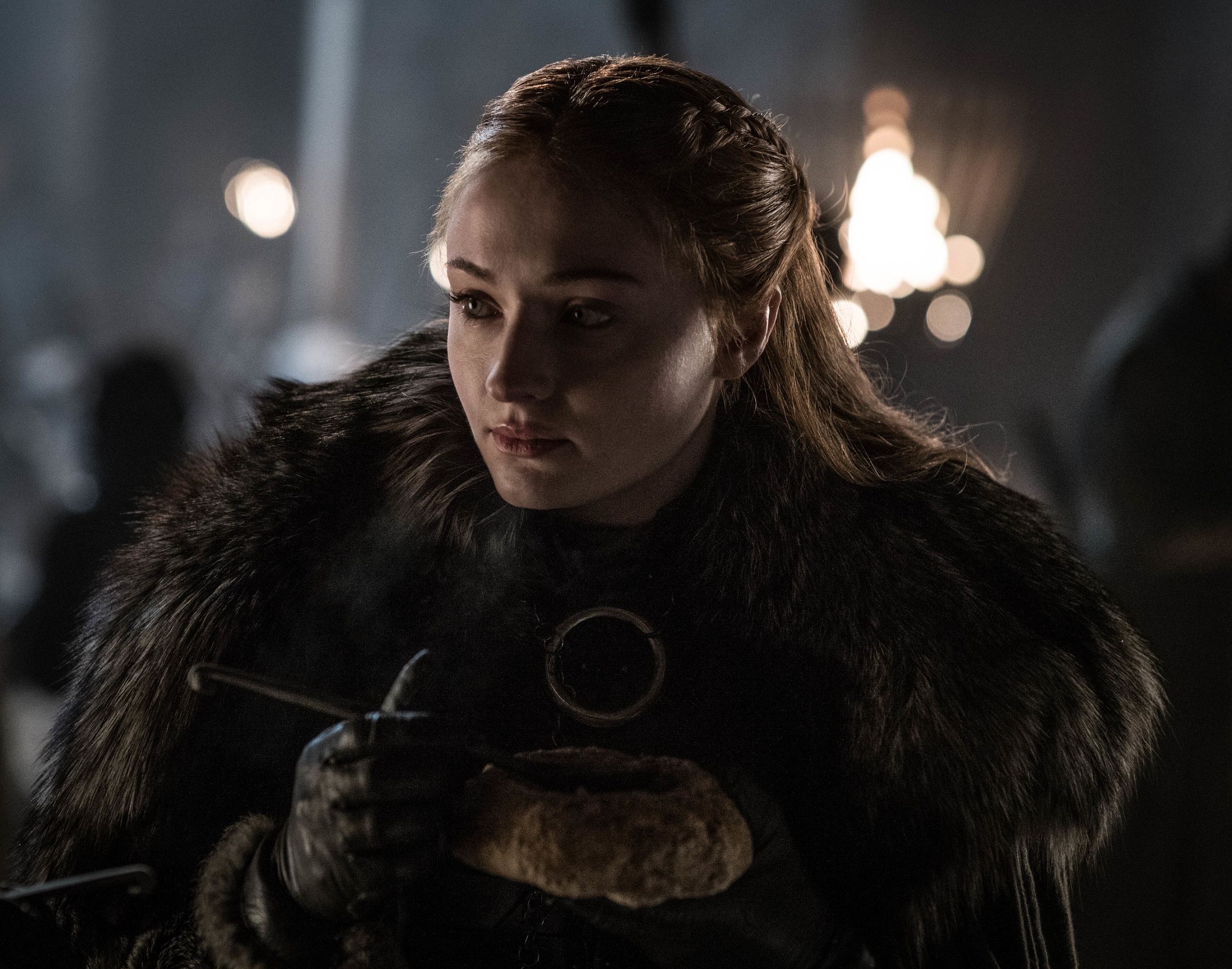 We’ve seen a low-res version of this photo of Sansa at dinner before. She looks thoughtful, maybe even a bit sad? It’s so hard to tell in the dim lighting — apparently all of Winterfell is light by a single candle these days. 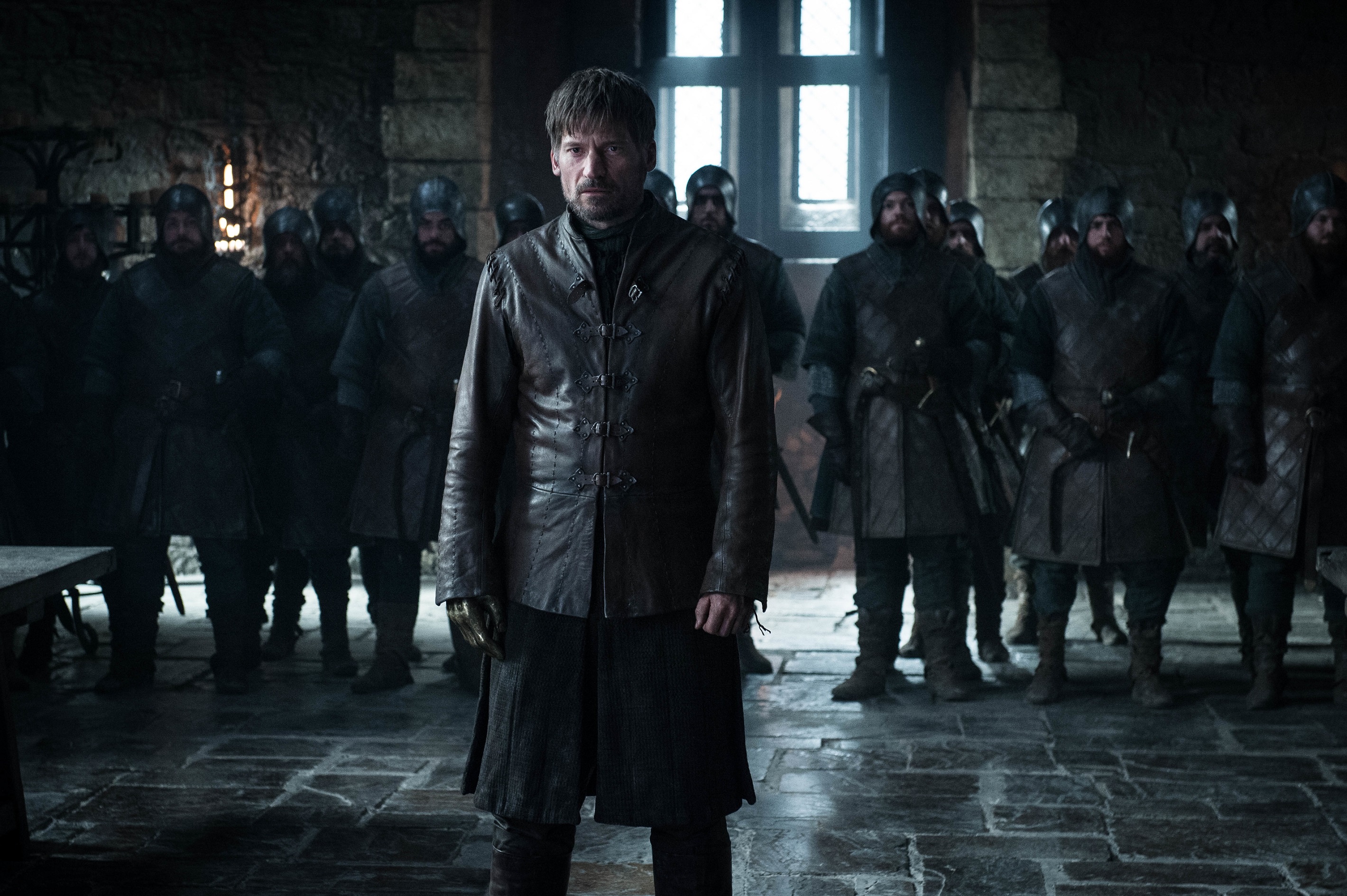 It looks like Jaime has will have some kind of trial in Winterfell, and if the armed guards behind him are any indication, it will be tense to say the least. Will Brienne speak for him? 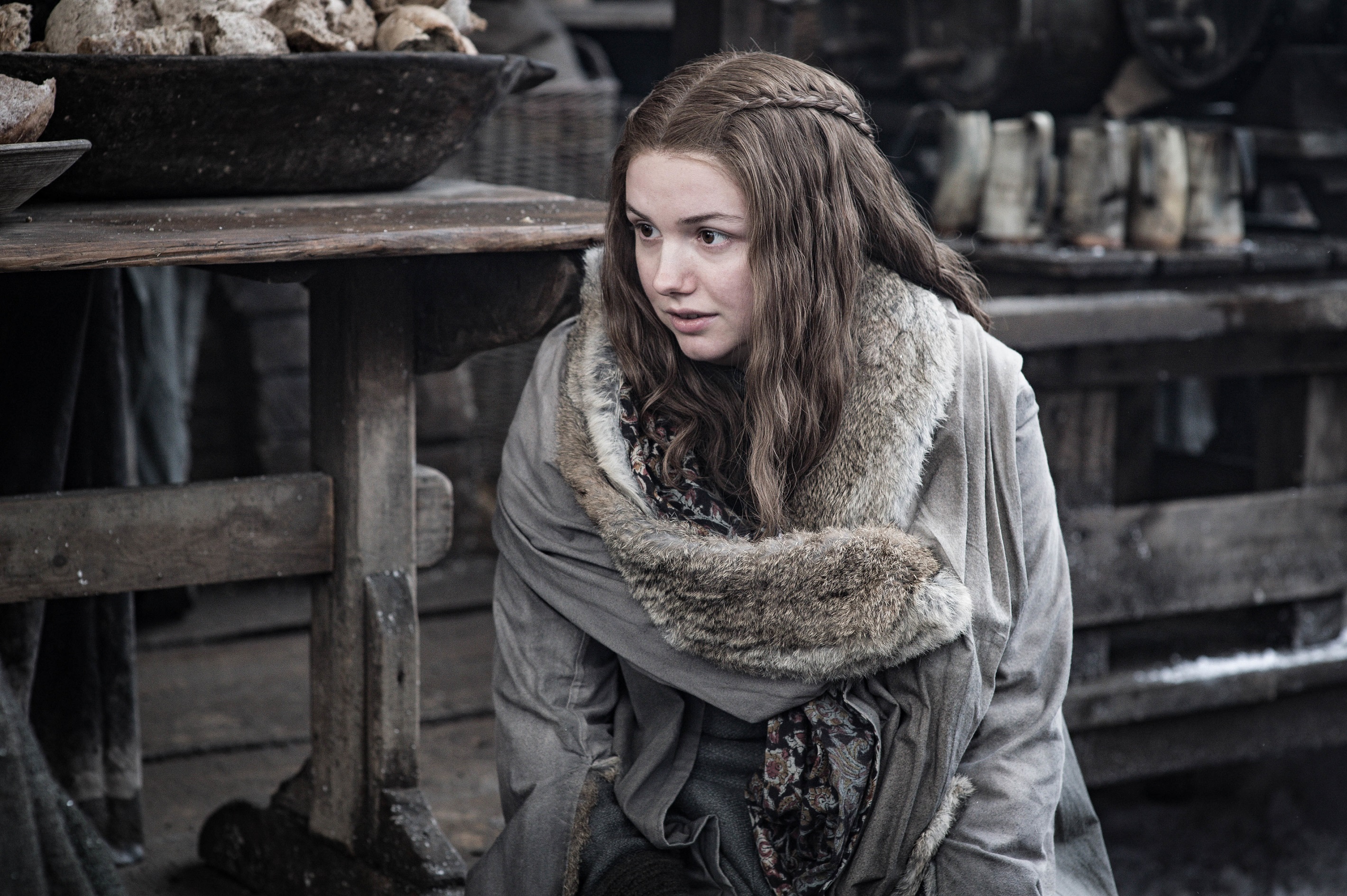 Gilly makes an appearance, at last! Hers and Sam’s is one of the sweetest relationships in the show. Who is she talking to here, though? For some reason, I don’t think it’s Sam. 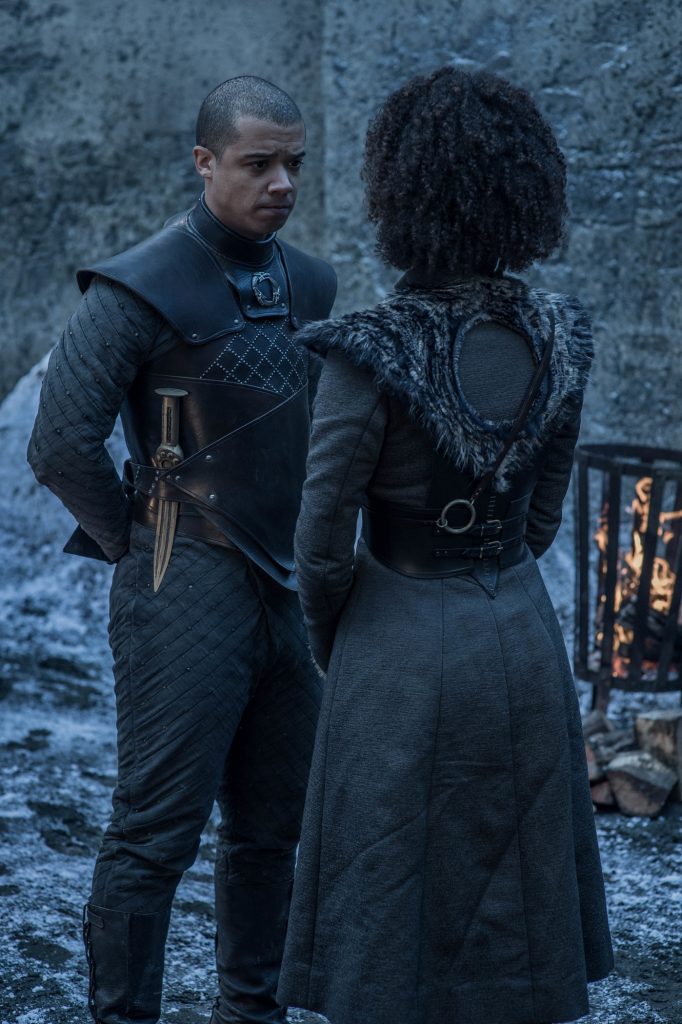 It’s Westeros’ other sweetest couple! Although this looks like another solemn meeting…is Missandei preparing to say goodbye to Grey Worm for good? 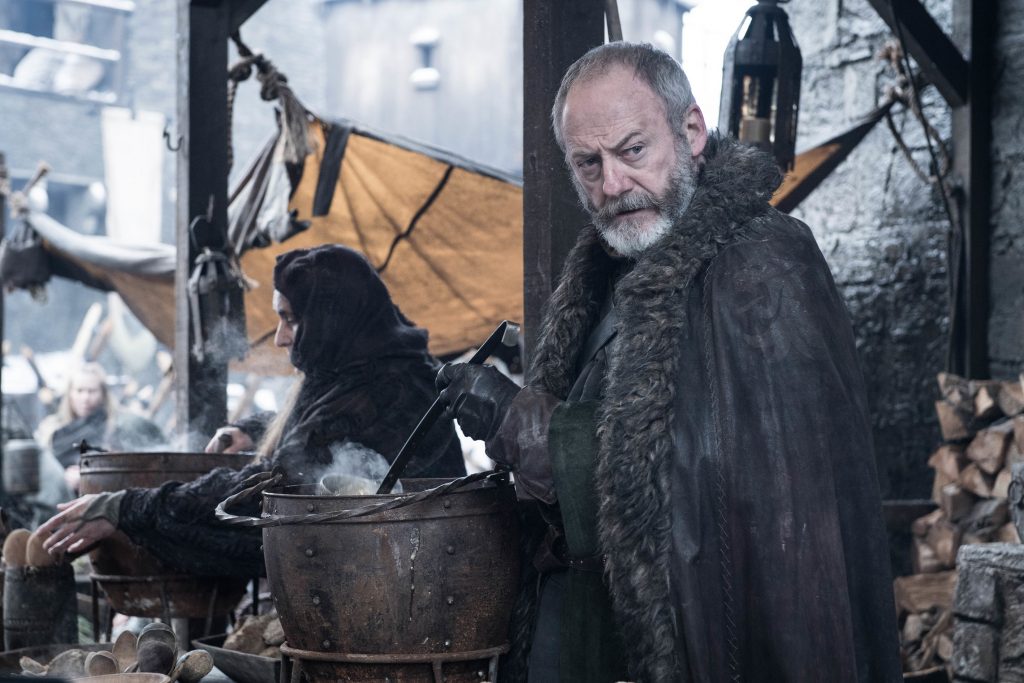 Davos usually has a speculative look — as one of Jon Snow’s closest advisors, he should — but this looks even more intense than usual. Is this the same scene with Gilly? Who is he looking at and is it the same person she’s seeing? 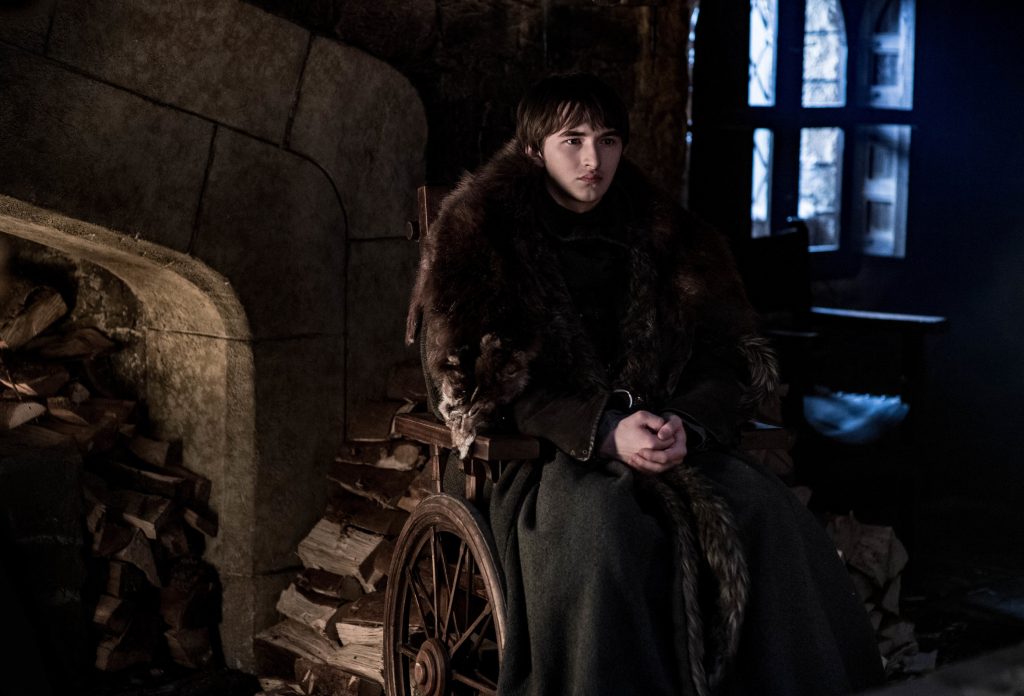 Bran seems to go only one of three places these days: the godswood, his room and Winterfell’s courtyard. He’s facing toward someone or something, though, not toward the fire as he usually is when he’s in his chamber. 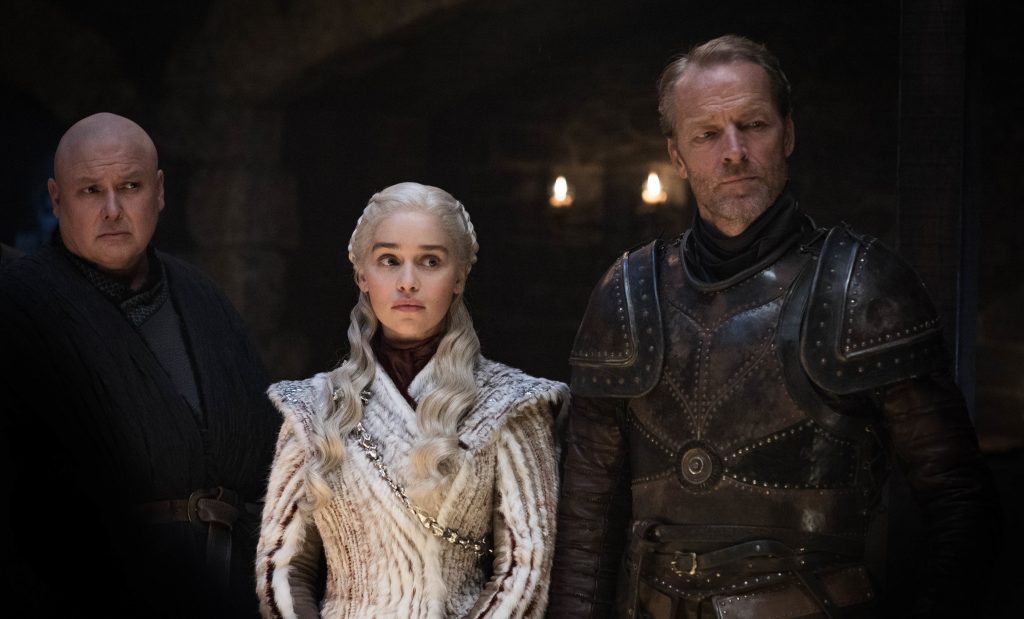 Varys, Jorah and Dany are looking solemnly at something (or someone?). This seems like a planning session or war council of sorts, perhaps. 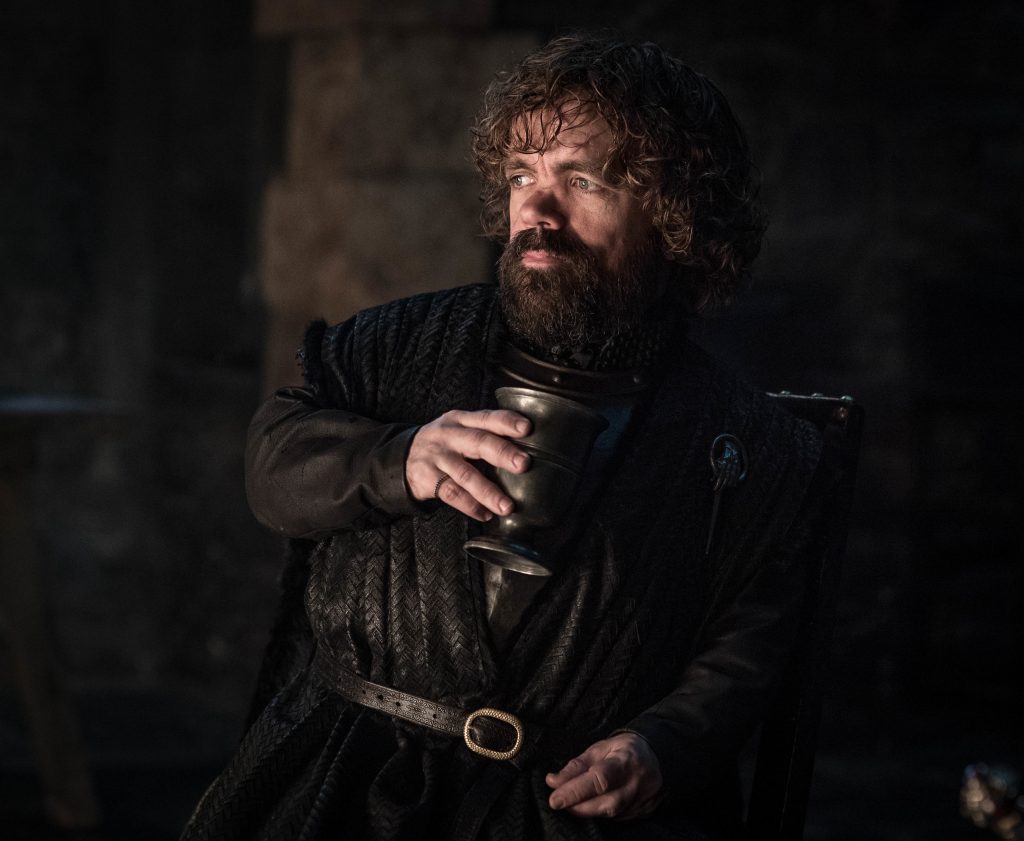 Based on the lighting and positioning, this photo of Tyrion, cup in hand, looks like it’s from the same planning session as the Varys/Jorah/Dany photo. 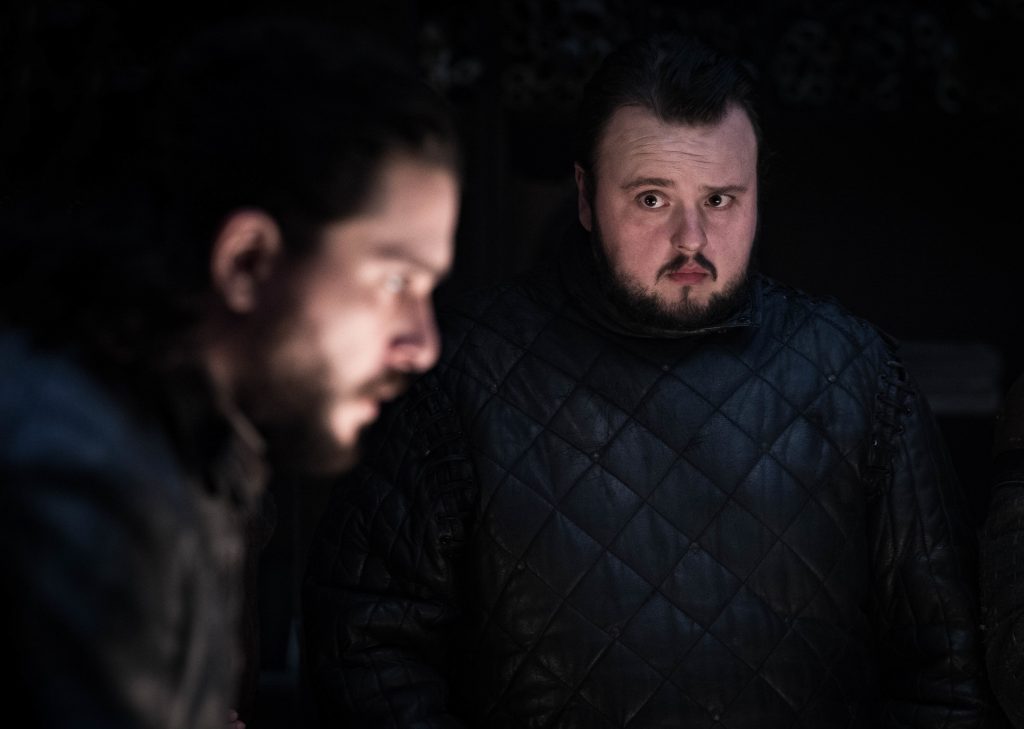 Jon and Sam also look like they’re part of the planning session mentioned earlier, and Sam looks as though he’s feeling more concerned for his friend than usual. 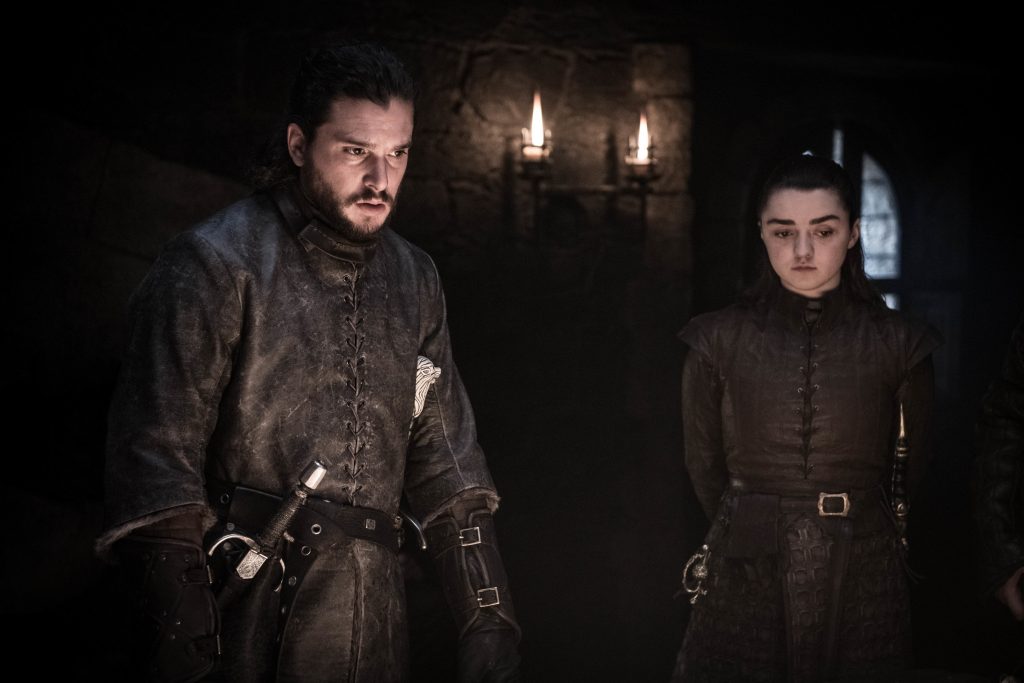 Another photo from the strategy session? Arya would be at home there, and they look as though they’re glancing down at a map or a table. 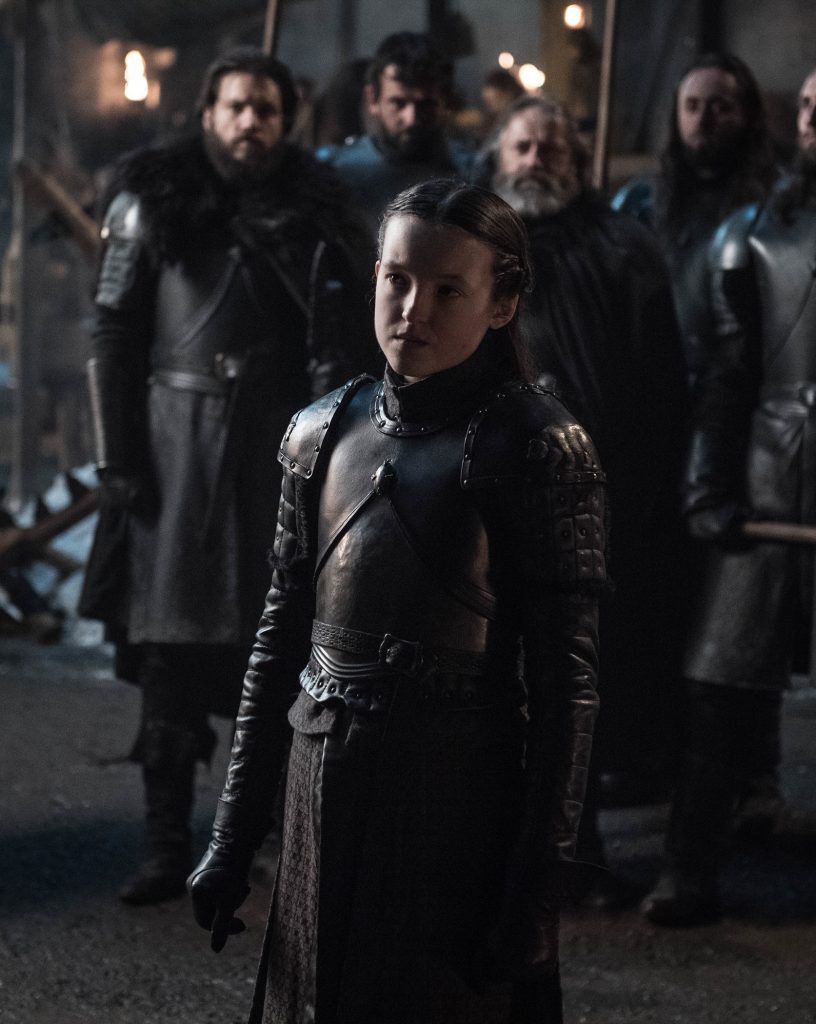 Lyanna Mormont has come out as no fan of Jon’s recent decisions, but what has our little she-bear wearing armor? It looks like this is outdoors — you can see some of the dragonglass-studded weapons from the trailer in the lower left corner. 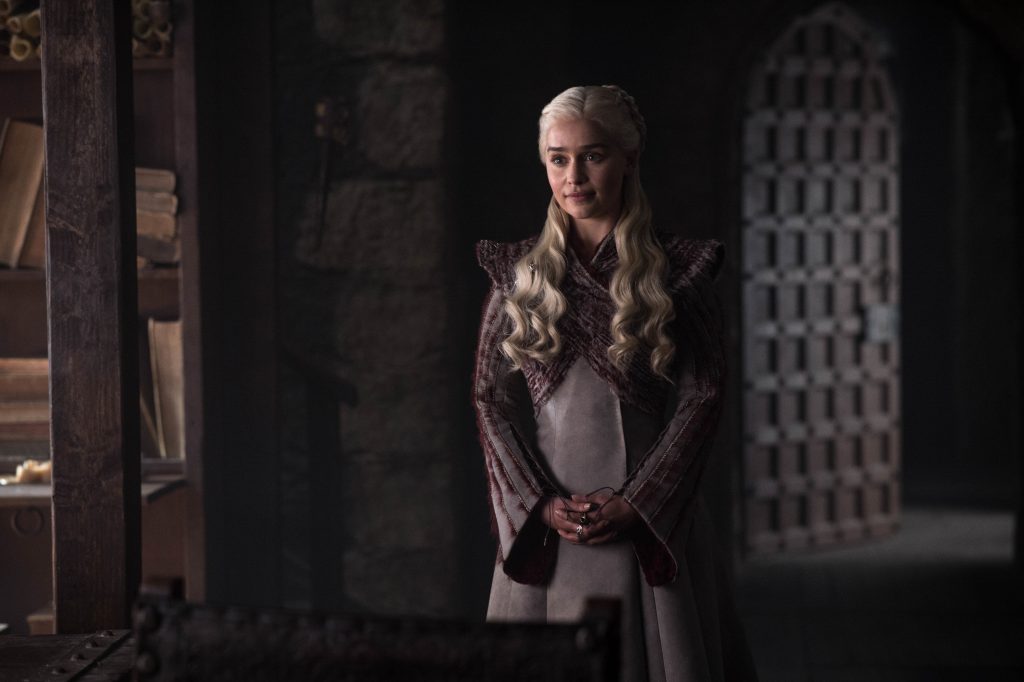 Finally, we have another view of Daenerys in the library at Winterfell. She’s sporting a new coat and looks thoughtful. It fits previous photos that hinted at a chat with Sansa in the library. Hopefully they start getting along! The Preview and a new piece of concept art at the official Making Game of Thrones blog confirm this meeting.

What do you all think about these new Episode 2 photos? Let us know in the comments!