Season 7 directors announced | Watchers on the Wall | A Game of Thrones Community for Breaking News, Casting, and Commentary 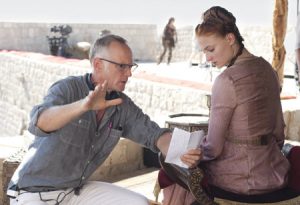 Gone are the days of waiting around for some director to let it slip that he was going to be working on Game of Thrones next season. Now they just announce it immediately after the previous season ends through PR man, I mean, Entertainment Weekly reporter James Hibberd. Here then is the director roster for season 7:

– Alan Taylor: An Emmy-winning veteran of The Sopranos, Taylor helped pioneer the visual storytelling style of the show when he helmed the pivotal ninth and 10th episodes of season 1, particularly “Baelor” (the episode where Ned Stark was executed). The Thrones producers were so impressed they gave Taylor four episodes to helm in season 2 – including the premiere and the finale. Then Marvel snatched him up for Thor: The Dark World followed by Taylor reuniting with Emilia Clarke to direct her big-screen role in Terminator: Genisys. Now he’s back on Thrones for the first time since 2012.

– Mark Mylod: A four-time director on the show, the British veteran of Showtime’s Shameless and HBO’s Entourage took on this season’s uniquely textured re-introduction of the The Hound in “The Broken Man,” as well as Arya’s exciting chase sequence in “No One.”

– Matt Shakman: A newcomer to the series. Shakman is best known for his work on FX’s It’s Always Sunny in Philadelphia, a comedy loved by Benioff and Weiss (the showrunners even wrote an episode, “Flowers for Charlie,” although it’s not one of the 39 episodes Shakman has directed). Shakman has also helmed episodes of AMC’s Mad Men, CBS’ The Good Wife and FX’s Fargo.

WinterPhil: So, the bad news: Miguel Sapochnik is not returning for season seven. I can only hope that means he has bigger and better things planned, because he deserves it. Those last two episodes this season were masterfully done. The good news is… Alan Taylor is back! In my opinion, he was the one who really solidified Thrones‘ cinematic style with his work in season one. Go back and watch that first season and see how different the first episodes are in their direction and shot selection. Taylor really broke away from that and gave the show a much more epic, cinematic feel. It was no surprise to me he went on to direct big-budget Hollywood movies. But now he’s back and I’m excited to see what he can do on this show with a bigger budget!