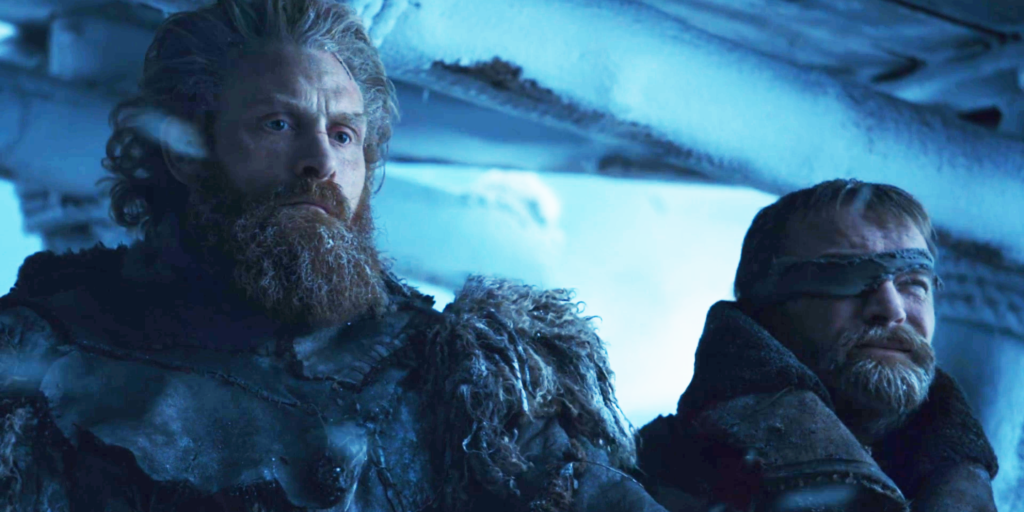 HBO recently released the PDF of the final script for the season seven finale, “The Dragon and the Wolf”, as the episode was nominated for its writing at the 2018 Emmys. Interestingly, the description of Tormund and Beric’s escape from the Wall more or less confirms that, yes, those two did indeed survive the Night King’s attack.

The action for that scene reads as follows:

Specifying that Beric and Tormund “run for their lives” makes it pretty clear that we’re supposed to assume that those two survive, which I’m sure is a relief for some viewers.

While many assumed that Beric and Tormund wouldn’t be relegated to off-screen deaths, controversial decisions in the past, such as the abrupt cut away (pun not intended) from Brienne’s execution of Stannis and Brynden “Blackfish” Tully’s out-of-sight, Samurai-style demise were enough to make many worry that we’d seen the last of Beric and Tormund. But from the wording in the script, it seems safe to safe that they did, indeed, escape the destruction of the Wall and will live to see another season.

Even if the fate of Beric and Tormund never struck you as particularly ambiguous, there’s quite a lot of fun to be had from reading the episode’s script. The narration is concise but dryly witty.

For example, here’s how Jorah Mormont’s reaction to Daenerys’ decision to travel by boat with Jon Snow is described:

The script is peppered with little descriptions that bring the story to life all on its own and it’s a testament to the show’s cast that these character details are so affectively present in the final product of the episode.

When Brienne says “fuck loyalty” to Jaime in the Dragon Pit, for example, the description doesn’t merely inform us that Jaime stops and turns to her. It reads:

This extra detail gives the action so much more weight and character than it might have had otherwise (though I don’t doubt that Nikolaj would have known exactly how to react to that line regardless).

We’re also given some insight into the beach brawl between Theon and Harrag. Turns out, the headbutt that Theon gives Harrag is “the single greatest headbutt in the history of filmed headbutts.” So, if you had ever questioned how that move alone was enough for Theon to turn the tide of the fight … well, there you go.

Lyanna and Rhaegar’s wedding is also given a beautiful description, most notably this poignant line:

You can read the entire script for yourself at Emmys.com. It’s well worth your time.

What scene from Game of Thrones would you love to read in script form? Tell us below.