Who is Sansa writing a letter to in The Broken Man? | Watchers on the Wall | A Game of Thrones Community for Breaking News, Casting, and Commentary 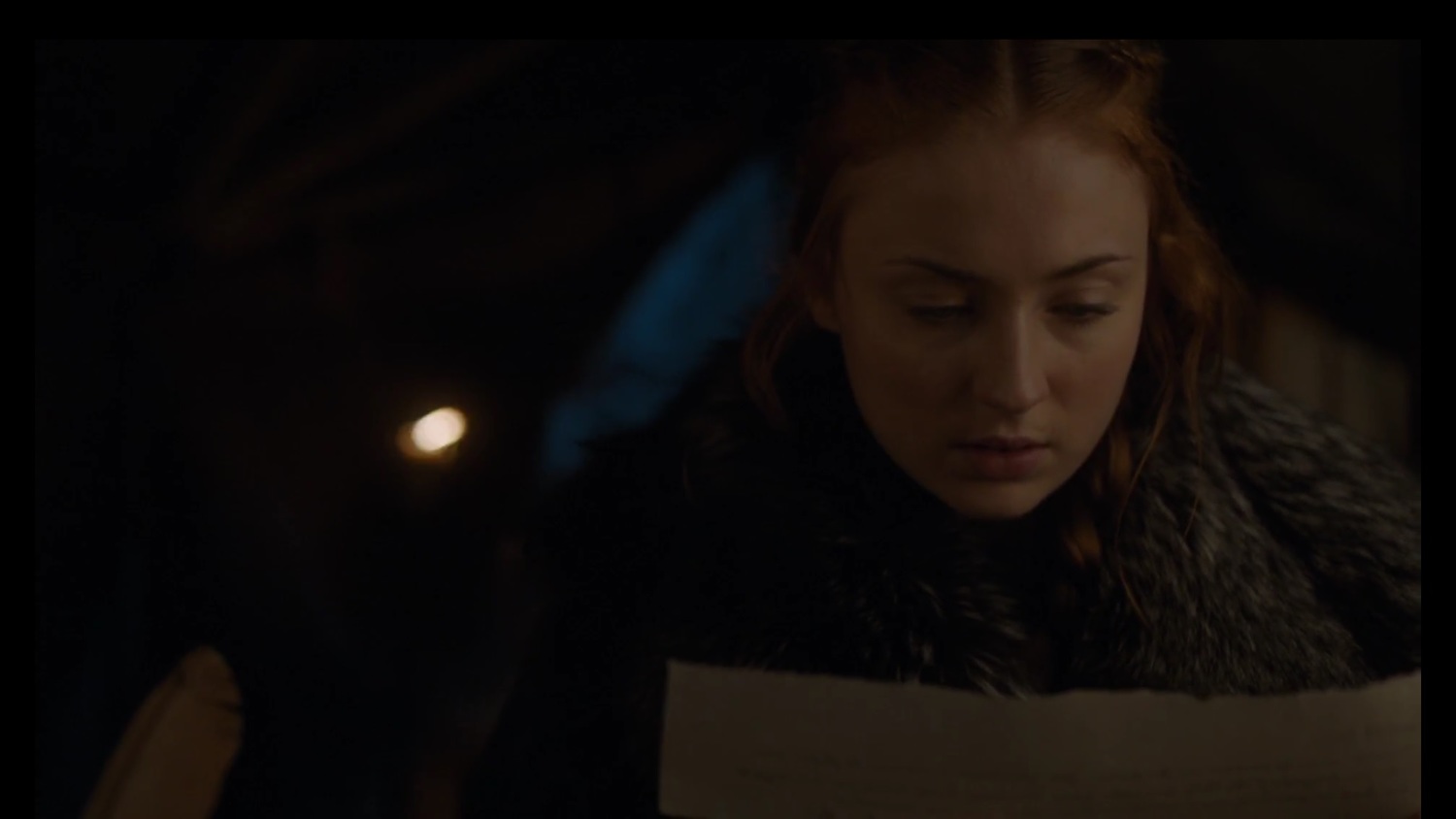 In the newest episode of Game of Thrones, the Stark gang finds themselves in a tight spot, with their journey around the North to recruit other houses not going very well. By their accounting, the small army so far consists of 2000 wildlings,  200 Hornwoods, 143 Mazins…and of course, 62 Mormonts. Up against the thousands of Bolton, Umber and Karstark men, things are looking bleak for Jon and Sansa’s cause. The siblings are at odds, with Jon wishing to fight with the army they have, while Sansa insists they need more men if they’re going to win.

It’s at this point in “The Broken Man” that Sansa is inspired by the sight of a maester’s ravens to send a letter. We’re not able to see who the letter is addressed to, or to make out the words in a regular episode watching. But now, thanks to the detective work of Reddit user CreepyPancakes, we have an answer as who will be the recipient of Sansa’s message. The contents of Sansa’s letter have been uncovered (mostly), revealing…

A request for assistance from the Knights of the Vale, and words all but confirming that the letter is meant for Littlefinger, as many have guessed.

CreepyPancakes dug around images from the episode and flipped the letter –

Until they were able to read the letter Sansa wrote.

“you promised to protect me […] Now you have a chance to fulfill your promise […] Knights of the Vale are under your command. Ride north for Winterfell. Lend us your aid and I shall see to it that you are […] rewarded.”

In Sansa’s meeting with Littlefinger, he expressed remorse for handing her over to Ramsay without knowing what he was, but with Littlefinger, you can never tell what his true emotions are. Is he truly regretful or continuing to play Sansa? Littlefinger never stops playing the game, but there may be some genuine feeling in there too, since he has a long complicated history with Sansa and her mother Catelyn. He already has indicated the Knights will be at her service, and Sansa is correct that the numbers of this new Stark army are too low. Plunging into battle with so few against the vast Bolton-Umber-Karstark alliance would be suicidal.

The question now is, is this a mistake on Sansa’s part? People were critical of her decision to withhold information from Jon after meeting with Littlefinger, and bothered by the implication that Sansa still feels tied to Littlefinger and his ways. However, she has learned a great deal from him and grown harder, and I’m intrigued by the last line- that he will be rewarded. Because Littlefinger has earned some payback, and should be justly “rewarded” for his actions.

Assuming the Knights of the Vale are brought north as she requests, will Sansa welcome Littlefinger back or will she take revenge at that point? I’m hoping for the latter.