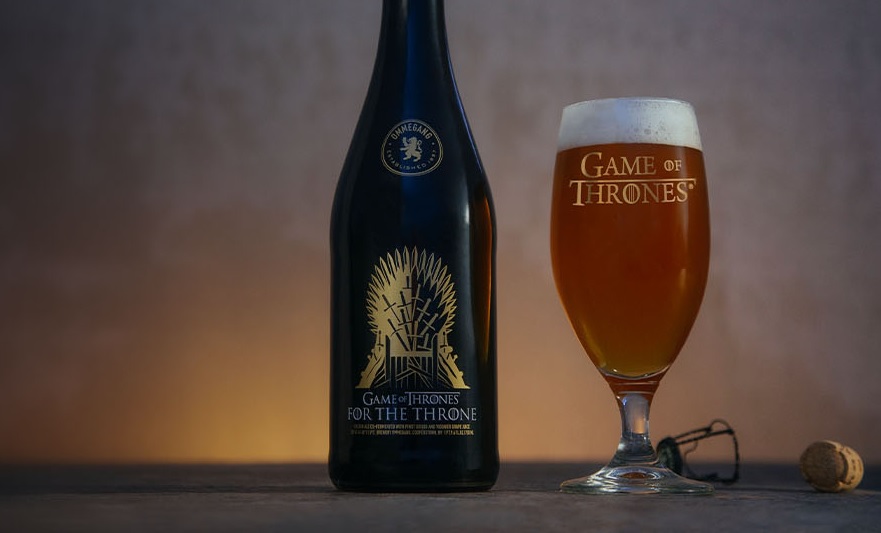 Much like the Royal Reserve collection, Ommegang’s newest Game of Thrones offering For the Throne is a unique beer; I can honestly say I’ve never had anything like it. It’s as if Ommegang read my last review saying how I prefer lighter beers, along with sweet flavors, and then granted my wish,yet in a way I never imagined. For the Throne is a golden ale, but one that is co-fermented with Pinot Grigio and Viognier grape juice, then bottle conditioned with champagne yeast to finish. This produces a new taste, one to enjoy going into the final season of Game of Thrones.

For the Throne has been the leading hashtag in the run up to the final season. On Twitter, Game of Thrones has been tagging their posts with the phrase, and it looks like they’ve gotten the message out to Ommegang as well. In the Royal Reserve Collection, each of the bottles was themed towards a specific character. This is a more general theme, as it’s combining a few different styles in one bottle, perhaps reminiscent of worlds colliding as the White Walkers march on the South and characters who normally wouldn’t work together are finding themselves unlikely allies.

For this entry in the collection, they’ve changed the bottle design back from the 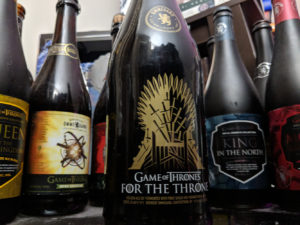 darkened matte-black bottles with bottle caps for the Royal Reserve collection to the dark brown semi-transparent bottles with the distinctive Ommegang corks on top. Also, in previous runs Ommegang used stick-on labels; this time they’ve opted for plastic shrink wrap- one more way they’re continuing to experiment with and innovate their designs. A possible issue with sticker labels is that for collectors like myself, they may start to peel off or rip over the years. Presumably this plastic wrap will last much longer, and can be wiped down.

Past the bottle, and onto the beer!  It has a very deep golden color- perhaps a Lannister gold if you’re trying to read some tea leaves as to who takes the Throne- and pours with a white foamy head that quickly dissipates. Which you’d expect from ales in general along with one mixed with wine and grape juice. It smells much more like the pinot grigio than the ale. Blindfolded, you may not be sure you’re about to drink a beer!

As a golden ale, you’d be expecting a few things from it. Smoothness and hoppiness, lots of added flavorings whether spices or fruits as golden ales work well with those, and a middle of the road alcohol value. For the Throne eschews expectations with the addition of the Pinot Grigio, Viognier grape juice, and champagne yeast and the first thing you’ll notice is the very strong alcohol smell. That makes sense, as it weighs in at a towering 9.5% ABV, leaning more towards the wine than beer on strength. It reminds me a bit of the Royal Reserve Hand of the Queen in how surprising it is to find a taste profile with an ABV that strong. 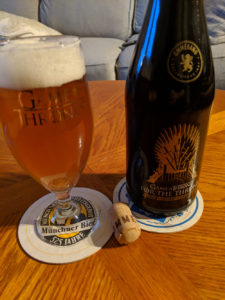 Overall, the beer goes down in three phases. First, you get the hoppiness you’d expect along with some caramel tones and typical golden ale flavors. Then, it all of a sudden changes and you start tasting the sweet and dryness of the wine. The announcement mentions pears, apricots, and honeydew; alas my palate isn’t refined enough to pick those out. It comes off more as a general sweetness and a bit of sugary taste, and finally a pleasing aftertaste that mixes them all together.

Unlike King in the North which was suited for cold winters, For the Throne is a beer that feels much more like a summer or spring beer. Light, sweet, easy to drink, the kind of thing you’d drink on a dock on a lake. Although, fair warning, the high ABV with the sweetness is a dangerous combination. This is distinctly a beer you should sip, maybe pair with a meal, otherwise you’ll be in for a rowdy night.

Other beers I found it similar to are La Fin du Monde, Golden Monkey, Don de Dieu, and the Dogfish Midas Touch beer. So if you like those, you should give For the Throne a try. It’s a beer that has a very unique taste, and I’d recommend it even if golden ales and Pinot Grigio aren’t your thing. You may find yourself a new style of beer to get into.

For the Throne is available now for purchase in those beautiful 750ml bottles and on draft, and we would love to hear what you think of it here! And thank you to Brewery Ommegang and HBO for sending us the beer to sample.

For the Throne, ommegang