The Problem with Giants and Mammoths | Watchers on the Wall | A Game of Thrones Community for Breaking News, Casting, and Commentary 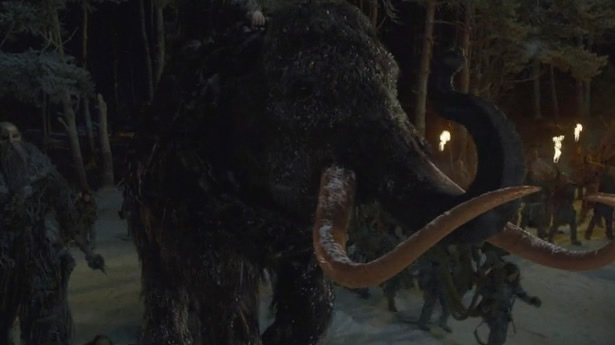 Oh my… look what the kids have gone and done now!

A man is honored to be a part of such a great community that was built with none other than the reader, the guest and the fan in mind, just as it should be. I consider the staff here at WotW second to none when it comes to news, casting, and commentary and I am equally honored to be working with each of them.

But before we get too deep into the desideratum, we need to discuss the elephant in the room (or to keep it Thronesesque, the mammoth). Leave it to the Unsullied village idiot to bring it up.

Grab a cocktail (not necessarily a cocktail video) and pull up a seat to your table. After all, this Wall was built for you…

Regardless of where you reside or where your travels may lead, traditions should and will follow. I have many, so without further adieu, my first disclaimer at WatchersontheWall.com:

Disclaimer: This explanation/discussion piece is NOT written to trash or reflect badly on one particular person or to badmouth anyone associated with the Dark Side(d) (from this point on referred to as “Giant”). It is also NOT a reflection of the thoughts or feelings of any other WotW staff members other than myself (although it very well may be).

And it will be rendered in at least 2 parts due to a laundry list of facts that I feel you deserve to know. However, this piece is not authored to persuade anyone from never visiting their site again or to get more visitors to WotW. That decision is up to the reader, as it should be.

If you are a brand new reader that is not aware of where the core of the WotW group originated, this article will probably interest you very little if at all. If that is the case please feel free to navigate to the main menu and enjoy the rest of WotW!

If you are still here, well, here goes…

I will always remember the sinking feeling I got when WinterPhil gave us the news. But for some reason, I was not surprised. Phil was opening a new chapter on his life that I was made aware of, and change is an understandable part of life. Sometimes it affects others positively. Sometimes, not so much.

But regardless, I will never blame him for the decision he made. I owe him a debt for he opened a door and gave me an opportunity to be a part of a community that gave me the great reward of nothing more than interaction between fans. That by itself has always been enough. No compensation guaranteed, and none requested (other than a t-shirt, which I never received, dammit!).

Immediately following the announcement and for a while, all was quiet. Business as usual. No changes made other than the initial announcement on the old site of the buy-out and the transition. A new editor was named.  But no pop-ups. No click bait. No news on alterations was essentially good news from my perspective.

Of course there was reader frenzy and discourse about the possible changes forthcoming, most of which the Giant unfortunately solidified later as legitimate concerns.

But honestly, I was cautiously optimistic. I was never impressed with their web designs or layouts, but I was also led to believe (at first) that the changes to the site would be minimal yet more functional. Phil had a site redesign in the back of his mind anyway.  And the new editor was adamant about staying true to the old design (a battle that by his own account was being waged behind the Giant curtain).

Plus, joining a collective of established sites with current readership that could flow over to us sounded promising. The quantity of readers growing was always welcome. But the quality of content provided to the readers was always the most important.

Somewhere along the line, someone lost that memo.

When yours truly was prompted for input on the direction of the site during the transition (which to be honest was never really requested), these were my remarks. One was a statement during a phone call, and one was in a written email.

This was context pulled from an email when discussing how the Giant needed to delicately handle the transition and have a plan. By the way, I wrote this with the utmost respect for the GoT/ASOIAF fan base after witnessing first-hand how passionate they can be. I think most of you will agree:

“However, you need to warn the Giant…. this is not the NFL.  It’s worse.  You think football fans are passionate….. shiiiiit…. they aint seen nothing.”

I know… intelligent, was it not? But the point was blunt and should have arguably been heeded.

However, the following statement on the phone was made with the utmost sincerity and I know the person it was directed towards will remember it:

“This is probably the best advice I can give you: Do NOT, under any circumstances, sacrifice the site fan base in order to bring in more readers. They are a loyal group, and they will welcome the growth in terms of more fans joining in. But if you’re intent is to go for content quantity over quality, you will reap what you sow.”

Shortly after that phone call, there was a notice received regarding “quotas.” The word “quota” of course ended up meaning “filler” and at that point, none of us knew how serious that would eventually become.

Now, in all fairness, the quota deal did not affect me directly. The brass knew my role and what I did and the fact that I was one of the only Unsullied on staff. They knew I did speculation and recaps and reviews and was available for anything that they may need a hand with.

However, my partners in crime on WotW and the new editor were affected a little more adversely. Fury delivered as she always does, repeatedly, for what is a thankless job: moderating the site and the comments. But when editing and moderating of posts and comments was pulled from the four of us who knew the site the best and without notice, it became quite obvious that the boys upstairs did not have a grasp on exactly what they had gotten into.

Our powers were eventually reinstated following a group email where the importance of moderation and editing (among other things) were discussed. But the red flags were flying and the concerns of readers and the contributors alike, at least to some degree, were validated early on.

However, of all the changes that were made early in the transition, it was the business left unattended that the Giant did NOT handle that baffles a man the most.

As I have never tried my hand at anatomical analogies, there may never be a more suitable situation as this. So here is my best shot for today…

Most businesses have a model. Most models are at least somewhat proven. For a group that boasts over 200 websites, there is no doubt that their respective model has been effective in the majority of situations.

But admittedly, this was unchartered territory for the Giant. And as in Game of Thrones, the Giant seemed to know his business. Yet despite his size, he was not wise enough to be able to lead the diversity it would take to unite the clans and make it successful.

Back to the analogy…

Leadership will come and go. The commander that may have had the insight to create or unite or lead can change. Buyouts happen. Acquisitions happen. Founders and CEOs and Presidents and Vice Presidents retire, or move on, or get canned. Regardless, success can be maintained with the right model. The brain can be changed. But it is rendered useless and can do absolutely nothing without its backbone.

And throughout the early stages, this is the unchangeable, most pertinent anatomical part that no one with the Giant seemed be concerned with. Fury, FaB, and HmR (and I guess arguably myself) seemed almost disposable in their eyes. To this day, I will never understand the logic involved with the brain choosing not to consult with the backbone and making sure it had a voice regarding important decisions about an entity that they themselves had been so instrumental in building.

But that is the way it was. There was little to no communication. The editor continued to fight the valiant fight, but his efforts were largely discounted and neglected.  Meanwhile, the Four went weeks without any updates. And what we did get from the top was covered with buzzwords and vagueness. We stood without contract, or contact, or non-compete.  We could have all packed the ship and got on the boat to Braavos and no one would have known.  We were a body of uncertainty. But yet we stood, ready to serve. The Watchers were at their post, as they should be.

One morning I sat down at my computer and was abruptly blocked from a site that I had been visiting for literally two years without fail.  However, on this particular morning, I was blocked completely by what appeared to be some kind of ad infiltration. At first, I mistook it for a virus. But then every other regular site I visit for daily news came up without issue.

And then, the dominos… all right before the busiest time of the year. The new brain was making decisions without considering the health of the backbone or the body, and everything we knew was about to change.  Completely.

A man shall return for the conclusion of this fiasco soon enough!  Until then, and sincerely, thank you all for joining us at Watchers on the Wall.  This site was built for you, the readers, and we cannot keep it up without your support.

Here’s to the first of many posts!  Raise a glass!  Take the Black! And may there always be peace in your realm.  -Oz