As more information on the Portstewart filming for Game of Thrones season 5 comes in each day, it would appear that a big scene will be shot tomorrow, August 7th.

One fan tweeted a picture of some filming details; unfortunately most of it is blurred out.

More game of thrones filming! New characters for S-5. Got a wave from Bronn. Big scene on 7th. #GOT #northernireland pic.twitter.com/txu7c0NByb

MAJOR SPOILERS BELOW THE CUT. *Updated spoilers below, as of 2:30PM*

An image shared yesterday gives us reason to believe that the scene in question may be a fight scene. According to this, Ellaria finds out that Jaime has come to Dorne to rescue Myrcella, after Jaime and Bronn encounter a Dornish patrol, resulting in a skirmish. 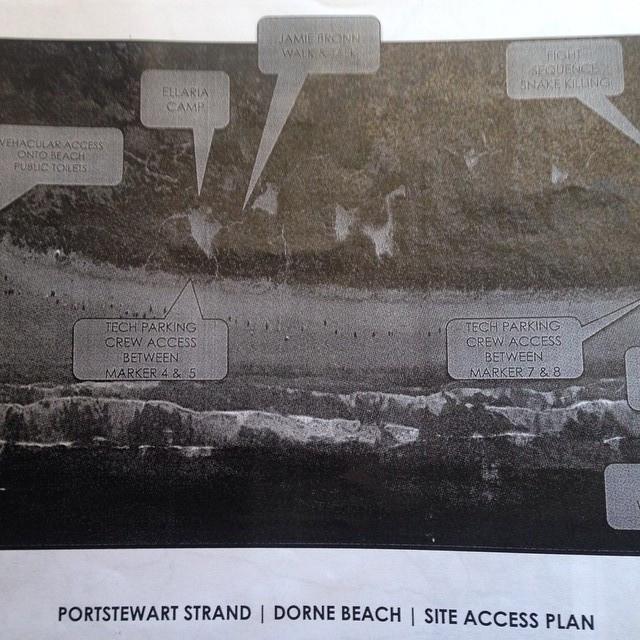 Another source tells us that the scene being filmed this week, the “snake killing,” is in reference to Bronn killing an actual viper which he and Jaime then eat.

This picture, taken on the set, would also seem to reinforce the fight scenes. Locals continue to take pictures on and off set. Here’s another look at a Dornish rider.

One of our sources tells us that Game of Thrones has been filming at Toome. This is where Northern Ireland’s largest river, the Bann, meets Lough Neagh. Filming is taking place on the river itself. Filming will also soon begin in Moneyglass. Pink GoT signs and crew members have been spotted close by. This is the same location in which a castle set was recently under construction.

For our final location today: a local tour company in Split, Croatia, has leaked what appears to be the filming dates for Game of Thrones this year- September 8-16th. This schedules Split filming before the other Croatian sites Dubrovnik and Šibenik.

In previous seasons, Split’s town center and waterfront have served as shooting locations as well as the nearby Klis Fortress and Žrnovnica quarry.

Cian: The “Snake Killing” referred to above may not necessarily be the killing of a Sand Snake, but rather an actual snake. Perhaps this action leads to the fight scene? Or maybe they’re completely unrelated, and only happen to be filmed in the same location? We also know that there is a stone-sided canal at Toome, where the river meets the lake. Could this point towards anything in particular?