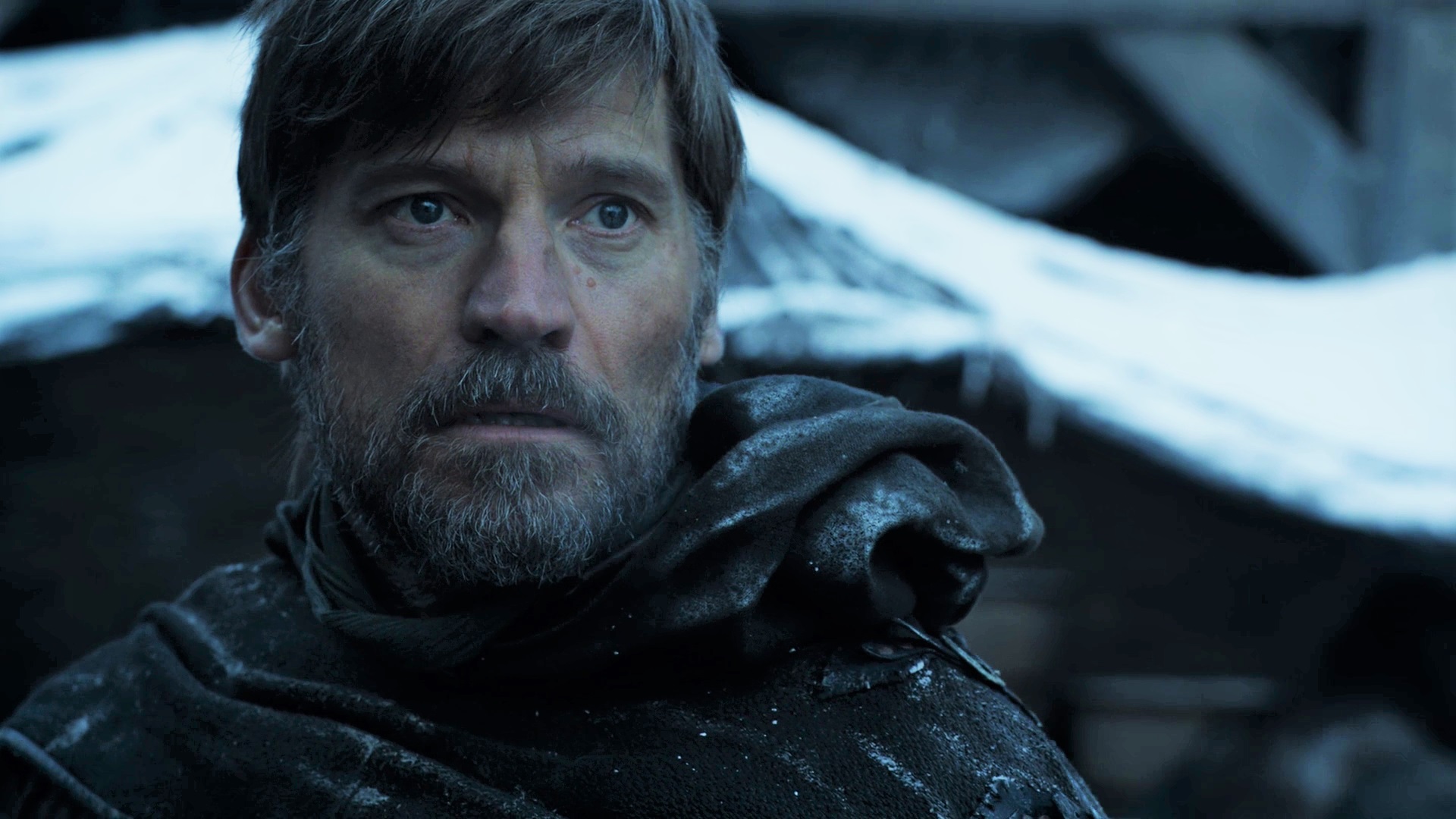 In new interviews about “Winterfell”, the season eight premiere, Nikolaj Coster-Waldau discusses Jaime’s cliffhanger with Bran; John Bradley talks about Sam’s scenes with Bran, Jon, and Dany, about whom he has a pretty harsh and controversial outlook; and the creators behind the new title sequence offer all the details. Also, in a wonderful piece, Game of Thrones producer Bernie Caulfield finally gets the recognition she deserves!

Speaking to Patrick Shanley of The Hollywood Reporter, Nikolaj Coster-Waldau talks about his short but significant appearance in the season eight premiere:

“I’m sure [Jaime] went through all kinds of scenarios of what would happen when he made it to Winterfell. I think that’s the last thing he expected to see,” Coster-Waldau says. “It’s the same conundrum as in episode one of the whole show: if this kid—if this young man now—tells anyone what he knows, Jaime’s in trouble. But then again, [Bran] did say earlier on in the episode that he was ‘waiting for an old friend’, so…”

Later in the interview, he also discusses his experience with Lena Headey and the writers, keeping all the secrets, the ending, and Jaime’s relationship with Brienne. 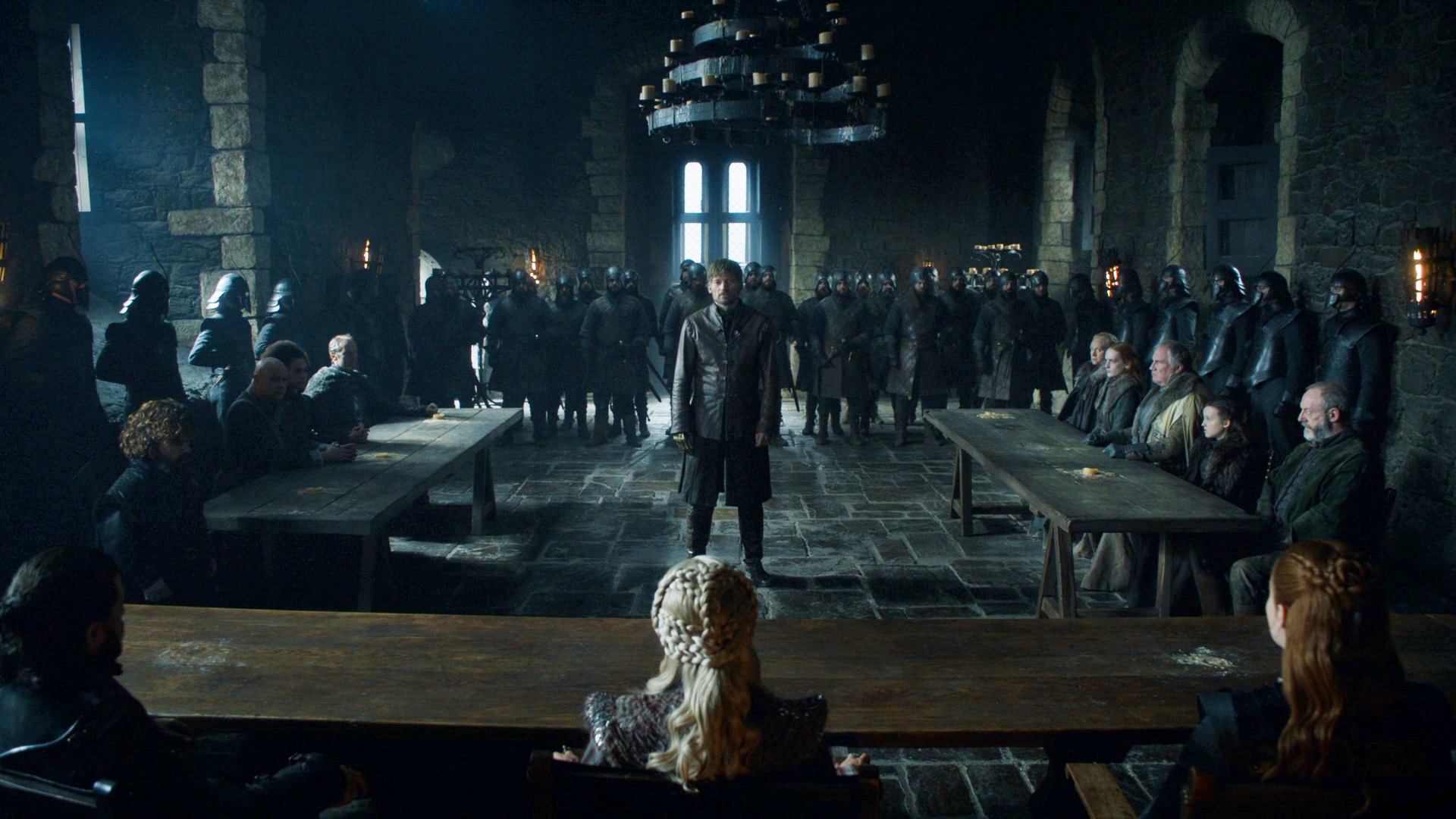 Meanwhile, at Variety, Coster-Waldau looks back on the show’s legacy:

“I think working with an amazing group of people, especially on an experience as strange as this, is the best [part of the Game of Thrones experience],” the Danish actor says, “and I will miss seeing all of these people. As an actor, I’ve never worked on anything this long. Families have formed on this show. People have gotten married and divorced. Kids have been born. It has been quite something.”

“It never ceases to amaze me that this show has traveled so far,” Coster-Waldau reflects. “I think if before someone explained to you what this show was, I don’t think you’d ever think it was going to be the biggest show in the world.” 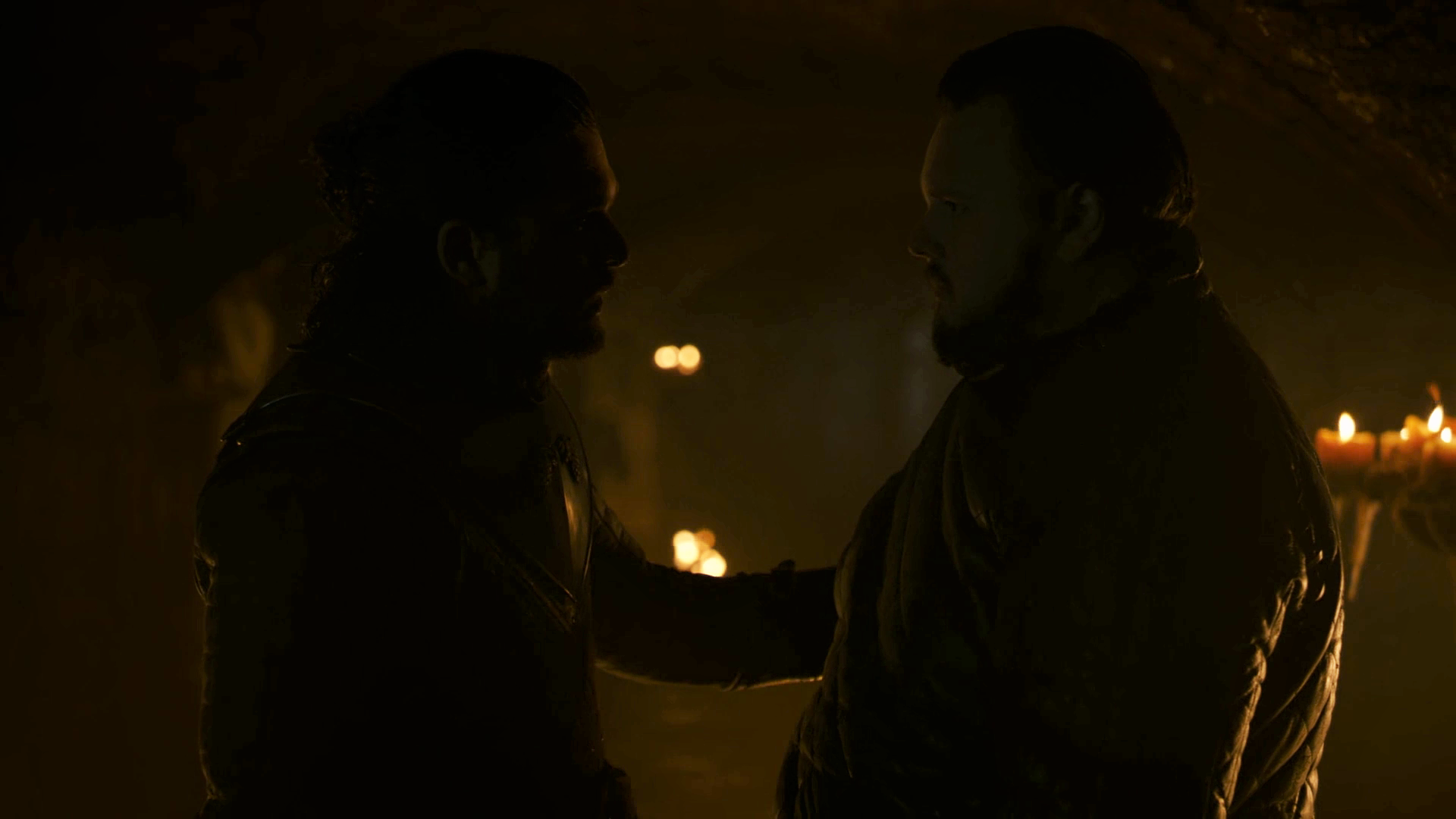 At The Wrap, John Bradley discusses his immense—and stellarly performed—role in “Winterfell”, beginning with Sam’s scenes with Bran… or rather, the three-eyed raven:

“There’s something really eerie and disconnected about it,” Bradley says. “When you are acting against Isaac, when he’s in character, it’s like you’re speaking to him from the other side of a wall.” Though Bradley admits that can be a challenge, it also “injects something into your performance. You find yourself overcompensating for the lack of response that you get, like people would do if they were talking to somebody like that.”

As for Sam’s devastating moment with Dany, Bradley has some harsh words about her, though he’s speaking strictly from Sam’s perspective: “Sam is now very, very aware that Dany is very imbalanced and very volatile and in quite a dangerous state with people,” he claims. “She says, you know, ‘They refused to bend the knee.’ And that’s a very pragmatic way of dealing with it, ‘They disobeyed me, and so I killed them.’ And in that moment he sees what a dangerous figure she is and that’s what motivates him to tell Jon.”

“He’s probably dreading telling Jon Snow that very sensitive piece of information because nobody wants to hear that,” Bradley says. “It’s only because of […] Jon actually being the true heir to the Iron Throne, it’s only because things are in such a precarious state with the person who everyone thinks should be on the Iron Throne, who is such a volatile character — that’s what is actually pushing Sam on to relay the information.” 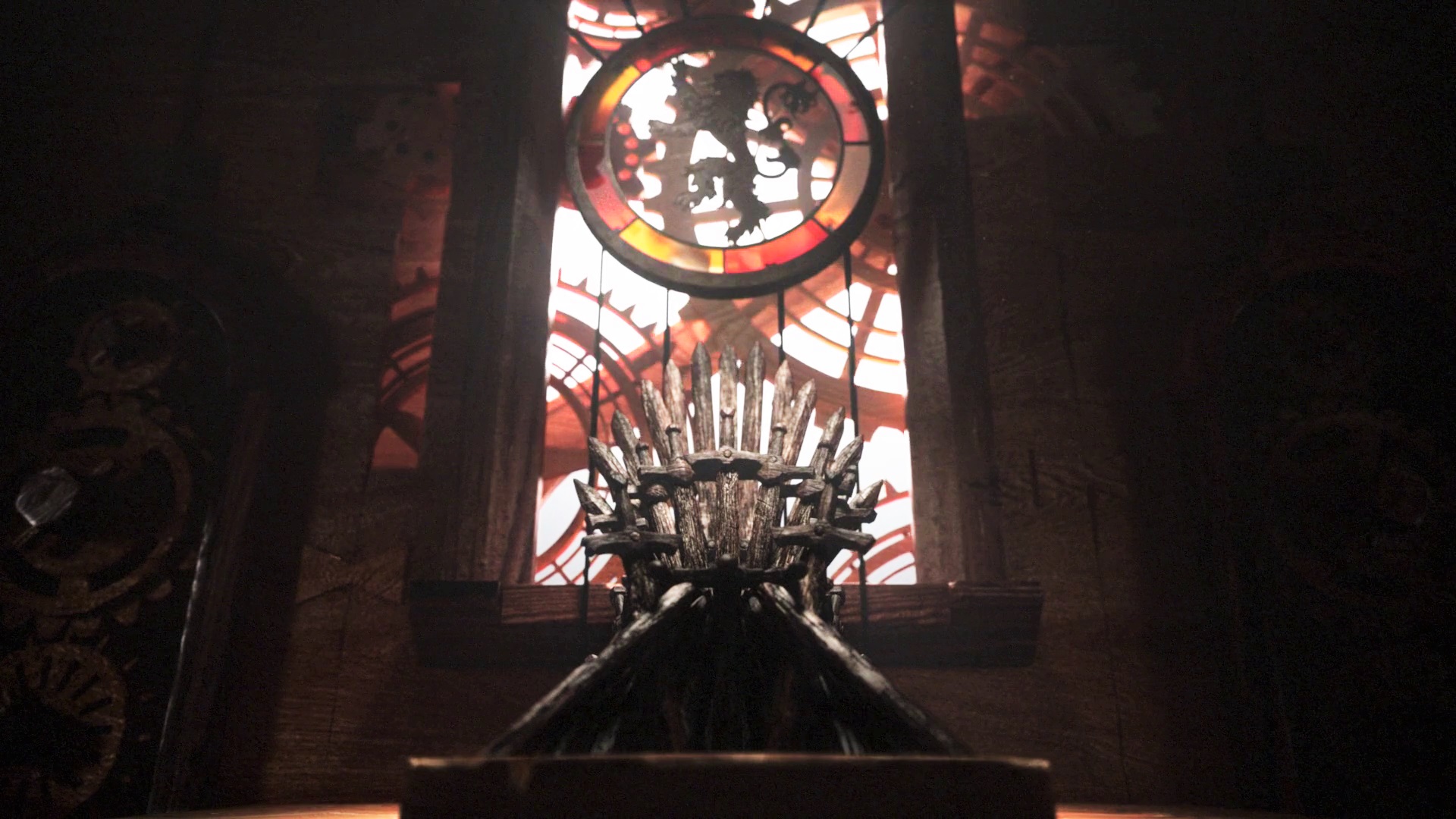 Also at The Wrap, CG director for Elastic Kirk Shintani discusses the work of his team of designers and animators on the award-winning Game of Thrones title sequence, which was for the first time ever completely remodeled from the ground up for season eight:

“In the crypt, you’ll see Lyanna Stark’s statue in the very beginning. And it goes really fast,” Shintani helpfully points out, as an example of their attention to detail, which he attributes to showrunners David Benioff and Dan Weiss: “They wanted to make sure that things like that are in there for the fans and they can recognize that stuff and that stuff is kind of a reward for paying attention and following along.”

They have also added elements they have wanted to do for years, such as army movements being marked, which we see as golden dots “representing the White Walkers’ march south.” There’s also the change in the astrolabe; while it told the history before the events of the series before, it now depicts major events from it, namely the fall of The Wall, the Red Wedding, and the birth of Daenerys’ dragons:

“I think adding these new scenes to the astrolabe is meant to be a reward to the viewers, that they have witnessed events that have turned into a lore that have been realized in the relief sculptures on the astrolabe bands, much like the existing depictions on the astrolabe bands on Seasons 1-7 that we don’t experience on the show,” Elastic‘s director explains. “So in a way, it’s kind of a new chapter where we’re acknowledging that in the first seven seasons, we witnessed massive historical events.”

For those avid to get as much as possible from the premiere, you may get hints of future episodes if you pay close enough attention: “Everything that’s there, is there — if that makes sense,” Shintani enigmatically says, before clarifying: “All the little bits and pieces that we wanted to put in, they’re always kind of there, whether or not they are noticeable or if you actually pay attention to them. That’s kind of something that we wanted to make sure of, that it felt like it’s a set piece that’s sitting there and you happen to catch something in Episode 1 at a certain point and time. And as the episodes progress, you know, as the set piece changes, the things that you notice happen later, you might find little hints of those same things in the previous episodes.”

As a tease for the series finale title sequence, Shintani claims they were “finally able to put some of the things” they’d wanted to do for years. What could that possibly mean? 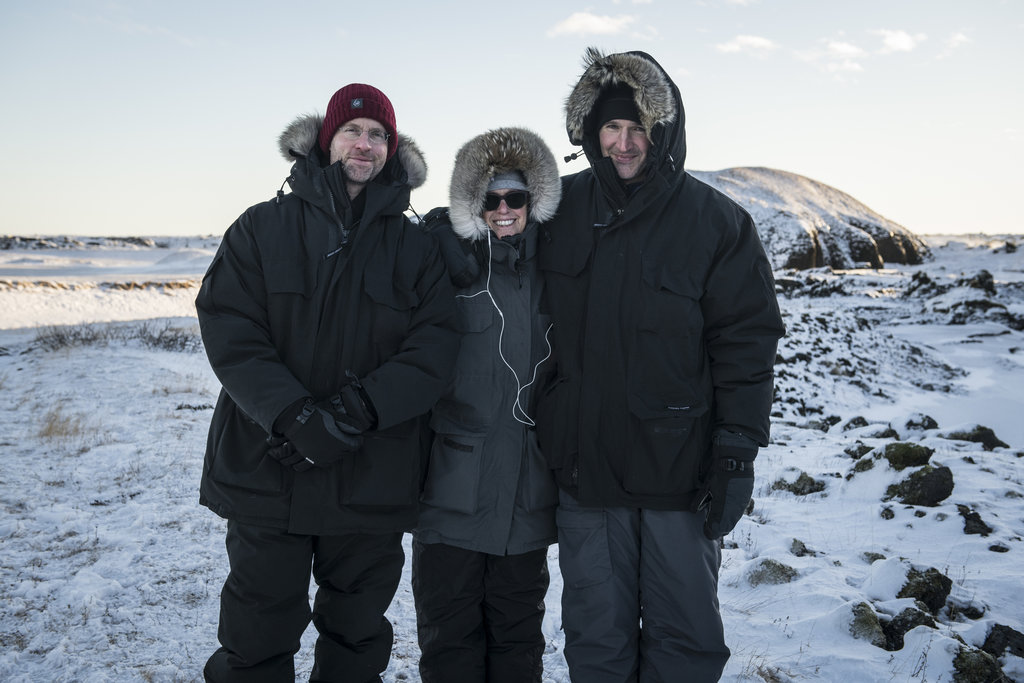 Finally, for something less premiere-related, there’s a wonderful new feature about Bernadette Caulfield in The New York Times which you should all read in its entirety, so I’ll only offer a few highlights here. If you don’t know who Bernie Caulfield is, she’s one of the main producers in Game of Thrones, the one who makes the intricate production machine run smoothly if you believe the showrunners—and you should:

“We only made it this far because of Bernadette Caulfield, the greatest producer alive,” co-showrunner David Benioff says. “The single best thing that ever happened to the show,” he says together with fellow showrunner Dan Weiss. “Without her, the whole thing would have collapsed under its own weight long ago.”

“There are so many versions of ‘Game of Thrones’ that would have fallen apart under the strain of producing 10 increasingly big hours of television on a 12-month schedule,” they elaborate. “Pretty much every version except the Bernie version.”

And the cast agrees, having nothing but praise about her. Emilia Clarke calls her “the beating heart” of the show; Sophie Turner sees her as “the woman” she wants “to grow up to be like”; Lena Headey says she’s “the true Mother of Dragons.” You get the gist.

Caulfield, of course, doesn’t take the credit. “Well, I wish I was that important, but obviously it takes a major team to put it together,” she says. “My job is to make whatever they write on the page come to the screen.” Oh, that easy, is it?

I won’t give away any more, as I insist you read the feature in its entirety. It’s worth it!