Filming in Spain may bear the brunt of leaked revelations because of us spoilerphile fans, but that doesn’t mean Game of Thrones isn’t also hard at work back at its Belfast headquarters and all around Northern Ireland. And so, below the cut we round up the appearances of much of the main cast, who have returned to Belfast, many of them presumably to film one of season seven’s main action sequences at Wolf Hill Quarry.

Meanwhile, and for an entire week now, El Barrueco de Arriba in Malpartida, Cáceres has been home to one of the show’s three production units, in the making of another one of season seven’s major setpieces. A few days ago we our first good look at one of the factions preparing for battle. Since then, new pictures from that same day have surfaced, revealing a never-before-seen army from the House of a main character.

When actors don’t broadcast their location, Belfastites got us covered: Brian Griffith shared selfies with Sophie Turner, Iain Glen and Kristofer Hivju, pinpointing their location as of a few days ago (Though, since then, Hivju and Turner have left the city.) Kit Harington was also sighted in Belfast —Going to the dentist, apparently.

Thank you for signing my book for Giorgia my daughter @SophieT @SophieTurnerCom @GameOfThrones @GoT_Cast such a pleasant lovely person x pic.twitter.com/x6GyTFtVLL

Finally got the courage to ask for a quick photo, very nice guy and great actor!!! @serjorahsarmy @GoT_Cast @GameOfThrones pic.twitter.com/HFgQtiXs7A

Such a nice guy, was a pleasure and thanks for signing my book much appreciated big man!!!! @KristoferHivju @GameOfThrones @GoT_Cast pic.twitter.com/FslL4LJ2YD

Work is much more exciting when Kit Harington stops by..

Back in Cáceres, some of the talent involved in the three-weeks Malpartida shoot have been sighted as well: Nikolaj Coster-Waldau, Jacob Anderson and James Faulkner. Anderson’s presence in the city points yet again to our initial reports being wrong about the Unsullied: It seems they will in fact take part in this massive scene.

Despite the smiles from the Malpartida cast, apparently some of the extras are not happy at all with the treatment they have received on set. Modexpor, who handle the hiring of extras in Spain, has been sued for breach of contract. Pablo Serrano and forty other extras have filled a formal complaint to the Work Inspectorate, alleging unpaid overtime, unpaid transport to Malpartida, as well as unnecessarily harsh conditions in these 15-hour days, such as the production giving them almost no time for lunch. When Serrano asked a Modexpor representative about overtime, she reportedly answered: “No matter how many hours you work, you’ll get paid the same. There is no overtime.”

As for what these aggrieved extras are shooting at Malpartida exactly, that must go after the prerequisite spoiler warning: There are season seven spoilers ahead! Beware!

HahPhi already showed us Dothraki riders, Lannister lancers and archers and a glimpse of what looked like Tarly soldiers along with their lord and his preferred son. HahPhi‘s new photos from Los Barruecos reveal the appearance of the armored Tarly soldiers in more detail. We can also see two as-of-yet enemy houses working together: 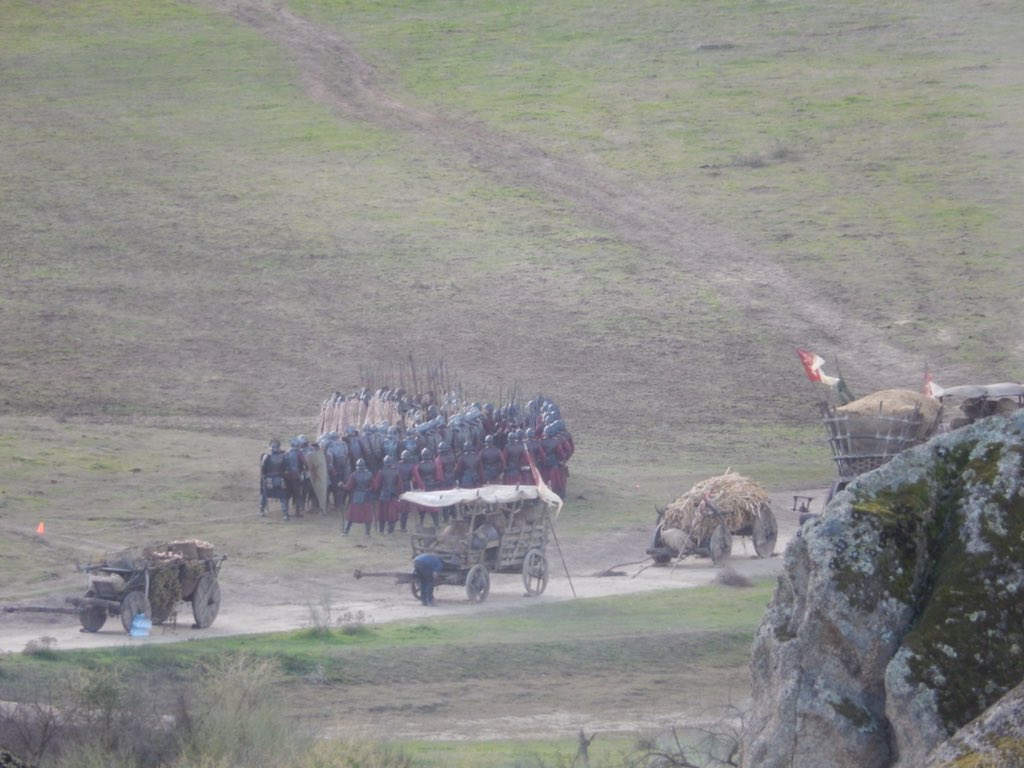 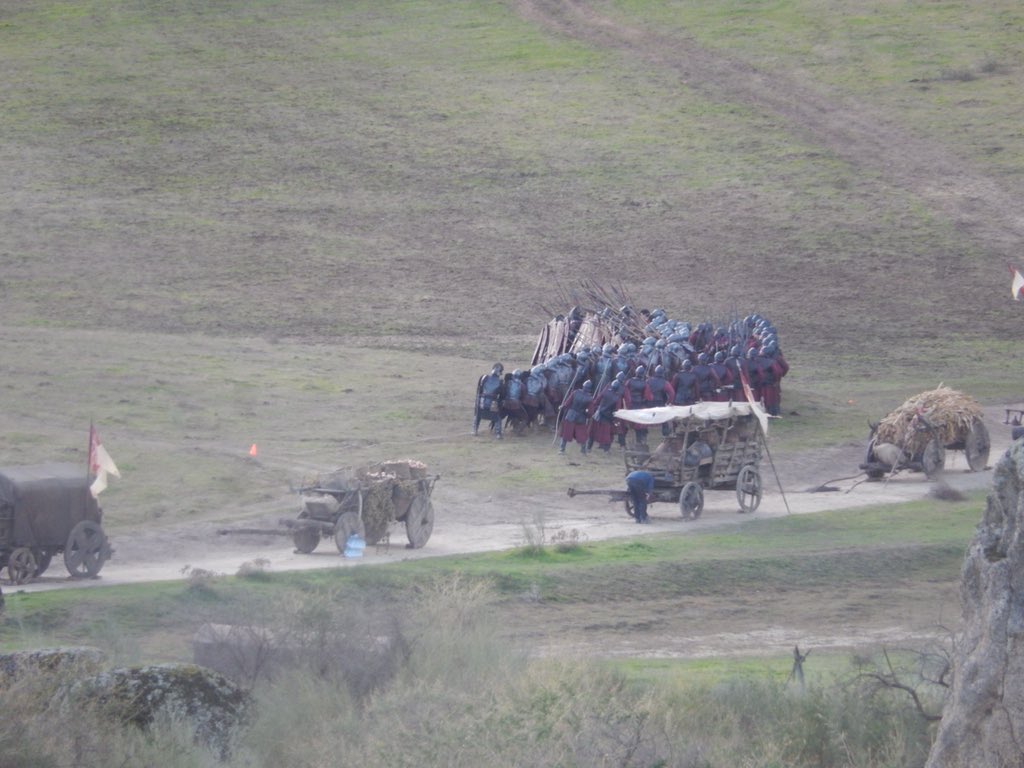 Los Siete Reinos has exclusive pictures that show the scene in even more detail:

In The Winds of Winter, Olenna Tyrell rebelled against Cersei in favor of Daenerys. As Sam’s House is a vassal of the Tyrells, these photographs may come as a surprise: Tarly soldiers are strengthening a Lannister shield wall and protecting Lannister archers. When the Dragon Queen comes and ambushes the Lannister caravan with Drogon, her Dothraki horde, and perhaps the Unsullied too, she will also have to face the treasonous Lord Randyll, his son Dickon, and the Tarly army he brought to sack Highgarden.