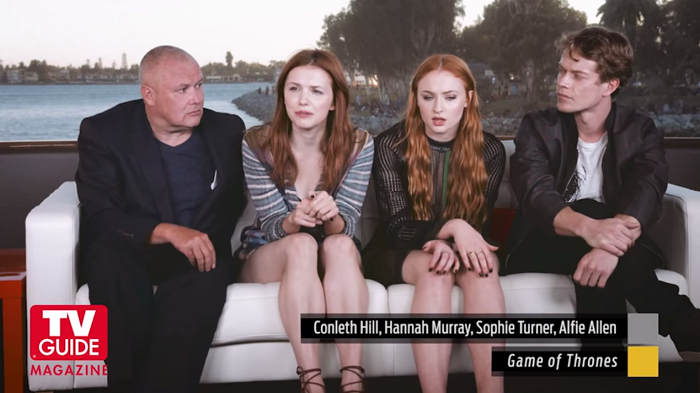 As expected, we are seeing more Game of Thrones interviews and small clues about the Season 6 schedule coming out as a result of Comic Con, including interviews from TV Guide, Entertainment Weekly, Access Hollywood and ToplessRobot.com.  Most of these are fun, short videos where we get to hear from some of the actors that we don’t get to hear from too often.

Videos and more after the jump!

TV Guide has a brief but funny interview with some of the actors at ComicCon who get less attention than others like Conleth, Hannah and Liam.  At one point, Liams tells Carice to “put it away”.  If you need a smile, this one is a must watch.

Access Hollywood talked to Liam about his being nervous at his first Comic Con.  More on topic, they did ask about Season 6.  Liam said he was expecting to get his scripts that same day and the plan was to have their first table read through this Thursday, July 16.

And finally, ToplessRobot.com has an interview with Todd McFarlane of McFarlane Toys, the maker of major league sports figures and building sets for shows like the Walking Dead.   The interview was conducted on the convention floor so the sound isn’t great but it’s a nice review of the Game of Thrones toys he is planning on releasing just in time for Christmas.  There aren’t any links on his site just yet but you can take a look at other things he has made to date.