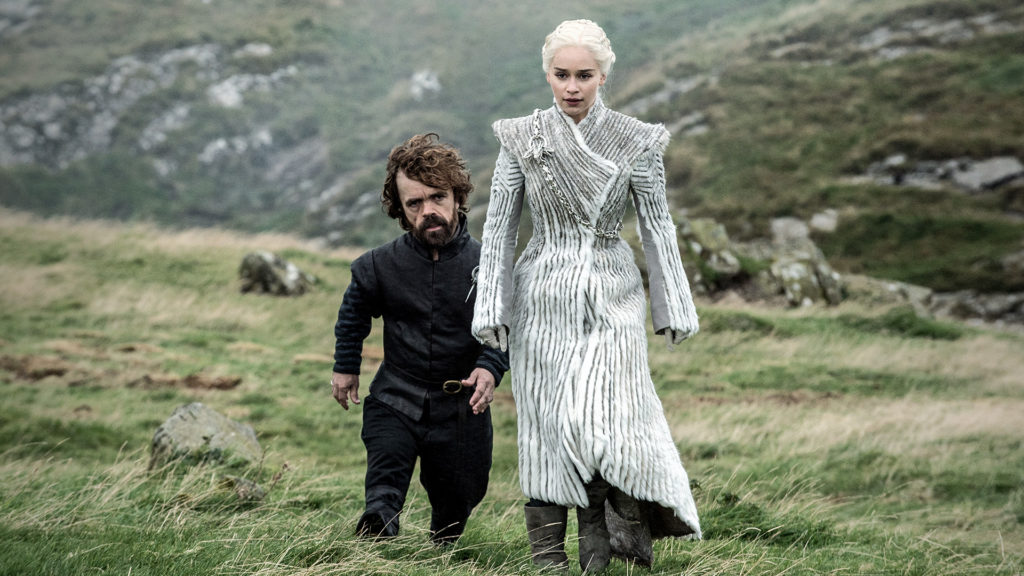 “One costume can tell you as much about someone’s journey as another character having six costumes,” Emmy-winning costume designer Michele Clapton says in a new interview in which she breaks down her thought process behind the design for Daenerys’ white fur coat. Plus, the brilliant Game of Thrones sound editing team for season 8 has been nominated for three Golden Reel Awards.

Michele Clapton recently spoke to TV Guide about her work on Game of Thrones, offering us a sample of the fascinating insights available in her book, Game of Thrones: The Costumes, which hit bookstores last month.

In the video below, Clapton specifically discusses Daenerys’ much-loved white coat, which debuted in the season 7 episode, “Beyond the Wall” when Daenerys rescues Jon and company from the White Walkers. Clapton explains that the coat design was born out of practicality, that “if she’s riding a dragon to the North, she should be warm,” but that it evolved from there to reflect Daenerys’ self-perception at that time.

“It’s the first time she’s performed a completely selfless task, because it’s usually for her own gain — and on this occasion, it was actually for her love,” she says (which I must say is an interesting take on Daenerys’ modus operandi). “So, I loved this idea, as I developed this costume, that it’s almost [as if] she sees herself as this savior, this angel. And so when she arrives and descends on this dragon, she is this sort of angel of mercy. I think it just said so much about her mental state at the time, how she saw herself.”

If you want to remind yourself how beautifully music was utilized in that particular episode (or if you just need a nice cry), enjoy this clip from Game of Thrones Live:

You can read the full list of nominees at MPSE.org. Winners will be announced at the 67th Annual Golden Reel Awards on January 19, 2020.