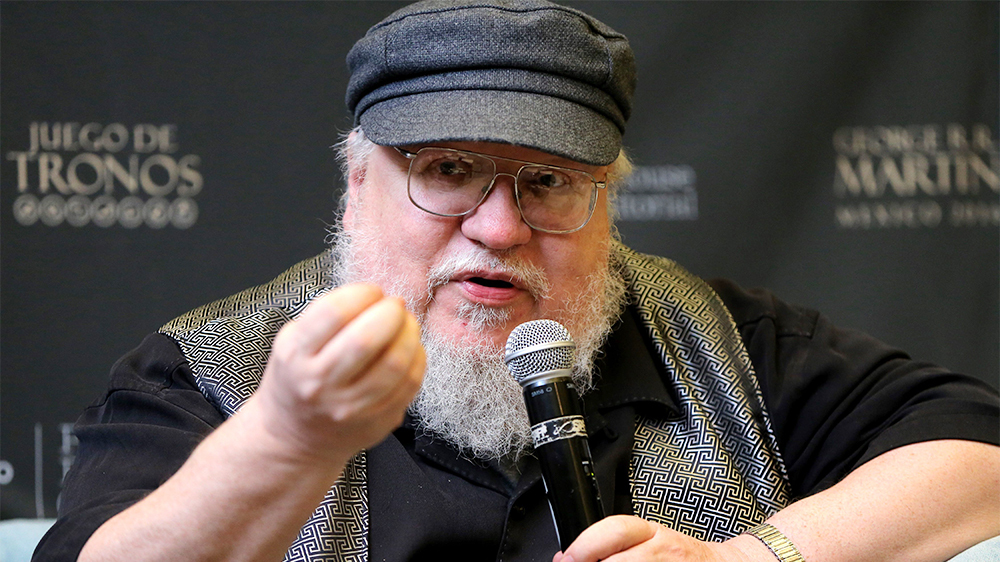 From an undisclosed location (guys, he’s really trying to concentrate on The Winds of Winter), George R.R. Martin discussed the impact of his work on fans and his plans for A Song of Ice and Fire and. In the meantime, a new excerpt from Fire & Blood has been released detailing the events of the Dance of Dragons.

Martin recently spoke with The Wall Street Journal by phone “from a remote mountain hideaway whose location he refuses to disclose” where he’s hard at work on The Winds of Winter.

Yes, yes, for all the jokes made at his expense, Martin is, indeed, set on completing A Song of Ice and Fire. Though the TV show’s timeline has eclipsed the book’s, Martin said he hasn’t let that alter his plans for his series.

“I’m still going to finish it the way I always wanted to finish it, the way it’s been in my head for 25 years now,” he said.

Martin also talked about his love of history which inspired so much of Westeros. He feels that a lot of what drew him to the subject in his youth isn’t reflected in school curriculum nowadays.

“The way history is taught today is more socioeconomic trends and things like that, which…I don’t know if it’s more valid or less valid, but it’s certainly more boring,” he said. “[I read history for] the wars and the betrayals, who stabbed who in the back, who was having an affair with whom, and to me that’s the juicy stuff of history. That’s what makes history fun.”

Martin is aware of the popularity of his work and of the impact it has on his readers … but aspects of it continue to surprise him.

“It astonishes me that today there are tens of thousands, maybe hundreds of thousands, of kids all over the world who know more about the Starks and the Lannisters than they know about the Yorks and Lancasters,” he said, referring to the warring English families that largely inspired their Westerosi counterparts.

While Martin stays in his cabin typing away on The Winds of Winter, we fans have another book of his to look forward to that’s hitting bookstores soon. And we’ve got another excerpt from it. Entertainment Weekly released a sample chapter from Fire & Blood that focuses on events from the Dance of Dragons, namely the attack on the dragon, Sunfyre, and Rhaenyra Targaryen’s successfully sack of King’s Landing.

The would-be dragonslayers easily drove off the cordon of guards who had been left to feed, serve, and protect the dragon, but Sunfyre himself proved more formidable than expected. Dragons are awkward creatures on the ground, and his torn wing left the great golden wyrm unable to take to the air. The attackers expected to find the beast near death. Instead they found him sleeping, but the clash of swords and thunder of horses soon roused him, and the first spear to strike him provoked him to fury […] The number of the dead reached threescore before the survivors fled.

[…] Amongst the slain was Walys Mooton, Lord of Maidenpool. When his body was found a fortnight later by his brother Manfryd, naught remained but charred flesh in melted armor, crawling with maggots. Yet nowhere on that field of ashes, littered with the bodies of brave men and the burned and bloated carcasses of a hundred horses, did Lord Manfryd find King Aegon’s dragon. Sunfyre was gone. Nor were there tracks, as surely there would have been had the dragon dragged himself away. Sunfyre the Golden had taken wing again, it seemed . . . but to where, no living man could say.

A Song of Ice and Fire, fire & blood, George R.R. Martin, The Winds of Winter