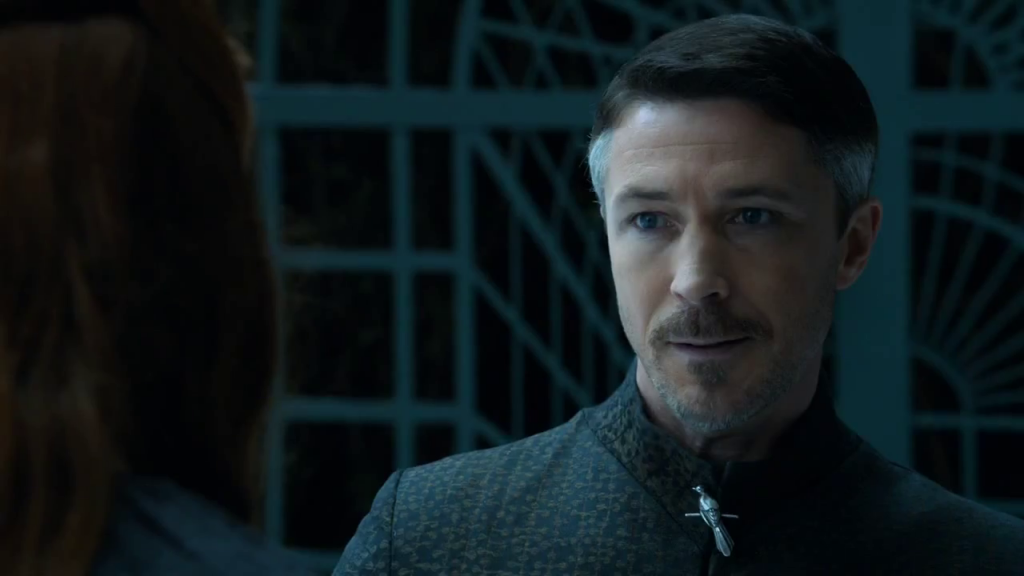 Say that you haven’t thought about it, and I’ll call your bluff.

Glad tidings to all ye great and loyal internet Watchers of ice and fire and incestuous Lannister desires, and thank you for joining us at THE great Wall of Walls.

A man’s name is Oz and it’s Yule log season as well as the off-season, which means it’s Looking Forward time once again (oft referred to as Unsullied speculation at it’s worst).

Holidays sometimes breed gifts, and this is my poor excuse for a gift to you. It’s not much, but it is all a poor boy from Flea Bottom can spare. What will the showrunners have wrapped for us at the conclusion of this epic tale? Don’t be surprised if there is a mountain of discontent, or a present without a bow… 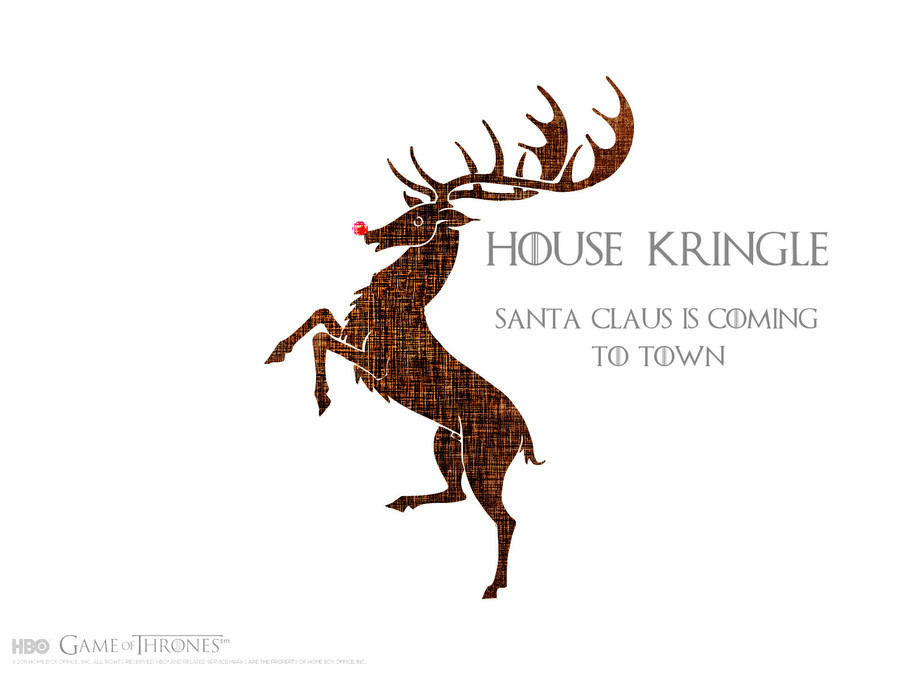 Disclaimer: For all of you Wall newbies, and as a reminder for the Wallbies: You have entered the realm of the Unsullied; where show fact and written fiction are separated by a man with only a television and a pricey, yet worthy, subscription to Home Box Office. My oath states that no books may be read until the conclusion of the show, and a man is nothing if he is not an oathkeeper.

As Unsullied, we must dine on what is served by buffet curators David and Dan only.

Disclaimer #2: Sue of House Fury does NOT allow a man to read any spoilery content produced, written and reported here at the Wall or anywhere else throughout the twines of internettery. If it seems that my misguided thoughts stem from uneducated tomfoolery, it’s because that is exactly what’s going on. The Sullied/spoiler reading contributors even have their own communication channel that yours truly was strategically left out of.

In short, I don’t read spoilers. At all.

So if spoilers are not your thing and you want to be surprised by the show when it actually airs, you have found the safe zone. Welcome to the party, pals (and yes, Die Hard is a Christmas movie).

So here’s the box score: 60 episodes in, hundreds of dead characters, a new Queen, a rising North, a fleet of dragon boats en route, a missing red woman, a disgruntled Tyrell, 4 Stark kids (well… 3), 3 wyverns, 2 procreating related lions, and a mockingbird with a goatee.

With the ending now in clear view and through many hours of contemplation, it occurred to me that there is no way, regardless of how spectacular the ending, that this tale is going to end with gratification for the masses. 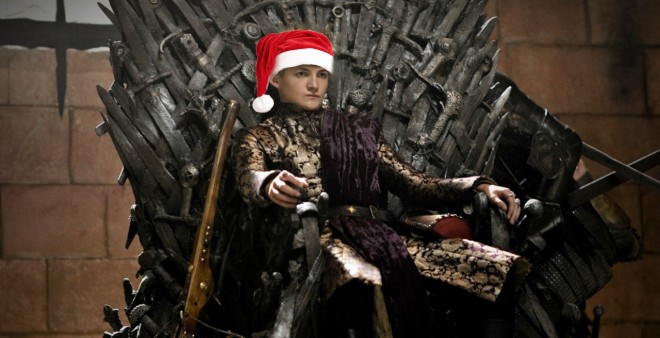 Even after the copious amounts of eliminated players, there are still far too many variables. And although the volume of characters is depleted, the combinations and possibilities of those who remain are still endless.

So jot this down somewhere so that in a year and a half you can easily locate and show proof once Season 8 concludes… most viewers likely won’t approve of the ending. It will be ridiculed and questioned and criticized. There will be loose ends (hopefully very few). D&D will be proclaimed idiots by many, and the true ending that the creator envisioned may forever remain unwritten. As George stated, it will be bittersweet. And that is a best-case scenario.

Why would Oz make this outlandish prediction, you ask? Why would one curse a show they love and adore and write about and worship?

Because sometimes you have to get out of the fantasy and step back into reality. And because historically, the majority of truly epic tales don’t facilitate the trademarked Disney ending demanded by the majority of the viewing public. 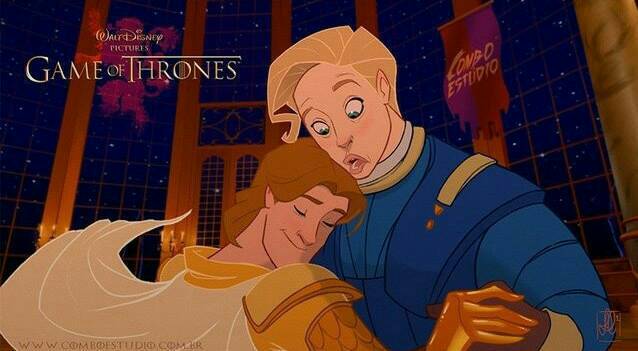 That said, here a few scenarios that would enrage many, while leaving others proclaiming “Joy to the World.” 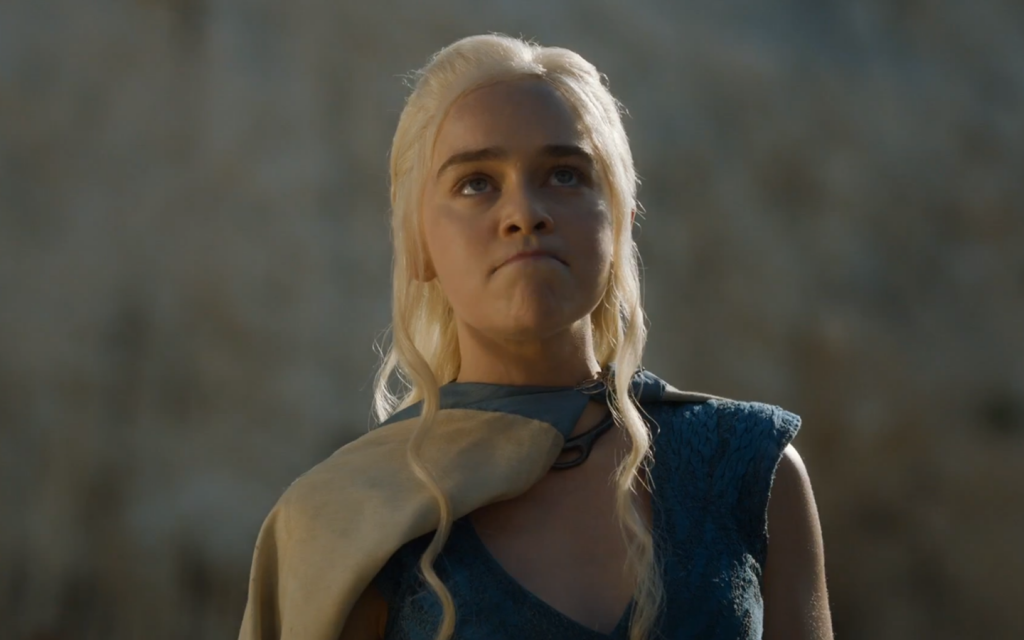 Dany completely gets her ass kicked.

Can you imagine the outrage? The woman that has been speaking of crossing the Narrow Sea for damn near 60 hours finally sets sail only to land and realize that the Westeros Bar and Grill is a pretty rough joint to go pick a fight. We saw first hand that the dragons are formidable opponents. But we also saw that they can be injured and it’s only a matter of time before at least one of Dany’s children gets the business.

Euron Greyjoy, a virtual unknown to show watchers, ends up being the biggest badass anywhere and takes the throne for himself

This scenario would blindside many. Most of the casual show viewing public that I talk to can’t even remember his name, which can be somewhat justified. Euron has only appeared in two episodes. And although his name has been mentioned in others, no one taking the scientific Oz survey really gives this guy a chance at doing anything other than possibly joining up with Cersei. That would mean that she would still be the Queen if they managed to survive the wars to come. But if Euron doesn’t mind throwing big brother off of a bridge, then he certainly wouldn’t think twice about pushing the brother lover out of a window. 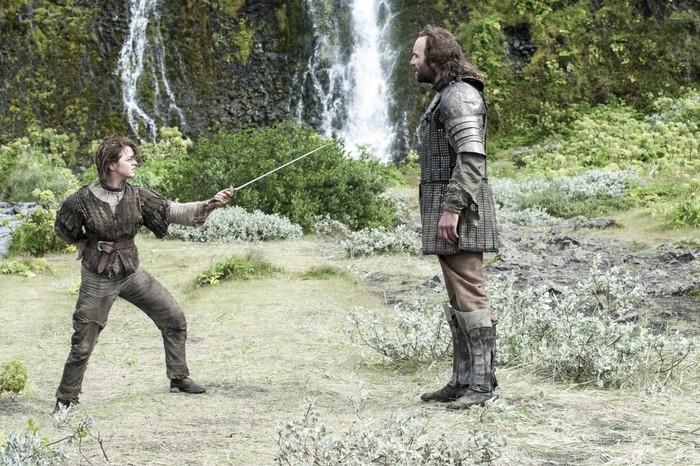 The Mountain vs. The Hound Never Happens

With the reemergence of Sandor Clegane, you have to believe that this is going to occur at some point. But it might not. If the Hound, in fact, joins the Brotherhood Without Banners as the end of S6 leads us to believe, then they are not headed south, but rather north. This would likely mean a Hound/Sansa reunion on the front lines of a white walker attack, not to mention whatever the Mountain will be dealing with in KL covering Cersei’s rear. This scenario doesn’t leave much hope for the highly touted Clegane Bowl, especially considering the number of episodes that remain. But at least the BwB is back. 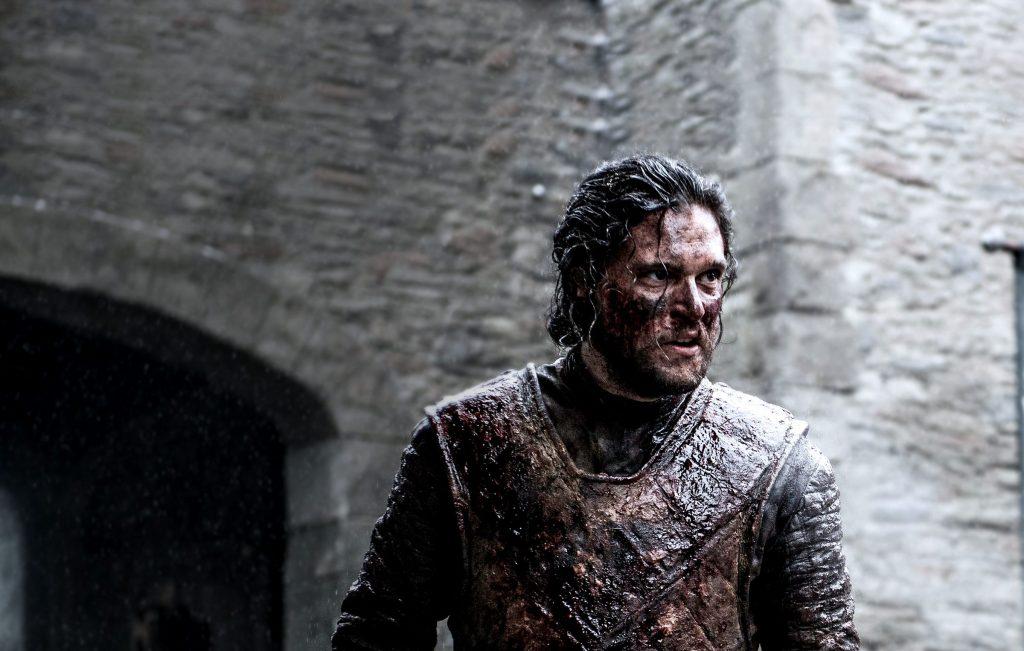 Call it unlikely if you wish, but Jon has been known to take on tasks that he doesn’t necessarily agree with at the behest of what he believes to be his half-sister Sansa (see: Battle of the Bastards). Sansa has made it clear throughout the journey that she wants to be the Queen and probably believes that she should be leading the North right now rather than the Bastard that was promised. Would she be vindictive enough to send Manbun into a trap? Maybe not. But remember who is pulling her strings… 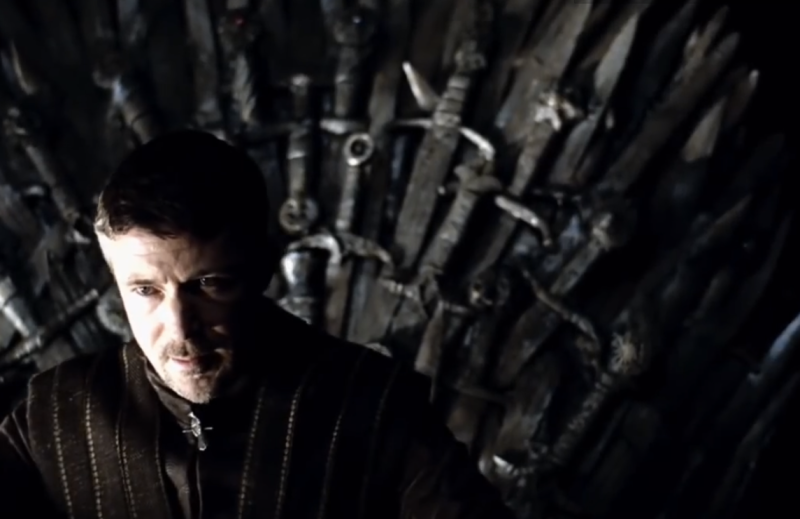 Littlefinger parlays the upcoming war of ice and fire and wins the whole fucking thing.

For the past couple of years, a man has been pretty consistent on this… what if the guy who set the whole debacle in motion somehow slithers his way onto the throne and actually accomplishes the unthinkable? Many of you have called me crazy and you would be correct. But think about it…

LF is the reason that Ramsay Bolton is no longer the Warden of the North. Jon and many others owe their lives to him and the Knights of the Vale. Baelish accomplished this by throwing my dear Lysa through a hole in the floor and then getting away with it. He wants the eldest Stark to be his bride, and again, she wants to be the Queen. He visited Winterfell as a guest of the Boltons only to turn around and help defeat the Boltons and return to Winterfell as a guest of the Starks. He also formed an alliance with the Tyrells that led to the requested demise of Joffrey. Now he has friends in the North and the South even as Olenna joins forces with the snakes and the dragons. And I’ve always believed that Varys and LF would one day meet again, because, “Chaos is a ladda.”

All things considered, Baelish finds himself in a relatively advantageous situation. Now, doesn’t that one give you the warm fuzzies? 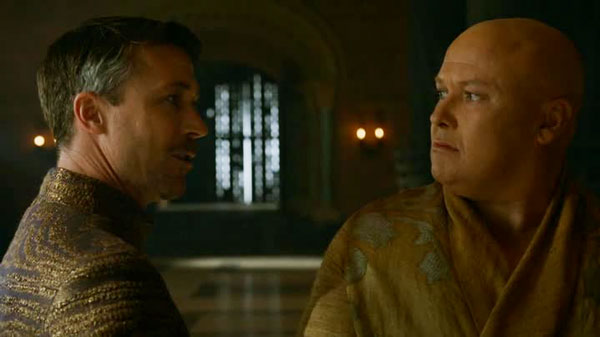 The point is this: This whole extravaganza of big budget and CGI and tales of warmth and cold is probably not going to end up like you want it to. And I would submit to you that it really doesn’t matter.

The whole point in the indulgence of an excursion is to enjoy the trip; not for necessarily reaching the pinnacle. Nobody runs a marathon and talks about what happened as they crossed the finish line. They commemorate about what happened on the road and the obstacles they had to overcome and the adventure of the journey. We should look at Game of Thrones the same way. It’s not really about how it ends, but rather what happened along the way: Hardhome; The Door; The Golden Crown; The Climb; the Bear; The Mountain and the Viper; The Old Gods and the New; The Lion and the Rose; The Laws of Gods and Men; The Gift; The Broken Man; the wildfire; and all of the epic 9’s.

To be honest, I’m content with whatever the lads and ladies at HBO serve up in the conclusion so long as the steps along the way prove solid and the show doesn’t suffer from show runner fatigue. We’ve only got a few precious minutes remaining. Don’t fret over the end; enjoy the journey, and savor each crumb of enjoyment we have left. Because, very soon…

That’s a rap for the Oz today, boys and girls. A man hopes to find all of you firmly inked in on the “nice” list this Holiday season. If not, there is always time to make a change. There is plenty of horrible shit going on in this world right now, so resolve to be different and do your part to make it better. 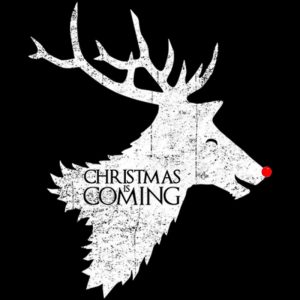 To all my Sullied friends, it’s becoming obvious that the Jolly Fat Man once AGAIN will not be bringing you a book to enjoy for Christmas. For this, you have my condolences.

Melikalikimaka to all, and to all may there be peace in your realm.

NOTE: Please do NOT post spoilers, coded or not, in the comment section. All spoiler comments will be deleted.