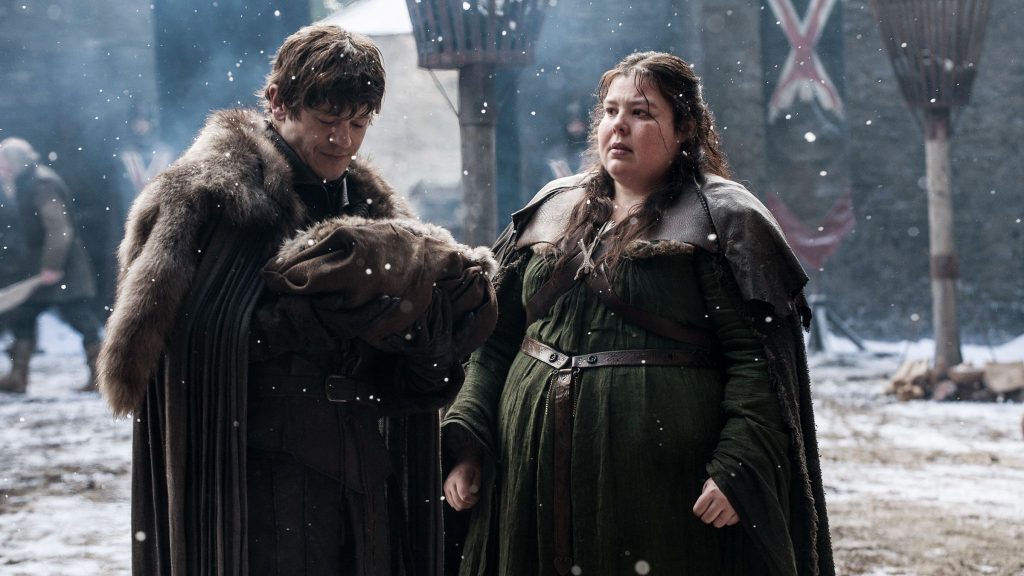 Good Lord. Do I have to write about this?

No. No, I don’t. No one threatened an unleashing of hounds or a knife in the general direction of a man’s midsection as I sit with the trusty laptop in the middle of the night.

Sick of hearing about it? Me too. But when a colleague made me aware of some new op-ed pieces thrashing Thrones for its use of violence, well, I couldn’t resist the temptation.

Feel free to skip, or come join the fun. All are given free will here, as are the people who make a conscious decision to turn the dial to HBO on Sunday nights knowing good and damn well that NO ONE is safe…

Disclaimer: I have the utmost respect for (most) opinion/editorial writers. They are either tasked by employment or by a passion for a topic enough to voice those feelings and emotions for the world to read, regardless of the repercussions associated with the gig. If they don’t already have thick skin, then it either develops quickly or they run for the hills.

However, respect doesn’t always equate to concurring. Sometimes we just have to agree to disagree. With that, allow me to retort… 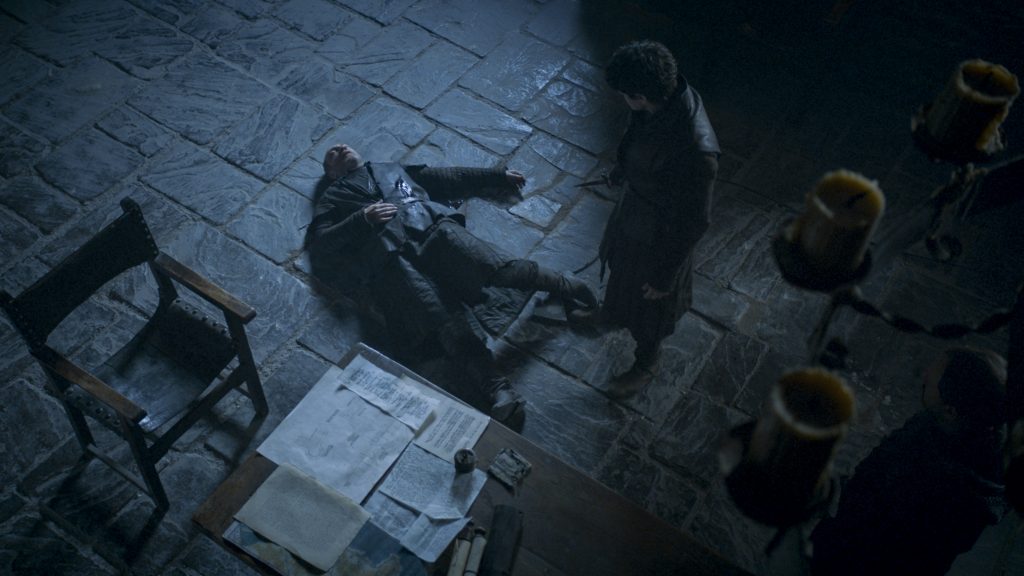 Let’s get this out of the way… I don’t watch Game of Thrones purely to attain satisfaction from observing violence. I’ll take it a step further and would venture a guess that the majority of other viewers don’t either. There are plenty of outlets to ingest gratuitous murder depicted for no good reason if that’s your thing.

I tend to avoid that type of programming altogether. And I definitely don’t need to pay HBO a monthly fee to gain access to it.

Game of Thrones tells a story. And unfortunately (for some), that story is set in a medieval fantasy world encompassing real-world type characters that are endlessly trying to survive. It’s a concept that is perplexing as much as it is dangerous, and there are many that just can’t seem to grasp it. 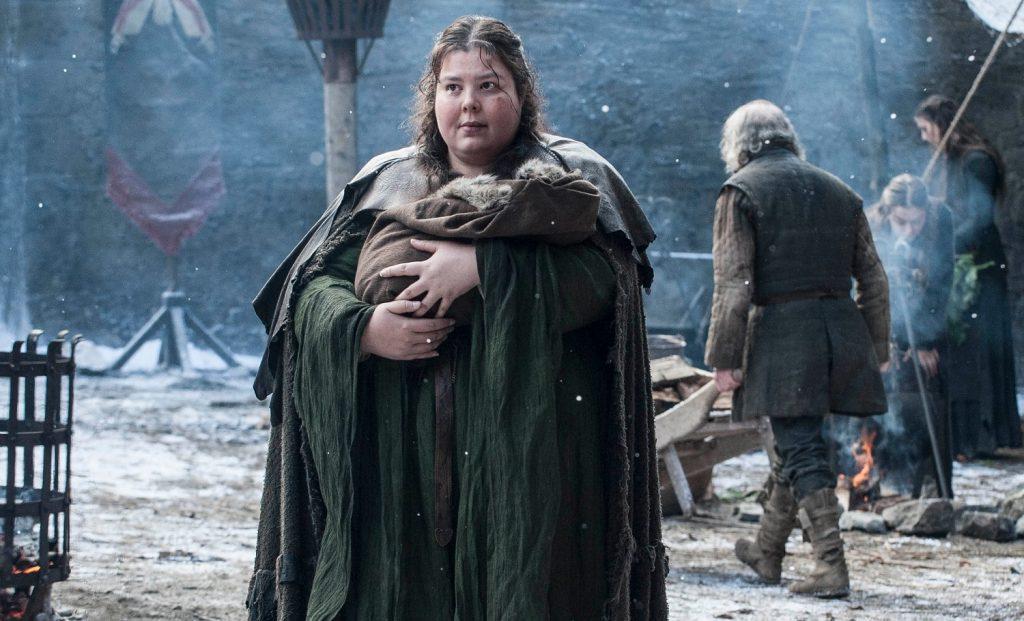 In many of these opinion pieces, the authors are quick to point out perspectives in regards to reaching “our limits” as viewers. However, the translation refers more pointedly to their own personal limits. And there is nothing remotely wrong about having personal limitations when it comes to on-screen violence and bloodshed and the ages of those involved.

When the hounds were unleashed on Walda and the baby, Ozzette promptly covered her eyes and exclaimed, “Tell me when it’s over!” I don’t blame her for that, no more than I blame others for doing the exact same thing. 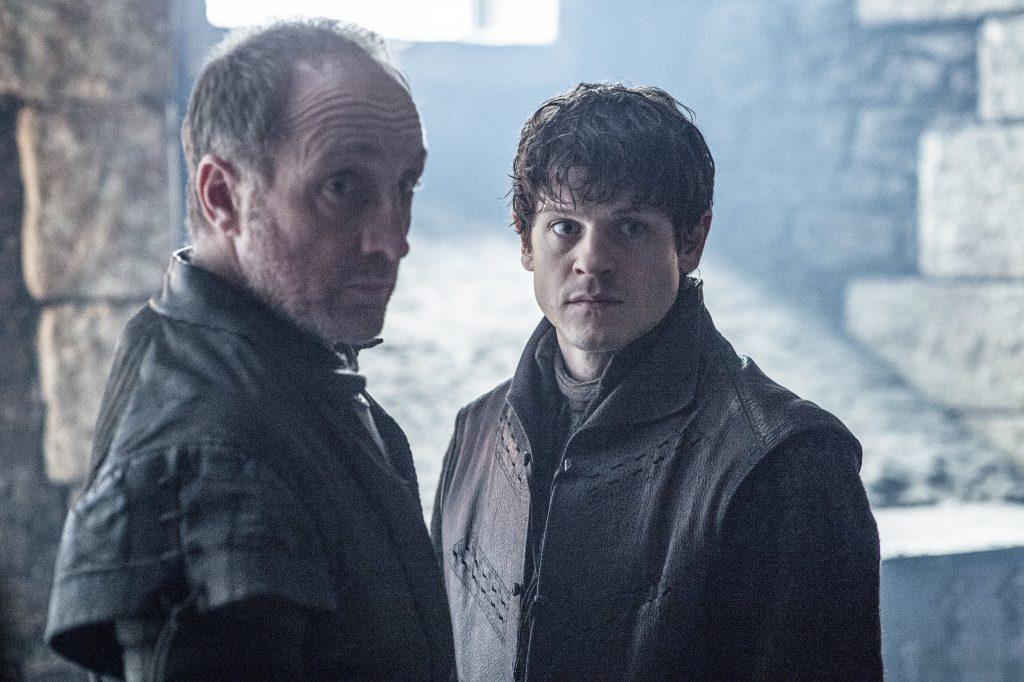 In another contradicting sentiment, that author seemed to switch gears in regards to the violence and would have been more apt to accept it had it been done in a new fashion that somehow enhanced the story.

But criticizing a scene simply because the death of someone didn’t transpire in a new and unique way is not necessarily a fair criticism, especially when the initial criticism is based on an overabundance of violence. It’s essentially saying “yeah, we knew the dogs would tear them apart and I already knew that’s what they would do and I’m bored with that so let’s do something original because the dog thing makes me uncomfortable.” 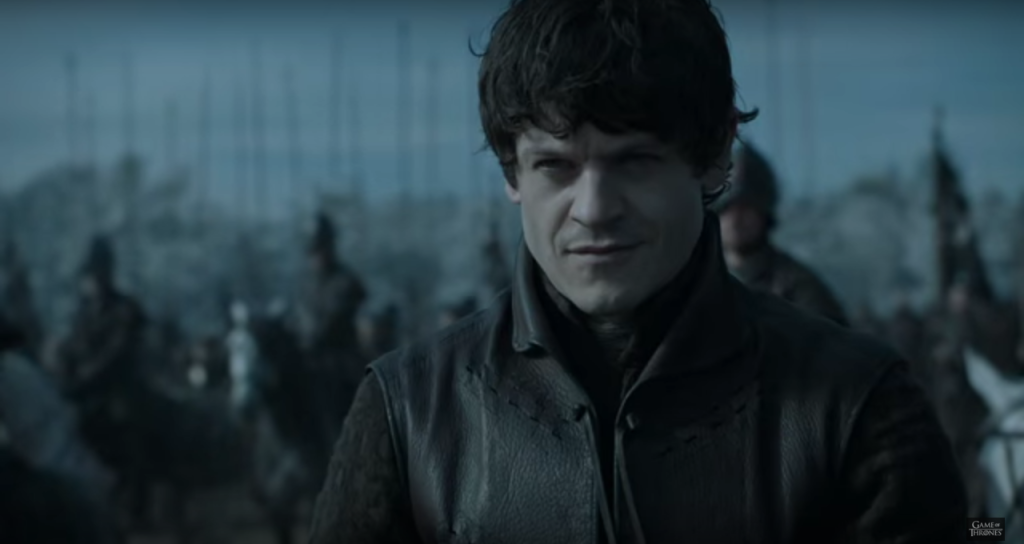 Now, is the murder-by-puppy idea somewhat redundant? Yes. This is not the first time Ramsay had dogs do his dirty work. It’s not even the second. I’d be tempted to ask “where have you been,” though I’d prefer not to come across as an ass.

When the Mountain bashes the head of “bragging schlong guy” into the brick wall, it was not overly shocking. We’ve seen him smash heads before. But when you take away guns and ammunition in a world where a large percentage of the combat is hand-to-hand, there’s only so many ways to kill a man, or a woman, or a baby. And for the Mountain, smashing heads is by and large incredibly effective. 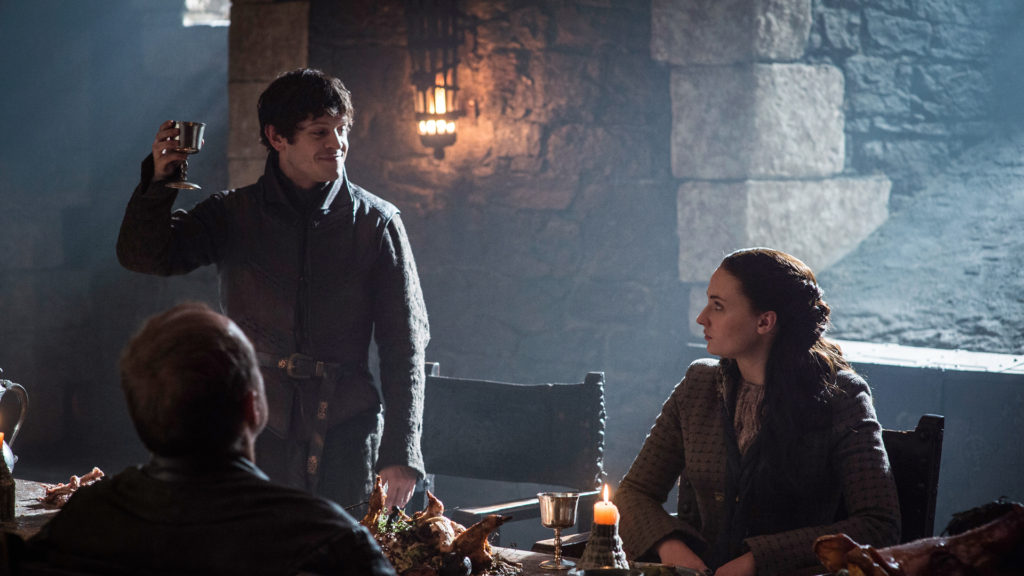 And we ARE talking about Ramsay here. Ramsay is supposed to make us uncomfortable. His whole existence is based on provoking cringe. He is self-centered and ruthless, all of which will make it that much sweeter when he meets his end. And that death, I dare say, will probably be obnoxiously violent.

But his death, as horrifying as it will be, will likely be celebrated with joy and exuberance. 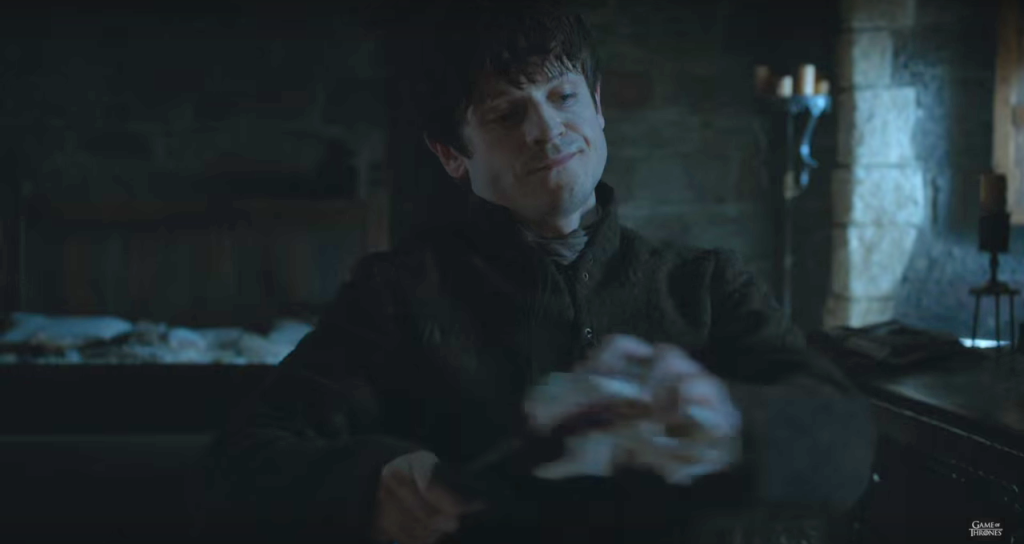 “If you think this has a happy ending, you haven’t been paying attention.”

Apparently, some of these folks haven’t been paying attention. At all. One of the pieces relating to violence in GoT that was passed my way stated that the show “violated the last sacred rule of television” with the killing of Walda’s baby.

Really? Because if that is the case, this rule had already been violated on multiple occasions by GoT alone. Remember at the beginning of S2 when all of King Robert’s bastards (save one, bless his rowing soul) were slaughtered, including a BABY? 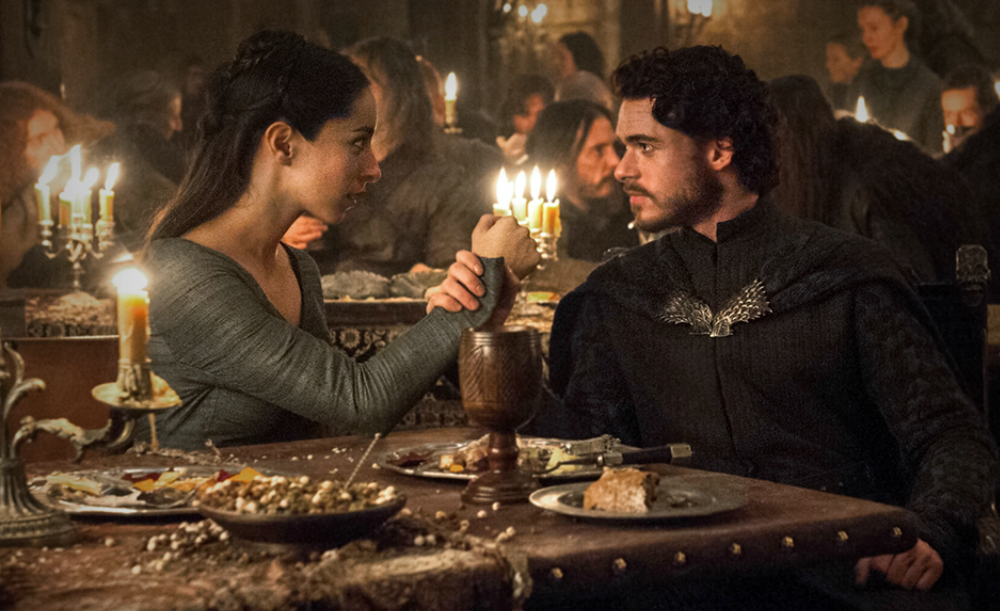 Or when Talisa’s baby was killed in utero? Wait… does that one count since you couldn’t actually see how cute and cuddly the baby was yet?

And who had Robert’s bastards killed? Joffrey. The same guy that another writer argues was a child, and that child killing in Game of Thrones is merely a thoroughfare set in place for the sake of continuing to shock its viewers. According to some of them, it’s the only reason we watch it anyway. 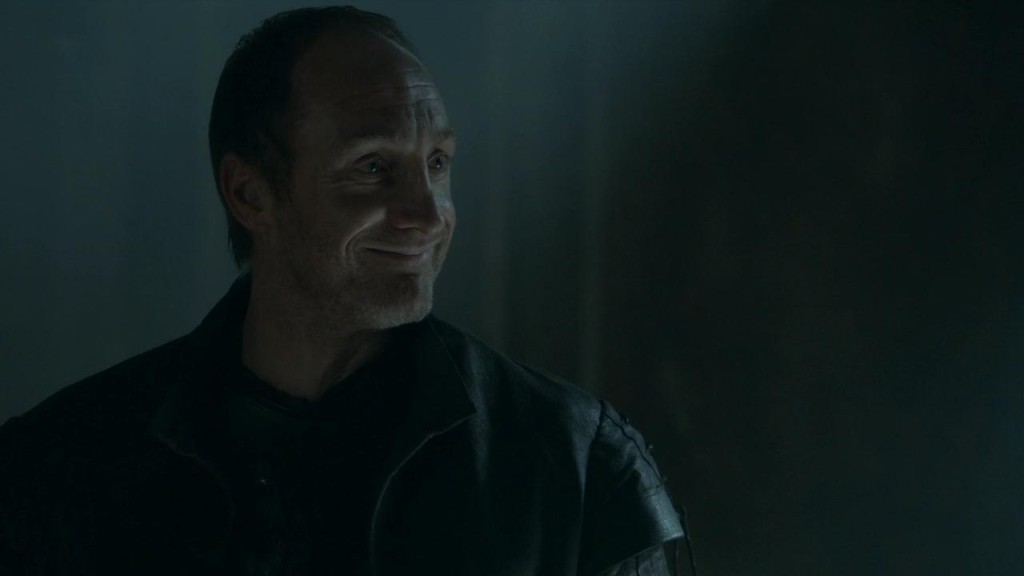 Who was responsible for the death of Talisa’s unborn? Roose. The same guy that deservedly got the business in the abdomen thanks to Ramsay. Thanks, Ramsay! Oh, but then he killed a mother and her newborn. Bad Ramsay. 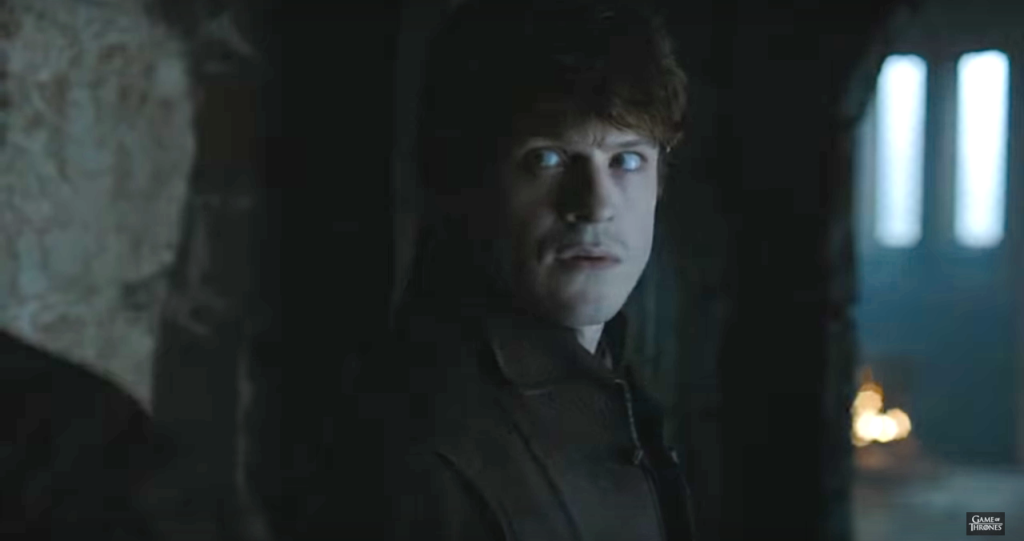 Make no mistake… Ramsay is bad. So was Roose. And so was Joffrey. But they were killing to protect their claim as an heir or for power or for the throne, all of which is of vital importance in the context of the world in which they live.

The age of the victim really had no bearing on the decision. Joffrey went after all of Robert’s bastards. Not just the young ‘uns. Roose formed an alliance with the Freys and the Lannisters to be warden of the North. In order to ensure his stronghold, he needed to kill Robb and anyone else that might hold a claim (including the unborn Ned).

What exactly did you think Ramsay was going to do? I guess he could have slipped some poison in the baby formula (if they had such a thing). Such an act would have made the death undeniably more bearable. But that’s not Ramsay. 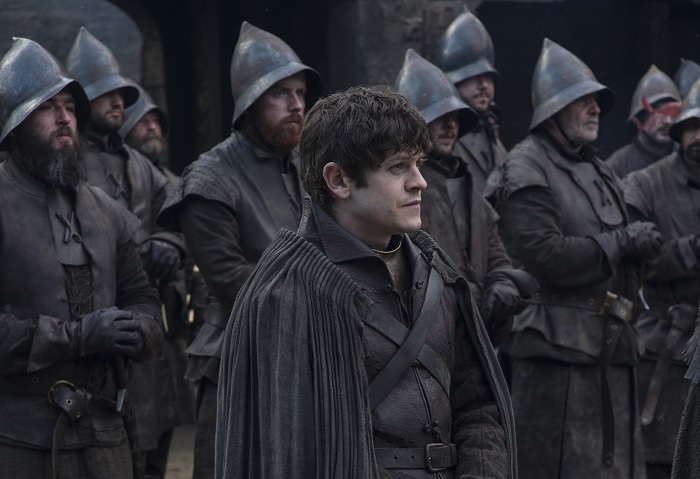 I understand that what may appear as an ongoing reiteration of the presence of violence in GoT may seem repetitious. It’s also fair to say that many of us (myself included) have simply had enough of the character and his immorally playful killing hijinks.

Does that mean that Ramsay should cease being Ramsay for the sake of those who don’t appreciate his methods or identify with his ethics or are just sick of observing his twisted antics?

He’s a character in a fantasy world that is in turmoil. And he is malicious. And every time he lets the dogs out or stabs someone or flays an old woman, the fandom grows more emotional about his character. And it’s not because they love him. It’s most likely because they can’t wait to see him die a deservedly horrible death. But even then, it’s not a quest for viewers just to simply observe violence (although my guess is that it will be brutal, so plan accordingly). It’s part of the world in which they live… the same one that Melisandre referred to as “Hell.” 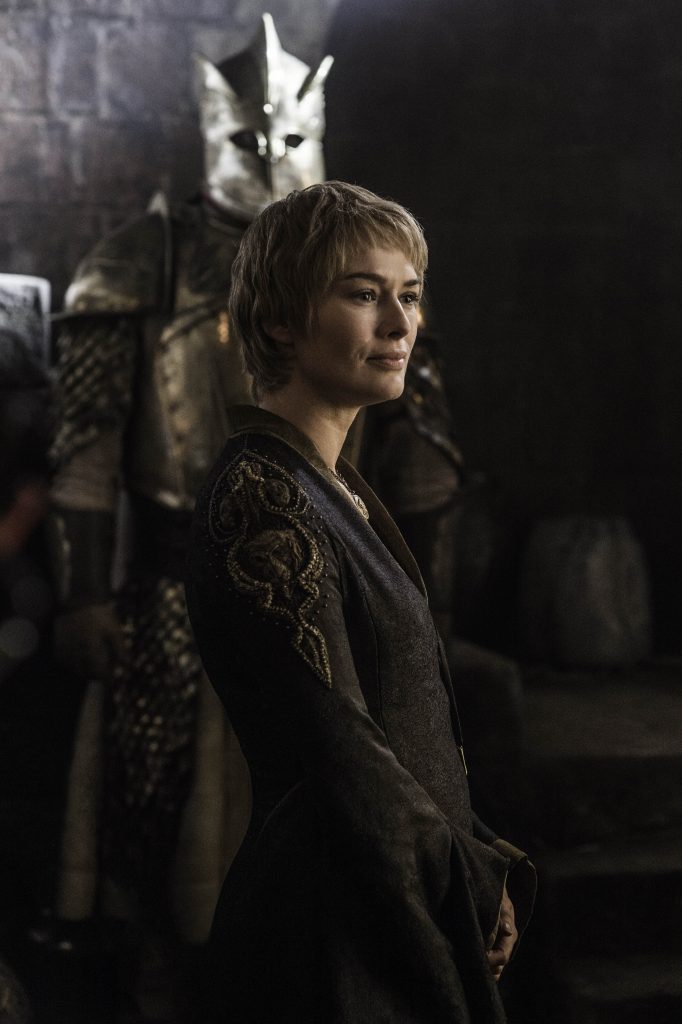 And it won’t be just him either. Cersei will indeed choose violence soon, and winter is coming. The dead are coming with it. And the dead don’t care how old you are. This is the environment, and “Breaking News:” it’s probably going to get worse before it gets better. 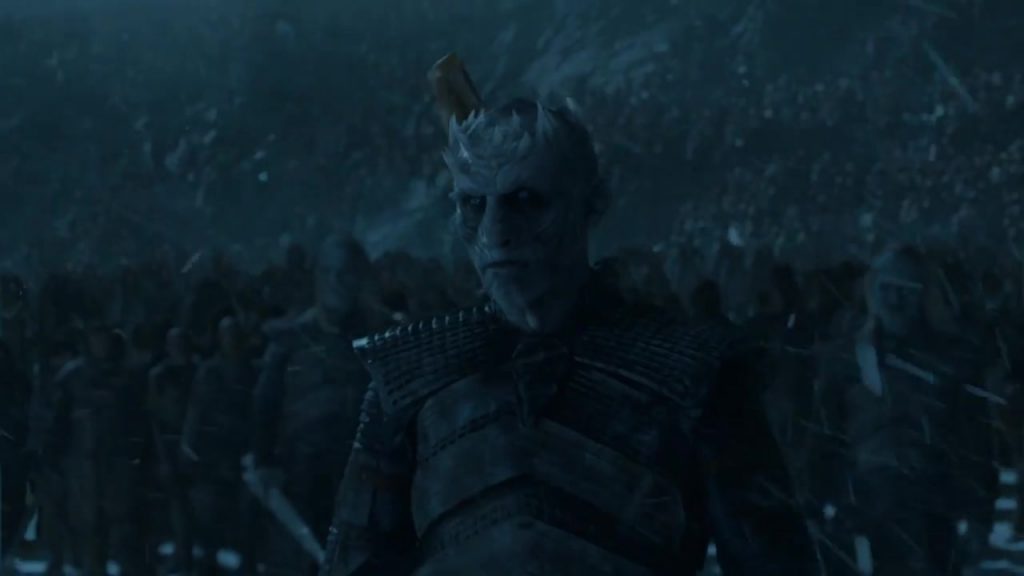 With all due respect, while those writers may believe that they are “getting the point,” the truth is that they might be missing it altogether.

Then again, maybe it’s all just for clicks.

Feel free to discuss. There are no right or wrong answers here, and I can guarantee you that a man is regularly wrong about a great many things. Differing opinions make the world go round. So be respectful of each other.

See you lovely shitheads Monday morning! And regardless of your perspective, may there always be peace in your realm…

REMINDER: This is an Unsullied post. Book and filming leak spoilers are strictly prohibited, including those using spoiler coding. Thank you!