Lena Headey and Nikolaj Coster-Waldau on the cover of TV Guide! | Watchers on the Wall | A Game of Thrones Community for Breaking News, Casting, and Commentary 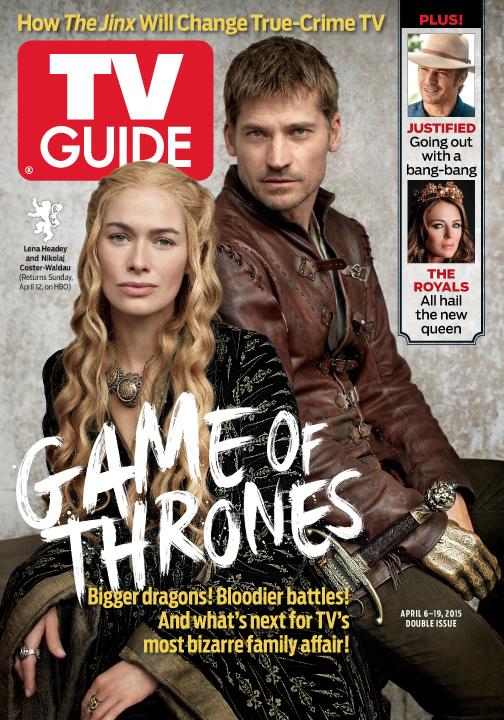 Lena Headey and Nikolaj Coster-Waldau will grace the cover of the April 6th-19th edition of TV Guide, in celebration of the fifth season premiere of Game of Thrones on April 12th. The article within contains a nice batch of quotes from the cast of the show, and a cover shoot video as a bonus.

TV Guide visited the studios in Belfast during filming last year to interview the actors and enjoyed the sight of Headey and Coster-Waldau giggling on the set of Tywin’s funeral.  David Benioff tells TV Guide, “They thought it would be really funny to make [Charles Dance] laugh, but he’s a fully committed corpse.”

The article is packed with quotes from the pair on the twins’ complicated relationship, and we also get more teases on the season to come.

Spoilers and the video from TV Guide below the cut!

Some of the highlights from the interview:

“Had Jaime known his brother was going to kill Tywin, he wouldn’t have let him go,” Nikolaj Coster-Waldau says. “Apart from the fact that he was their father, Tywin kept enemies from getting any funny ideas. Now it’s dangerous, and Cersei’s not happy with Jaime. They could use some couples therapy.”

“Cersei’s always steering. Jaime’s purer in his love,” Lena Headey says. “Last season, they slowly regained their passion. But now they’re in the worst place they’ve been in their relationship in terms of trust.”

“Jaime’s responsible for Tywin’s death, so [in his eyes] he’s also responsible for Cersei’s pain,” Coster-Waldau says, explaining Jaime’s mission this season. “He feels he has to prove something to Cersei—as well as to himself. He wants to do the right thing.”

It sounds like there could be some interesting fights in store this year. Coster-Waldau also says, “Instead of looking at his golden hand as a hindrance, he starts to see it as a weapon,”

TV Guide confirms that Jaime will “feel the wrath of Ellaria Sand” and that “she is willing to fight to the death with help from Oberyn’s warrior daughters, the Sand Snakes.”

This season, Headey says, “It’s the start of everything falling away from Cersei. Her belief in her own competence, strength, and ability to fool everybody and play the game bites her in the ass. She makes questionable choices, believing it will add to her status and control.”

As for other storylines, the executive producers offer a few tidbits.

Arya arrives in Braavos this season after catching a ship last year.  “The people there are very mysterious and philosophical,” David Benioff says. D.B. Weiss adds, “She learns there are different skills to develop beyond sword fighting.”

Daenerys has her own troubles down in Meereen. “She’s learning,” says Emilia Clarke. “She realizes she was naive to think that freeing the slaves would bring happiness all around.”

Of her dragon offspring, the actress says, “The dragons are testing her parenting skills to their limits. But she realizes she can harness their power for the greater good. It may not be good in the moment, but it will be good afterward.”

Check out this video that takes us behind the scenes of the TV Guide cover shoot with the stars.

Visit TVGuide.com to read the full article for more on Tyrion, Sansa, Jon and Game of Thrones season 5.