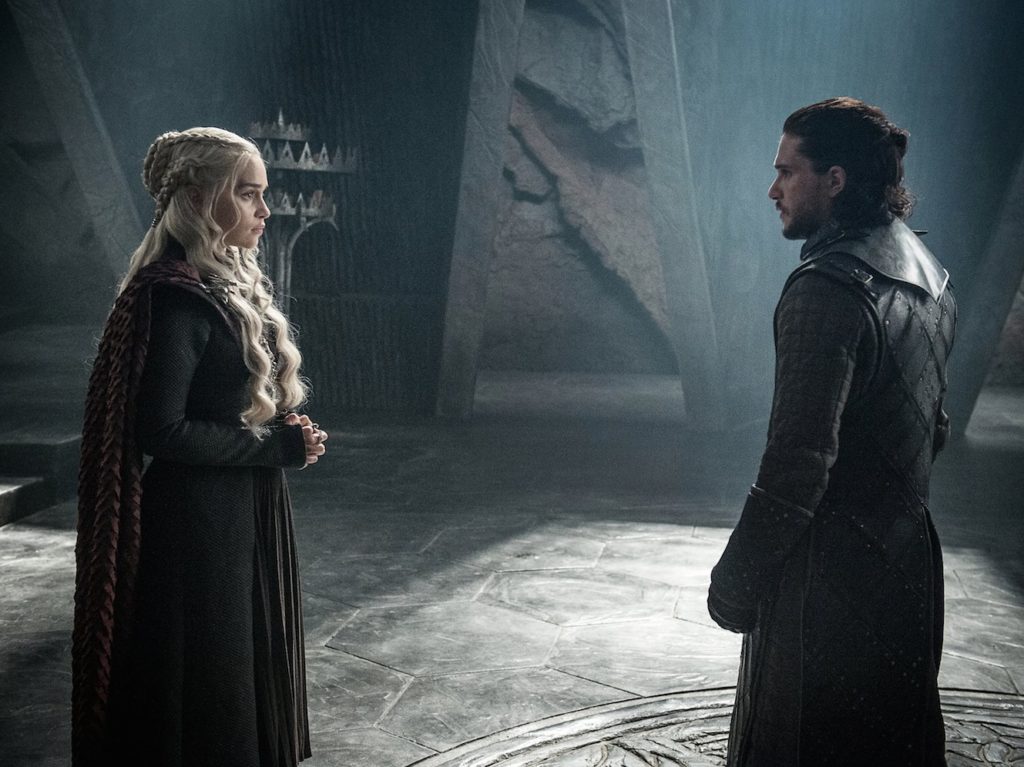 If you’ve read any of the Glass Candle Dialogues, or indeed, have listened to me talk about Game of Thrones for any length of time, then you know that Jon Snow and Daenerys Targaryen are not my favorite characters. However, as I look ahead into the Long Night that stretches forth until season 8, I have to accept that, yes, Jon and Daenerys are now the frontrunners of the show and will feature heavily in its conclusion. In coming to terms with this, I realized that I’d given into some of the small-minded, hyperbolic thinking that’s so common in fandom. I had exaggerated my qualms with Jon and Daenerys until they had become The Dullest Characters Ever Written, which … they aren’t. Not by a long shot.

Examining some Western European legends and hallmarks of the fantasy genre, Jon and Daenerys’ relatively straightforward heroism is remarkably subversive. Though they are protagonists in Game of Thrones and A Song of Ice and Fire, their superficial traits, tendencies and backstories are typically the trademarks of villains.

(I am not going to address the possibility of Mad Queen Daenerys in this article. If you’re interested to know my thoughts on that issue, you can read the piece I wrote on that very subject, read the Glass Candle Dialogue for “The Spoils of War” or buy me a beer and just … wait a few minutes.) 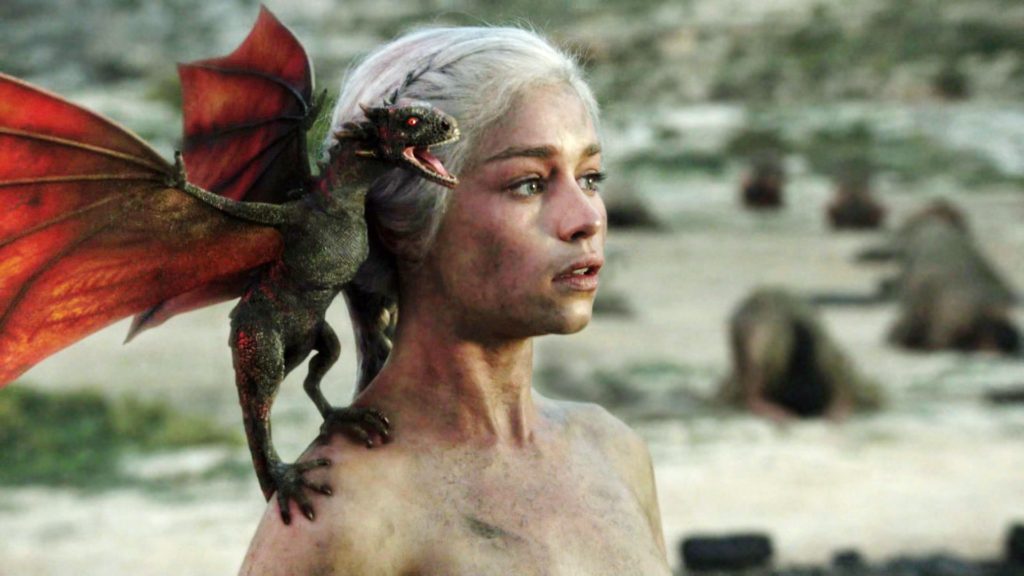 Women in Western European legends and fantasy have a complicated relationship with power. Though it would be untrue to say that these narratives always villainize women in authority – Tolkien clearly thought highly of Haleth the Hunter and Galadriel – I don’t think I’m dropping many jaws by pointing out that queens and sorceresses have a troubled legacy. We’re all familiar with stories that pit male protagonists against evil, magical queens, from The Queen of the Night in The Magic Flute to Jadis in The Chronicles of Narnia. The fact alone that Daenerys’ self-actualization is framed, for the most part, in a positive light sets her in contrast with many female characters of similar description. Yet I don’t want to overstate things. As I said, powerful, magical women aren’t always evil.

Frankly, what’s truly subversive about Daenerys, in this respect, is her sensuality or rather how her sensuality framed. There is a sexual duality to the characterization of women in authority – women in general, but powerful women especially – that borders on a virgin-whore complex in legends and fantasy. Simply put, positively framed queens and sorceresses may be married and beautiful, like Galadriel, but are unlikely to express carnal desire. Going by some artwork, it’s apparently preferable that they stare at their hands during their own wedding.

Sex drives are for reserved for bad women. Alcina in Orlando Furioso and Alcina entrances the men who land on her island and keeps them as boy toys. Calypso does something similar with Odysseus. One of the changes made to Morgan le Fay as she gradually transitioned from mystical healer of Avalon to the King Arthur’s nemesis around the 13th century (a bit of an oversimplification of her evolution but you get the idea) was a newfound penchant for extra marital affairs and a knack for seduction. So, in this light Daenerys is quite remarkable. She is a rare example of a magical, powerful woman who has both ambition and a sex drive, and the latter is not used to tarnish our perception of the former. After taking control of her own sexuality in book and season 1, she enjoys sex with her husband. In A Storm of Swords, Daenerys masturbates and accepts cunnilingus from her handmaiden, Irri. In season 5, she sleeps with Daario Naharis and, even though it’s abundantly clear that the union is consensual, it’s equally apparent that she is the dominant partner.

Yet, this isn’t meant to emasculate Daario or vilify Daenerys. The show expects us to accept that a man can feel attracted to a powerful woman for reasons other than bewitchment and that a woman’s enjoyment of sex has nothing to do with her moral character.

There may be no better symbol for Daenerys’ subversion of traditional villainy than Drogon, Rhaegal and Viserion and their relationship with their mother. The inverted dynamic between woman and dragon is played with most explicitly in ASOIAF when a self-proclaimed “hero” attempts to slay Drogon.

One man took it on himself to be a hero … The hero leapt onto his back and drove the iron spearpoint down at the base of the dragon’s long scaled neck.Dany and Drogon screamed as one – A Dance With Dragons

In the show, too, it’s worth noting how closely the shot of Jaime galloping towards Drogon in “The Spoils of War” resembles St. George charging his famous dragon but with Daenerys and Princess Sabra on the opposite sides of the conflict. 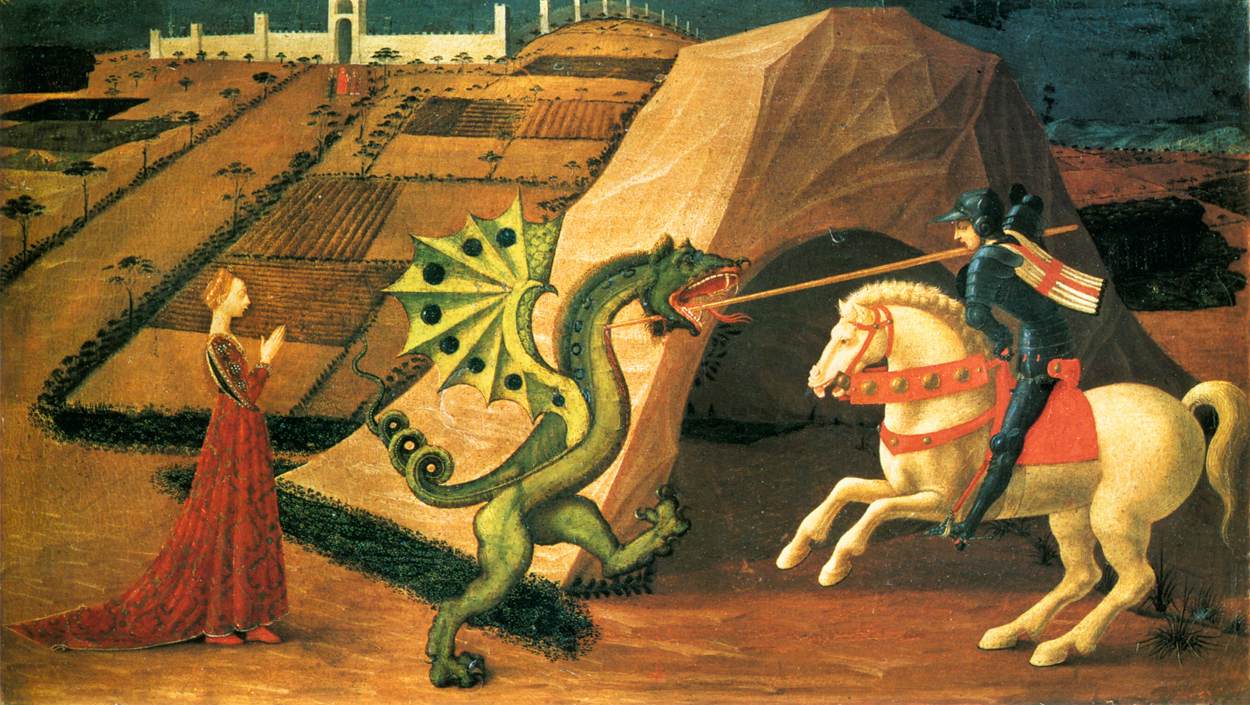 Daenerys isn’t an archetypal subversion because she bears the moniker of queen and sorceress (ok, I’m stretching a bit by calling her a sorceress, but she does have a special relationship with fire) yet exhibits none of the personality traits associated with those archetypes. She is ambitious, she can be brutal and she is sexually assertive, three things that for a very long time were the unambiguous trappings of a villainess. What’s special about Daenerys is simply that she’s written with the humanity and nuance that – surprise, surprise – female characters weren’t generally afforded in the male-dominated literary traditions that created the archetype in the first place. She is neither on a pedestal nor under foot. She’s neither a virgin nor a whore. She’s just … human. 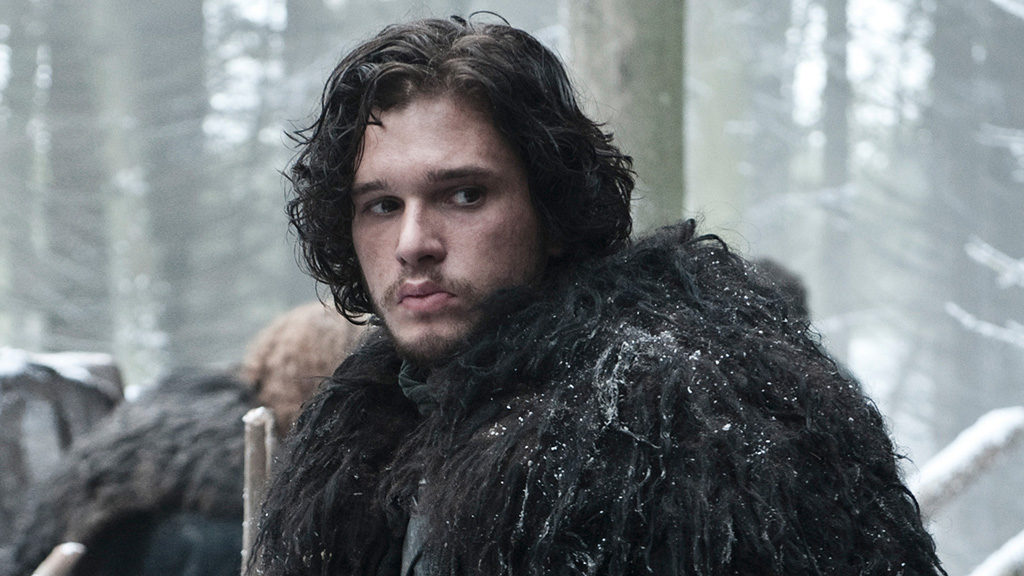 Compared to Daenerys, Jon is, perhaps, a less obvious villain subversion since he so easily fits the hero archetype, what with his special sword and his secret royal lineage. Still, it’s worth remembering that John the Bastard is the name of the baddie in Much Ado About Nothing. The first time I read A Game of Thrones and reached this description of Robb and Jon –

Jon’s eyes were a grey so dark they seemed almost black but there was little they did not see. He was of an age with Robb but they did not look alike. Jon was slender where Robb was muscular, dark where we was fair, graceful and quick where his half brother was strong and fast … they galloped off down the trail, Robb laughing and hooting, Jon silent and intent. – A Game of Thrones

– it reminded me so strongly of Marvel’s Thor and Loki that I thought Martin was setting Jon up for a tragic villain arc. Of course, my suspicions dissipated as I read on further but it is remarkable just how much of Jon’s upbringing feels like a villain backstory, being raised on the periphery of a family that wasn’t truly his own, side by side with a favored half-brother. And surely, out of context, the image of a dark-haired, black-clad man with a red-eyed wolf inspires more nefarious assumptions than benign. Then, of course, there’s his supposed illegitimate birth. Bastardy may not mean much anymore in the 21st century but, as with female sexuality, many of our archetypes and storytelling conventions remain steeped in the cultural values of long ago. Jon had every excuse to become the villain of the piece and yet he didn’t. This contrasts most starkly (you’re welcome for the pun), with Theon Greyjoy, who grew up under comparable circumstances yet failed to rise above base and petty impulses as Jon did. In most other respects, Jon admittedly fits the description of a straightforward hero quite cleanly but this only emphasizes the disparity between what we and what his world expected him to become and what he chose to do with himself instead.

While Daenerys’ subversion of her villain archetype serves as a deconstruction of the archetype itself and of the cultural biases that created it, Jon’s is more a lesson in agency. It’s a reminder that the circumstances in which we find ourselves may impact us but they do not define who we are. 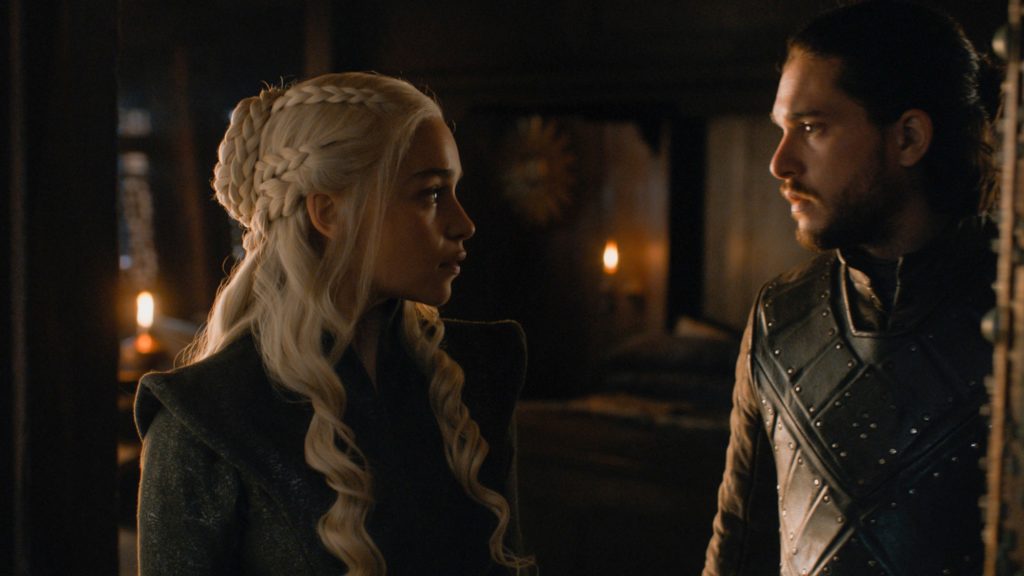 It’s difficult to address archetypal subversion when we, as a culture, are at such an introspective phase in our storytelling, where it’s no longer groundbreaking if the princess takes the romantic initiative with her prince, if the dragon is written with pathos or if the hero has a dark side. “Witches can be right, giants can be good. You decide what’s right. You decide what’s good.” That lyric from Into the Woods is thirty-one years old.

Still, Jon and Daenerys remain impressive figures who embody so much of what we’ve been conditioned to mistrust. The fact that a dragon queen and a black-clad bastard have risen through the ranks of their own world and developed into the frontrunners and fan favorites of one of the great fantasy epics of our time is pretty remarkable.