Johnnie Walker to release two new 'Game of Thrones' scotch whiskies! | Watchers on the Wall | A Game of Thrones Community for Breaking News, Casting, and Commentary 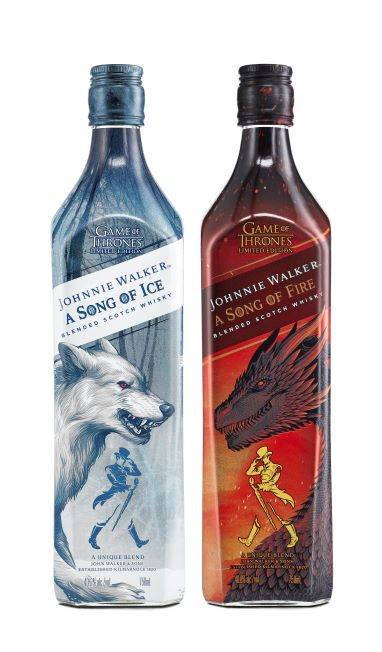 There’s something new to add to your Game of Thrones collection this August, thanks to Johnnie Walker.

You didn’t expect the Game of Thrones merch train to stop now that the series is over, did you? Not that we’re complaining — and with this most recent release, neither will memorabilia collectors and scotch connoisseurs who want to add to their liquor cabinets.

Johnnie Walker, in conjunction with HBO, will release two new scotch whiskies to the world “in honor of the enduring legacy of the critically acclaimed series,” according to a press release from the longtime scotch staple. The two limited edition blends, named A Song of Ice and A Song of Fire, are inspired by House Stark and House Targaryen, respectively, and are successors to the White Walker limited edition blend launched in 2018.

“Johnnie Walker and Game of Thrones are an epic pairing. There is as much for people to discover and explore within the world of whisky as there is within the world of the show,” said Sophie Kelly, Senior Vice President, Whiskies Diageo North America. “Each new blend brings to life a different profile of flavors — one crisp and clean, the other rich and spicy. We hope people enjoy trying both while reliving the series with friends.”

As “a nod to the complicated interactions between the two great houses in the show’s storyline,” Johnnie Walker’s iconic Striding Man logo uncharacteristically faces backwards on the A Song of Fire bottle, resulting in a face-off with the Striding Man on the A Song of Ice bottle when paired side-by-side.

A Song of Ice features single malts from Clynelish, one of Scotland’s most northern distilleries, and exudes a crisp, clean taste “like the unforgiving force of ice that shapes mountains and stops rivers,” according to the press release. The new blend has an ABV of 40.2% and the bottle design evokes an icy setting with frosted blue and gray colors inspired by the North, known for its cold winters and frozen landscapes. A Song of Fire, meanwhile, is rich and spicy, boasting flavors of subtle smoke from the peated malts of the Caol Ila distillery with an ABV of 40.8%. Inspired by the dragons of House Targaryen, feared for their fire breathing, the bottle design evokes a fiery setting with deep-red colors.

“We were very proud to partner with Johnnie Walker again to bring more whiskies to the realm. The Game of Thrones audience continues to both engage with the culture fostered around the series and look for the special collectibles that let it live on,” said Jeff Peters, Vice President, Licensing & Retail at HBO. “After seeing the excitement there was for White Walker by Johnnie Walker, we are thrilled to celebrate the end of an epic tale by offering more quality whisky for fans of the show and whisky enthusiasts to collect and enjoy.”

The new releases will both be available nationwide this August, and globally starting October 2019 wherever fine spirits are sold until supplies last.