John Bradley discusses saying goodbye to 'Game of Thrones,' the cast remembers their favorite scenes, and Kit Harington made sex scenes weird | Watchers on the Wall | A Game of Thrones Community for Breaking News, Casting, and Commentary 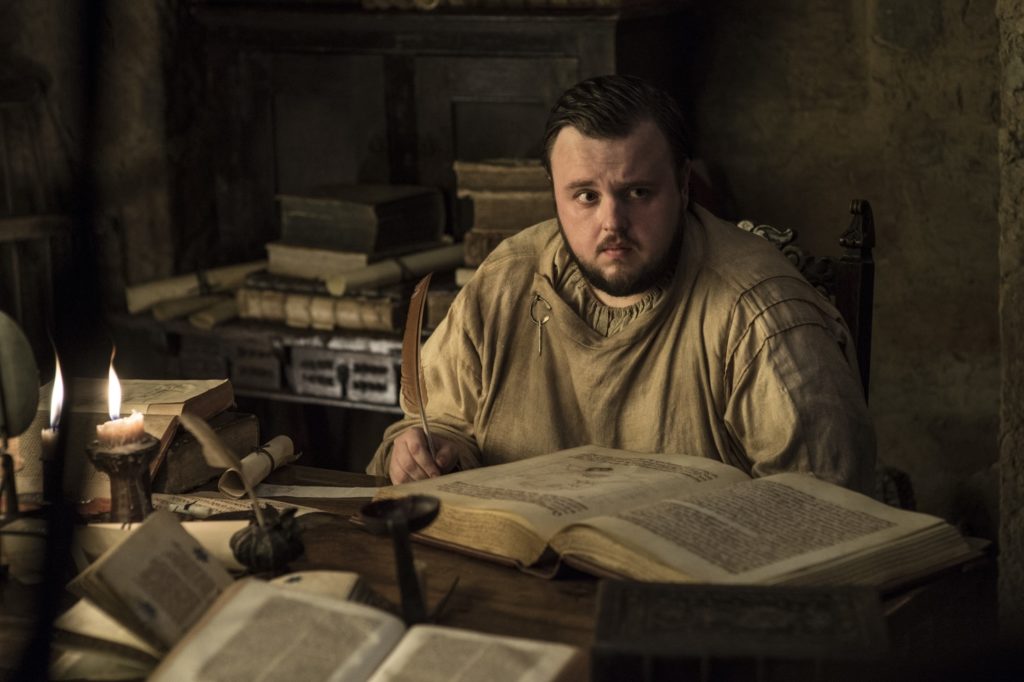 We’re almost there, everyone — just five days to go until the Season 8 premiere of Game of Thrones and the moment when we all lose our minds for six weeks. With it being so close, yet feeling so very far away, allow us to take your mind off the wait with some more Thrones news!

EW’s James Hibberd recently sat down with John Bradley (Samwell Tarly) for one of the last interviews the long-time Game of Thrones reporter and our favorite Citadel acolyte will take part in before the series comes to an end.

“If you have to inhabit a different skin for six months of every year and then you’re told you’re never going to play that part again, it’s weird,” Bradley said. “When I got to the end of his story, I got the sense I was abandoning Sam. Because every year, you grow with your character. I wish I could stay with him a bit longer.”

Bradley said that getting the scripts for Season 8 was “the start of the goodbye process,” but that he thinks “the audience is going to be delighted” with how the series ends.

“It’s never been a show that gives people exactly what they think they want,” he said. “If you asked any fan of the show going into season 3, ‘Do you want Robb Stark and Catelyn Stark to be killed at a wedding?’ They’d say, ‘No! We don’t want that, we’re behind them, we want them to succeed.’ Then it happens and we feel all those emotions and they realized that’s what we needed. … We’ve never given the audience what they want, but we give them what they need — a nutritional dramatic experience. Not just the chips and chocolate. We challenge them and hurt them too.”

Yikes…that doesn’t bode well for our favorites as we head into Season 8, but to be fair, I don’t think any of us are expecting an ending that’s not somehow hurtful.

Bradley was also part of an article from Vulture in which cast members remembered the scenes they’re most proud of, with his choice being one you might not expect: getting his ass kicked defending Gilly at Castle Black. 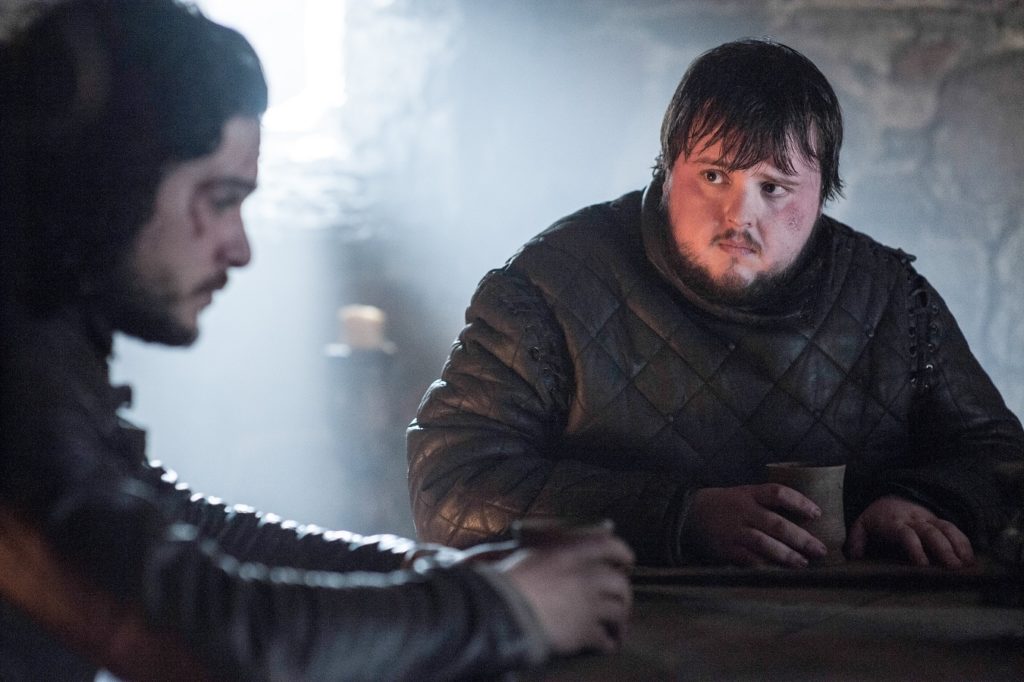 “On the show, a lot of the violence is very choreographed and quite graceful and quite balletic. There can be something quite savagely beautiful about it,” he said. “But what we tried to get in that scene, and Miguel [Sapochnik, the director] was very strong on, is this should be violence at its ugliest. Often, in fiction, violence isn’t necessarily treated with enough of a gut reaction. You can get desensitized to it. We wanted to make it look like when Sam gets beaten up, you’re seeing a human being get beaten up. People in films seem to be able to get punched 30 times and carry on like nothing’s happened! This felt like a real examination of how damaging even everyday violence can be.”

The entire article is a great read, with cast members from Emilia Clarke to Pilou Asbaek choosing their favorite scenes, and they range from surprising (Isaac Hempstead-Wright‘s favorite was when Meera Reed leaves Winterfell after a bitter goodbye to Bran) to the “Well, that makes sense” (Gwendoline Christie naming Brienne of Tarth‘s fight with the Hound as hers).

Of course, you can’t talk about Sam without talking about his best friend, Jon Snow (Kit Harington). Harington recently revealed in an interview with news.com.au that, in order to get past the awkward nature of having to film intimate scenes with Emilia Clarke (Daenerys) — the two are close friends, along with Harington’s wife Rose Leslie — he would try to lighten the mood with a prank. 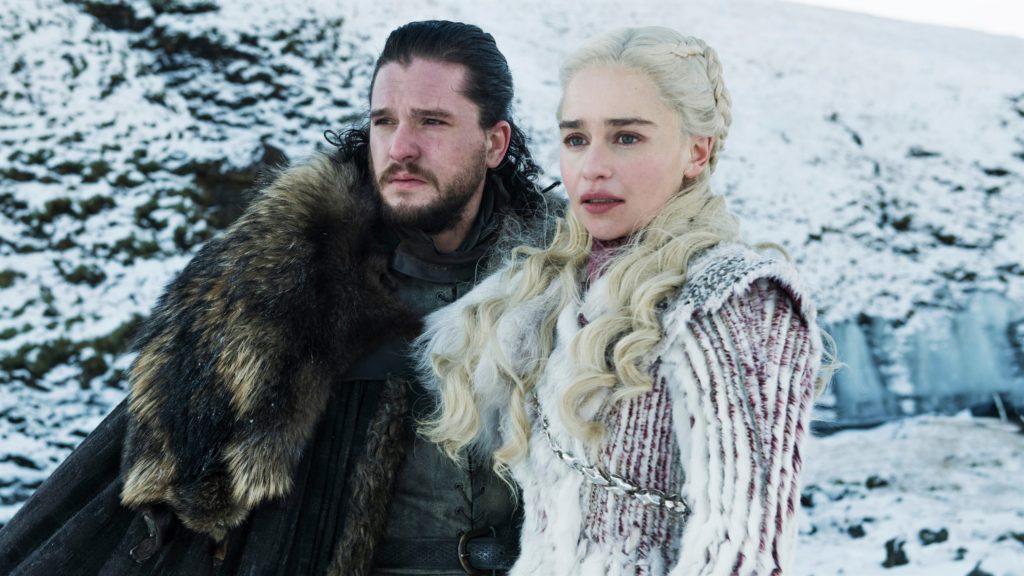 Harington as Jon Snow and Emilia Clarke as Daenerys in a promotional photo for Season 8.

“I’d pretend to throw up when we had to kiss,” Harington said. “As actors, it’s our job but there’s an element of weirdness to it when you’re having dinner, the three of you, and someone asks, ‘How was your scene today?’ But I mean, Emilia is wonderful, I love her, and I’ve loved working with her. And really, it’s not hard to have to kiss her. But I did like pretending it was.”

He also noted that getting to cut his signature long, curly Jon Snow locks after eight long years was a freeing experience that helped him move past the role for good.

“I recently cut my hair off and the hairdresser said, ‘Do you want it? Do you want to sell it?’ he said. “I said, ‘No, no, that would be weird.’ I left Jon Snow on the floor.”