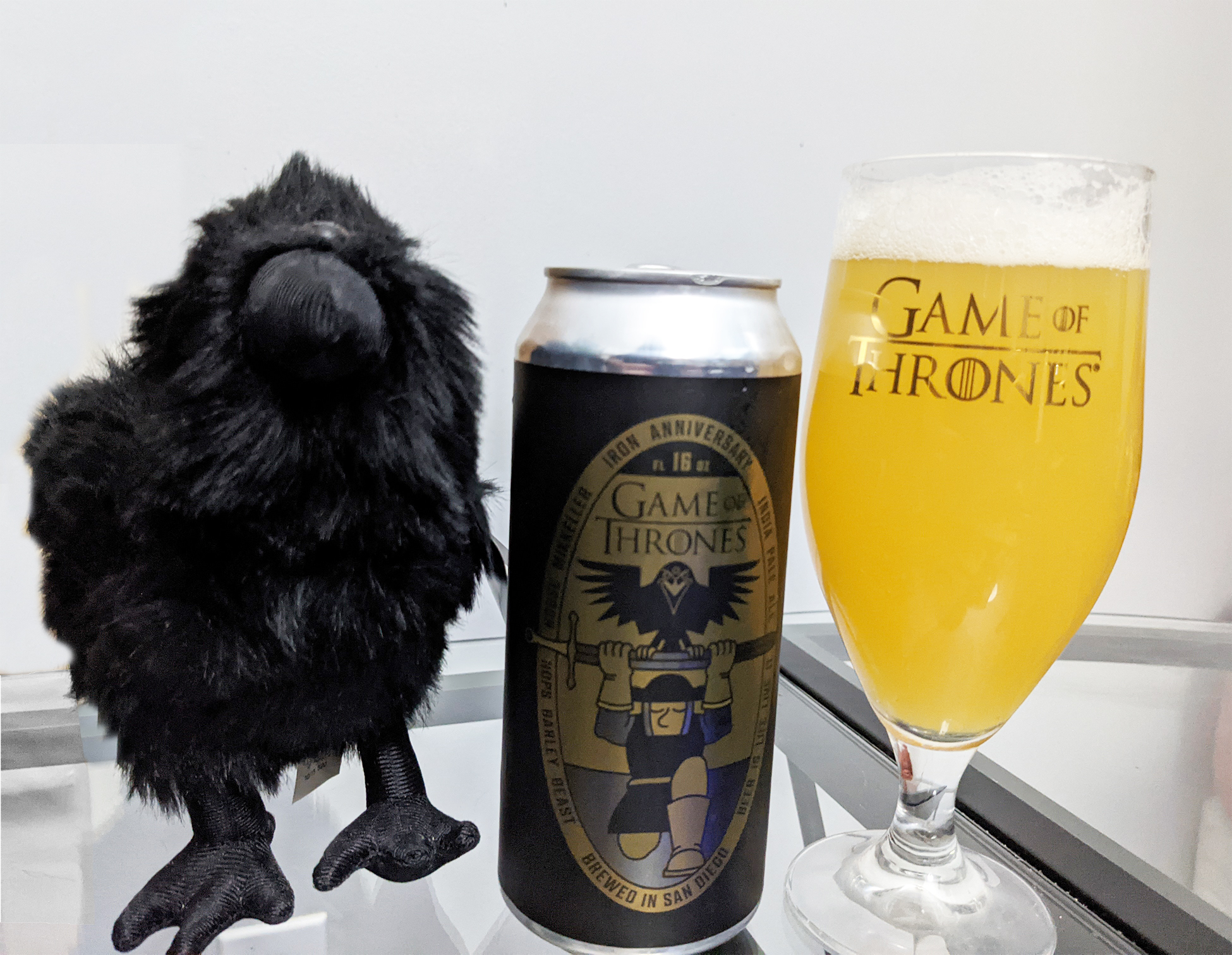 Long has the partnership between Ommegang and Game of Thrones born delicious fruit for fans with their wide array of themed beers. Well, much like HBO moving on with House of the Dragon and a barrage of other spinoffs, so too have they moved on from the New York brewery. Stepping in to take their place is Danish brewery Mikkeller launching a brand new line of Game of Thrones beers to entice longtime fans. And they’re starting out with a bang by offering a very popular type of beer wholly absent from Ommegang’s line-up: an IPA. So let’s dive in and explore this new take on themed beer with the Iron Anniversary Hazy IPA by Mikkeller.

That was one thing that struck me when my ears perked up and I heard about the new line of beer coming out-that Ommegang had not produced any IPAs for Game of Thrones. Looking back through the collection, it was primarily ales, with scattered porters, stouts, and barley wines. And while I am a massive ale fan, you look around any beer shop and you’ll see an endless sea of the wildly popular IPA style beers, especially in the craft beer sections. Although an IPA is technically an ale, the construction of the beer is very different. IPAs often contain many times the amount of hops as any other ale. They rely more on the bitter and sharp hops for flavoring than any other kind of ale, delivering a distinctive bitterness that drives some beer drinkers wild. Not myself, but this is clearly the large craft beer audience that Mikkeller is targeting with their Iron Anniversary IPA.

One of the main criticisms of IPAs as a style is that its taste is so divisive because of just how bitter they can turn out and the very strong alcohol content. You either love them or hate them, which informs why they haven’t been made into a product for HBO yet. Ales are safe and well-liked across most beer drinkers. But Mikkeller Brewery did something very clever with Iron Anniversary. In the last few years, a new style of IPA has burst onto the scene out of New England called Hazy or Juicy IPAs, which goes a long way into solving that divide. Hazy IPAs are made by adding flour, grains, fruit, and more to the traditional beer combo of hops, malt, water, and yeast. These create the hazy appearance that makes the beer opaque and the juicy flavor that comes from the fruit additives. These are attracting a lot of attention among beer drinkers by preserving the signature bitterness of the hop flavor but drawing in new consumers by adding sweet and smooth flavors as well. And that’s what we have here with Iron Anniversary.

Iron Anniversary IPA is a New England IPA. This relatively new style of beer is expressive without being too extreme, and has been much hyped among microbreweries and beer enthusiasts in recent years.

Although based in Denmark, Mikkeller’s San Diego brewery is responsible for their hazy IPA in the US. It is most definitely an IPA, and has that very pronounced bitterness that IPA fans seek. As for looks, it is definitively a hazy IPA with an opaque yellow coloring. It is not the most exaggerated bitterness though because as a hazy IPA very quickly the fruit flavors and smoothness follow. The fruit does taste strongly of citrus, either orange or grapefruit. Grapefruit is very often used in hazy IPAs because their bitter, acidic natural flavors generally pair well with the bitter IPA, and it does well here too. The smoothness that follows is also a nice surprise taking the edge off the bitter and acidic citrus before rounding out with the hops coming through again. 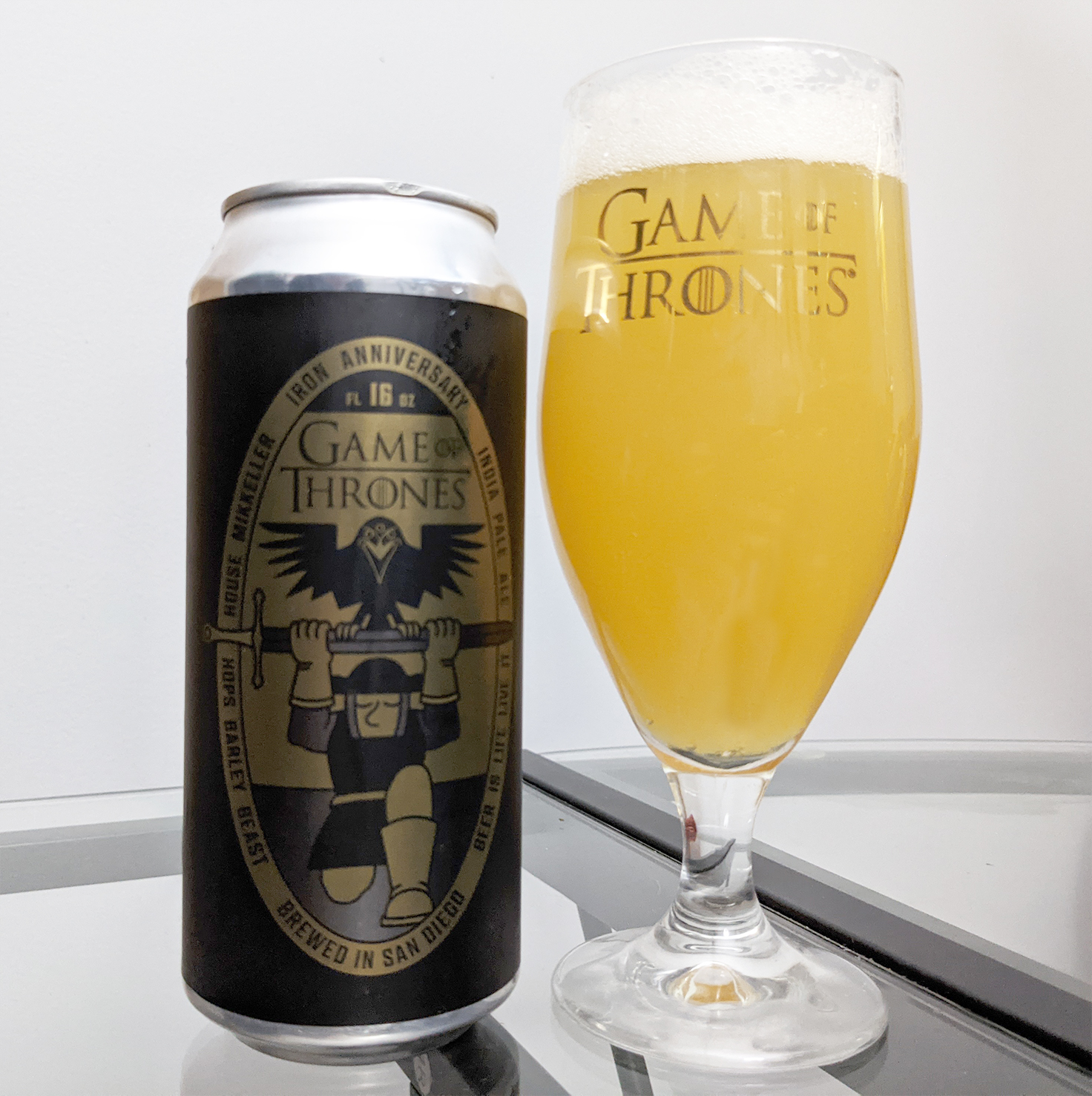 I would call this a very safe hazy IPA, where in a style of beer that is noted for extreme experimentation in flavors this is a very good standard example. Or to say another way, a great introduction to the style to then branch out from, if you enjoy it. It makes sense as the opening offering from the Mikkeller brewery hoping to entrance us fans of Westeros by producing a beer that is a solid demonstration of their abilities. It’s certainly worth giving a try if you’re already a fan of IPAs or looking to try something new.

As I mentioned before, I am not a fan of IPAs nor even hazy IPAs, as bitter is a flavor I don’t have a taste for. Still, I have tried them before and Iron Anniversary is something I can recommend that others try especially if you already love IPAs of all sorts. I personally won’t seek out more of it, but that’s because of my palate, not the quality of the beer. You could give me the best IPA in the wide world and I’ll turn up my nose. 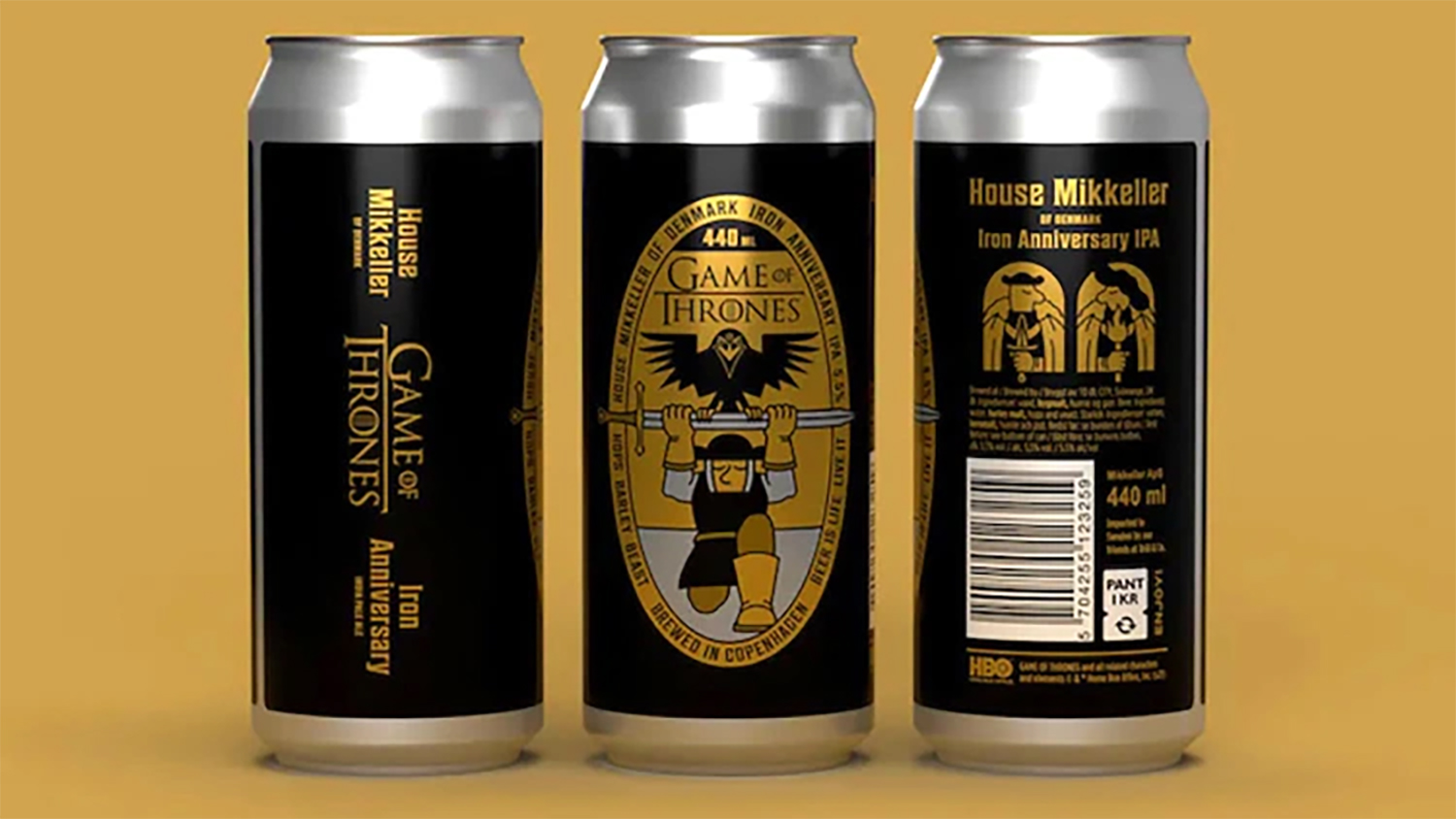 One thing to mention is that along with the quality of the Ommegang beers appealing to fans, they really leaned into making their bottles collectible. They were large, 24 oz. bottles with high-quality artwork commissioned for them, and as the series continued they started changing the styles. Ommegang started off with a simple brown bottle and sticker before changing things up drastically for the Royal Reserve Collection’s blacked-out bottles and distinctive colored wraps of red, yellow, grey, and blue.

Mikkeller’s offering is very different, coming in 16 oz. silver cans wrapped in a black label with the distinctive gold coloring of Game of Thrones’ title. The artwork is different, but still appealing with Mikkeller’s mascots and artwork being blended with Thrones imagery including a sword and a three-eyed raven on it. They even used a type of hops called “styrian dragon” which I’m sure was used for its quality as a dry hop but also to reinforce the general Thrones-iness of the product.

However, it does make them feel less collectible overall as the plain silver tallboy and black sticker come off as less impressive than Ommegang’s large glass bottles and elaborate artwork. I will note that Mikkeller does make those same kinds of large glass bottles as well, but did not use them for this initial offering. We’ll have to see how future Mikkeller collaborations turn out as they have promised more over the next few years.

You can find Iron Anniversary by Mikkeller Brewery at local stores near you, or in their webshop.

Note: the author was provided a free sample by Mikkeller for this review.