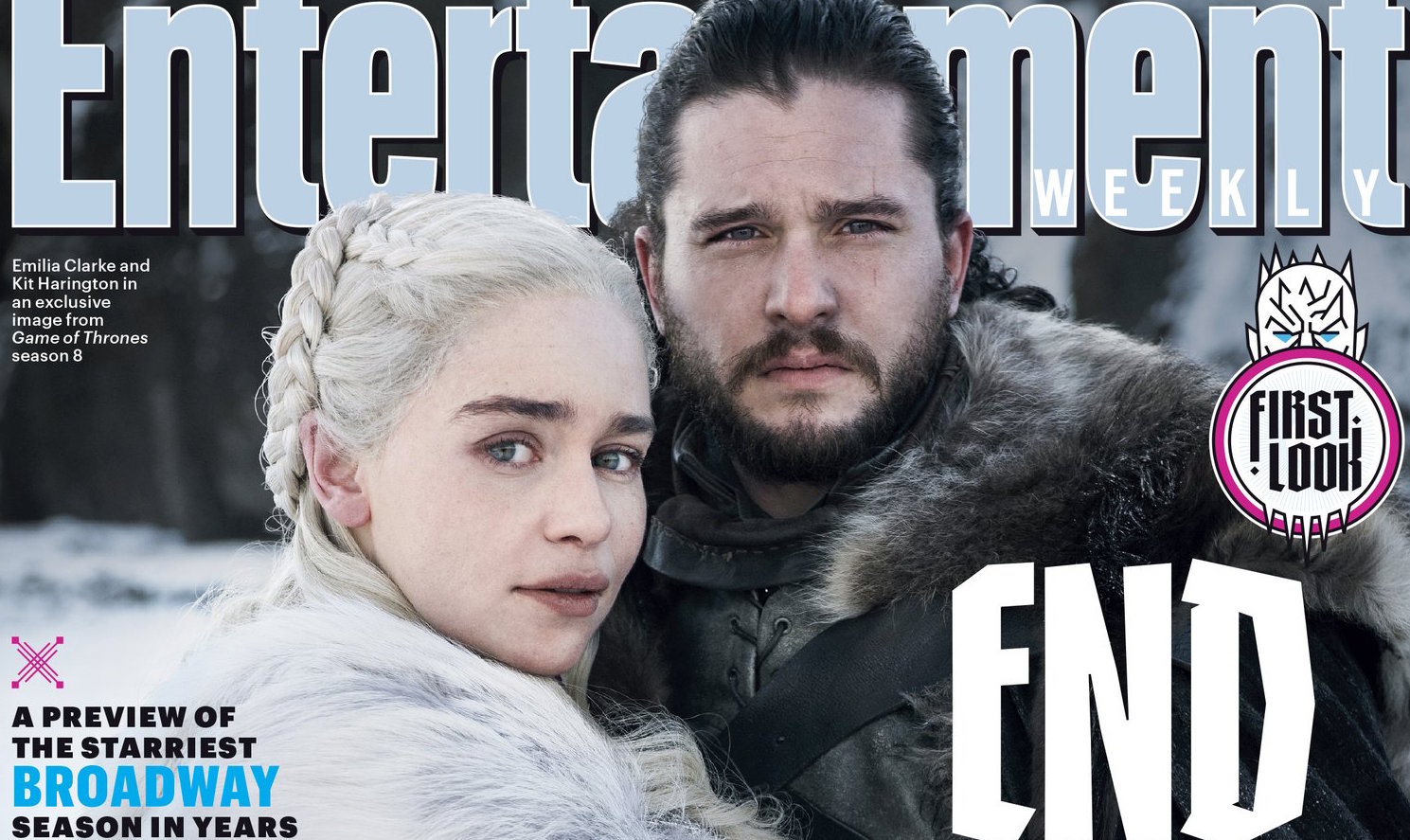 EW‘s cover story last month gave us an inside look into the final Game of Thrones season through the eyes of James Hibberd, but it appears that report wasn’t enough for him and so he’s decided to reveal even more about his final set visits. Among his teases, there’s the possibility that a first trailer for the final season could be coming soon!

EW’s Game of Thrones Weekly podcast, in which typically James Hibberd and Darren Franich review the latest episode as a new season airs, just released a special episode. Hibberd retreads some of the same ground of his cover story, but with new, juicy details.

“They spent 10 months filming six episodes of television, which would normally take about two months. That’s pretty crazy. And a lot of that wasn’t the big battle stuff, but the regular scenes of two people talking in a hallway,” he clarifies. “If it’s a scene that would normally take a day to shoot, they’d spend several days shooting, because they’re trying to so hard to get every little thing right. So they’d do take after take, from all sorts of different angles, so that in editing they have different ways to piece it together.”

“But the battle is the big sexy thing,” Hibberd concedes. “It’s shaping up to be what probably almost certainly is the longest consecutive battle sequence in cinema history. They’ve looked to try and find other ones out there, like [the one in] The Two Towers, in The Lords of the Rings, which is about 40 minutes, and in the movie 13 Assassins, which was also around 40 minutes. This is going to be longer than 40 minutes. It’s pretty nuts.”

This battle, which naturally takes place in Winterfell, called for a much grander Stark castle than we’ve ever seen. According to Hibberd, the crew was up to the challenge:

“They massively expanded the Winterfell set. You can wander around, point the camera at any direction and it shows more Winterfell. One of the directors pointed out that even in a big budget Marvel or Star Wars movie, they usually only build what the actors are gonna stand directly in front of and fill in the rest with green screen. But for this set, and a few others too, they built it as a 360º set, so you don’t have to fill it in with special effects; you don’t have to favor one particular angle; you can have cameras follow people around; you can do unusual angles and come up with different things on the day of shooting. So it allows a lot more creativity, and it helps the actors. No acting required. They’re running around these sets, fighting, with fake blood on the snow, snow flying everywhere, torches burning, fires and smoke; it feels like you’re right there.”

That said, Hibberd saw much more than grand spectacle: “There’s been so much focus on the ‘spectacularness’ of the battles, but they’re not skimping on the one-on-one scenes and the character scenes. I think people are going to be surprised about how intimate the final season is, in addition to the spectacular stuff that you’re expecting.”

“What you want in any final season is things to be unexpected but also make sense,” he concludes. “So you don’t want anything to surprise you for surprise’s sake. You want everything to feel earned and to look back and go ‘okay, yeah, I could see how they were building to that.’ And from that I know from the final season, it does that.”

Hibberd also discusses the emotional table read, which was thoroughly covered in the original report (though he adds, speculatively, that it might have been filmed for a future Blu-Ray extra or the like), as well as the heightened security on set, and the anxiety his secret season eight knowledge is causing him, a feeling he describes as “carrying around the pop culture nuclear codes in your head.” This results in a hilarious tangent about a session Hibberd had with a therapist who just so happened to be a Game of Thrones fan. You can imagine how that went. Or better yet, listen to the episode!

Finally, Hibberd theorizes a trailer may be coming quite soon, which might have something to do with an interview he just published with Deadwood producer Carolyn Strauss, who isn’t only producing the exciting Deadwood film but also Game of Thrones:

“The new season is looking fantastic. It’s really kind of staggering in its accomplishment — and we still have a lot of work to do on those as well,” Strauss says.

When asked about when we can expect a full trailer for the final season, she says “I gotta believe something is going to come out before too long.”