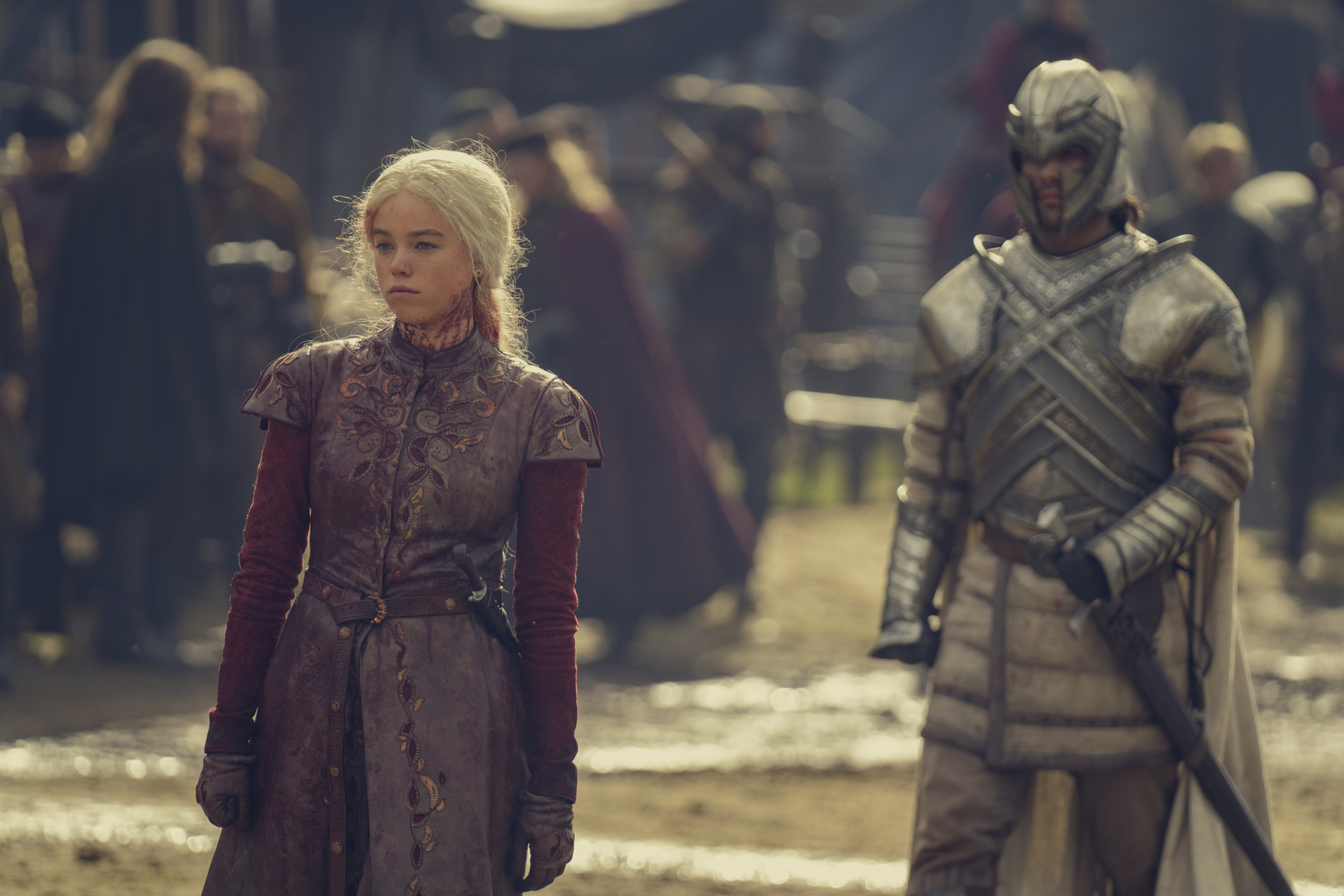 Who’s up for a seafood boil? I’m feeling peckish for some reason.

Spoiler note: This recap will spoil the heck out of the latest episode of House of the Dragon, but doesn’t allude to any future events.

Welcome back to the grossest war ever! Corlys and Daemon’s fight against the Crabfeeder in the Stepstones isn’t going so well (how does the dude with a dragon get beat up by the crab guy with greyscale…but I digress). The dragons (human and beast) show a weakness for arrows, and lose a skirmish with Craghas Drahar before escaping with their lives.

In mainland Westeros, we get properly caught up- two years have past since the last episode, Alicent the new queen has given birth to a baby boy named Aegon, is very pregnant with another and there’s a Lannister named Tyland (Jefferson Hall) in town working with the Small Council. Rhaenyra is still righteously pissed off about everything, as she has right to be, and also who wants to go to a toddler’s birthday party anyway? They’re honestly the worst. 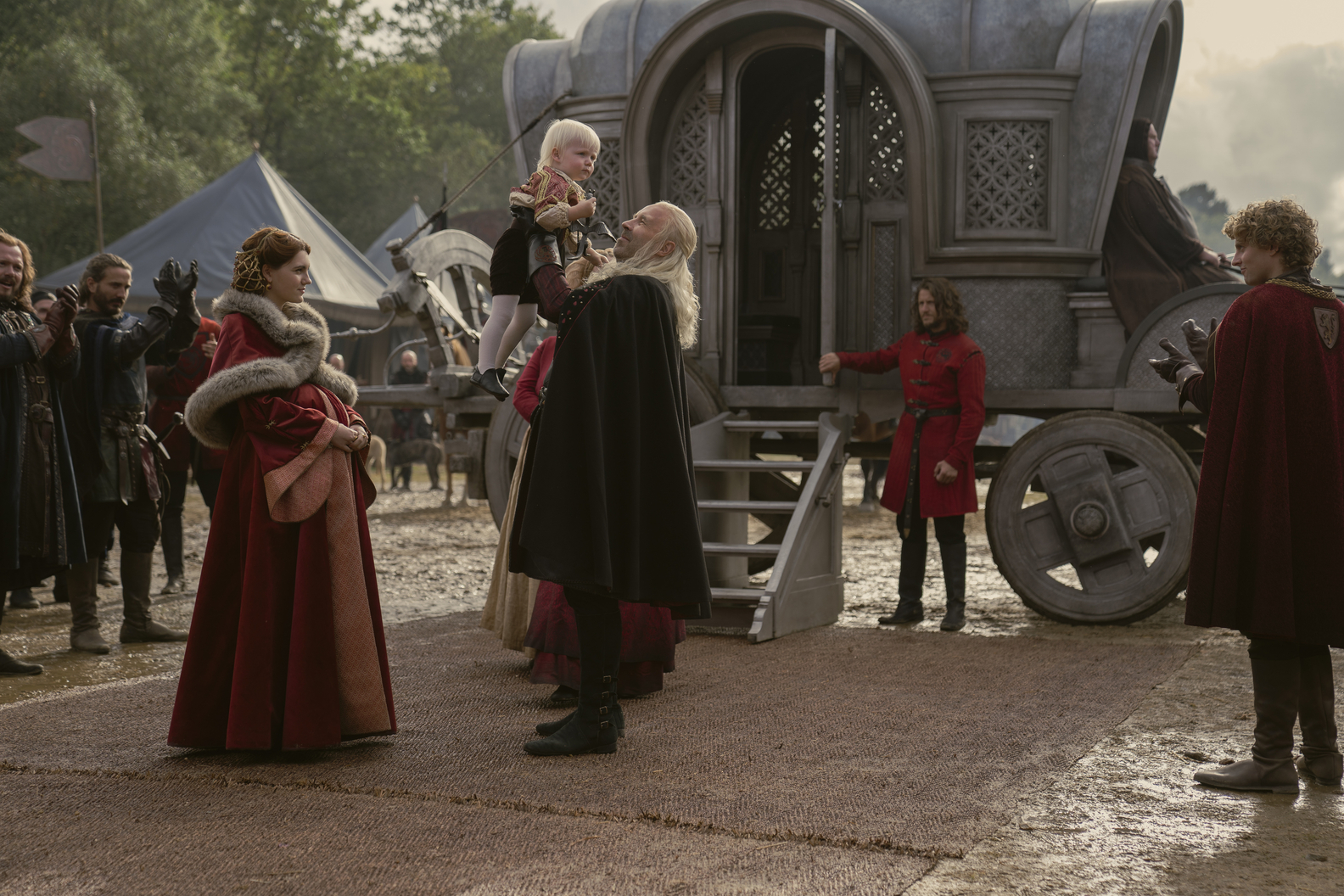 Viserys orders Rhaenyra into happy fun family times, a royal hunting trip because those always end well. He slips in some “start thinking about marriage” hints because that’s where this is all headed.

As the Targs ride into the hunting grounds, House Strong makes it debut en force. Papa Lyonel is joined by his two sons, Larys (Matthew Needham) and Harwin (Ryan Corr). Immediately after that you realize that that Lannister guy from earlier has a clone- that’s right, Tyland has a twin brother, also played by Hall. All the families welcome the baby enthusiastically while Rhae sulks a bit. (She’s a teenager, she’s entitled to it.) 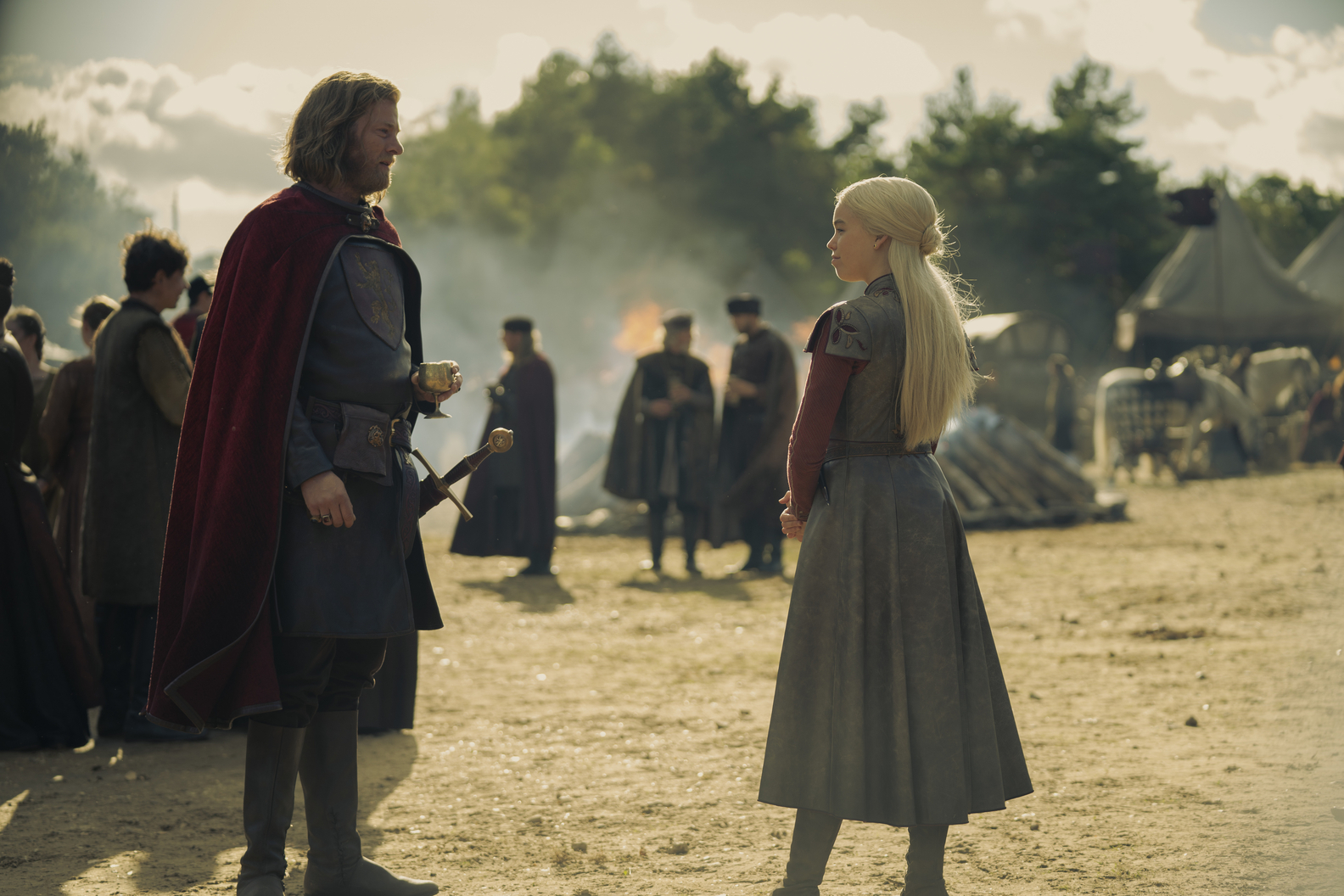 The long-haired Lannister twin Jason (that’s right, he’s simply…Jason) flirts with Rhaenyra. He’s considerably smoother tongued than his brother, and is direct about his intentions with the princess. Realizing now her father is putting her on the marriage market, she confronts Viserys. She asserts her independence and rejects his expectations. Otto as usual interrupts, this time with a report of a white stag.

Rhaenyra rides off in a huff, with her loyal knight Ser Criston in pursuit. It’s apparent from the familiarity that the two have developed trust over the past few years.

Jason Lannister presents Viserys with a hunting spear and discusses Rhaenyra with the king. He offends him with the presumption that the princess will be set aside in favor of her brother. But it’s what everyone is thinking. It’s true but he shouldn’t say it. (Meanwhile how good was Jefferson Hall at both of these roles? I like that he wasn’t ridiculously over the top in making them different. They were clearly separate characters, but they are brothers with different levels of confidence and different skill sets and it affects how they speak. So good.)

Otto proposes a suggestion that is much much worse (of course); that Rhaenyra marry her baby brother. See this is what happens when you have an impromptu small council meeting in the middle of a toddler birthday party. Nothing good.

Viserys mulls over the problems on his plate, and Lyonel Strong offers him another possible solution to the marriage issue: Rhaenyra should marry Corlys’ son Laenor. If he survives the battle at the Stepstones. 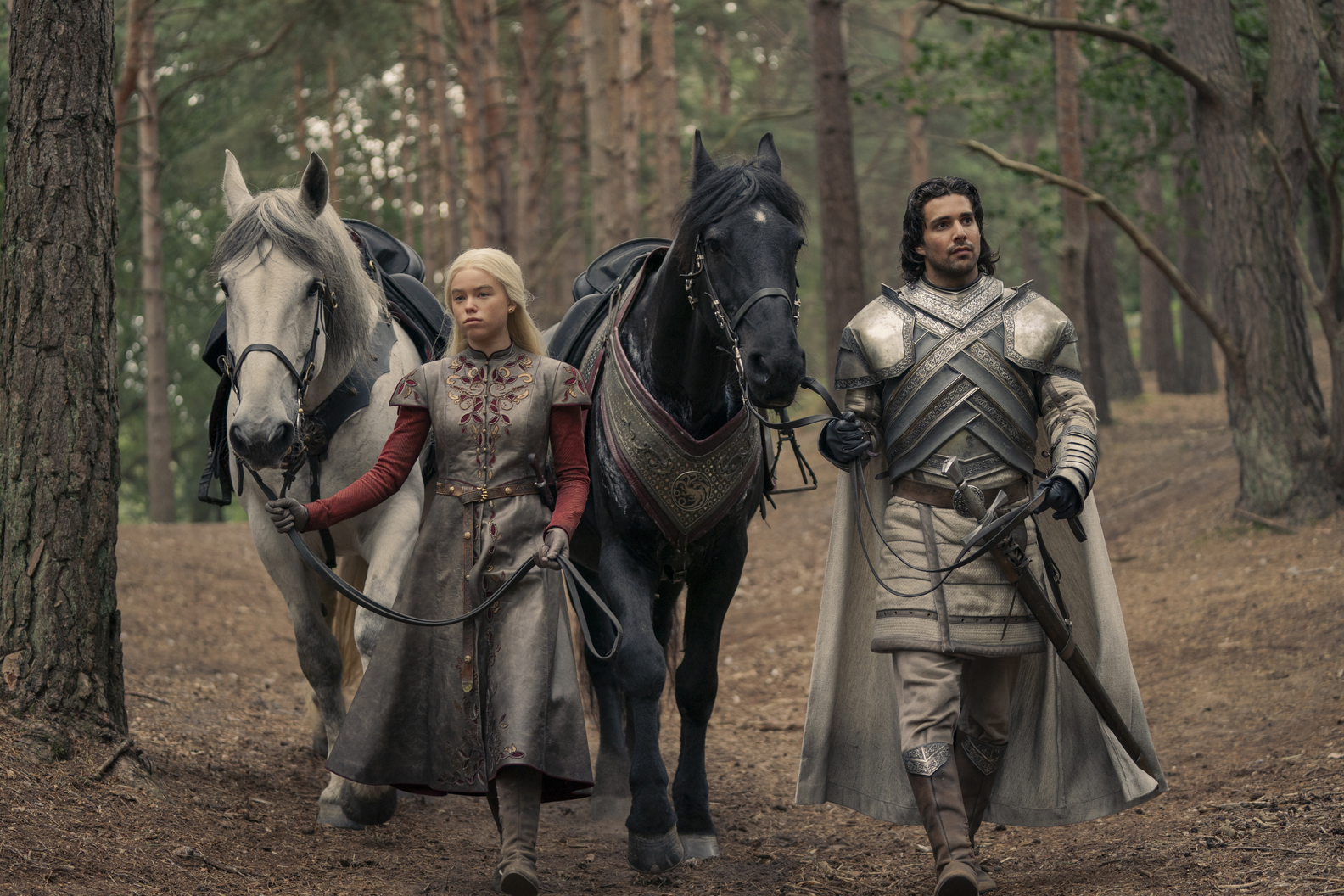 At night in the forest, a stubborn Rhaenyra refuses to return to the hunting camp. A boar attacks and Ser Criston stops it from killing her. Rhaenyra finishes the job with a stabby-stabby freakout Arya Stark would be proud of.

Viserys is still tormented by the decisions that lay behind and ahead of him. Visions and prophecies drove his choices, and contributed to his wife’s death. Now he’s uncertain and questioning what comes next. Alicent reassures her husband. 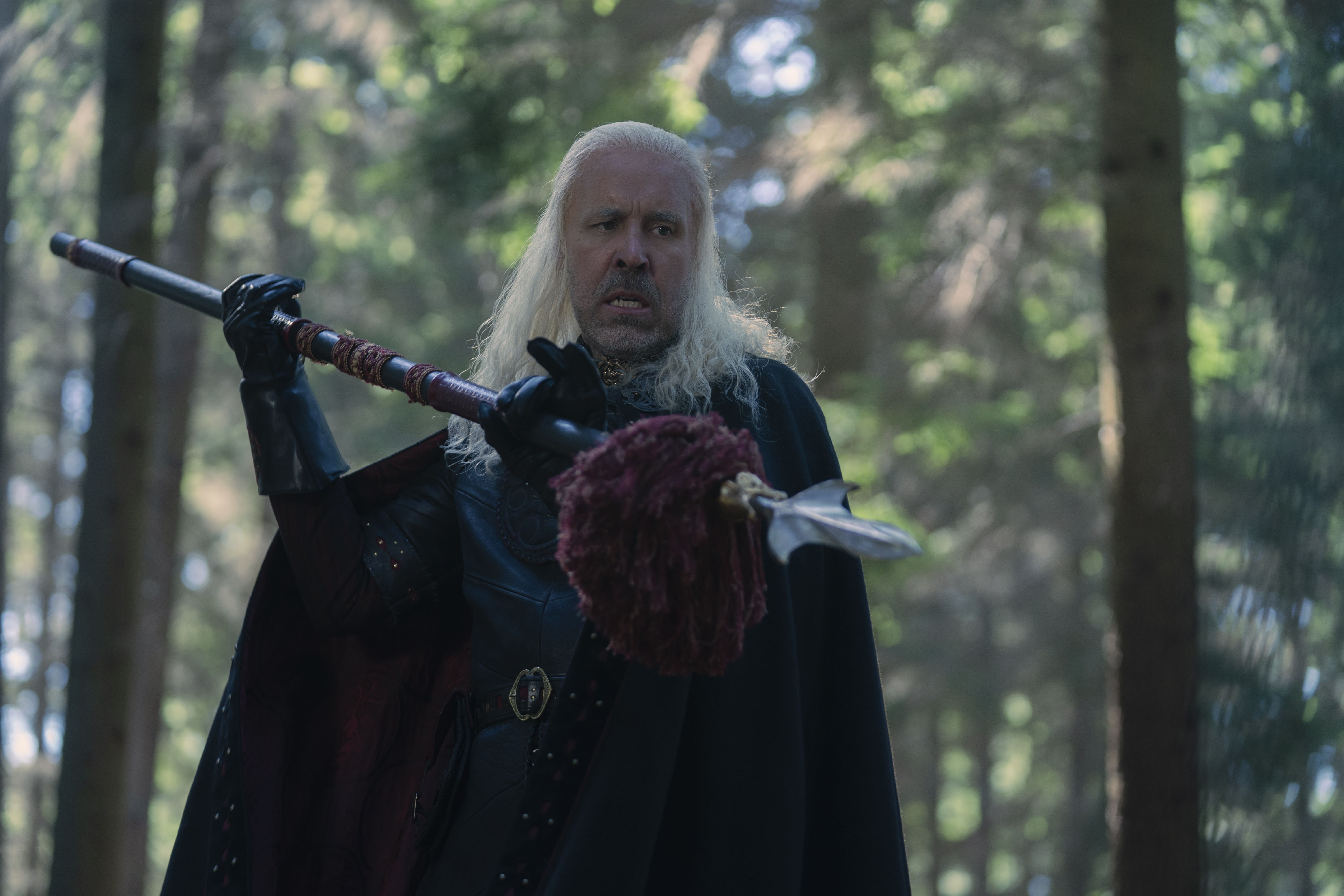 A hart is finally found but it’s not the fabled white hart the huntsmen promised. The common hart is brought before the king, and he makes a rather botched job of killing it, needing others to guide his hand far too much.

Returning to camp, Rhaenyra spies the white hart. Cole draws his sword, but she stops him, and lets the hart run free. The bloodied Rhaenyra rides back into camp with the carcass of her boar kill in tow, parading it before the men who would try to rule her.

After sitting on the pot for three years about his brother Daemon and the Stepstones war, it takes a gentle nudge from his smarter wife for Viserys to make a decision. He declares he will send help to Daemon. And despite their recent troubles, he affirms that Rhaenyra will remain his heir. 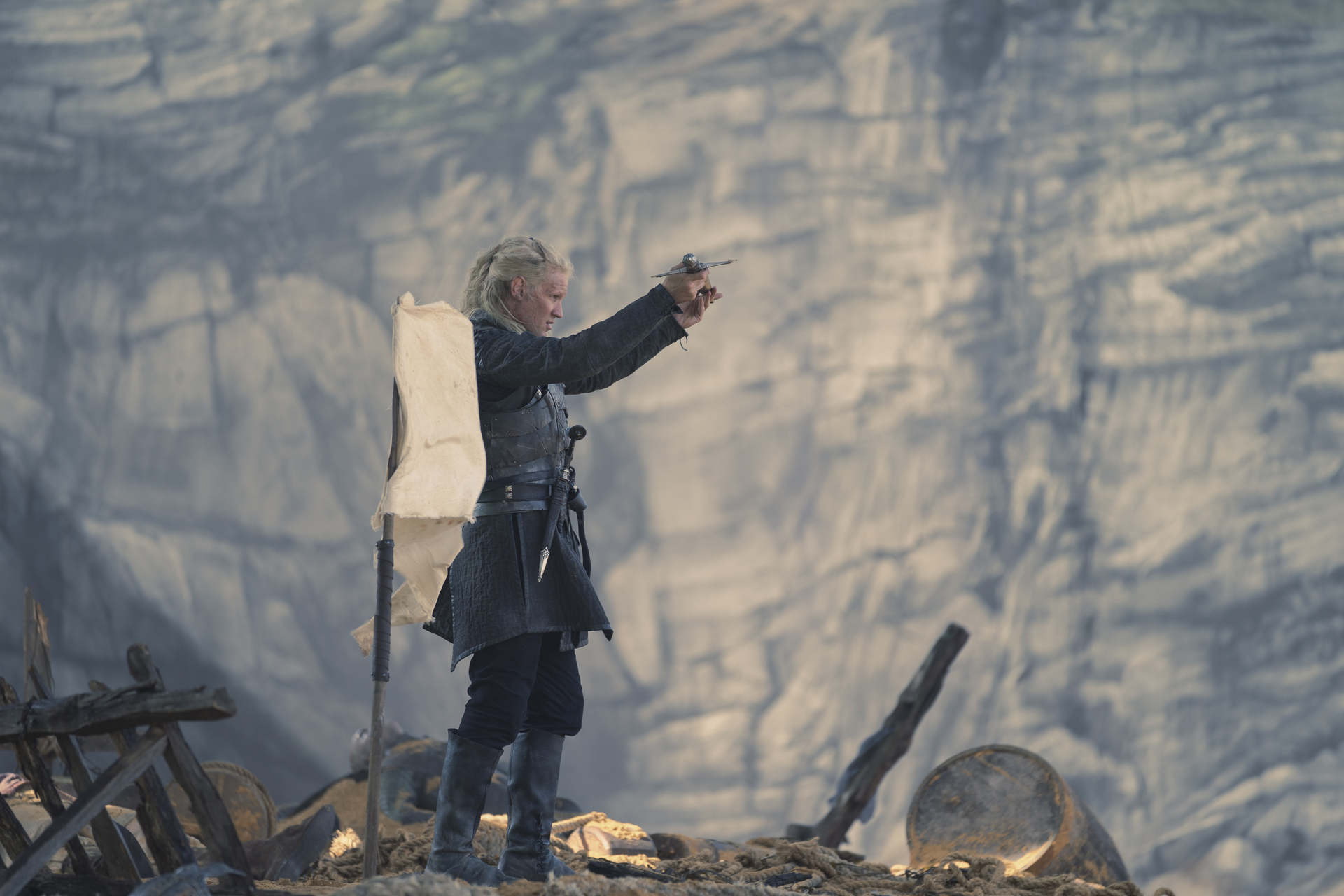 Tensions are getting to the Velaryon war effort. Despite having the most fabulous armor around, they aren’t winning. Viserys’ promise of help arrives and Daemon takes it like a true little brother, determined to win without him after three years of being ignored.

Daemon goes on a near-suicide run at the Crabfeeder, drawing him out with a false surrender before battling his way close to the enemy. He’s not zigzagging nearly enough. It’s stupid, it’s reckless but dammit it’s magnificent. He draws them all out and in, so the Velaryons can surround them and then young Laenor Velaryon on his dragon Seasmoke roasts the crab asses into oblivion.

The dragon-rider connection: When Daemon was hit, Caraxes screeched as if he were hit too, which was interesting. There’s a lot of theorizing about the physical and metaphysical connection between dragon and their chosen riders. HOTD has a chance to explore that more, featuring more beasts and more riders.

The Black Swan: Fun shout-out, slipping the Lady Johanna Swann origin story into the idle gossip of the party.

“fucking politicking:” it’s literally your job, my guy. What do you think a king does, Viserys? Sometimes he feels like a less decisive and less boorish Bobby B. Not well-suited to the job at all. Leave him alone in a castle somewhere with his prophecies and dragon minifigs.

And this is Jason: It will never not make me laugh my ass off that in a world of wild names like Jaehaerys, there will occasionally be some guy named Robert or Jon or….Jason. It’s made so much funnier by the fact that his twin brother is “Tyland.” Like their mother put a lot of effort into naming one of them and then passed out from the effort of giving birth to twins.

Building Up the Velaryons: I wish we’d gotten more build-up of Laenor somehow in the past couple episodes, even just a couple of moments, so there was a more emotional payoff in seeing him show up on Seasmoke. We glimpsed him in the tourney seat as a child, and then he appears here played by a different actor so a casual fan may not realize it’s the same character.  The spectacle was undeniable but I want more than spectacle from HOTD. The dragons and fire should serve the story, not the other way around. The final scene was cool, I enjoyed it, but it could’ve had more impact if we had a little more bonding time with Laenor and Seasmoke. With Lyonel Strong pulling for a Laenor-Rhaenyra alliance, hopefully we’ll see more of that soon.

Velaryons! Strongs! Lannisters! Oh my! How excited am I to see more families join the fray! Targaryens are fun but variety is the spice of life and Westeros.

The costumes: next year’s Emmys are already won because the armor alone is so incredibly well-designed and beautiful. The costumes are all so smart and interesting and thoughtfully done.

That poor schmuck stomped by Caraxes: Run with the dragons, and there’s bound to be collateral damage. Rough way to go out by any standards. Still better than crabs, I guess.