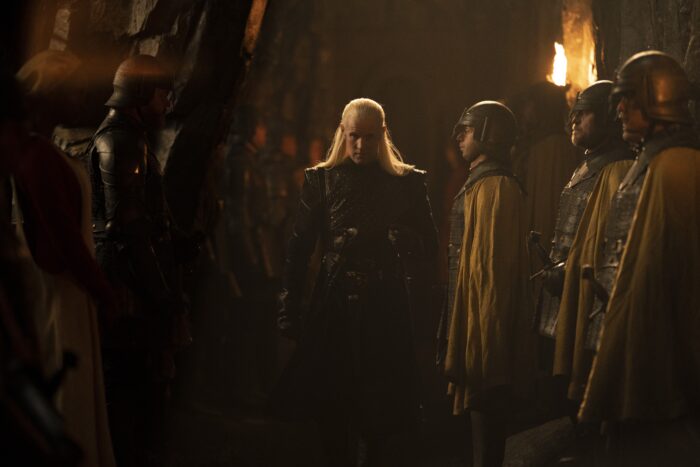 Tensions mount in the second episode, as the decision to name Rhaenyra the heir has some not so unforeseen consequences. Viserys’ daughter struggles to find her feet as the future Queen of Westeros, his brother attempts to assert his strength on Dragonstone, his Hand’s daughter makes herself a tempting option for his new wife, and his enemies wreak havoc on the Stepstones. While Viserys plays with his model of Valyria and ignores the very real problems facing his reign, let’s dive deeper into “The Rogue Prince” with some interviews and videos! 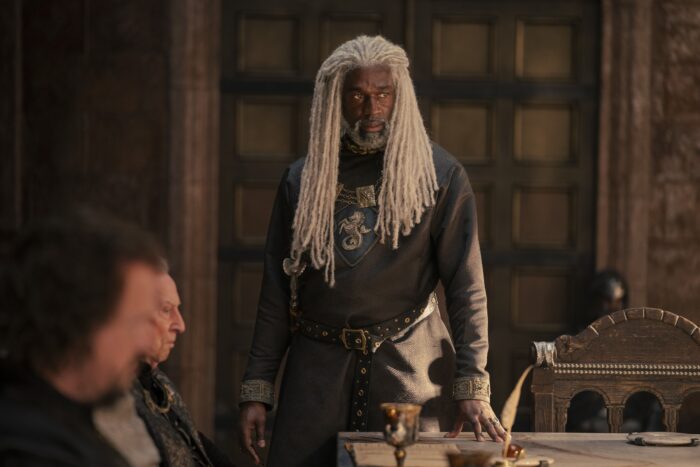 One of the characters who tries to get Viserys to face reality is Corlys Velaryon, to no avail. Steve Toussaint speaks to Newsweek about Corlys’ decision to enlist Daemon’s (Matt Smith) help. “I think Corlys is a guy who’s very pragmatic, something has to be done. So at beginning of that episode, of course, he comes in and says, ‘Look, I’ve lost ships now. This is ridiculous, but what are we going to do about it?’ And as far as he is concerned the council, the king, and Otto were just dithering about. So I think it’s in his nature to just go ‘well, I could sit around and wait for you and just lose more men or I just go with another man of action and we just do this together.'”

That “man of action” turns out to be the king’s brother. As Toussaint explains, “I really enjoyed shooting that scene with Matt [Smith], because it tells you so much about both of them in a way and also the fact that Corlys…does know how to play people. I can’t remember the line now but I think there’s something I say, something like ‘their fortunes were given to them our fortunes have to be made,’ appealing to the vanity of Daemon, knowing that would work.”

He adds, “I think Daemon is also a very interesting character because he’s very dangerous, he just goes his own way. And what I like about Corlys is that I don’t know that there are many other people in court who would have gone to Daemon with this proposition, so, yeah, I like Corlys for what he did, for his actions there, getting something done basically.” 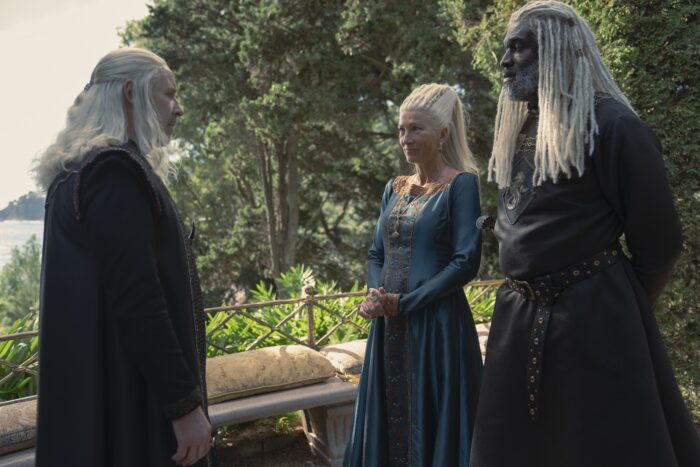 In a separate interview with The New York Times, Toussaint discusses Corlys’ focus on his family and legacy. “When I had the initial meeting with Ryan [Condal] and Miguel [Sapochnik], the co-showrunners, all we talked about, really, was fatherhood and his feelings about his family. He’s got this desire to cement the Velaryon name in history. He feels the slights to his wife [Princess Rhaenys, played by Eve Best], the fact that she was passed over [for the Iron Throne], more than she does. And when he’s realized he can’t get her back on the throne, the next thing for him is get the family as close to power as possible, i.e. marry off the kids in some way or other.”

His efforts to cement a marriage alliance with King Viserys are in vain, however, and Toussaint expresses the frustration Corlys feels dealing with him as well as the other members of the Small Council. “The resentment that Corlys has for what he considers these privileged people helps me a lot. In fact, there were some points where Ryan would have to rein me in and go: ‘If you spoke to the king like that, you’d have your head cut off. You’ve gone too far.’ He adds, “There is a side to him that is, as far as he’s concerned, above the rules. Also, he knows just how valuable he is for the realm, because he controls the majority of the navy. So he knows he’s got a little bit more leeway.”

For more on Corlys’ ambition and how Toussaint is handling the continuing backlash about his casting, check out both articles here and here. 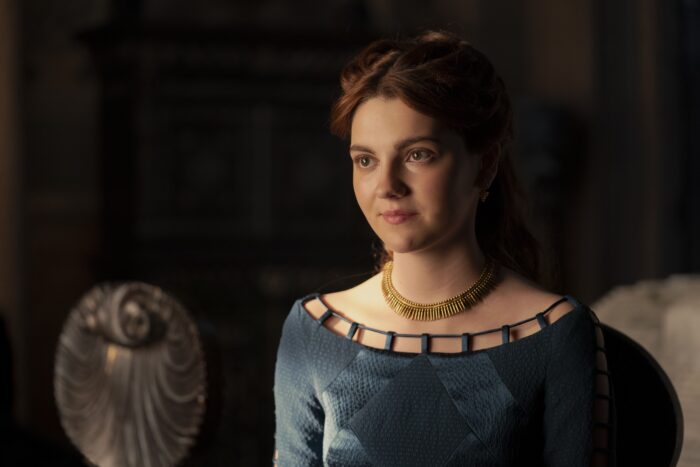 Speaking of marriage alliances, Viserys shocked the Small Council – not to mention his daughter – by announcing his intention to marry Lady Alicent Hightower (Emily Carey). In an interview with EW, Carey expresses her relief that she no longer has to keep the impending union a secret. “I’m so glad I can talk about this now. This is a big one. It changes one of the branches of the show, if that makes sense. It pushes things in a different direction. And for my character it’s, of course, a massive turn.”

Discussing how she wanted approach her scenes with Paddy Considine (Viserys), Carey admits she was unsure what direction to take. “I was confused as an actor in not knowing what Alicent should be feeling, and then I also realized that’s exactly how she’s feeling. ‘I should be happy. This should be what I want, but is it actually what I want?'” She goes on to add that if viewers are tempted to see Alicent as a villain, remember that these are “huge pressures that should not be placed on 14-year-old girls.”

Finally, Carey – who identifies as queer – addresses the romantic undertones in the relationship between Alicent and Rhaenyra, saying that there’s a “tactile closeness and this emotional vulnerability [between teen girls] that you share with one another, it’s almost like having a partner. You want to be with that person all the time…You just want to love that person so deeply, and you think your best friend of 14 is going to be your best friend for the rest of your life. It does toe the line between platonic and romantic. But I also think, at 14, you don’t know what those words mean. You don’t know what the feelings mean. It’s just love. That’s all it is. Whether it’s friendship or more than that, I think it’s up to how you want to see it, but it was talked about for sure.”

Be sure to read the rest – including Carey’s and Considine’s shared love of Drag Race – over at EW.

We’ve seen surprisingly few of the dragons so far, but rest assured more are coming. Speaking with Wired, showrunners Ryan Condal and Miguel Sapochnik share how they approached bringing all 17 dragons to life for the small screen. “With our dragons, you can get the animation, the things that they touch, and how they interact with the real objects, like the ground they stepped on and left footprints. Those kinds of things, you can get that right…But what you want are details that you wouldn’t otherwise notice and would in any normal situation be considered a luxury that you don’t have time for,” Sapochnik says.

He continues, “For example, there are flies on the dragons. That’s what we’ve been focusing on because these are smelly, big creatures, and smelly, big creatures usually attract flies. By having flies, and seeing those little darting shapes that are going around the dragons, it gives you a sense that there’s something more real about this dragon than meets the eye.” It’s a shame we still don’t know exactly what these creatures smell like…

Condal adds that there was a heavy focus on making each dragon unique. “I think we tried to imbue them all with a distinct sense of personality and place within the story, because dragons are a fact of life in this world. They’ve existed for centuries. They’re different ages and sizes and shapes and silhouettes and colors. It was really important to George [R.R. Martin] that we did that, because he envisioned his dragons being very colorful, like bearded dragons and the very colorful lizards that you can see in our biosphere.”

“The biggest dragon is so big that her horns have started to fall off. She looks old, and she has evidence of former saddles on her because people had to re-saddle her as she grew and grew. Some of the old saddles, they just put a new saddle on top of the old. Other dragons are young and juvenile and still learning the world. They’re more curious, like the velociraptors in Jurassic Park. Daemon’s dragon is very cantankerous and twitchy and never stops moving, kind of like his rider.” Given the number of dragons we will eventually see, it’s nice to know we’ll be able to differentiate them by their appearance.

The entire interview is available here.

In case you missed it, here is the preview for episode three: