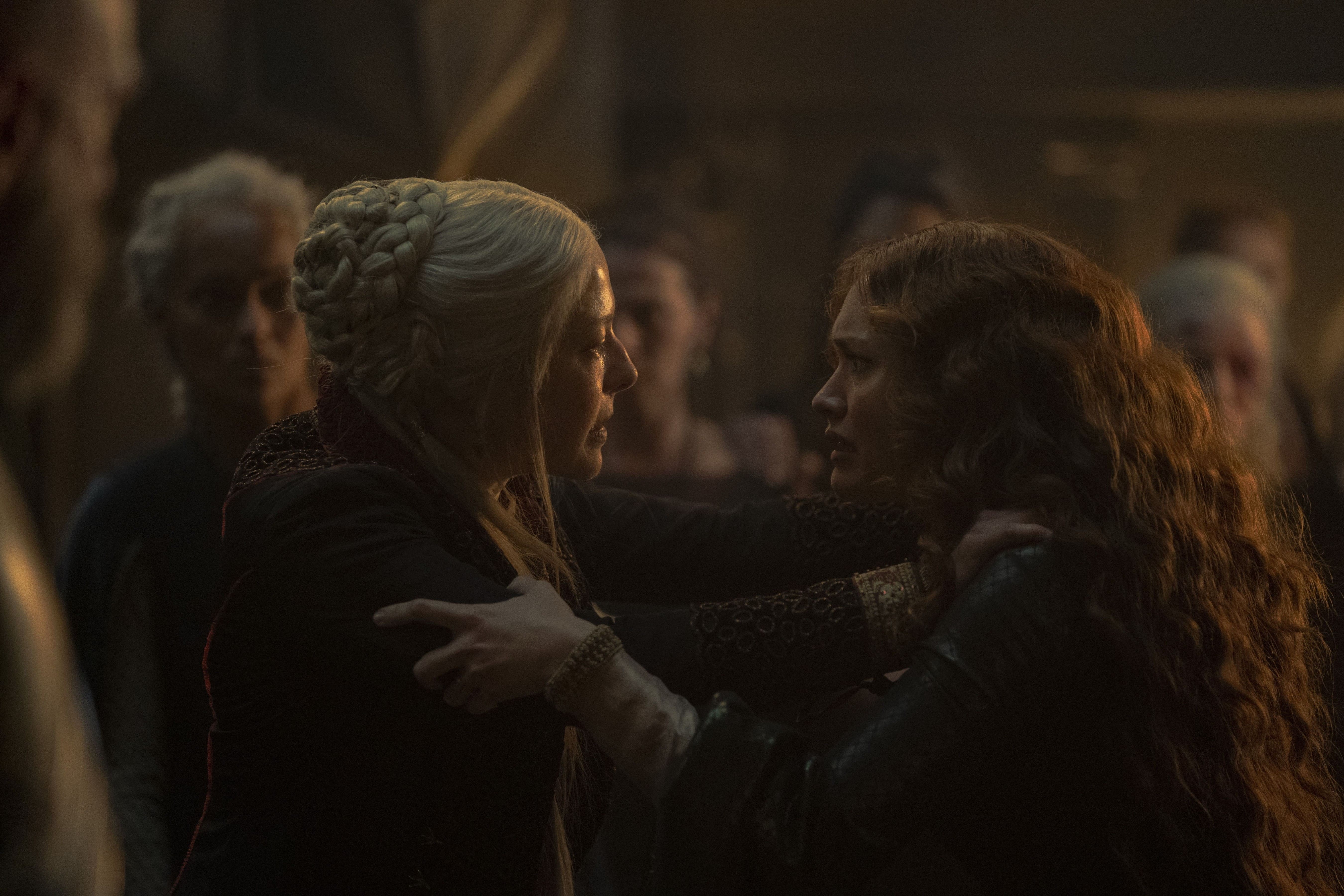 And you thought your breakups got ugly. 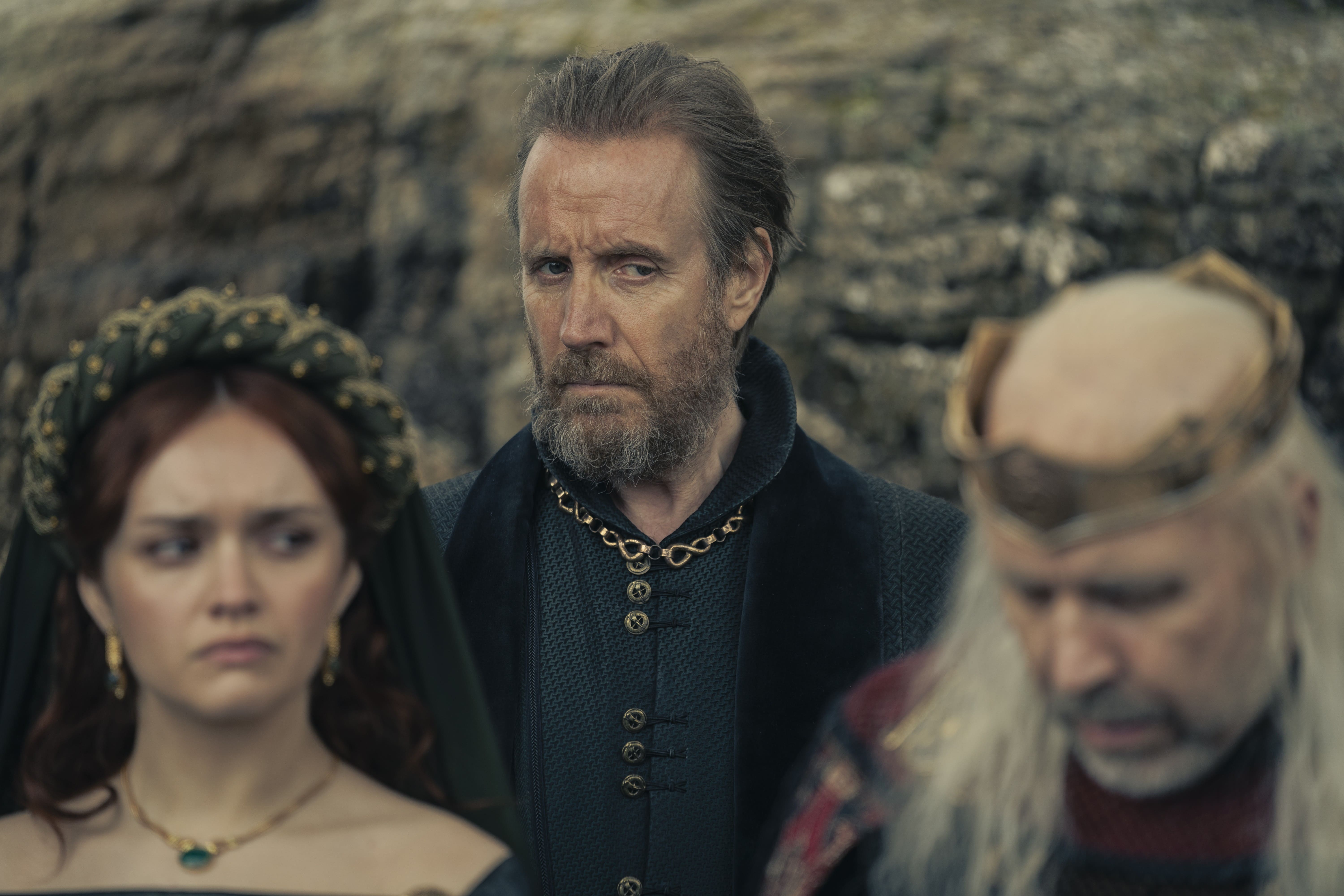 After the devastating events of last week’s episode, Houses Velaryon and Targaryen and friends gather on Driftmark (home to High Tide, seat of the Velaryons) for Laena’s funeral at sea. Otto Hightower is back in action, restored to his role as the Hand since the fire wiped out Lyonel Strong. After a lovely Valyrian eulogy  from Ser Vaemond, the families mingle. Helaena’s a charming bug kid, Aegon is grossed out by his sister/future wife, and Jace and Luke (Rhaenyra’s boys) are sad about the whole affair. Daemon and Viserys have another tense reunion. Larys Strong watches it all happen, with the new confidence that comes from bumping off your family to climb the chaos ladder.

Laenor wallows in his grief over his sister quite literally, until Corlys sends his son’s boyfriend Qarl to fetch him out of the sea. Toxic masculinity is no one’s friend, Sea Snake. 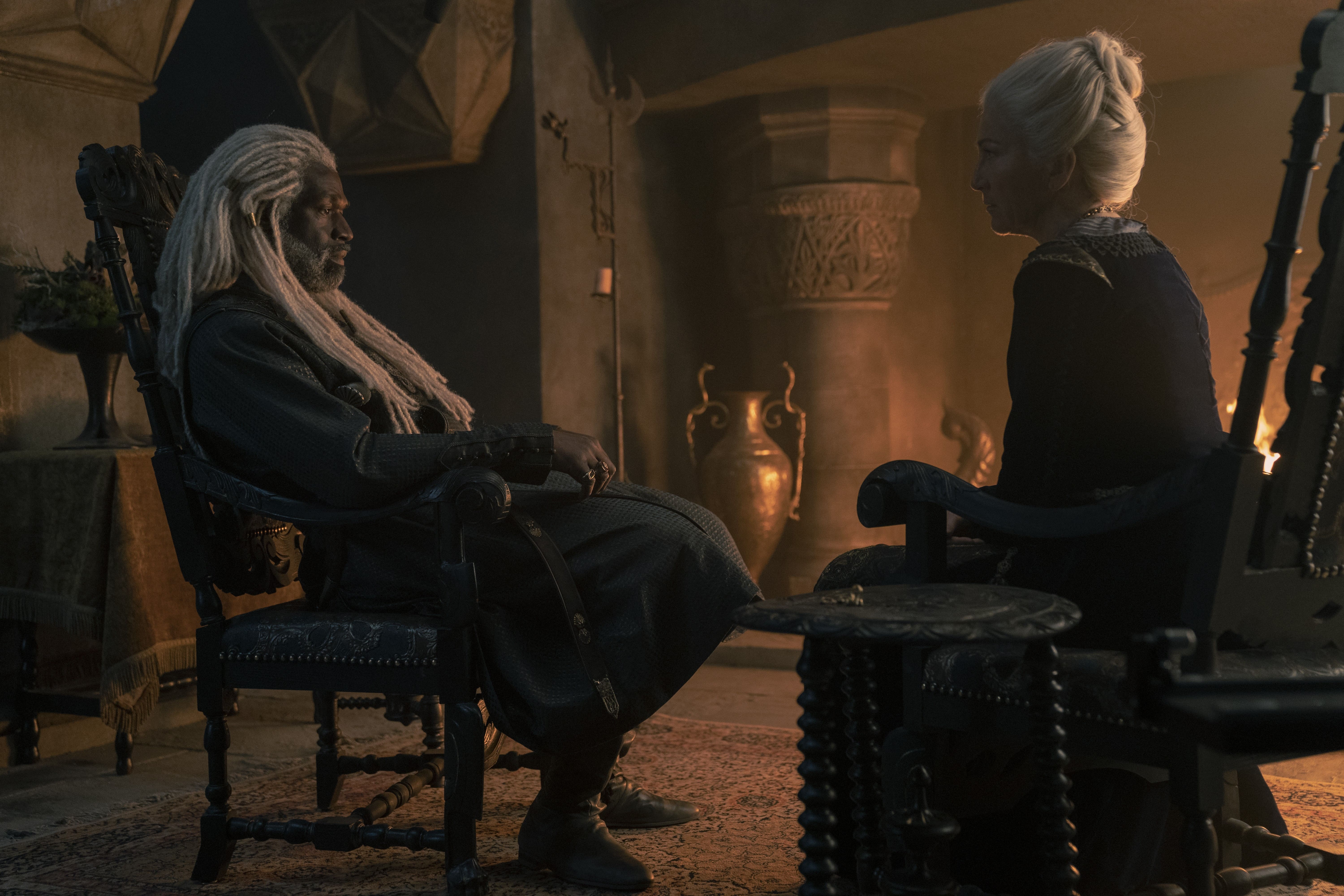 Rhaenys and Corlys mull over their loss. She challenges her husband and his persistent questions about the throne, calling out his ambition. She proposes changing the inheritance of their home to Baela, away from Rhaenyra’s son who is obviously not a Velaryon by blood. Corlys rejects this.

At night (which is totally filmed in the day and then tinted gray, c’mon it looks weird), Rhaenyra and Daemon go for a romantic walk and get caught up. They make love. It’s emotional. (I think. It was hard to see.)

Somewhere else at night (hopefully not too close to the sex tent), young Aemond seeks out the dragon Vhagar who has just lost its dragonrider in Laena. The boy makes a few tentative passes, but finally mounts the massive Vhagar. He barely survives the ride,  which is more or less like joyriding a 747 while being crouched on the roof. 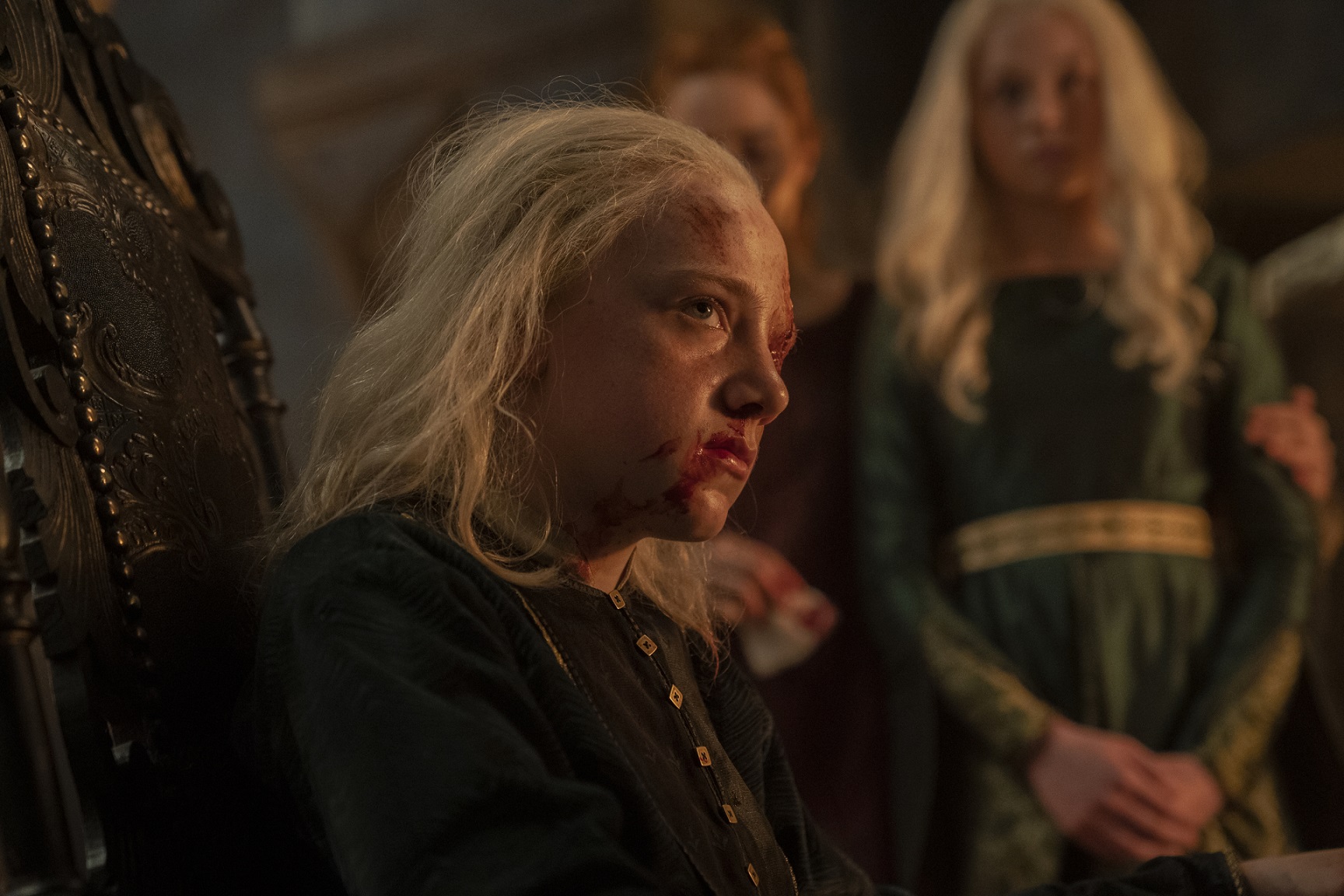 Aemond reveals his success to cousins. The kids have a straight-up rumble with name-calling and accusations of dragon theft. They fight dirty, like real kids do. Luke ends it by slicing Aemond’s eye, making Helaena’s prophecy from last week come true.

All hell breaks loose when the adults finally show up and find a maimed prince. Aemond is questioned about the bastard rumor, and carefully avoids giving up his mother, blaming Aegon instead. Viserys is fed up with everyone and everything, but doesn’t take any decisive action once again. His queen Alicent demands a very literal eye for an eye. 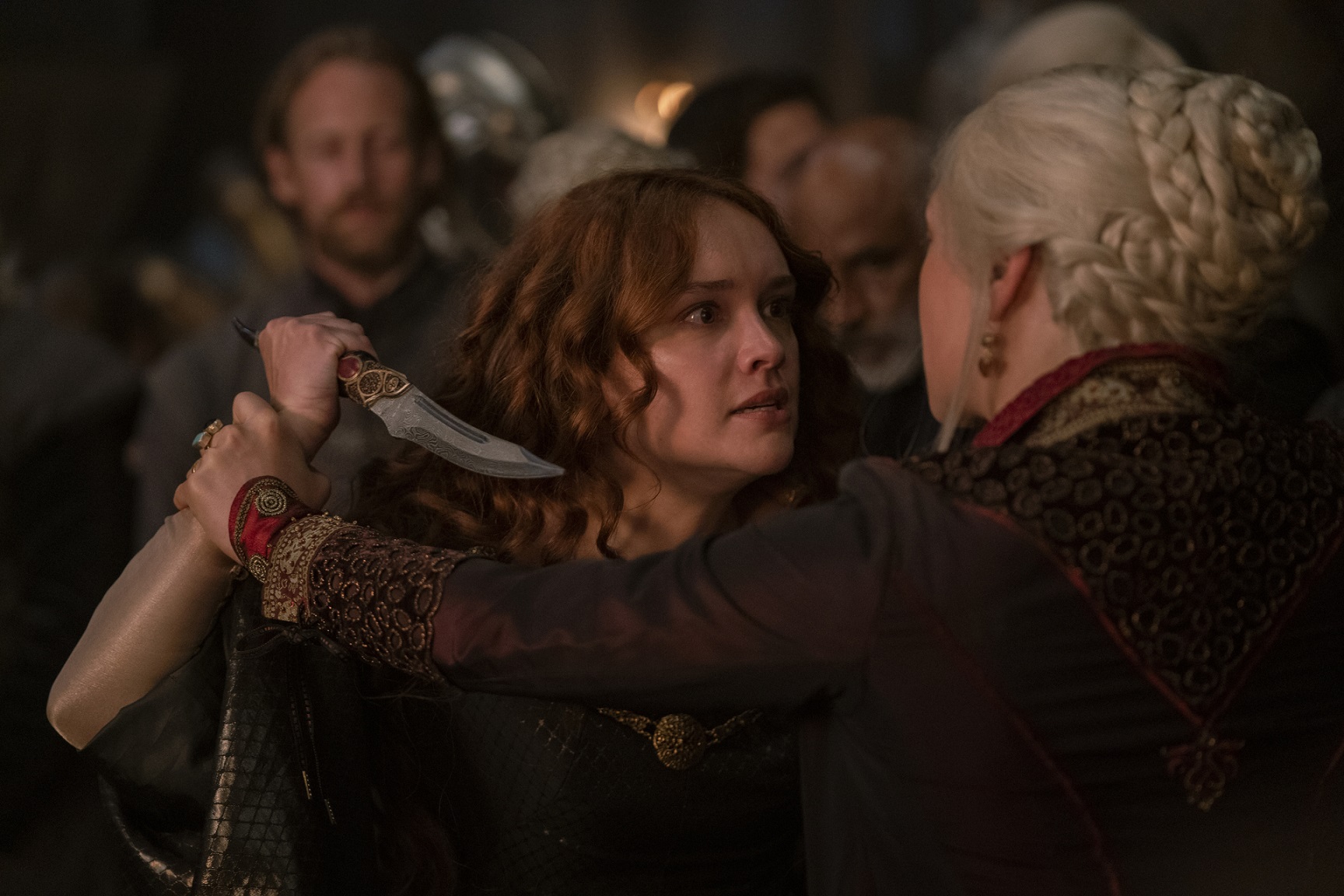 Everyone refuses to cooperate because that’s a totally insane thing to ask for.

Alicent snaps, grabs her husband’s Catspaw dagger, and tries to attack the boy who took her son’s eye. Rhaenyra blocks the way, and the women grapple for a moment while Alicent rants. It’s clear that Alicent resents the freedom Rhaenyra has enjoyed, and the queen isn’t happy with her own choices and sacrifices. Rhaenyra is sliced deep in the scuffle but it ends without more loss.

Aemond announces he gained a dragon, and so the loss of his eye is a fair enough exchange (maybe should’ve told the adults about it sooner, you lil shit). 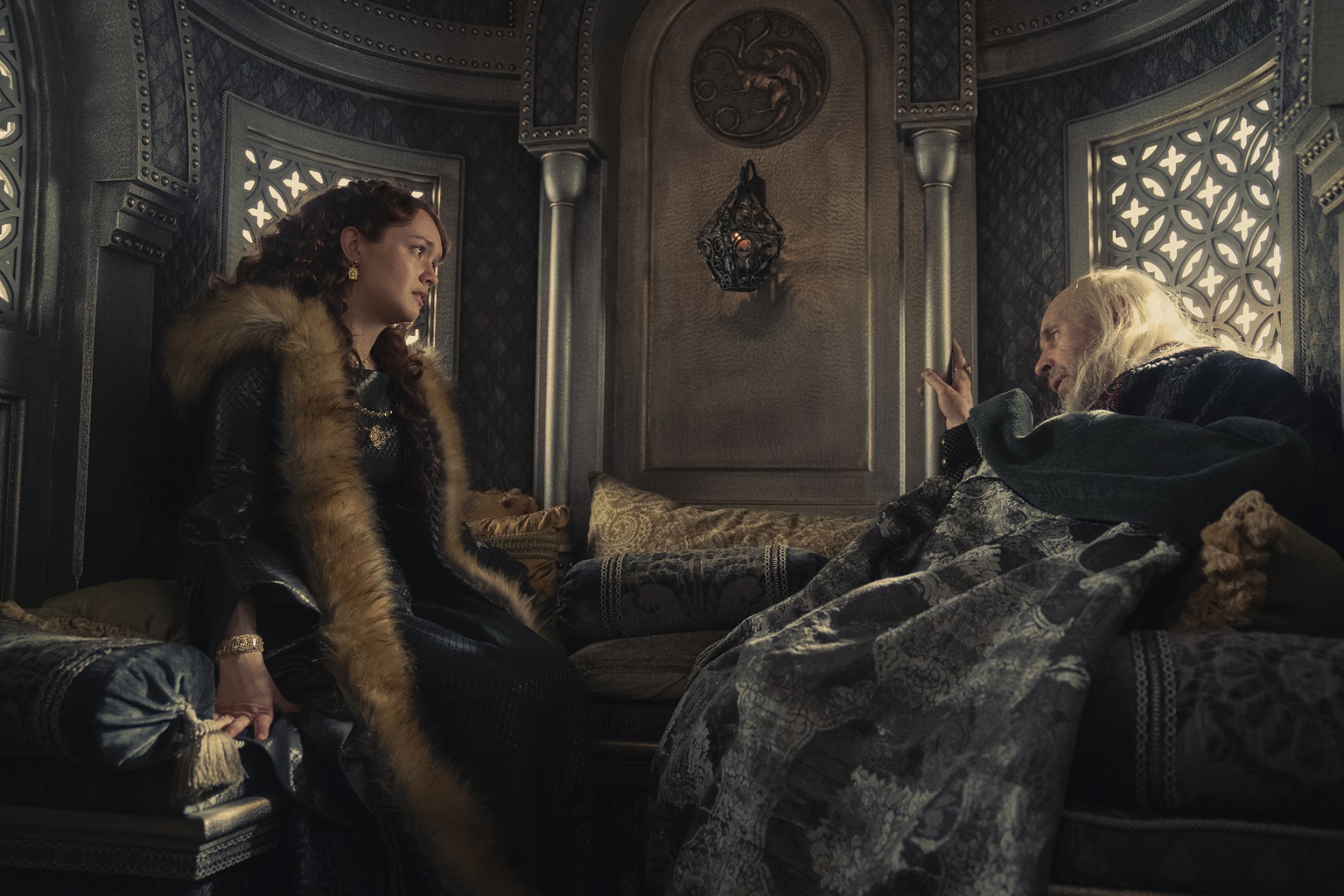 In private, Otto Hightower is firmly back on his bullshit, applauding his daughter’s fierceness. He didn’t know she had it in her.

Laenor and Rhaenyra have an honest conversation about their life and marriage. He recommits himself to her and the children, while admitting he hasn’t done enough.

Alicent and Viserys head back to King’s Landing but the king is clearly unwell. The children go with them, along with the dragon Vhagar. Larys stokes Alicent’s ire, and offers his assistance once more; this time she clearly accepts his services and it seems, her role in the game.

Rhaenyra proposes to Daemon lovingly, which seems like bad news for her already-existing husband Laenor. Oh dear. Daemon pays off Ser Qarl, who we see dramatically challenging his boyfriend to a fight before the scene cuts away. Afterward, Corlys and Rhaenys rage in grief for another child- they’ve discovered Laenor’s burnt body in the fireplace. 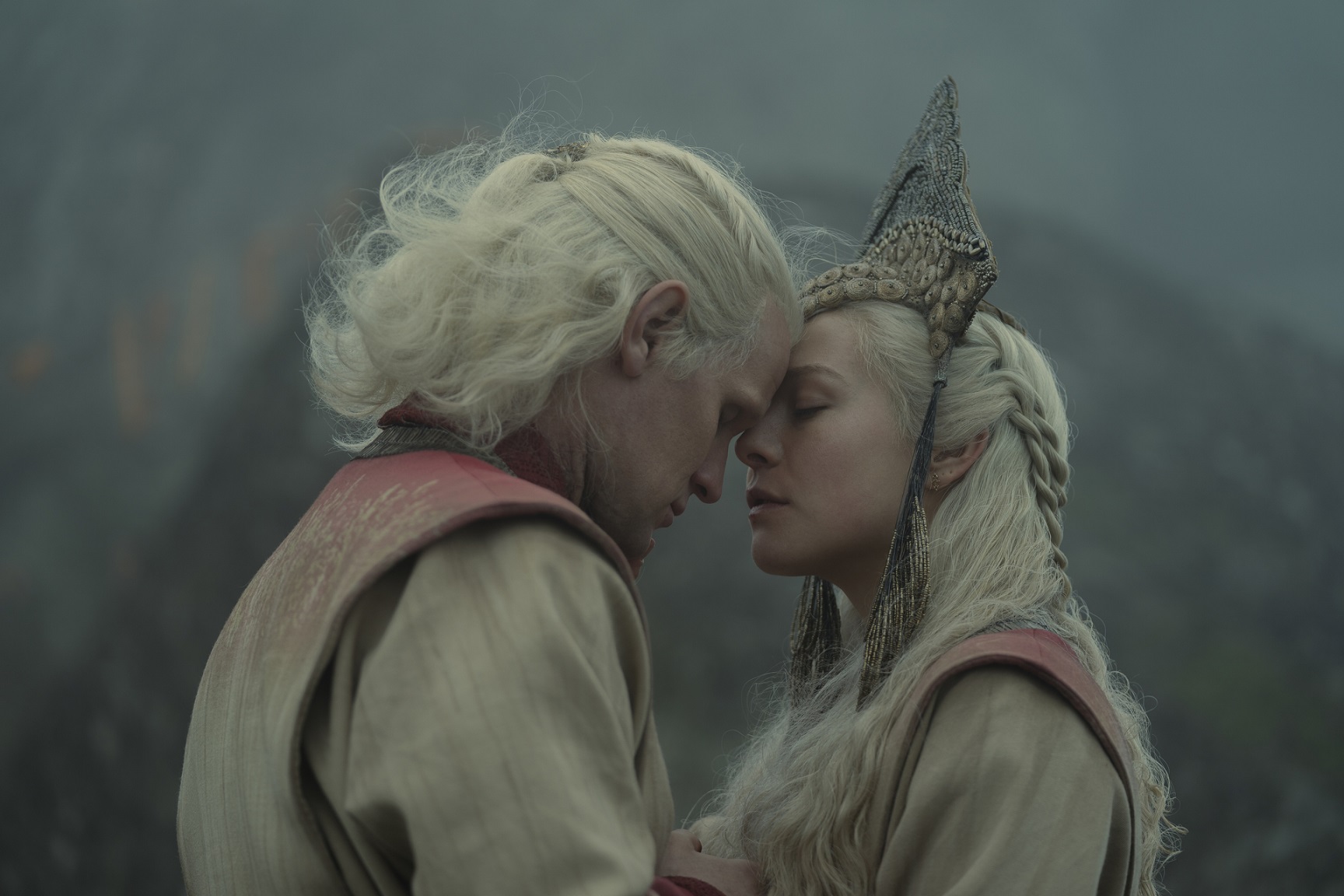 Rhaenyra and Daemon marry with Baela, Rhaena and her boys as witnesses in an intimate Fire-and-Bloody ceremony. It makes sense- Westeros weddings always have a body count. Or do they?

Ser Qarl escapes Driftmark in a boat…with a newly head shaved LAENOR!…biiiiitch he faked his death for FREEEDOM. As Rhaenyra mentioned earlier, the sea is an escape. It’s Laenor’s escape from a life not meant for him, and now Rhaenyra and Daemon can forge a future together. 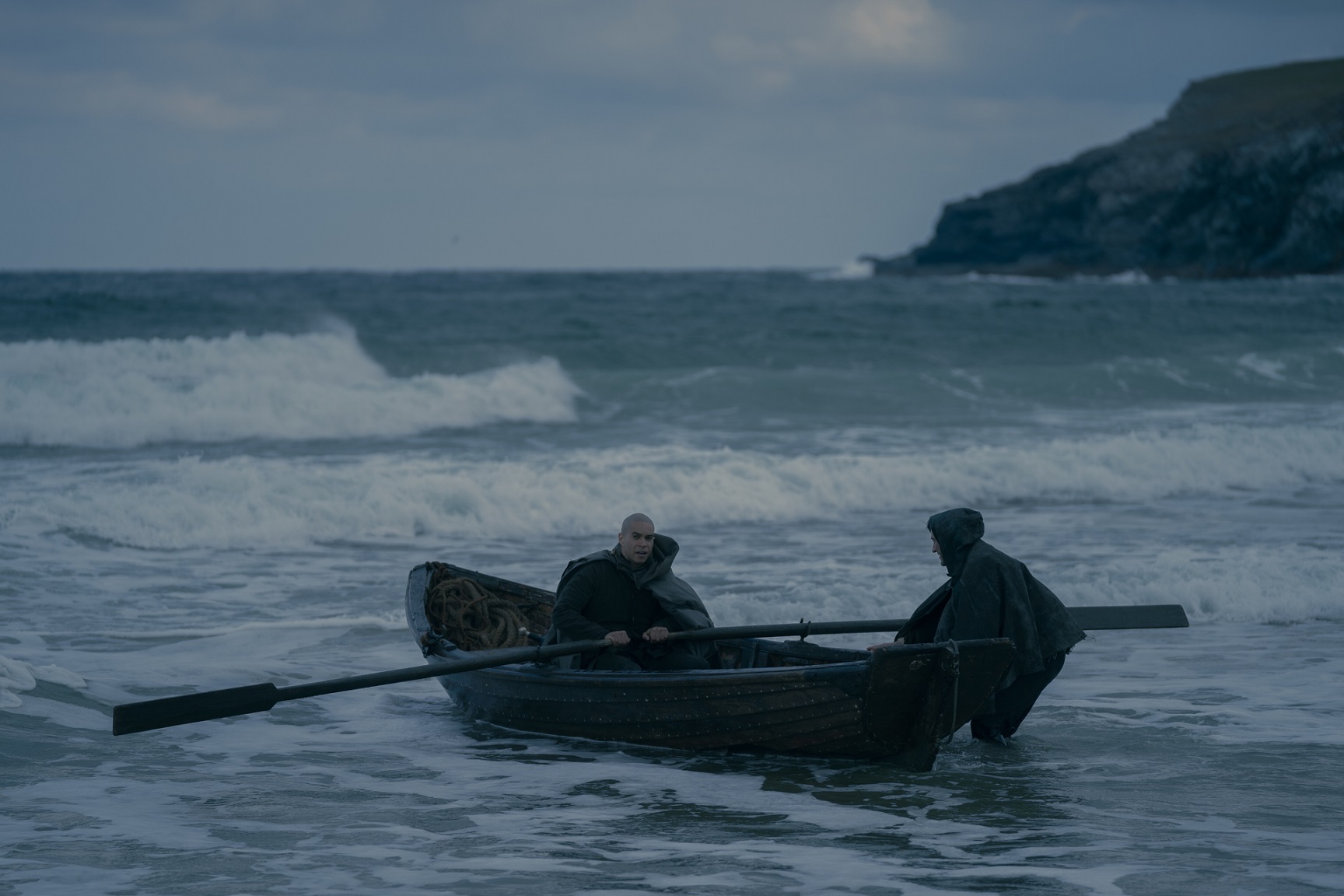 The Kids are Alright: Actually they’re great. Best scenes of the episode are easily the ones centered on the children. Kid can be so awful and nasty but also so full of heart. Leo Ashton (Aemond) is such a star. And we’re in for another time jump next week so we’re saying goodbye to them this week. Give it up for the kids!

Let’s do the Time Warp Again: The dizzying speed of the season is a bit much. I can’t figure out why the writers are in such a rush. I know, you want to do the Dance, but you’ll get there eventually. Constant time jumps make it hard for people to connect with the characters and develop a relationship with them. I won’t nitpick why some actors age and why some are recast, but it’s weird and confusing. At the end of the day, it’s about telling a good story with interesting characters, and jumping around all over feels like the writers are wasting a ton of great material. (I wasn’t here the last two weeks, due to work and vacation, so this is a cumulative observation of the past few episodes, really.) I think we’re going to see a lot of good (and some probably bad) articles and discussions at the end of the season, speculating on how the season might have been split into chunks differently.

Playing with History: One of the neat things about Fire and Blood the book is that it’s a subjective history told by maesters (and a fool) so it can be wrong at any time. And that’s why it’s absolutely fair play for Laenor to be plot-twist-ALIVE and on his way to more chill parts.

Alicent Snaps: About time, too. She is so jealous of Rhaenyra’s freedom, she seethes with it. It’s a relief to see Alicent begin to own her feelings and take active steps. There’s no fun in seeing someone used by their father and manipulated by a creep like Larys. Alicent is the queen of greens, and she’s finally stepping up.

The Curse of Grayscale: And by that I mean the heavy amount of grayness they tried to pass off as night in this episode. I’m one of the people who actually didn’t have a visual problem with GoT‘s ‘The Long Night” or other dark episodes (gotta good TV with nice settings, I guess). I did not like how this episode looked in those “night” scenes. I would rather they just set the Rhae/Dae scene in the daytime. I can see in a dragonriding scene THAT long why they would want to hide some of it with nighttime coloring, so I’m a little more forgiving.

Laenor Velaryon….NOT. Good luck in Essos! Invest in some hair dye (go blue, live it up), and have fun.

That one guard though: Suppose he had to be sacrificed for the plan to work. RIP to you, my guy.

Aemond’s eyeball: OUCH. Fuck. I have a thing about eyes.